After some discussion on the reflector I decided to make an antenna for 80m and needed a summit to try it on. By pure luck I chose a glorious day with non-stop sunshine and barely any wind which was surprising considering how windy it had been the days before. I chose Birks Fell starting in Litton which is a 26 mile drive from home in Ilkley. After dropping my daughter off at school I was parked outside the Queen’s Head at 08.45z and on my way. 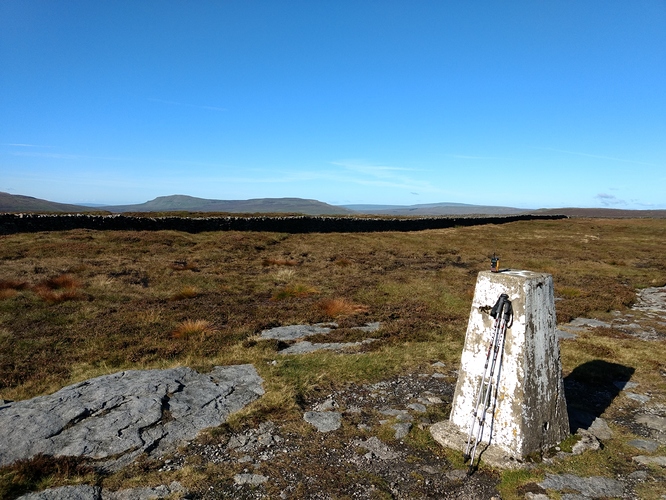 The trig point is not actually the summit although it is in the activation zone which is huge. I carried on west to find the true summit but found it wasn’t accessible without climbing a wall - although if I’d carried on further perhaps there was a stile. So I found a cairn on a lump to set up my station. 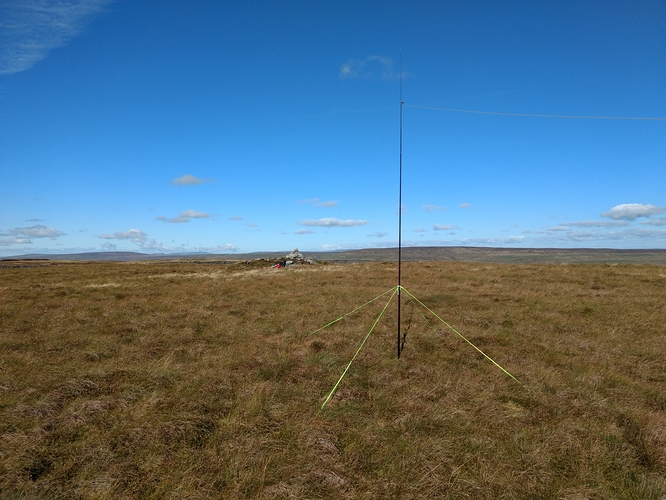 I saw that Allan GW4VPX/P was on 2m FM on Tryfan and so I set up my slim jim in the hope of an S2S. I couldn’t hear anything on the band and the FT817 complained of high SWR so clearly that antenna has finally failed. I’ve been meaning to replace it ever since I made it in a rush last year. Now I really will have to deal with it.

A switch to 40m CW brought in 11 contacts including 3 Swiss S2S.Next it was 20m CW with another 11 contacts, but no S2S. When the contacts slowed down I kept saying to myself “One more CQ and then I’ll stop” and then I’d be called again! So a few more CQs and the same happened.

So, overall, a good day’s SOTAing with 27 contacts. 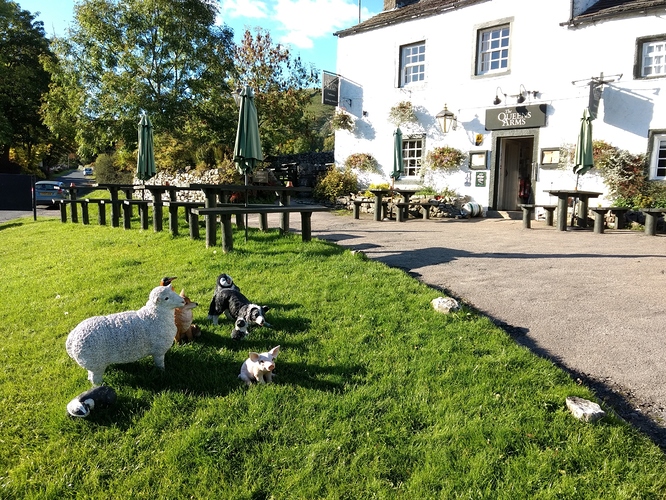 A nice day on Long Mountain GW/MW-026 as well, but not such open views… 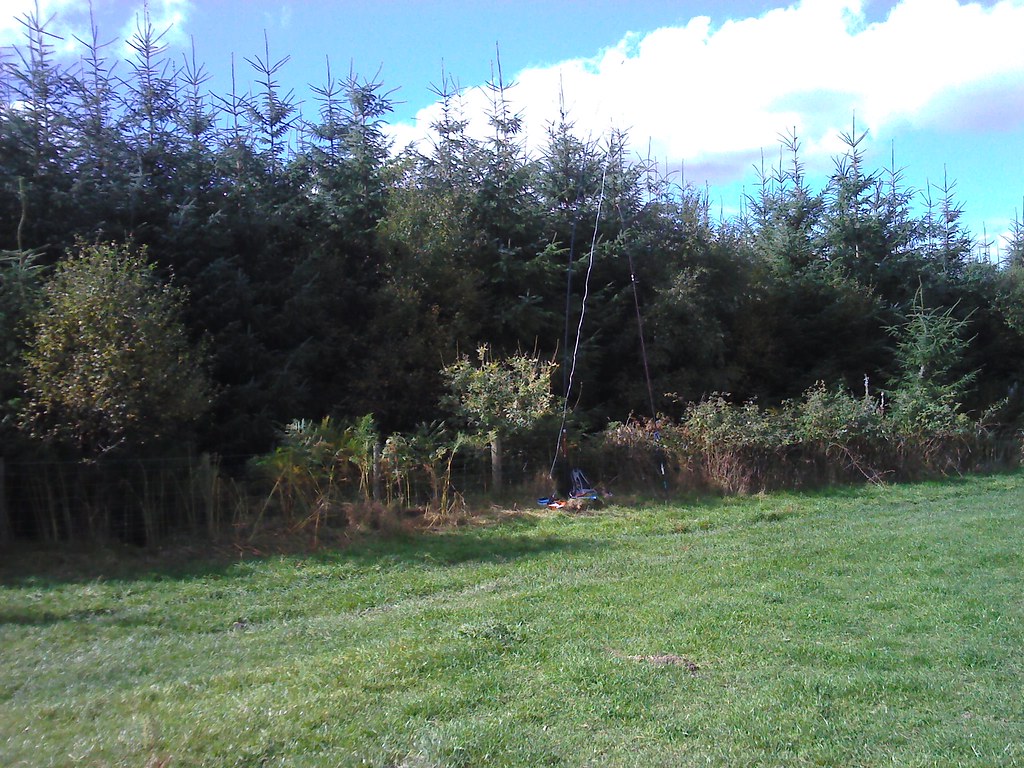 As you’d planned Richard, you managed some contacts on 80m!
Perfect WX and an unusual antenna system that works with 5W. Your total of 27 QSO’s with QRP is very creditable.

If you want to activate from the SOTA grid ref, you can go up from Redmire though it’s not as straightforward and it’s steeper.

As an aside, before 2007 we used to activate from the officially highest point (another trig) which is Horse Head Moor G/NP-021. Just why I’ll never know; Birks has always been higher on any map I’ve ever owned, old and new but the error was not that of the SOTA organisation.

What rich colours in your photos compared to mine the day before.
I’m very envious of your home QTH; very handy for NP’s. I drove through Ilkley on Thursday and what pleasurable memories I have from climbing on the Cow & Calf as a kid in the late 1950’s. They were covered with carved initials and names back then and no doubt still are.

Thanks for your report,
73, John

(Adrian: You found a mountain with trees!)

Hi John
On my Outdoor Leisure map dated 1995 it shows the Horse Head moor trig point as 605m, Old Cote Moor Top trig as 607m, Birks Fell 608m but Sugar Loaf as 609m. So Horse Head Moor trig point was in the activation zone of the highest point according to that map. Neither trig is the highest point on the old or new maps but was/is in the relevant activation zone.
73 Richard

Mine too but there are no spot heights near the 605 trig point to say where the highest point is on HH. As far as I know (from my old NP21 HH GPS routes), the SOTA site gave the NP21 grid ref as SD 887 780 but I can’t prove it because it’s been deleted from SOTA. Also my old log sheets for HH NP21 had 609m in the header which I must have copied from the SOTA summit info at the time. It would have been based on the Marilyn given in the Relative Hills of Britain Book. SD 887 780 is the 605 trig or near enough so I could never understand why, all along expecting it to be changed. It was changed but not until 2005 but I’ll never understand why HH ever was the Marilyn when there are all these other higher spot heights dotted around. I know in general of course, that the highest points of hills aren’t necessarily marked by trigs, cairns or spot heights on a map.

No axe to grind here, I am just intrigued and a little puzzled by all this. You get the feeling when walking around there that 610m might not actually exist but I guess it must somewhere or other and without special equipment, it’s hard to tell. The current grid ref is at the wall. I accept the current situation of course but NP21 was never a contender as far as I can see.

Anyway that’s an aside. What matters is your success on 80m and I think we’ll find the band being used more for SOTA over the next couple of years. Next stop 160???

Database records for deleted summits are not removed. Certain views hide them, but the records remain - if you think about it they have to be because they are needed to validate QSOs that took place before the summits became invalid.

Thank you Martyn,
I thought it must be in the background for SOTA calculations even thought there’s no summit page for NP21.

I looked up one of my handwritten log sheets which is where I got SD 887 780 from. That is the Horse Head trig, my preferred setting up place in those days. When I look on a later printed log sheet NP21 is given as SD 893 768 exactly what you gleaned from the SOTA record. That corresponds to the 609 spot height on Sugar Loaf Hill. So all is now clear.

On Birks there’s a tiny dot on the 25k map at the official NP31 grid ref. A pile of stones on a bit of raised ground; I have operated from there in the past. According to Wikipedia, Birks was re-surveyed in 2006 and it’s height increased from 608 to 610m. I assume that the tiny dot may get labelled on a future map update.

Birks has plenty of scope for inventiveness. For a long time I have wanted to try the track winding up north from Litton. However, it goes to what may hopefully be a gate but could well be a wall, near a building. I might explore that some day and activate it from the 603m top; only 2.5km one way. I really do miss Horse Head though! See pics>
Thanks again,
John 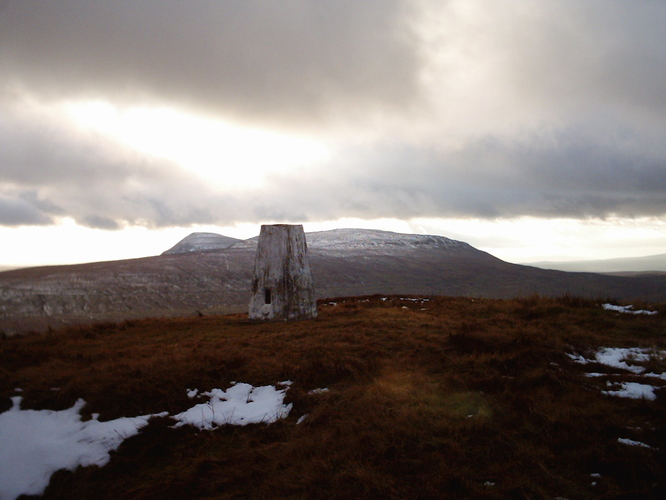 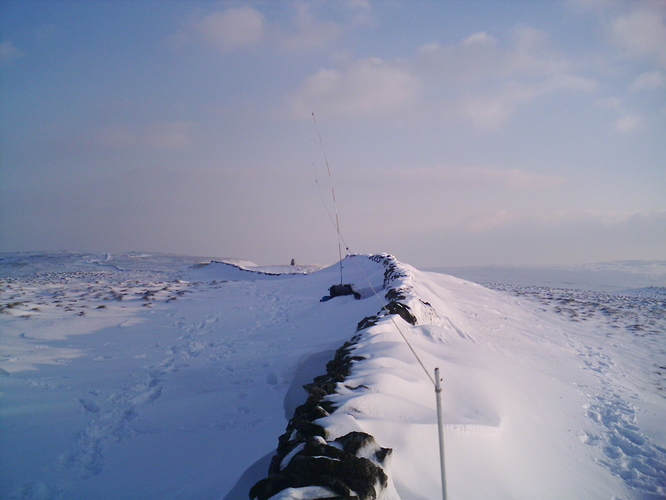 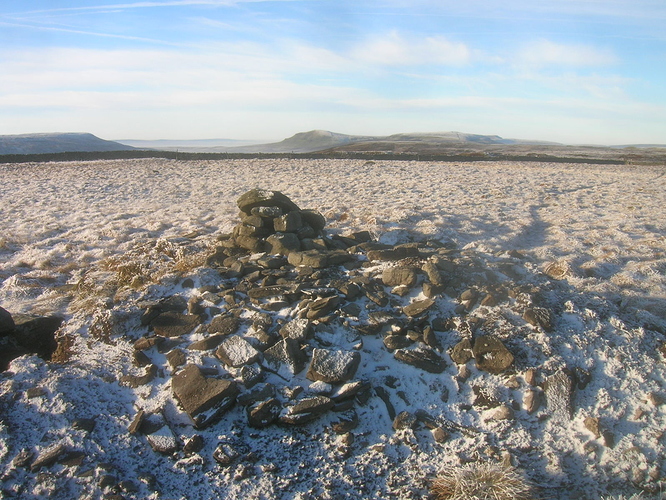 there’s no summit page for NP21.

Go here: http://www.sotadata.org.uk/summitReport.aspx and type the name (partial name) or summit ref (or partial ref) and all will be revealed.

Wow, It’s a minor miracle! I can now see what I always thought was lost. A list of who activated it and when I did it. Obviously what Martyn knew about.
Thanks Andy,
John