The vernacular architecture of north-east Scotland is typified by stone-built cottages with slate roofs. My home QTH, a farmhouse some 150 years old, is the same and perhaps our slates came from the now disused quarries on the 381-metre Hill of Tillymorgan (GM/ES-079), just six miles away and my target for today.

Easily identified by its three prominent wind turbines, it’s an often overlooked one-pointer separated from its near neighbour, Hill of Foudland (GM/ES-071), by the A96 Aberdeen-Inverness road, and it’s probably one of the easiest summits in the area to activate. Well, almost. Finding the Trig Point has been a challenge for walkers over the years as they risk disappearing headlong into the former quarry workings.

The start point is near the cemetery at Kirkton of Culsalmond from where the track leads gently uphill towards the left-hand wind turbine. 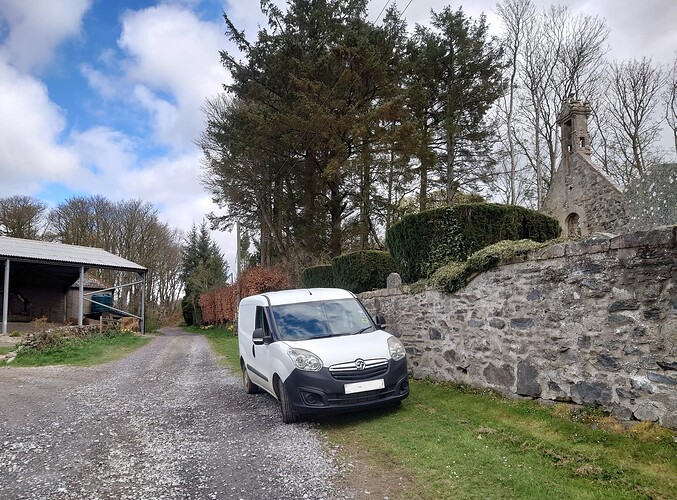 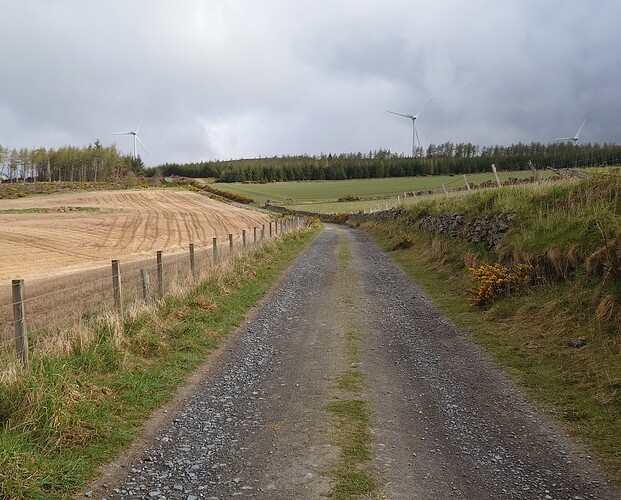 The only significant decision comes at that turbine. It’s tempting to continue on the wide access road to the right but instead, I headed straight on into the heather where a brief faint path took me to an easily-crossed sheep fence, beyond which lies the key to finding the Trig Point. 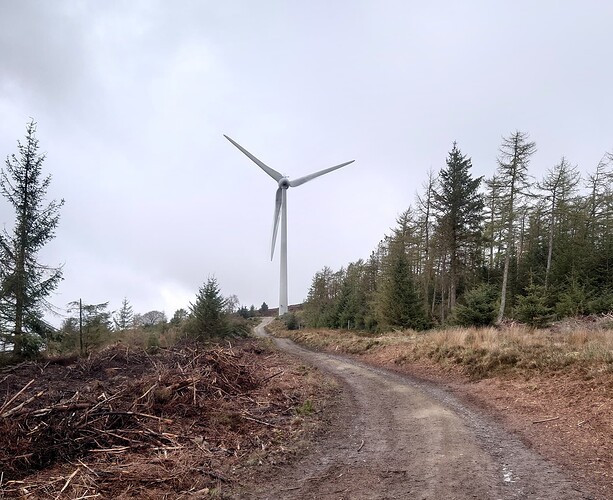 I headed straight up through the tussocky field until the crest revealed the first of the quarry workings. Behind them, on a grassy plateau, is the summit. It’s usually grazed by sheep so I didn’t bring my usual YK9L hill companion, Sula, especially as it is lambing season. The sheep I encountered were polite and well-behaved but do remove your boots before stepping onto your expensive shagpile carpet when you get home! 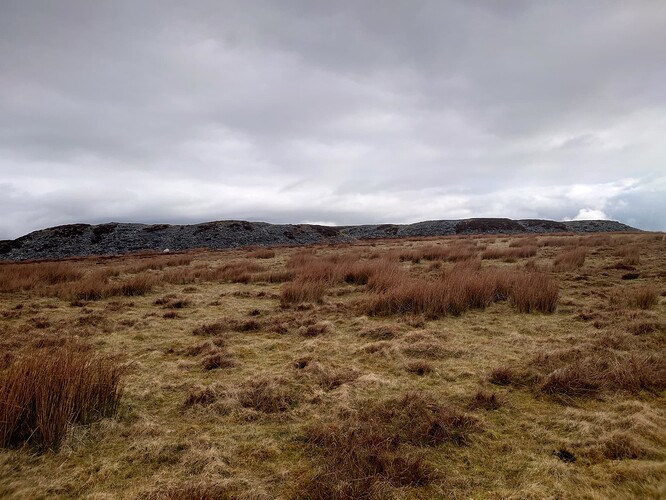 It’s worth pausing to look at the quarries, though. According to local archives, they were established in the 18th Century and continued to operate into the late 19th Century. In the early to mid-19th Centuries there were eight quarries in full operation on the hill and up to 10 men were employed in each quarry as quarriers, splitters, barrowmen and labourers. Some of the stone bothies in which they sheltered still remain. The adjacent aerial-bedecked Hill of Foudland has similar quarry workings. 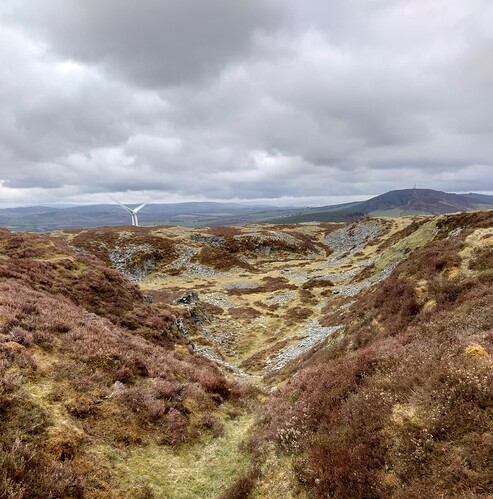 Before I get slated for too much historical waffle, on to the activation. The KX2 was set up initially with a Bandspringer Midi commercial antenna but for some reason I couldn’t get it to match to any sensible SWR this time so took it down and resorted to the familiar W3EDP, orientated W to E. By now it was about 3C in the windchill, misty with rain showers and what is usually a simple Sunday afternoon stroll was taking on the meteorological characteristics of a serious hill. 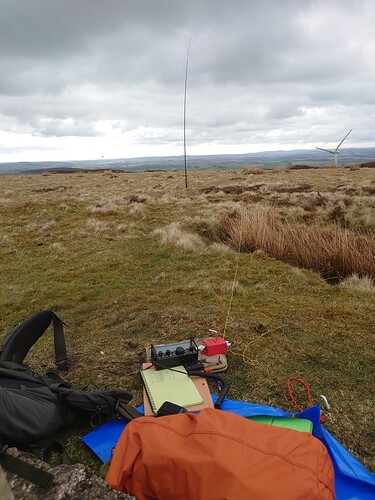 I spotted myself at 14.275 MHz on SOTAWatch at 09:26z and was grateful to hear some familiar chaser voices responding immediately. Signal reports of between 55 and 59 came from EA2DT, DL2HWI, SA4BLM, HB9BHW, F4WBN and EA1GKP. Then, after six QSOs, it went quiet. No response to my CQs, no S2S calling in, and no more feeling in my fingers as the wind strengthened. Time to head back to base.

The walk down takes barely 30 minutes (not much more on the way up) but the views, in better weather, are pleasingly extensive on all sides. Despite the cold, wet and constant “whooshing” of the whirling turbines, I was happy to be on any hill and not driving along the busy A96, visible far below. 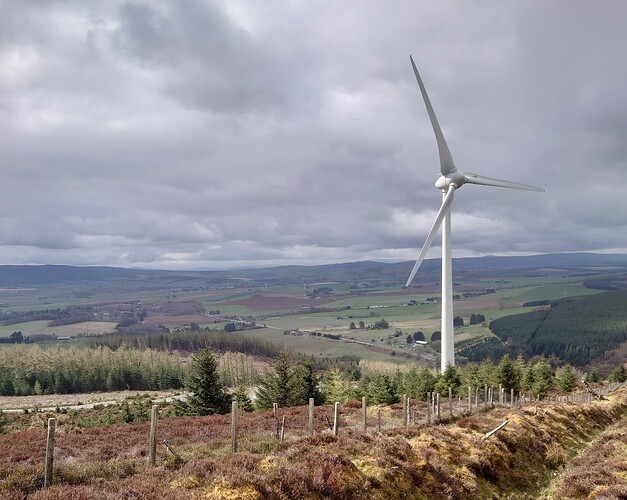 The whaleback of Bennachie, with the SOTA summit of Oxen Craig (GM/ES-061) in the centre, emerged from the lifting murk as the path down beckoned. 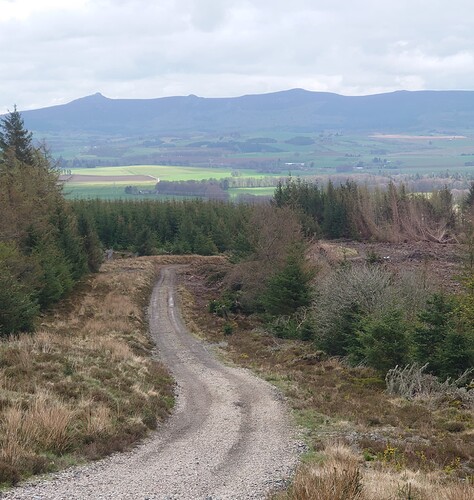 Back at the van, I noticed two nearby farmhouses being restored. I wondered where the slate for their roofs was being imported from? Were the ghosts of the 18th-century Tillymorgan quarrymen looking on in dismay at the demise of their once flourishing local industry?

Or were they simply baffled by the sight of this strange chap, sporting a SOTA hat, wandering around with a pole and a length of wire then speaking excitedly to folk in foreign parts via an amazing gadget called a radio?