I’ve been working hard these past couple of days turning my store (food retail) around for Hogmanay (New Year), so I decided to have a day off before the mad rush starts. WX forecasts over the past few days have been changeable. I only wanted to spend half a day on an activation, so decided on Ben Rinnes, as it’s just an hours drive from home and has a decent track. I’d been up there on a family outing in the summer. No radio and a first ascent for us all, as it’s a hill we generally drive past…

Monday evening was spent watching “Touching the Void” (again) with Mo. It’s a classic, as is the book. Go find a copy if you haven’t read it!

28th December 2021
0645 - I set off in the courtesy car, which is some kind of Peugeot with overly bouncy suspension, and voice controls that don’t seem to have any functionality. I opted to take the direct route to Dufftown, which meant taking the Cabrach road. Anyone who has climbed The Buck GM/ES-039 will know that road. It’s not ploughed in winter. It was pretty icy this morning, but I took my time and was at the small car park for Ben Rinnes at around 0750.

There was another car there! Two ladies out to walk their dog up the hill. We all departed at the same time, all wearing headtorches. They had large down jackets on, I had just a base layer. It was zero degrees, however no wind and no moisture in the air. Off I set, with my Buffalo smock strapped to the rucksack. 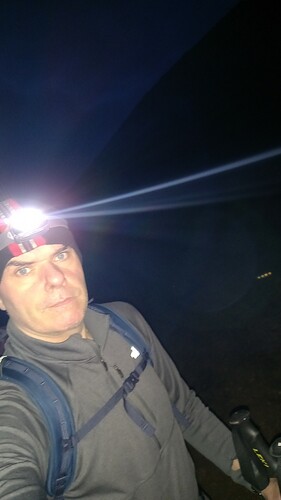 I quickly passed the ladies - they were already too hot! - and made my way up the well made and well maintained track, dispensing with the headtorch after 10 minutes or so. 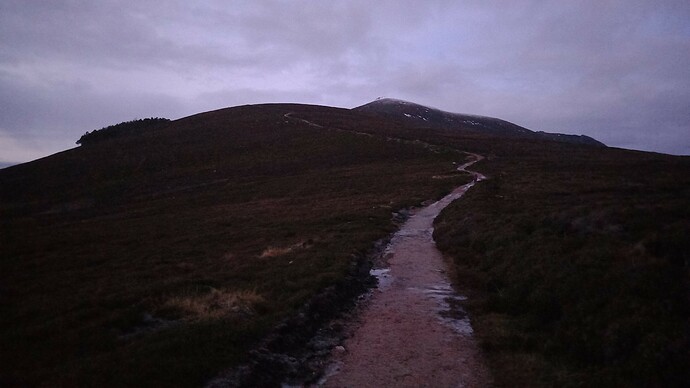 I’d packed my crampons, expecting old and frozen snow. The ice axe stayed at home. As it was, the first dusting of snow appeared at around 500m ASL, but it didn’t present any problems. Further up, the path was icy, with a coating of rime and the occasional water ice patches on the flat bits. 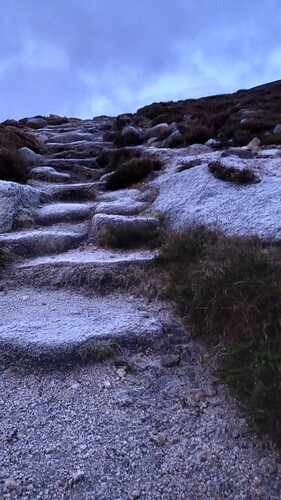 I wasn’t expecting views, as the forecast was for cloud, so when the sun appeared in a slot between the clouds, I snapped it with my phone, thinking that would be the last I’d see of it for the day. 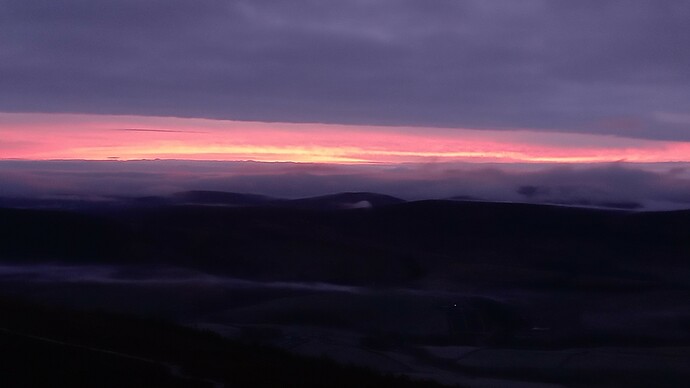 I arrived at the top at 0850, the climb having taken 55 minutes. Just in time for the cloud to come over. 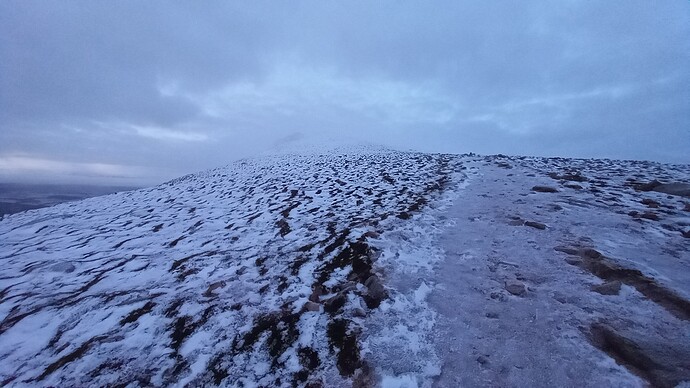 Ben Rinnes is topped by a series of granite tors - tors which were swarming with a thousand wasps when we climbed the hill back in August! 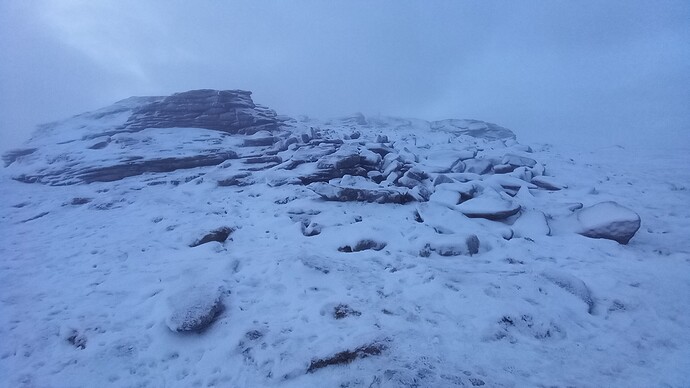 There is a flatter area to the south west of the summit area, well away from any paths. It was here that I set up the W3EDP, chosing that aerial as I wanted to try the higher bands and it was simple to set up. (I have an EFHW for 40/20/15/10m) but I normally can’t be bothered with the extra time it takes to set up.)

I tried 40m first, confident that there would be a short skip given the amount of solar actvity. I wasn’t wrong. I logged 13 stations in 10 minutes, then the band went flat on me. 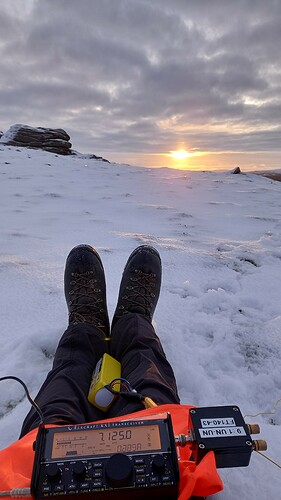 Popping onto 20m, I worked 9 stations in the next 6 minutes. All the Usual Suspects, as well as a summit to summit with SQ9OZM. I then plumped for 15m. A bit more patience needed here, but I got UR3IF, 9A5THR and EA1OT in the log in the following 10 minutes.

Looking up, I could see that the weather had improved significantly, so I grabbed the handheld, attached the Diamond whip and headed over to the trig point. 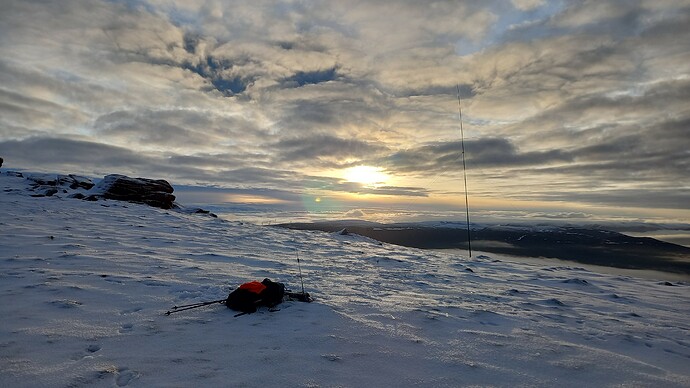 Whether the 2m Spot worked or not, I’ll never know, however I had 3 relaxed pace QSO’s with local Ops. in Elgin, Inverurie and Ellon.

Time to take in the views and snap away. Ben Rinnes is amazingly well placed and has 360 degree panoramic views. 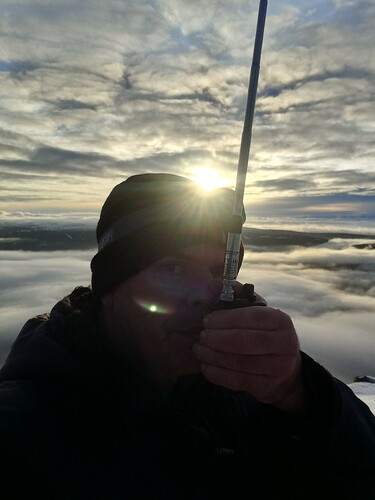 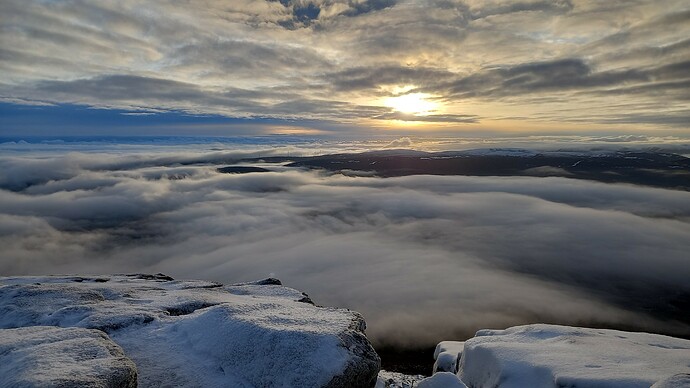 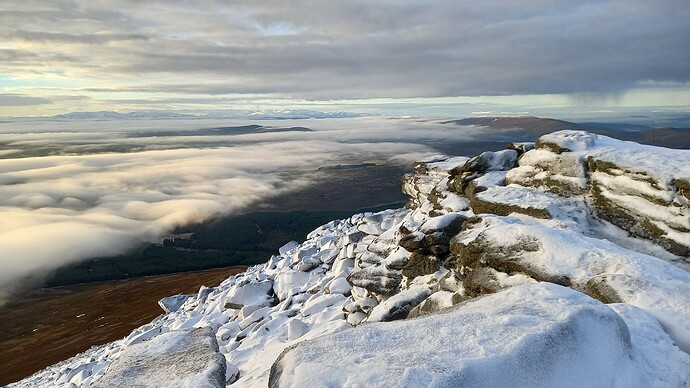 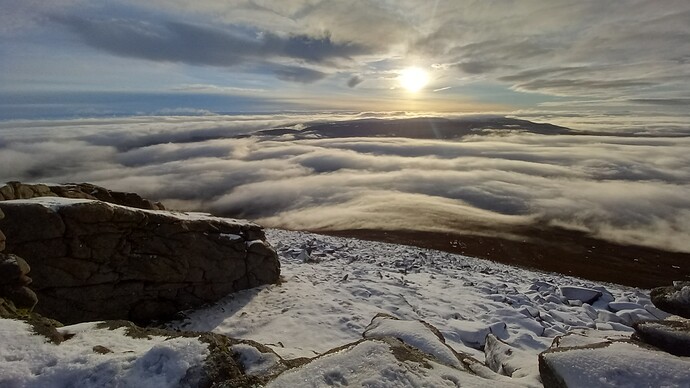 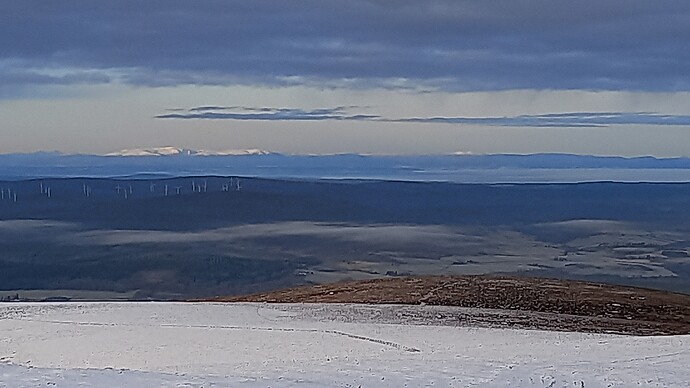 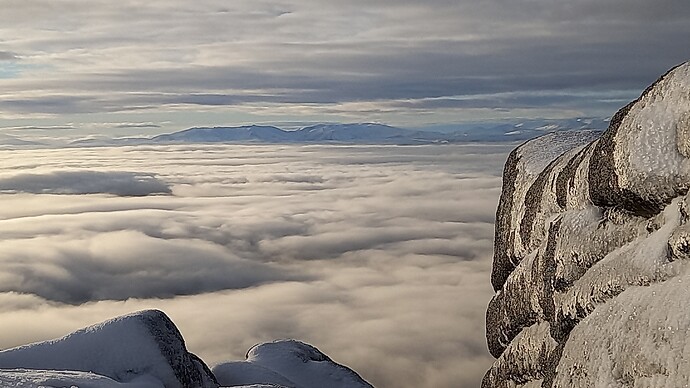 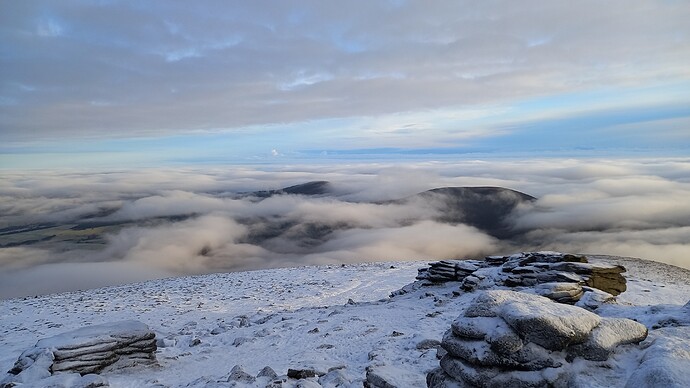 At around 1030, I thought I’d better go back over to the HF setup and dismantle it! 1045 saw me on my way down. Thankfully the weak sun was strong enough to melt enough of the ice from the rocks and I was able to maintain a good pace. Dropping back into the cloud wasn’t fun, however I was back at the car some 35 minutes after leaving the top. I helped the morale of the dozen or so climbers I passed by letting them know, “It’s sunny on top!”.

Equipment carried
Crampons, bothy bag, warm layer. The Buffalo shirt was donned at the top. Everything else was left in the bag.
Food was mainly snacks. All I ate was a banana and around 400ml of water.
Radio - Elecraft KX2, 9:1 un-un feeding directly into a classic W3EDP
Radio - Yaesu FT-3d, Diamond RH-770 extendable 2m/70cm whip

Hi Fraser, thanks for your activation report and great photos.

Geoff vk3sq HNY to you and Mo and cheers

Good Piccies Fraser and thanks for contact.
Best 73 and HNY to you and Mo

Billy Whizz has nothing on you! I’d be taking 55 minutes climbing vertically, going nowhere horizontally. 2 hours plus to achieve the course.

Well done on another great outing. That summit is a bit far for me from my base, but may feature if I can arrange an extended stay at some point. Unfortunately that’s not on the cards at the moment.

That summit is a bit far for me from my base

As you say, probably a bit much for a day trip Gerald. If you had a couple of days then it would be worthwhile looking at nearby Cook’s Cairn GM/ES-033 and Corryhabbie Hill GM/ES-031 as well. I mention The Buck of Cabrach in my report. It’s very similar to Ben Rinnes, with a pleasant summit tor. An even shorter walk but on a worse path. A favourite of mine though!

Many thanks fir the suggestion Fraser. I’ll be looking at multiple summit days for the summer as I’m hoping to get up your way as often as I can. Currently I’m thinking more of how many winter bonus points I can add.