I’ve been in Dublin since Sunday evening, the main reason being to attend the Embedded Linux Conference Europe 2015. I’d decided I’d extend my stay when I was arranging hotels to add at least 1 day and maybe more. Changing circumstances back home meant that I could only add 1 day in the end and that was just as well as I hurt my back 3 weeks back. I wasn’t sure how I would be but I was sure I could find something to do in Dublin if I couldn’t bag at least one summit. I didn’t factor in the Ionosphere not wanting to play.

My back still isn’t 100%, probably only 75% but surprisingly, walking makes it much better. But not with a big SOTA bag of radios. However, I’ve done the business trip with SOTA a few times now and have managed to reduce the gear to a minimum. 817+5m travel pole, mini guying kit, 1x LiPo, 30/20/17/15m antenna. The trick is to pick summits that are only a short walk. Ben of Howth is actually a little longer walk but you could do it ordinary shoes, you don’t need real mountain gear and it’s easy to reach via public transport.

My hotel is about 20mins from Connolly Station, Dublin’s main station. From here Howth, a very picturesque fishing port and exclusive Dublin suburb is a 25min ride on the DART train which is 6Eu return. That and checking the route from the station to the summit were easy to do before arriving here. What you can’t predict is the weather and I have plenty of warm coats and waterproofs. So it has been wonderfully warm and sunny here apart from one morning when it rained hard. Today I sat in the sun waiting for the train chillaxing with a nice cappuccino, somewhat spoilt when an old bloke with a dog the size of a large rat on a lead walked up whence the dog tried to pee on my bag. A deft application of my right boot to the dog’s doodahs appraised it of the error of its ways and apart from a glare from the owner no damage was done.

On the train to Howth (pronounced as in both) I had a feeling regarding the leads I had with me. Keyer+leads+Palm Paddle, mic, pencil, antenna coil and no power lead, it is captive to my other 817. I have a lead but it was in a box with “SOTA on business trips” cables. I did have a power lead that I use with my VX170 and a small home made LiPo pack and I knew I could bodge that into something that would work. Of course, the leatherman tool was in the SOTA bag

Anyway Howth is a fishing port and I thought I must be able to get something there. There was a marine supplies shop where I got a disposable scalpel and reel of insulating tape for 2.90Eu.

The route to the summit is easy, you can follow the roads or paths. The paths are marked on the maps I have for Orux Maps on my Android phone, it was turn on GPS and follow the arrow on the map right to the trig point. It took about 35mins from leaving the marine shop. It was a brilliant sunny day when climbing but soon became quite cloudy when I stopped moving. Rod M0JLA had mentioned dwarf Gorse and there was loads of it just a few inches long everywhere and damn spiky too. I set up just down from the trig as this is a popular summit. No problems setting up the antenna and it took a further 5mins to bodge a power cable. Job done. Now would there be any chasers with the ionosphere being broken with k-index still at 6

A call on 30m didn’t get picked up properly so I spotted myself and worked Jurg HB9BIN in France for an S2S 1st call. Signals were very QSB but callers continued with a small pileup at one time. It went quiet and a QSY to 20m produced 6 CW chasers with ODX being OH5LP. I tried SSB but 5W wasn’t going to work with poor conditions but I did work EI2CL a couple of miles away on ground wave. After a period on 17m produced nothing but there were some big signals when I tuned about. Back to 30m brought another 7 QSOs. 15mins calling on 2m FM resulted in zilch, but GB3NGI was 51 on the rubber duck.

So in the end I worked 13 on 30m, 6 on 20m CW and 1 on 20m SSB, which, to be honest, for a midweek activation is not bad and it’s much better than I expected with the solar conditions. I could hear several DL stations on 40m and I would have expect G stations at midday. I think I was benefiting from CW’s power / bandwidth advantage to SSB and I’m sure 5W SSB stations may well have struggled. Anyway another country activated which was my main aim. Thanks to the chasers.

Picture time: this is looking south east, the distinctive summit is The Scarp and to the right the big summit is Fairy Castle IE-018, you could see the transmitter masts but not in the photo. 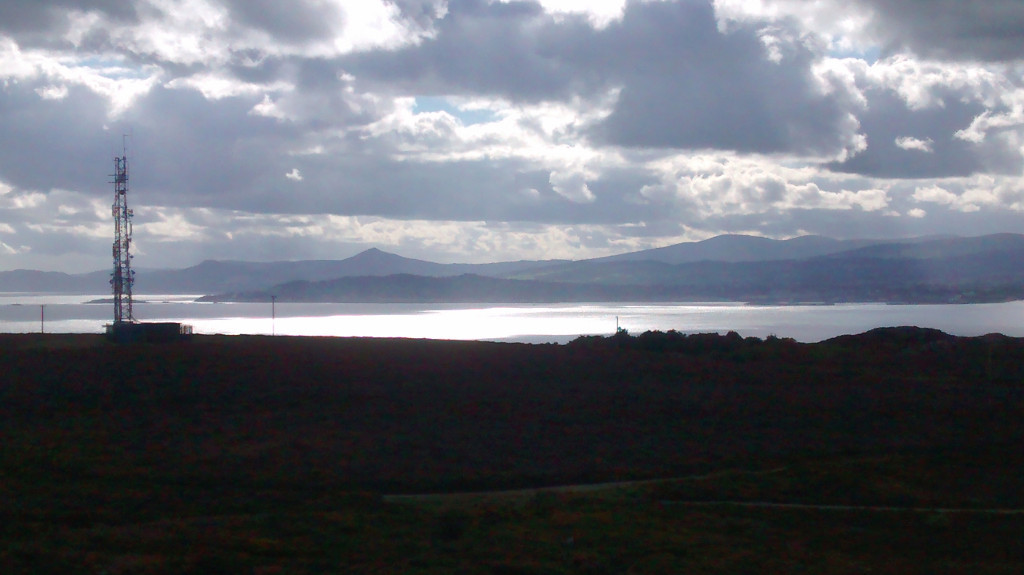 Summit trig point with local embellishments. I didn’t know the Irish OS used the same shaped pillars as in the UK. 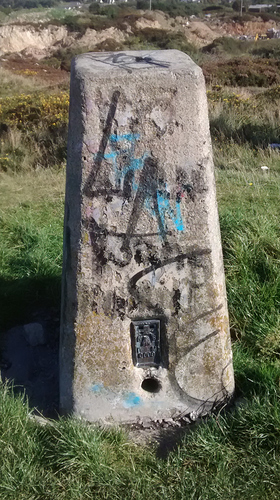 Looking NNW over the harbour at Howth. Some nice places to eat fresh sea food here. 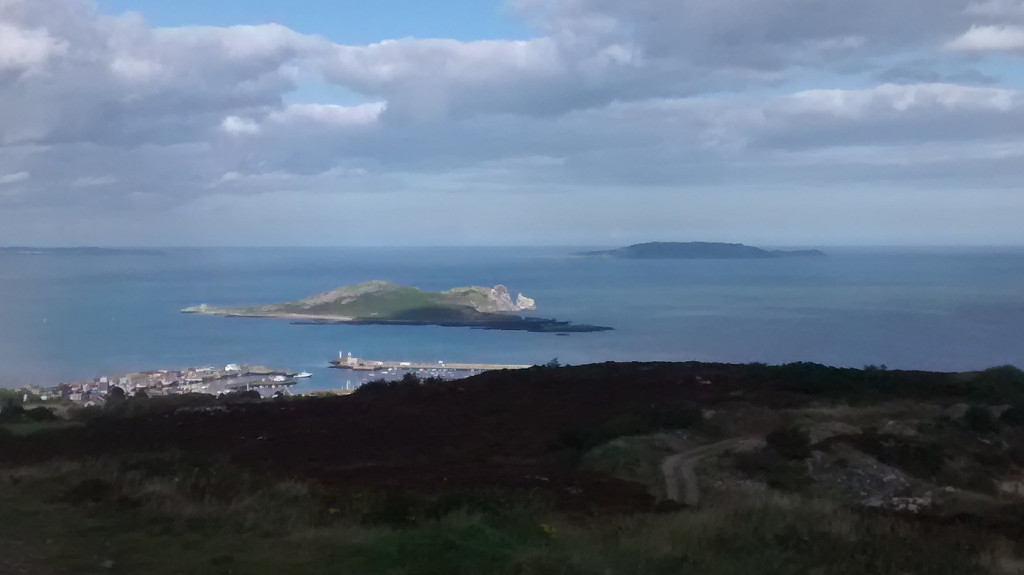 Finally, being sad, I notice lots of houses had Wolsley Colour King antennas. These are a kind of bow tie antenna and have a very narrow vertical beamwidth but wide horizontal beam width. You find them in places where you get strange multipath problems and these were all pointed at a TX on Fairy Castle which is LOS. But it’s across the bay and so there must be bad problems with multipath when the tide comes in and goes out. The same is seen in Edinburgh for those receiving TV from Craigkelly TX across the Firth of Forth. A few have got some fairly exotic setups for somewhere by the coast (and so windy) to try to cure the problems. I offer this, a Wolsley Colour King illuminating a 1.5m mesh dish. That should have some gain! 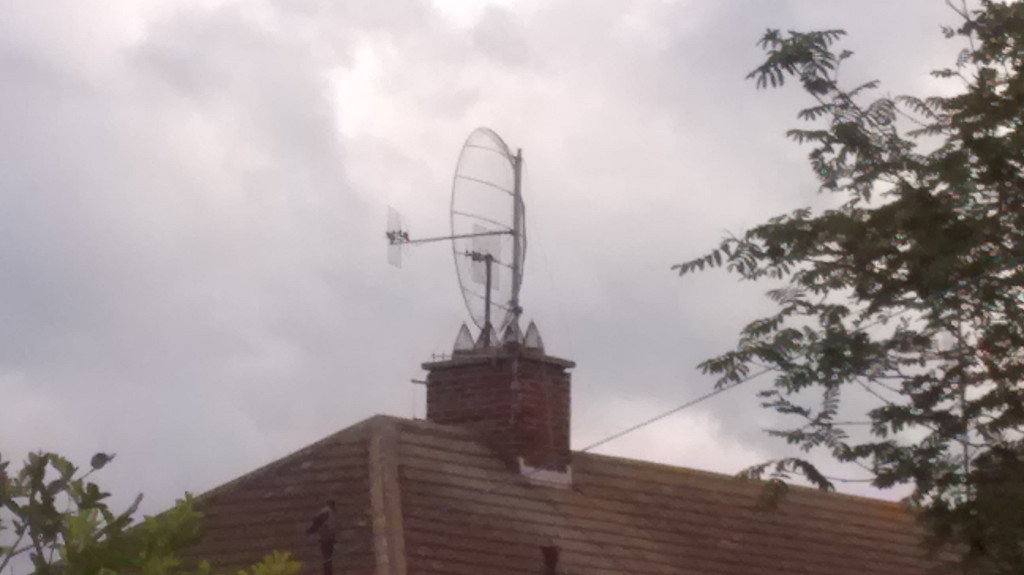 If you have never been to Dublin (like me till now) then do visit. Excellent city, lots to do, some fab old architecture and whizzy new stuff too. The people here are great, tourists (and their money) are very welcome. Best welcome I can recall in any city I’ve been to.

Also, Orux Maps on Android is brilliant. The accuracy of the map to GPS cursor position is wonderful and the maps are free from OpenAndroMaps. With my MotoG with AGPS and a built in compass you get a mark on the map for where you are and it rotates to match your heading in real time. I’m very pleased with this as it makes wandering around a new city easy and is good enough I could take the trails down from the summit rather than keep to the roads.

Great report Andy, glad you were able to qualify an EI summit. Seems like an idea for a weekend away sometime next year

Also, Orux Maps on Android is brilliant. The accuracy of the map to GPS cursor position is wonderful and the maps are free from OpenAndroMaps.

I am glad you introduced me to that app, very useful indeed.