The WX isn’t predicted to brilliant for the holiday weekend so I took Friday off work to get out. Buoyed by my relative ease at doing 2 summits a week back I picked a unique and an “easy 1pointer”. The WX was predicted to be nice to begin with and cloud up during the day with may a shower later.

Ben Clach is the site of an old Army firing range. The signs were up for many years advising people to avoid it. It turns out it hadn’t been used for many, many years. The signs are long gone. So with it being a former firing range and reports of a GOML farmer, I’d always avoided it. But today it was one of the nearest summits I had yet to activate. The WX has been very dry, I think we are in the driest April for 60 years and that’s another factor in Ben Clach’s favour… there is a wide flat boggy area to cross on the short route. The long route is another 12km of driving and about 9km vs 3km walking for the short route.

Ben Clach GM/SS-149 from the parking space by the gate. Doesn’t look hard? The nice WX was not to last. 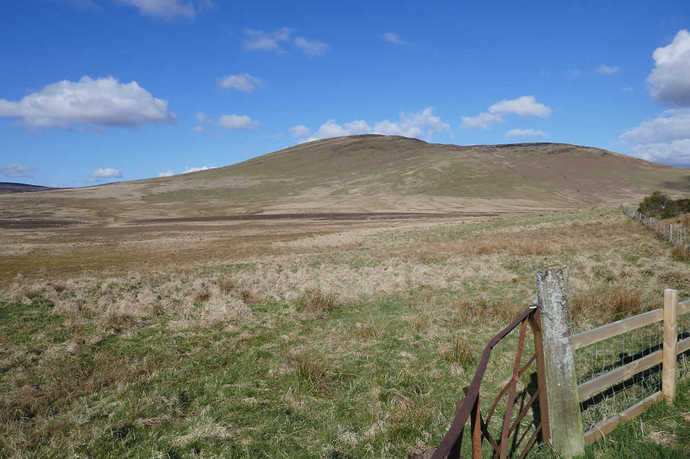 There’s a track shown on the map and a small stream. The stream is actually 2m wide and 1m deep! But a report said there is a bridge in good condition although the track is wet. Well not today. I could imagine it being horrific, reports say it’s often ankle deep in water. Today it was just a bit soft and the bridge is fine.

I followed the track to where it drops sharply into the Corriebeagh Burn which is the end of Findhu Glen. 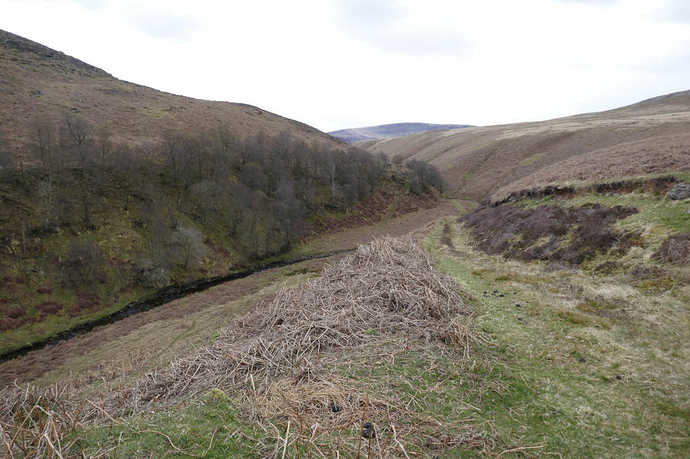 From there I struck up. Oh joy! The ground turned from wet grassy track to Tussock Grass. There was a nice animal track at the join between the tussocks and dead Bracken. So in the middle of Summer it’s worse with Bracken and Tussocks. And bog. There’s about 1k of this till the tussocks thin out as slope increases markedly. After that is grass and calf length touch Heather. Oh well, that’s my four favourite ground types, bog, tussocks, bracken and heather.

It’s a tedious pull up to the top where the heather goes mad. As the summit was essentially flat and I was 250m horizontally and 2m vertically from the summit I gave up and set up the antenna.

Ben Clach summit terrain, can’t be bothered to actually find the top in this. Not only heather but lovely bog holes full of green goo and deeper than a walking pole. 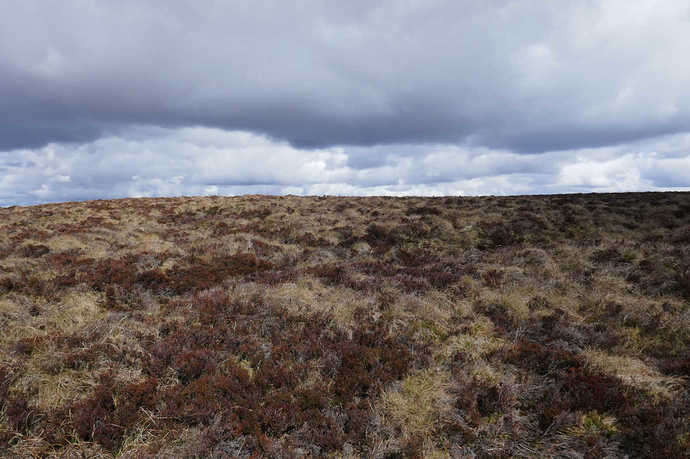 By now the cloud was 80% coverage and the wind was blowing from the NE. So it was damn cold for the last day of April. 60/40/30m dipole rigged and there was OK levels of 4G phone coverage. First on was 60m and after a spot it was a bit slow going but eventually I worked 9 UK stations in 15mins. After that, 40m which was moderately long skip. I worked 18 here on SSB, most UK stations where 300miles distant and plenty of continentals including Northern Spain, Southern France etc. After that 30m CW which was quite manic at times. I cannot remember when 30m has been this busy, 22 stations include G, EA2, ON, HB9, F, OE, SM, DL, LA & YO.

During the whole activation it was gently raining hail pellets down. Did I say it was cold? Towards the end of the 30m activation the hail turned to rain and quite heavy. I aborted the activation and started dragging everything down ASAP. Of course, once 75% of the station was back in the bag, the rain stopped.

There were some good views however. Despite only being 40 miles from Edinburgh, it doesn’t half feel like you are in the middle of nowhere here.

Hoover Bag or Uamh Bheag GM/SS-085. I remember walking through some peat hags to get to this summit that were over 2m deep. 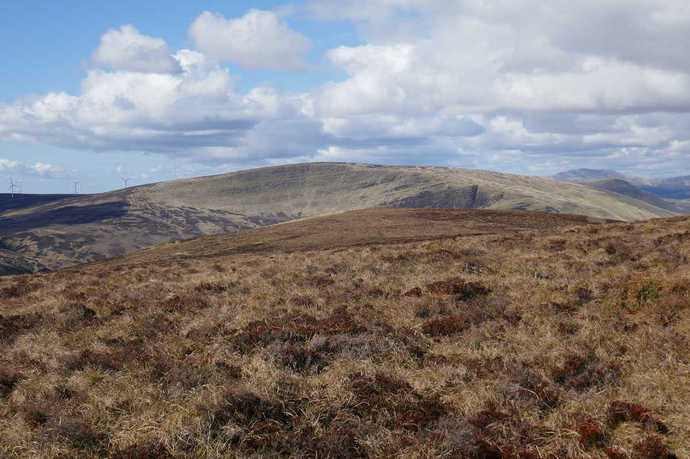 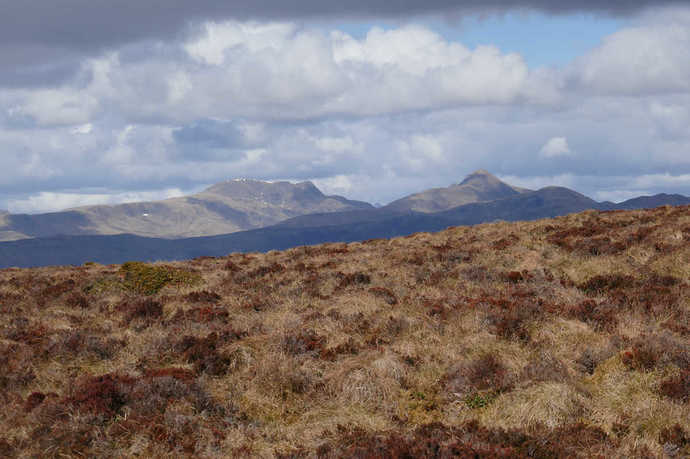 Descent was the reverse of the ascent except I found a worse path through the tussocks. Back at the car it was a can of Red Bull and some chocolate. Then off to the next summit which is only 20mins drive. I’d have followed the road I was on to the town of Comrie then back to the Drummond Estate roads and Torlum but I asked the car satnav for a route and it took me on some pleasant tiny roads though nice countryside.

This is a wee 1pt summit and I remember it from some years back as a pleasant walk the week after I reached MG. I didn’t think it was hard but it was a real stretch today. It shows how much hill fitness you can loose after only doing SOTA for part of 2020 and just starting now in 2021 because of lockdowns.

The route is only forest tracks most of the way and a foot worn path up the final ascent. It’s impossible to get lost. Which is why I needed a map and GPS to fit the paths on the ground to the map and get to the top. Shameful!

There’s lots of this. 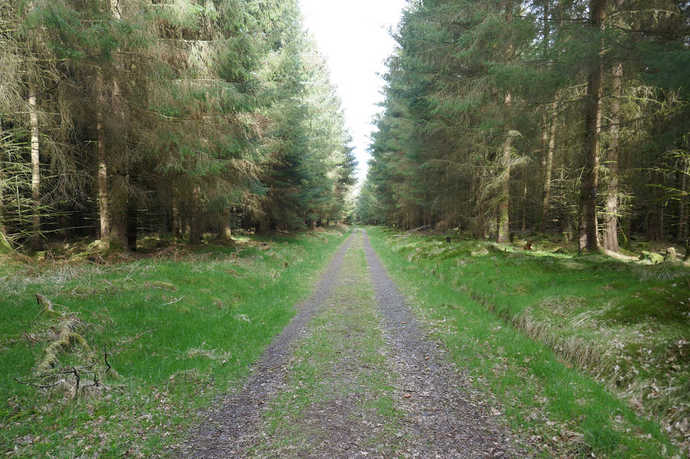 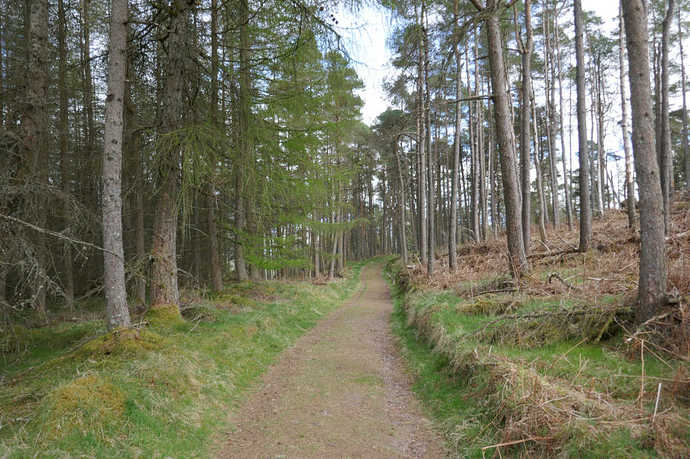 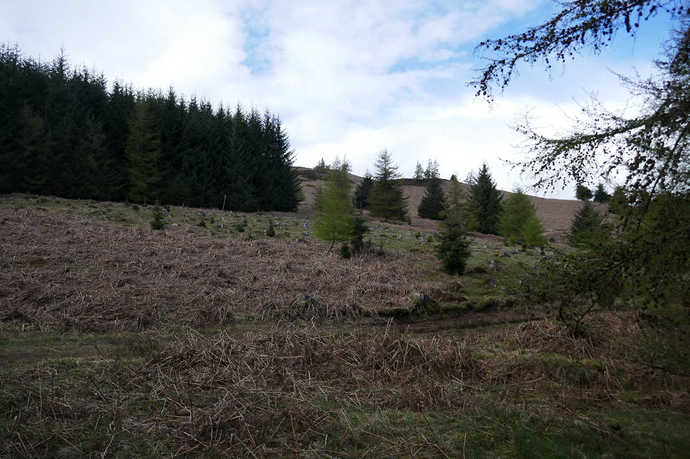 That last pull seemed brutal on my lardy legs. And it was drizzling non-stop. Boo! I setup using a fence near the trig where there was a sapling to shield me from the rain. Though it wasn’t much of an issue and by the time I ran out of QSOs it had stopped.

Setup using the fence. Shield sapling and trig on GM/SS-227 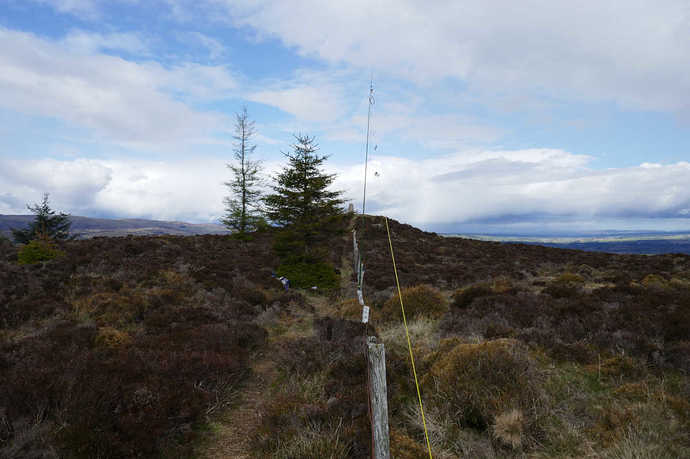 Oh no, more damn heather. I’d forgotten the top was like this. I thought it was grassy. 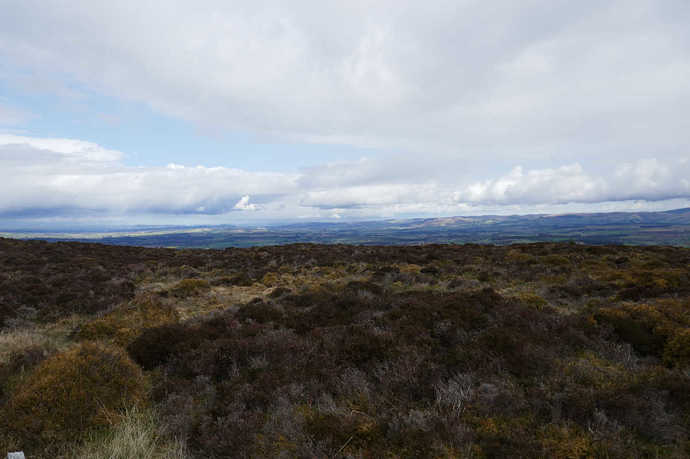 A view down in to the pretty Perthshire town of Comrie. 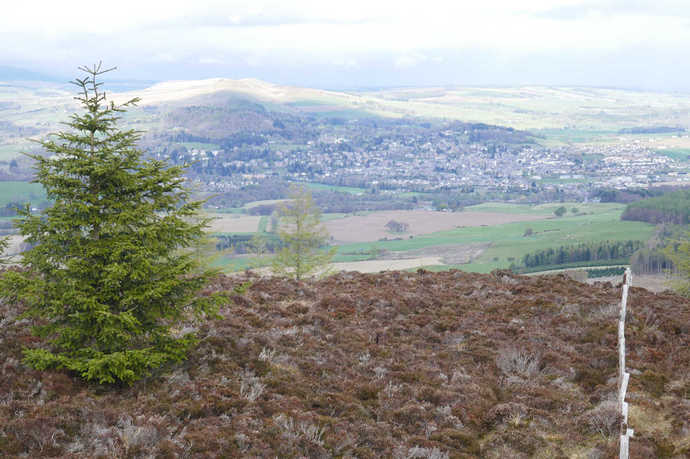 When the sky looks like this then it’s time to pack up and go. Surprisingly it brighten up soon after and there was no rain till I got back to the car.

I’m surprise by how knackered my legs felt after only a total of 10km walked and 600m of ascent. Must do more climbing. 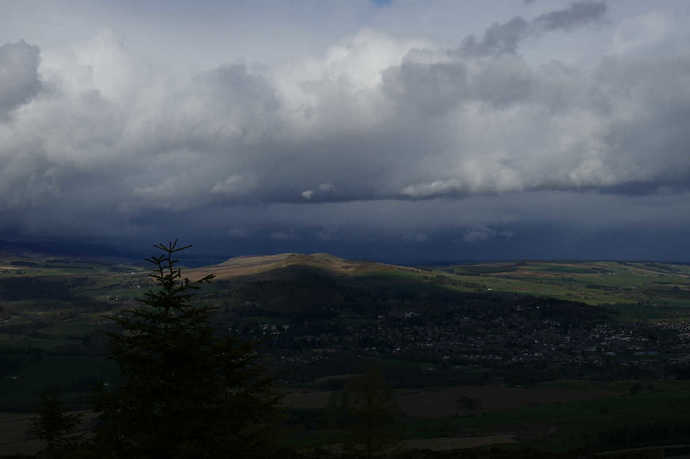 When I conneced the Bmax charger just now it said it was 54% full.