Yes I can hear the laughs from here… If you like straight forward rubber stamp contacts with no interest in electronics it’s time to return to your cave!

A while ago I read that the liner 2 has a 28Mhz i.f. If so I may well see if one of the small Ukrainian 4 meter transverters will fit inside the roomy chassis. Just a thought!

They may be old but it would serve as a brilliant inexpensive base for a transceiver that doesn’t need a separate transverter. Constructive replies would be appreciated.

For those who, like me can’t remember this rig, Here’s a review of it:

It looks quite like some of the FM rigs of the time and this article also says it has a 28MHz IF. Perhaps you could modify the existing oscilator sections sections with an SI5351 (? the programmable oscillator) or simply change the 38.53MHz crystal for a 42MHz one (if you can find one), go through and change a few resonat circuits to bring at least the TX down to 70MHz from 144MHz Matt? Hmm, maybe easier (and cheaper) to drop a ready made transverter in…

By the way - here’s the manual: http://www.afu-df3iq.de/Hersteller/Belcom/Belcom%20Liner%202_manual.pdf 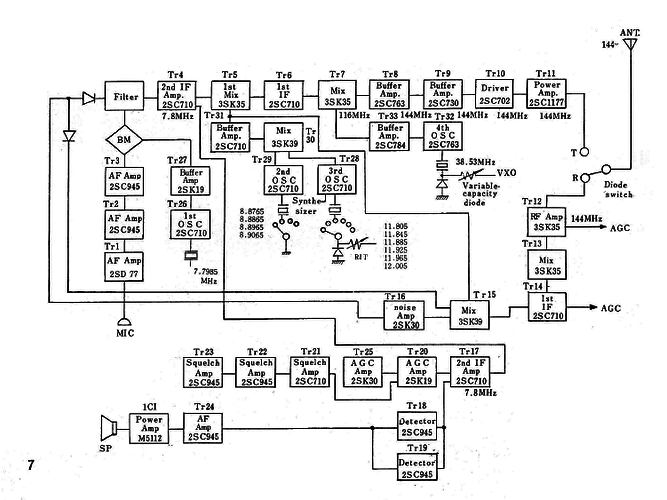 A Liner-2 was my first commercial rig, I had a lot of fun with it, as it made possible DX that I never could work with AM - I also had a Liner-430, but by then 70 cms was a mere shadow of its former self, nearly as bad as 2 m SSB is now!

but by then 70 cms was a mere shadow of its former self, nearly as bad as 2 m SSB is now!

That would be after the Class B licence got 2 metres I guess? Previously it only had 432MHz and up I think. So as with the Foundation call coming in with HF rights, the amateurs left VHF for the HF bands, so it probably was then between ex-Pye gear on 70cm AM and FM to commercial SSB gear on 2m. … I still remember running ex mobile AM radio gear on 2m though - great TVI makers … Even better when running screen grid modulation to create double sideband reduced carrier.

I love your spirit of inventiveness. The Liner 2 was wonderful. You could call CQ and be DX on 2m and every mixing product and harmonic at the same time. 116, 144, 288, 432 and many more! Not too bad if they were not butchered by the owner to squeeze more power. Anyway, good sets are becoming rare now so if you do this mod, consider trying to do it such a way it can be undone.

That would be after the Class B licence got 2 metres I guess? Previously it only had 432MHz and up I think. So as with the Foundation call coming in with HF rights, the amateurs left VHF for the HF bands, so it probably was then between ex-Pye gear on 70cm AM and FM to commercial SSB gear on 2m.

Not quite, Ed, until the geographical band plan came to an end I was running a homebrew crystal controlled rig on 2 m with a QQV06-40A in the PA, using low level AM. This was converted from my 70 cm rig as 70 had gone dead, and if needed I still had a low power homebrew rig using QQV02-6s in a tripler-amplifier. In fact before the G8s got 2 m ex-Pye gear was very difficult to get hold of and was surprisingly expensive - you could buy a commercial tripler-amplifier from TW for less. Most TVI was the other way around, there were evenings when timebase QRM covered the whole 70 cm band! I can’t remember how long I kept the Liner-2 (the logbook for that time was lost in a change of QTH) but it was replaced by an FT-290R1 and a linear.

Oh the old QQVO "640’s and "320"s those were the days … My 70cm rig was a 2m Pye mobile AM station with FM modulation applied and a tripler - receive side was Microwave modules. I even made some 23cm FM contacts using the third harmonic out of the 70cm rig, but we wont talk about that … The 23cm antenna acting as a filter of sorts, of course …

I remember one 2m rig I had, had 2KV on the plate - I found out the hard way that fidling with the cover off with those kinds of voltage around is NOT a good idea.

Of course none of this would happen these days - but hell, I’m still around to talk about it!

73 and sorry for Hi-jacking the subject Matt.

No problem with reminiscing, i’m not adverse to old school home brew and converted equipment. I’ve just got my hands on a xtal transceiver that’s on three 5Mhz frequencies, FL, FE and FM. The liner 2 looks like it may not be on the cards. I have a converted stag 357 on 10 meters somewhere in the cupboard. That will be a donor if one of the channels are on 28.200! Matt

2KV on the plate - I found out the hard way

I wrote a review of the Belcom Liner 2 for Amateur Radio magazine (WIA) in the 70s. I used it for some Oscar 6 contacts, I think. Some tests were done on it by Ed VK1VP.

The 10 khz steps with VXO for the bits in between would be challenging to work with unless you always used the same frequency. Not a rig to happily scan across the band with.

Later I owned a Liner 430 and had some contacts with it. It had a helical filter in it that prevented it from being used on 435. A friend modified and realigned the filter to use it on a satellite downlink on 435.

As the 28mhz IF is variable using the crystal mixer and vxo (the block diagram up to the 28mhz point so resembles the early crystal synth CB radios) it should be readily upconverted to 70. Pretty heavy box from memory. FT817 and a transverter might be more compact and lighter.

I suppose as my QQVO6/40A linear only had 800V on it, the shock I received only partly killed me… and you wonder why I am strange sometimes!

A while ago I read that the liner 2 has a 28Mhz i.f.
[/quote]
As I understand it, that’s the good part of the radio Matt. The transverter to 2m was not the highest spec, hence why I opted for the Trio TR-7010 (which I still have - 1976 vintage). Anyway, I think running a 4m transverter separate from the prime mover would be the best option as you will probably end up buying an FT-817 at some stage. They have a way of getting into your backpack…

Noob!
TBH mine only had 650V before I gave up. It was a revamp of a Hiband Pye T30 into a 6m PA. I never got beyond making a 45W TPTG oscillator before a SSPA became available for silly money. I can’t remember now who had a QQV 7-50 on 4m with 1100V on it. ISTR it got hot enough on a long over on AM to desolder some tank components at one time. Mucho sparko and bangs!

TBH mine only had 650V before I gave up.

Nice rig, but still basically a mobile, though mine has worked over 250 squares and as far as Russia.

I bought another one for £50 earlier this year for conversion to 4m from a guy in Cornwall, but after my health issue I decided against it. Sold it on to another guy up in Durham for the same money - to replace a Liner 2 of all things!

I never got beyond making a 45W TPTG oscillator

You had to excite it first with a sniff of 6m drive from my FT690, then it was off faster than Usain Bolt out of the blocks. It howled like a Banshee even with all the screening fitted. I’m glowing with pride at being called a true artist

These things are sent to try us! My nemesis was a 3 valve video amp I built when dabbling with analogue TV. If I increased the gain to anything greater than one, it oscillated at about 1Hz. Never solved it

Back to topic - I never owned a Liner 2, and I don’t think I’d hack one about if I owned it now unless, as Andy suggested, you could do it in a way that made it reversible.

I considered the process of converting a TS520 to 1296 once… A 2C39 would be ok with 900v on the anode. The base 520 would produce useful signal from the last mixer on 28 mhz, there are transverters available that would be mounted on the rear panel like the DC-DC converter was. A Toshiba or Mitsubishi module would bring the power up to 20w and that would be the novice level, but adding the 2C39 into the final compartment after removing all the DC band stuff would finish it off for advanced licences, should get near to 100w from that. You’d have to be careful it didn’t finish you off too.

It would be heavy. But create a nice “show and tell” at your next hamfest.