Thursday 4th November
I set off from home at 0500, arriving at the start of the walk at 0645. The car park is gained via a steep single track road from Blair Atholl. I set off at 0700, just as it was getting light. Today’s walk was to be a long one, with three summits, although most of the return route would be low level path, so not an issue if I ran out of daylight. There were also bale out options after each summit, something I thought I might use, given the strong northerly winds (35-40mph and-10°C wind chill). 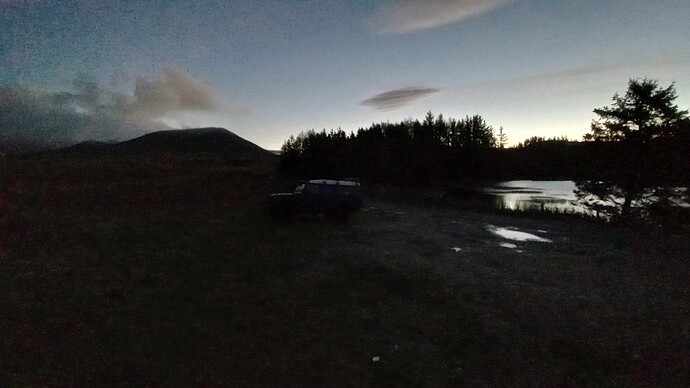 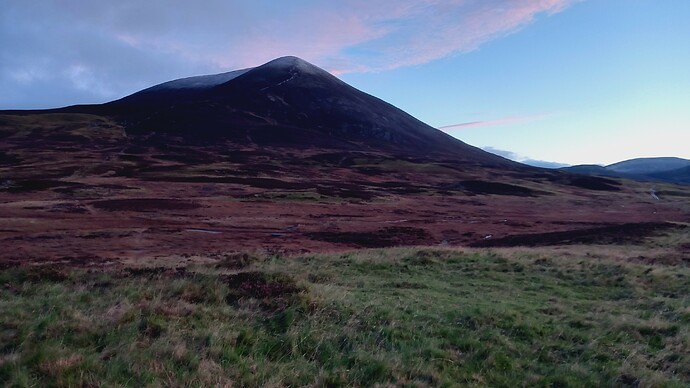 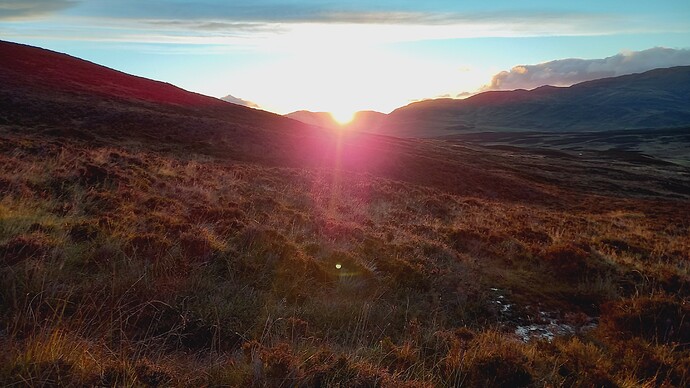 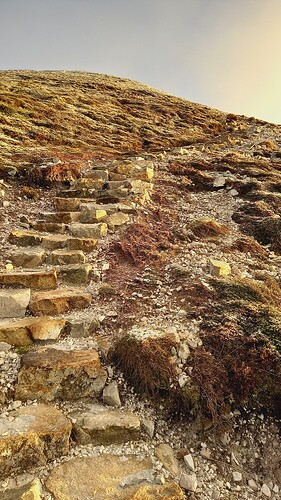 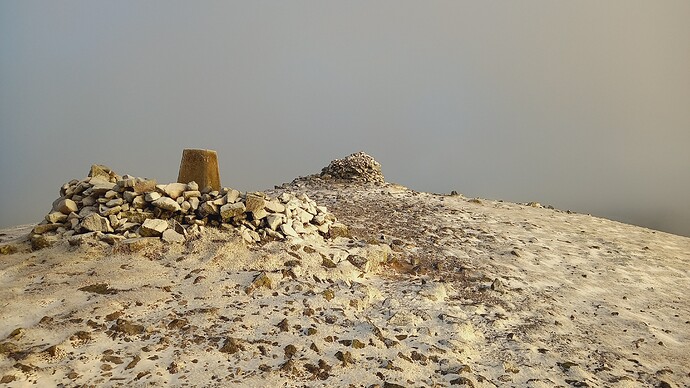 The wind hit me hard when I topped out at 0820. I found some shelter at the summit, put on my windproof and set out putting up the 7m pole and W3EDP. Now at this point I was blissfully unaware of any solar activity, having checked the solar data the previous evening. It was only when I went to put my spot on that I saw an alert from an Aurora Watch app that I use.

I tuned up on 40m and thankfully got great signal reports from @F4WBN @EA2DT @F5JKK and @0E6END. And that was it! Chris initially gave me 3/5. This was because the mast had fallen over! He came back with 5/9 once I had re-guyed it.

Taking the mast down proved problematic. It was already rimed with ice. I’d been wearing grippy gloves to assemble it too. Going forward, I would erect it with bare hands and use the grippy gloves to take it down. Problem solved. I was away from Carn Liath at 0905 and on towards my second Top.

There was quite a bit of descent and re-ascent required to gain Braigh Coire Chruinn-bhalgain GM/CS-009, over the 2.4km distance. I found the ascent tricky due to slippery rocks underfoot and being exposed to the full force of the wind. However, I summited to slightly calmer conditions at 1004. 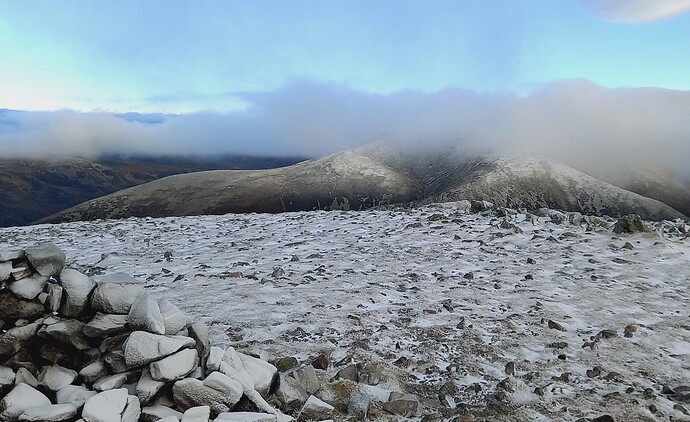 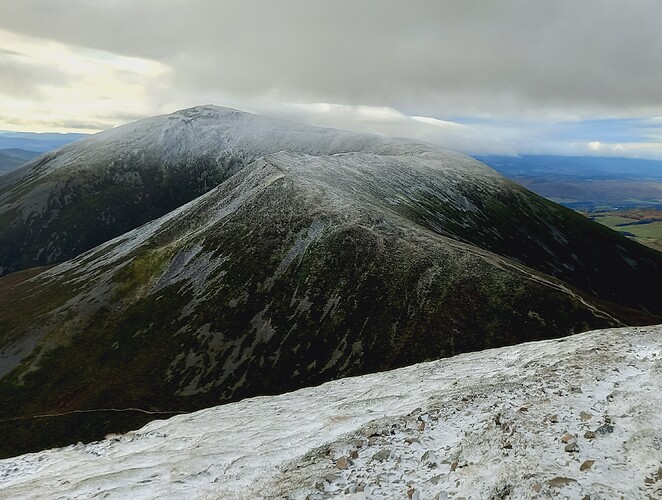 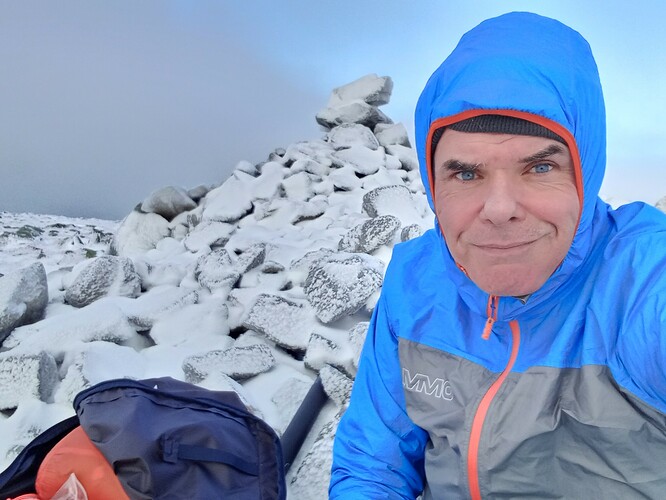 I was packed up and on my way by 1040, now convinced that I’d manage the three summits. I was running about 90 minutes ahead of schedule. This was a combination of short activation times and faster speed across the ground than anticipated. 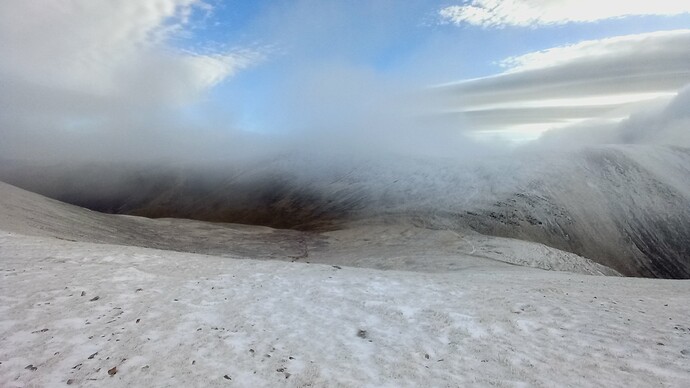 As I approached the broad ridge of Carn nan Gabhar the wind really strengthened, no doubt partly to the increased elevation. It was the kind of wind that tries to rip the rucksack from your back. 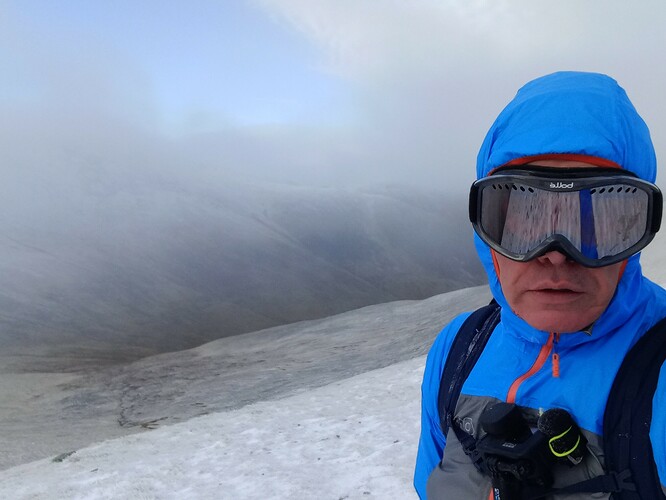 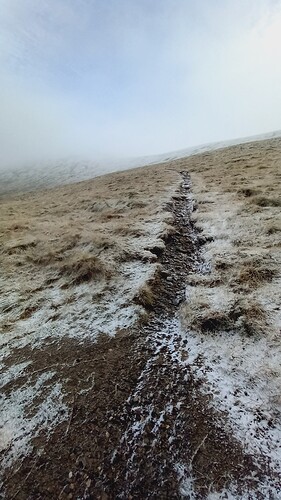 The summit ridge was blocky rocks, snow covered and awkward to move over. Having passed a large false summit cairn followed by another large cairn with a trig point on it, I reached the true summit a few hundred metres further on. All three summits are in the AZ, so I retreated to the middle summit, it having better protection from the elements. Arrival time 1140.

This being the highest and best placed summit, I decided to try for a quick activation on 2m. I screwed the extendable whip on to the ft-3d and hunkered down below the massive slabs to the south east of the cairn. My CQs were answered instantly, with a couple of Edinburgh Chasers and then a further four stations, the farthest being Berwick-upon-Tweed, 150km. I didnt log manually, instead trusting the radio to record the entire episode on its SD card.

The only thing was - it felt like I had unfinished business. I’d neglected the Super Chasers that been the only reason I’d qualified the previous two summits. I owed them the ten points.

I had time on my hands and hypothermia hadn’t quite set in, so I got up and started to look around for a way to set up a mast. Due to the rough bouldery and frozen ground, an unguyed mast would be the only solution. I found a crack in the summit block and wedged the base of the mast in. I loosely strung out my inverted V and hoisted the mast up as far as I dared, probably 4.5m max. The ropes on each end of the wires were simply jammed in behind gaps in rocks. The wires were very close to the ground, however I was going with the theory that true ground was several metres below the jumble of boulders.

The antenna was still in the air by the time I got my spot away, so I figured it would last five minutes, which was two minutes more than was needed to get F4WBN, @G0RQL, EA2EVM and EA2DT in the log. The guys were glad to work me and sounded relieved that I’d come back on the air. I was really glad that I’d completed all three summits on hf and taken the same Chasers along the way. 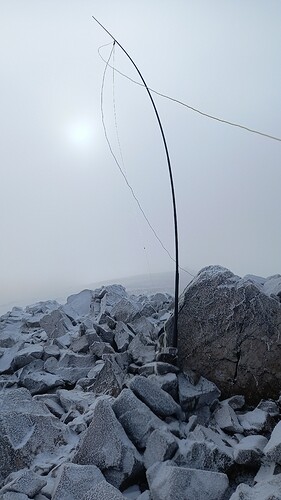 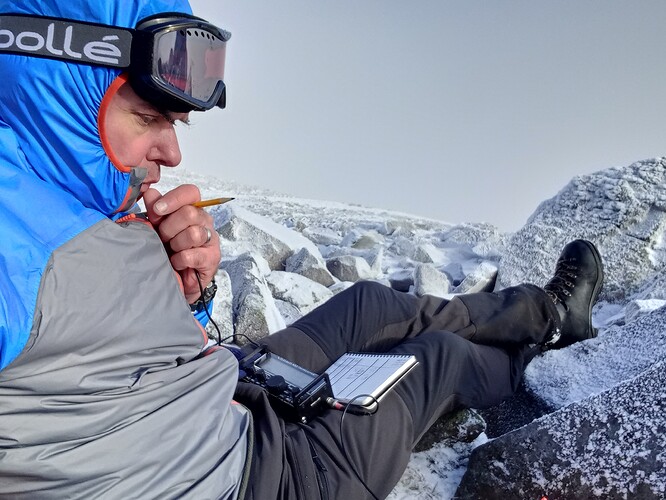 I packed up and got going around 1300, the clouds parting briefly and the wind dropping to virtually nothing within about 5 minutes of my departure. Go figure! 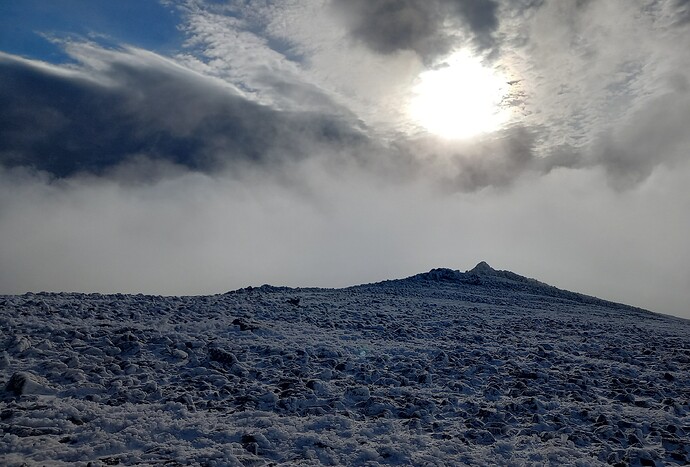 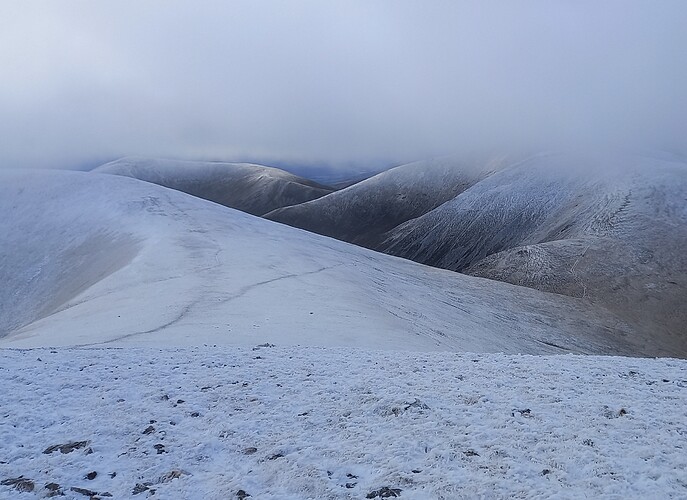 Once re-established at the col, it was a simple but tedious matter of heading south down a valley, onwards and downwards around the east side of Beinn Bheag and ultimately along the east and then southern sides of my first Top, Carn Liath. It’s a long way back, 8.5km from the col, initially on awful boggy, soft, peaty, and wet ground masquerading as a path. Thankfully a new path has been constructed from NN951706. 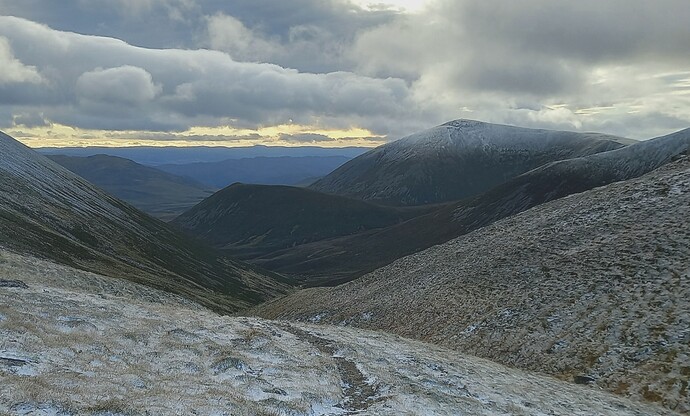 I’d been on my own all day, seen no one else and was getting highly bored with the walk, so decided to work my way through Queens Greatest Hits. I don’t carry music, so it was just me, singing accapelo, with the occasional drum roll from my walking sticks. I was just about to launch into the Operatic section of Bohemian Rhapsody when two walkers suddenly appeared from a path to the side!

Gear
I got away with a base layer, thin fleece and a lightweight waterproof all day.
Woolen hat and thin woolen gloves (with grippy fingers,/palms) worn most of the day.
Ski goggles essential.
I wore Scarpa Manta boots as I expected frozen ground. I can get double socks on under these.
I carried a Rab down jacket, spare hat and gloves as well as my bothy bag.

Can’t help thinking I got away with it, considering the band conditions!

24 hard earned points. A great report, many thanks.

Not a whisper heard from you here, the band was very long. What a fabulous day out!

Not a whisper heard from you here

Yes, I was surprised to work Don, @G0RQL down in Devon on the third summit. Only G station of the day on 40m.

Many thanks for another great report Fraser. Under the circumstances, short sharp activations are the order of the day. Unfortunately I’ve never mastered the technique and almost always overstay on the summit when weather conditions are telling me otherwise. There are some notable exceptions though, for example when Paul G4MD and I activated Dun Rig GM/SS-052 the weather was absolutely dire. We ran one band/mode each and shared an antenna to minimise the time spent on the summit. The problem is that such activations leave me with a strong sense of unfinished business and are memorable for what I consider to be the wrong reason.

Hi Fraser, thanks for your great report and photos. A great achievement for the day, well done.

Nice one Fraser. It looked bloomin Freezing so well done. I was very disappointed when I discovered I couldn’t hear you as I could hear the chasers calling you , but not to worry heh as that has to be a rarity.
Best 73

Great day out Fraser. I went up A9 to Inverness on 4th and thought Carn Liath was looking very inviting with a dusting of snow. Probably passed about the same time as you were climbing the path!

That is a clever feature being able to record audio with your Yaesu FT3, is the saved recording time stamped?

is the saved recording time stamped?

It’s a really handy feature when standing with a handheld and maybe a handheld beam, and no free hands (or frozen ones)…

The file is not time stamped, but as long as I note my start time (into the mic on the first CQ), I can work it out from there. The radio displays the elapsed time of the file during Log playback. Alternatively, play the file back on your PC.
Every time the radio is turned on, Record has to be selected. It will then record rx/tx audio onto a single file until the radio is turned off (well it has for me so far). The only thing to watch out for is really weak stations. Sometimes they are almost inaudible on playback. As long as you repeat their callsign back to them, you’ll be OK.

It’s actually fun listening to the QSO’s back home. Did I really say that?

As long as you repeat their callsign back to them,

Hi Fraser,
Let me give you an idea.
Saying the QSO time back to them too during each QSO solves the issue of the rig not recording the time. I’ve done that and it works fine.
73,

being able to record audio with your Yaesu FT3

It makes the radio very desirable when it comes time to replace my handy as I too have had handy contacts and no ability to easily log them. I was thinking of an FT70 for when my VX170 expires.

Then the other week I saw a VX170 on eBay with a dead battery for £30 and it’s now mine. It’s almost mint and doesn’t appear to have seen any use. at all. Fusion and voice recording will have to wait a bit longer!

It’s more than I can do and enjoy in one go Fraser so am impressed when I see people doing all three in one go. I have a bike-n-hike planned for CS-003 on its own next year after Gavin confirmed the “new” path to the big path. Not sure I like the steps on Carn Liath but something needed to be done the way the boots were degrading the original path. Wonderful feeling of isolation when you get further inland from Carn Liath onto the next two.

Saying the QSO time back to them too during each QSO

Yes, I’d thought of that. Never managed to get my brain to do that at the same time as talking, holding a radio, hand mic or yagi!

You can simply tell to your chaser the time of the QSO along with the signal report.
For instance: EA2IF good morning, thanks for your call, your report is 59 at 10:42.

Try that and you’ll see how easy it is.

Guru
P.S. I saw your spot today, went there for a S2S but couldn’t copy you… Shame!

great write up and lovely photos

Cheers! A bit different from your golf course.

We now have a film.
IncidentalIy, I was up that way again at the weekend. All of the snow had gone. 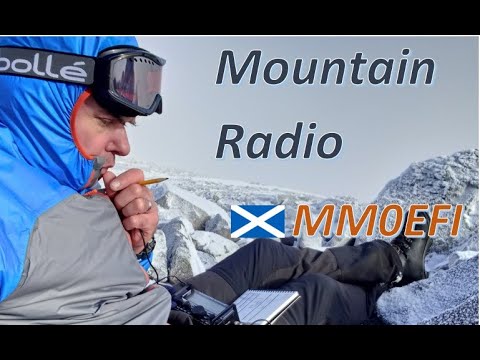 Hi Fraser, thanks for your great video report on your 3 activation’s. Well done and cheers