Behind the scenes: an anniversary S2S

Logging a qso takes a few seconds: just a short info interchange between the partners. But let’s see what’s behind one of those qso when you see the involved details of a specific and special qso.

I like reading the Reflector stories. Some provide useful information that enrich ham skills; some other are inspirational, as I read about milestones or successful activation from others.

When I rode that Colin, @M1BUU was about to celebrate his 25th Ham anniversary I thought I’d like to greet him on air. As the anniversary date was approaching, on July the 7th, I thought an activation would be even more exciting to honour him with a S2S qso by surprise.

I have never met Colin in person, but his nice stories here on the Reflector, and the fact he has built lots of radio kits (18 RockMites, and many others, right?) and shared his expertise work have created a truly admiration of this talented guy.

Despite weather was unsecure and propagation should be open to get the desired qso, I added another ingredient that would complete the perfect qso of this day: what about using my vintage SST-30 monoband rig to get this anniversary qso?

This would rise the level of the challenge as I had used my SST rig unsuccesfully in the past a couple of times and I failed because I didn’t qualified with it: the first time I didn’t get replies to my cq call and the second time I had to abruptly end and get out of the summit to scape from a sudden storm! Would I get a success this time?

II. The day has come

The day before the activation the weather was really bad: lot of rain and storms for many hours. Hopefully weather improved during the night and the sky was okay to go up to the summit when I woke up. No rain forecasted.

Colin published his alert to start at 10:30, therefore I tried to reach my summit in advance and start activating early so that perhaps he would find me already on frequency.

I decided to use my father’s car to get to the mountain. He is not using his car frequently and sometimes he is getting the battery low for that reason… I took the bike, went to his garage, grabbed his car and drove to the parking next the mountain. There we go.

This one is a nice trek, passing by a forest and next a stream in one section. 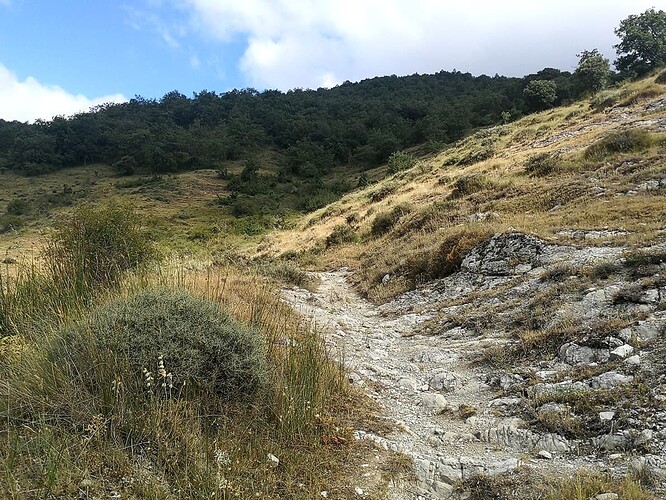 There were Flowers here and there and excellent views at the top, on a 45 minutes walk up the summit. 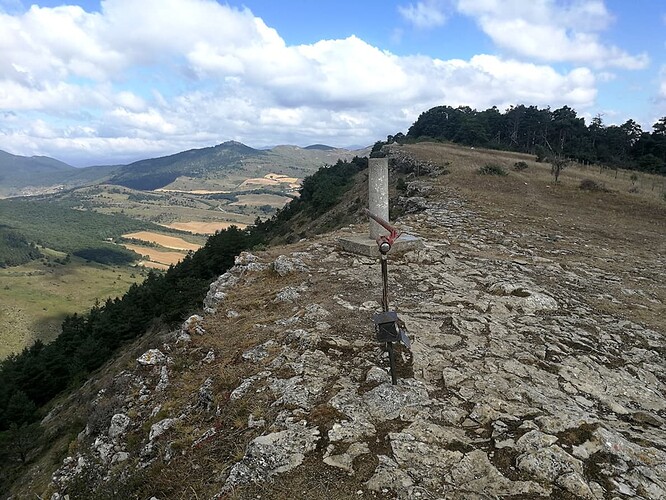 I arrived in the summit and installed the gear. The SST rig has no built-in keyer so I used the external and tiny PicoKeyer that I built. Antenna was my EFHW inverted vee, as usual. All done fast and troubleless.

When I switched the rig I heard nothing in my earphones. Tried off and on again and it stayed the same. What the heck? I sent some dits and there I heard them, but what about the RX? Then I remembered this rig is very narrow bandwidth, I think I measured 150 Hz in the past and therefore is almost zero noise in the absence of signals. What a fright! 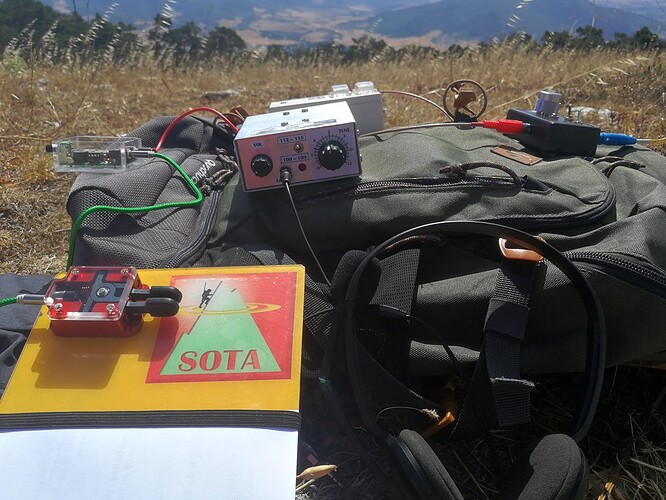 I started CQing and RBN spotted me at 9:48. I used the wonderful CW RBN tool to monitor my frequency readout as my SST rig doesn’t have a freq display. This rig has a VXO control that you set blind without any notice of where you are transmitting… I just settled the pot mid way and the spot revealed that I had just seat exactly on 10.115 MHz, great!

EA2DT made his way first in my log. Soon I was called for a S2S by Alejandro @EA4DON and Elena @EA4DOS, that were activating at EA2/ZG-016.

Then it was Bruno @HB9CBR the one calling me from HB/BE-156. The rig was working right!

I stayed on freq for half an hour and was chased by a few more.

A look at Sotawatch showed that Declan @EI6FR had started cqing next to me, at 10.114 MHz. I moved my VXO pot with care and centered his signal by ear. A few calls after the pile up was reduced and logged him S2S.

Then got back to my QRG and called CQ again. 15 minutes later I got a new S2S call from Richard @G4TGJ, from G/NP-005. Good to know that the path was open to UK.

When I was approaching the scheduled start of Colin’s activation, my cell phone rang but I was at the middle of a qso and I couldln’t reply. Soon my phone rang again: oh, my wife is calling, there must be something important.

I answered and she told me my father had called as he didn’t find his car on the garage and he needed it… Oh, gosh, he rarely uses it! I phoned him up and he confirmed that he needed the car straight away. What?

I told him I was in a SOTA and promised to get his car back as soon as possible.

Oh dear, any chance for the surprise S2S for Colin?

I was tempted to abort the activation and dismantle. I gave the last look at Sotawatch to see if there was any chance and I jumped when I saw Colin had just started CQing on 10.118 MHz!

I turned the VXO pot all his way up and found him calling there. The VXO turns unstable when you are at the end of the pot and there was a lot of drifting, sounding terrific with signals waving up and down.

With shaky fingers I tried to center his pitch, and hopefully after some gentle retouches the signal became stable.

In the mean time a huge pile up had developed, and Colin was replying one by one the stations. I called /P /P but Bruno made his way first with a great signal.

After him I called again but the thing was difficult. I tried and tried, wishing he would notice the /P request soon. Sorry guys for my repeated calls as I was running out of time.

I felt relieved when I finally was received by Colin, and I got my RST along with my aka “Iggy” on his reply, and with joy I gave him the report, and greet him for the 25 anniv. I even sent “SST rig” along in the message hoping he would get this info, as I know he owns the same rig in his collection.

Right after the qso was over, I switched the rig off and packed everything in a hurry.

A quick look to check If I had anything left and I did the fastest descent of this mountain ever. In 20 minutes I was breathless back in the car again.

Well, my father was tolerant with me, and I returned home in my bike with a big smile on my face. 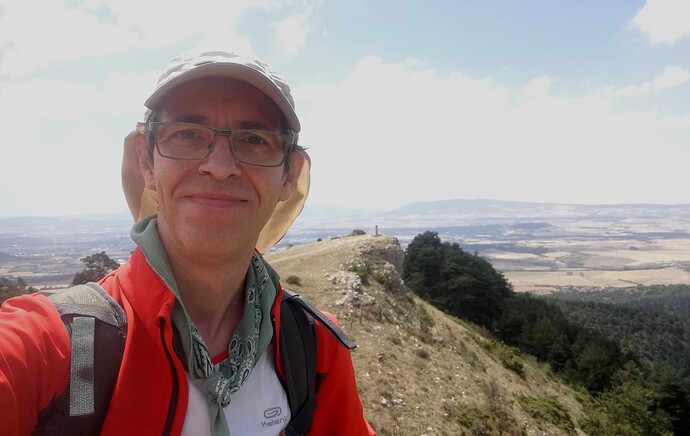 Most people don’t feel what’s the magic of amateur radio: is there anything special in a few seconds qso with somebody you don’t even know in person?

Tip of the day: July the 7th, SanFermin

By chance, the 7h of July is an important day in Pamplona. At 6:00 utc it is held the first out of eight running of the bulls during the well known Sanfermin Festival, a non-stop fiesta that extends between 6th and 14th of july. 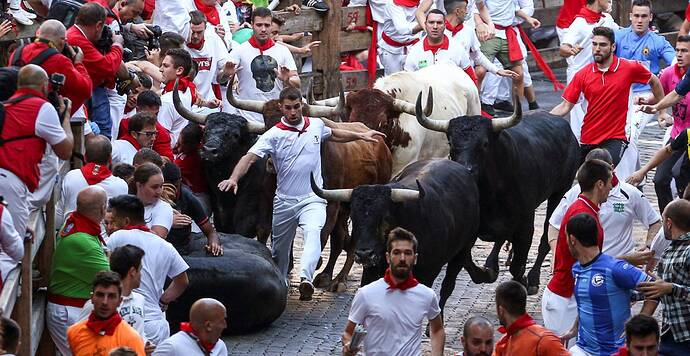 Later, the same day, the statue of Saint Fermin, patron of the city, is walked around the old town streets in a long procession, along with music and traditional events. 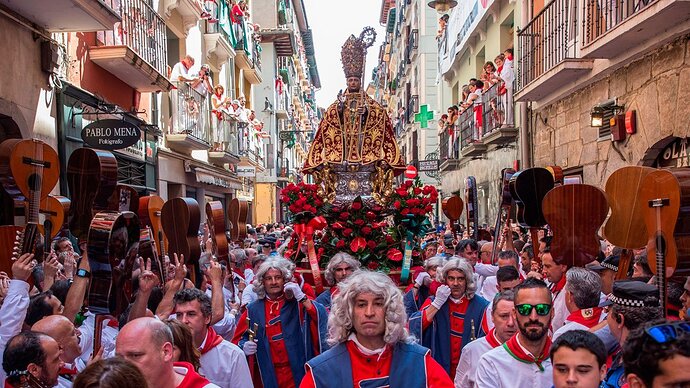 SOTA is a safe way out of this crowd…

Thank you for the emotional report.
Sometimes it’s like magic on the summit…
And sometimes I turn on the radio just in the moment the stn I’'m looking for starts cq-ing (cooincidence? No - I guess I’m superstitious).
With the years I learned to appreciate activations that did not turn out that well.
73 Martin

…for the wonderful report…

And to Colin @M1BUU: congratulations on your anniversary … and thank you very much for your great reports.

Thanks for the S2S yesterday. You were my first QSO and Colin was second. Then the sheep ate my antenna! I wrote about that in my activation report.

Hi Richard,
I was very happy to get your call, as that opened my hope to be able to catch Colin later…
So sad to know your antenna was chewed by that sheep, she must be some sort of RF addicted, I’m afraid. I am glad she was kind to wait for the S2S first, hi!

Looking forward for our next qso. Perhaps you need to apply sheep repelent at both antenna ends, and to your gear, just in case, for future outings.

Well, I don’t really know what to say!

Thank you Ignacio! Thanks for the report too!

I do know the effort that is sometimes required just to get that brief moment on air to complete a contact. I once went to Arnside Knott, G/LD-058, to try to get a contact with friends from Cambridge who were on a DXpedition. I did manage to work VP2MUW in the end. A special custom QSL card was made in my honour and I treasure it! 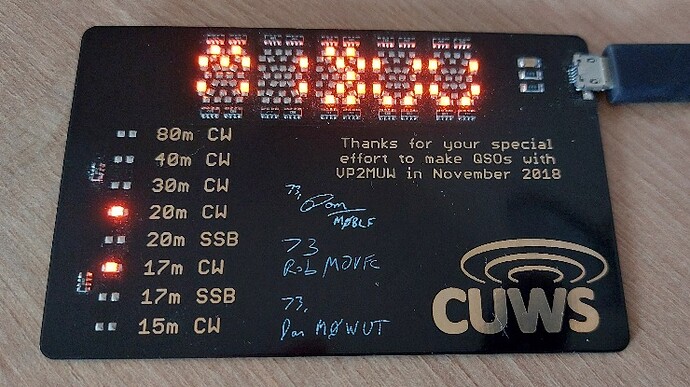 I was using my FT-817 yesterday, as my son was with me and the FT-817 has a speaker built in. I need not have bothered with the FT-817 as the military jets provided the entertainment for my son whilst I did radio! I wasn’t using headphones, so I found that my ability to copy CW was diminished. To save my battery, I had the power level set at 2.5 watts.

I really appreciate the QSO Ignacio, I did hear /P a few times, but it seemed to me that there were a couple of SOTA stations calling me. It wasn’t until later in my activation that I discovered that I had the attenuator setting turned on! I thought the bands seemed quiet!

I’d say that there was a lot of luck all round! I did 30m because Richard, G4TGJ, had suggested an S2S from Ingleborough via a private message. I suffered badly from hayfever on the day before (Wednesday) and I was considering cancelling my activation. I felt very tired yesterday, so I didn’t rush at all, I wasn’t conscious of my alerted activity time.

Your SST sounded good to me, no drifting or chirping, although QSB did seem to strike just at the wrong time! 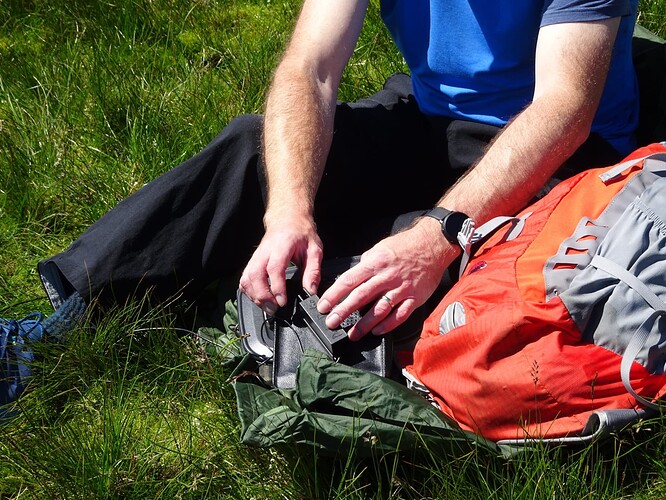 Once again, a great demonstration of the friendship across borders that ham radio promotes.

Thanks Colin for your report and photos, a great read.