The forecast was for another hot day, but we wanted something easier after yesterday’s exertions, so we chose to do two little one-point summits on the north of Mull that would both be completes for us. In terms of one-point summits they turned out to be one of the nicest we have done and one of the nastiest.

But first we needed to stock up on food, so our first stop was Tobermory. It was hot (28 degrees even by the sea) and Tobermory was heaving, but we managed to find somewhere to park in the quayside carpark, so we could do the tourist photo bit before heading to the Co-op and then to the hills. We walked the length of the harbour round to the ferry port and returned via the Co-op. Back at the car we carefully packed the food into a cold box with plenty of cold packs and drove out along the B8073 aiming for GM/SI-153 'S Airde Beinn. We were looking for a small parking space just east of a ruined cottage at around NM475527, but initially missed it despite there being a car parked in it, so we turned round and squeezed in behind it (there is just room for two cars, but there is more parking in a disused quarry about 300m east). 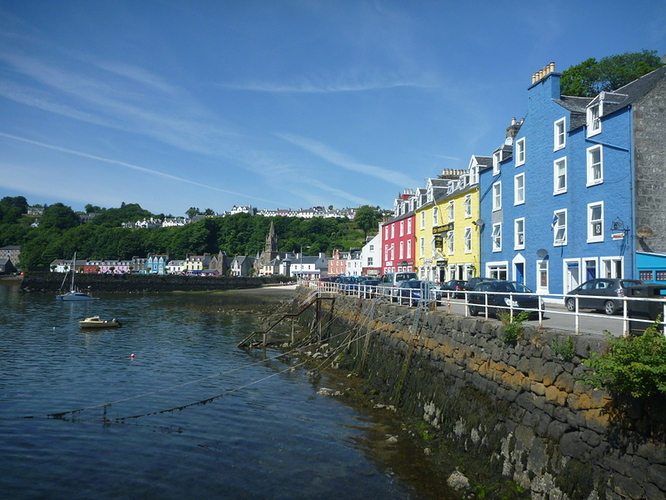 As we loaded up, the owner of the other car returned: “didn’t I see you on Ben More the other day?” – we are a bit distinctive with our poles! We headed through the gate and along the path, which was grassy to begin with but then became slightly boggier – probably very boggy normally, but we were there after a dry spell! The path gently climbed as it meandered its way towards a nice new looking gate, behind which the proper hill looked inviting. 'S Airde Beinn is the oval remains of a volcanic vent with a lake in the middle which drains to the south. The highest point of the rim is to the left, so when the path divided we headed left, and were soon rewarded with lovely views of the lake and the surrounding terrain. This has to rank as one of the best little summits we’ve done. As well as the excellent views there were lots of dragonflies and damselflies of several different species. The radio highlights were 2m FM S2Ses with Jamie MM/N6JFD/P on Ben Nevis (definitely line of sight!) and Andrew GM0UDL/P on Buachaille Etive Beag in Glencoe. After the 2 S2S there was just one more VHF contact so after Martyn had scraped 5 contacts on 60m Caroline moved to 40m with a slightly better run of 11 contacts. A final call on 2m VHF produced one more contact to achieve 2m qualification too. 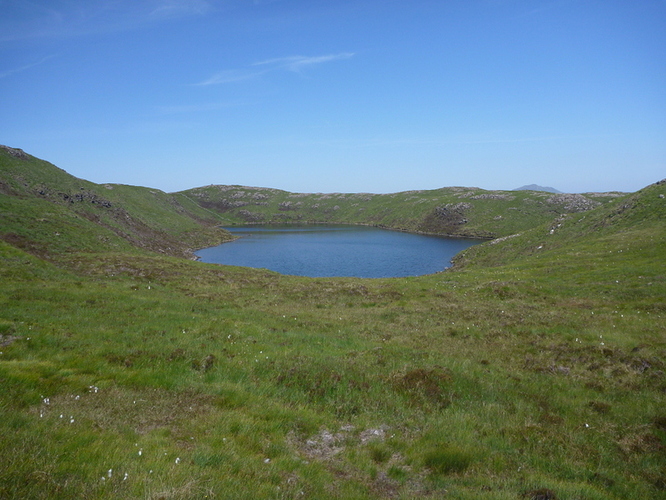 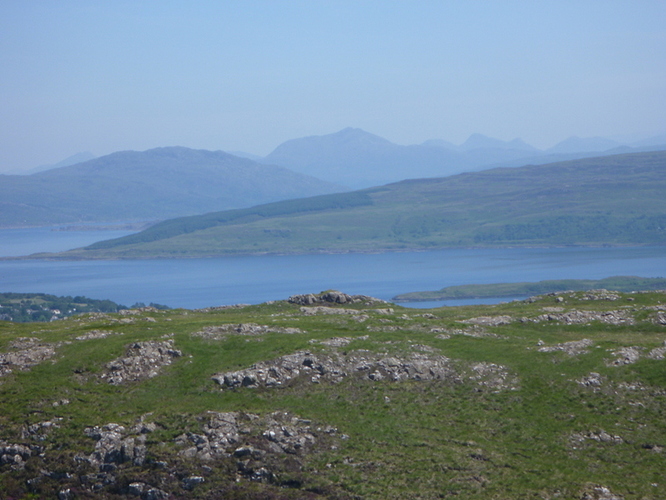 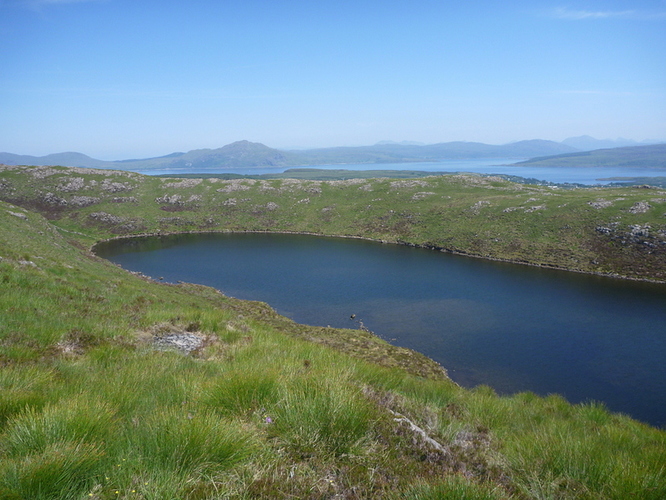 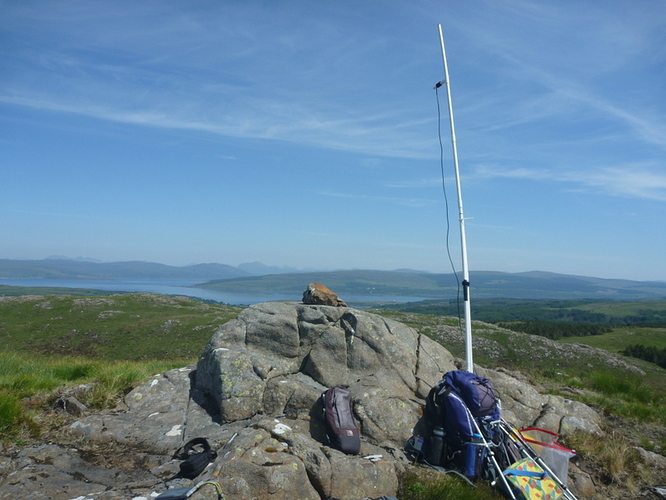 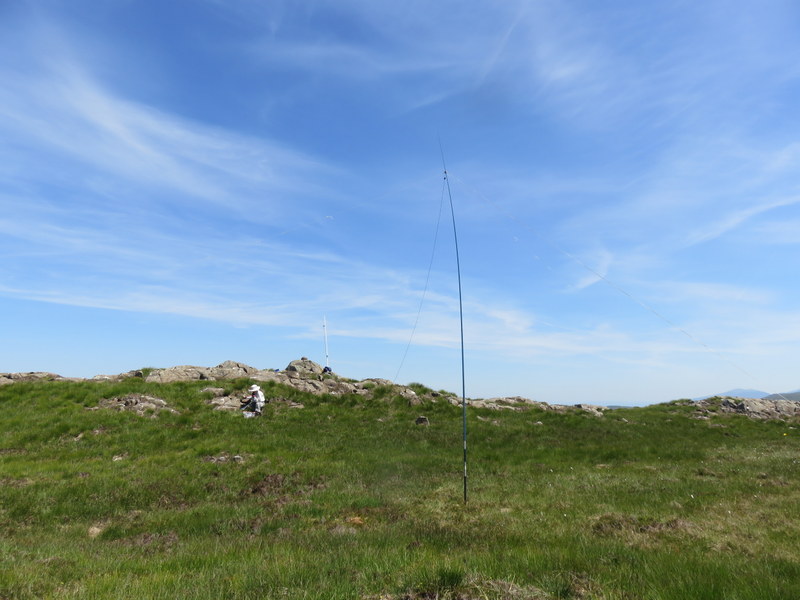 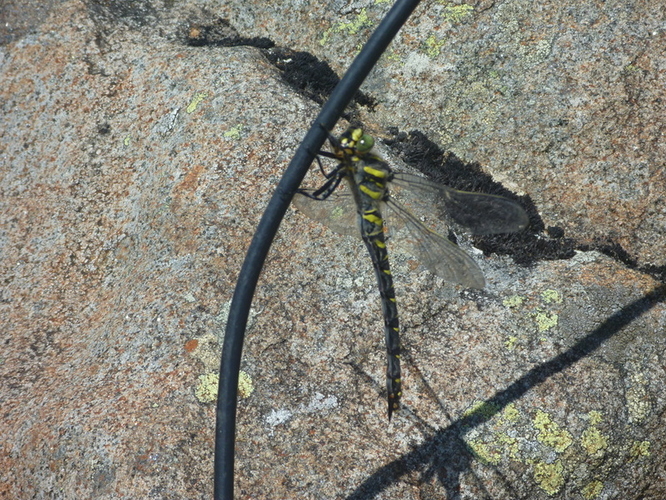 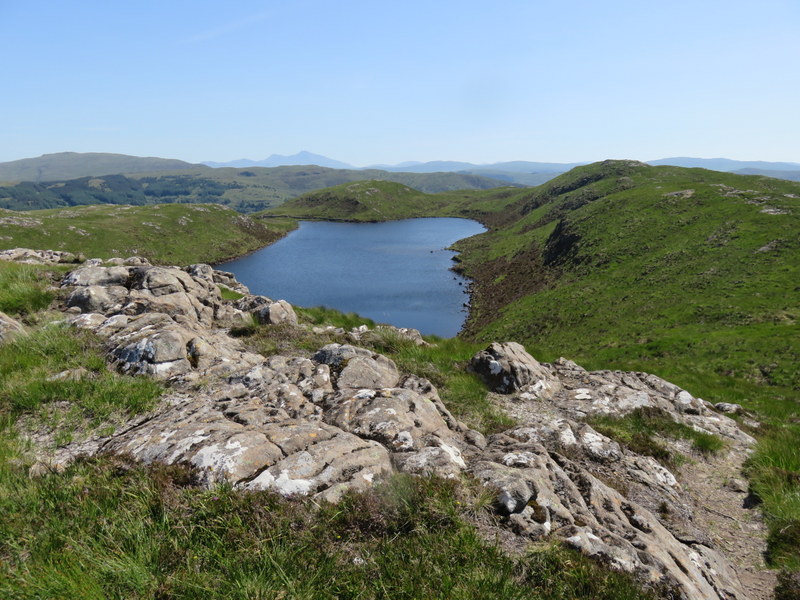 We didn’t want to leave but had another summit to do. We took our time and lots of photos walking round the rim of the vent before descending back to the gate and returning along the slightly boggy path. We met another couple on their way up who told us that they loved the hill so much they tried to visit it every year!

Our next target was Tom nan Fitheach, so we headed west on the single track B8073, which had a high density of hairpin bends. At Dervaig we turned south on the minor road: we were expecting to have some difficulty finding somewhere to park and contemplated the cattle grid at NM457480 but carried on to look for the spot recommended by Gerald G4OIG at NM462480. We could not see how to park our car there without blocking the passing place, but about 100m further on we found a passing place where we could back the car into a grassier area.

We walked back up the road to locate the forest ride Gerald had used. The ride looked green but access to the ride was quite overgrown. We fought our way through the vegetation, only to discover that the green of the ride was deep bracken. As we got higher the bracken got denser and higher and we tried going through the trees, but that was difficult with my vertical antenna and Martyn’s wide pole load, and there were rocks to negotiate. We fought more bracken crossing a horizontal ride but returned to the trees, but they ran out and we were faced with a steep slope of dense head high bracken with a few heathery rocky outcrops on Lag Liath. We tried to make our way through it heading for one of the rocky outcrops, but it was very hard work. The rocky outcrop only offered mild relief as it turned out to be unstable, and once up it Caroline decided that she couldn’t go back that way. Beyond it there was more bracken, but it was lower and the gradient easier, and led to a grassy flattish top which provided a more pleasant walk to the unmarked summit. This was the lowest hill of our Mull visit, but there were reasonable views, with Ben More again on the skyline. 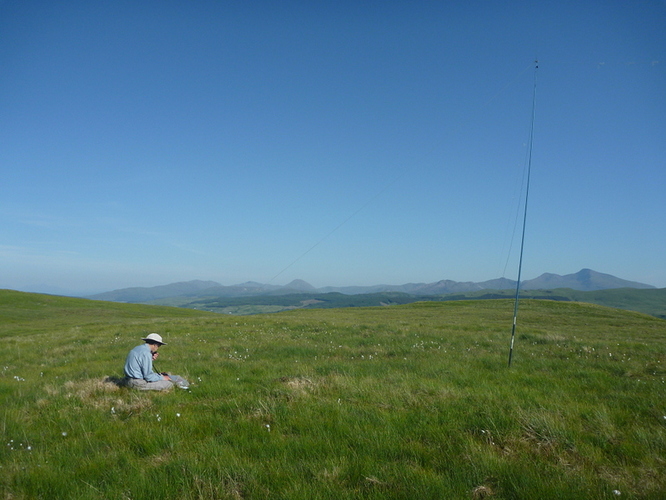 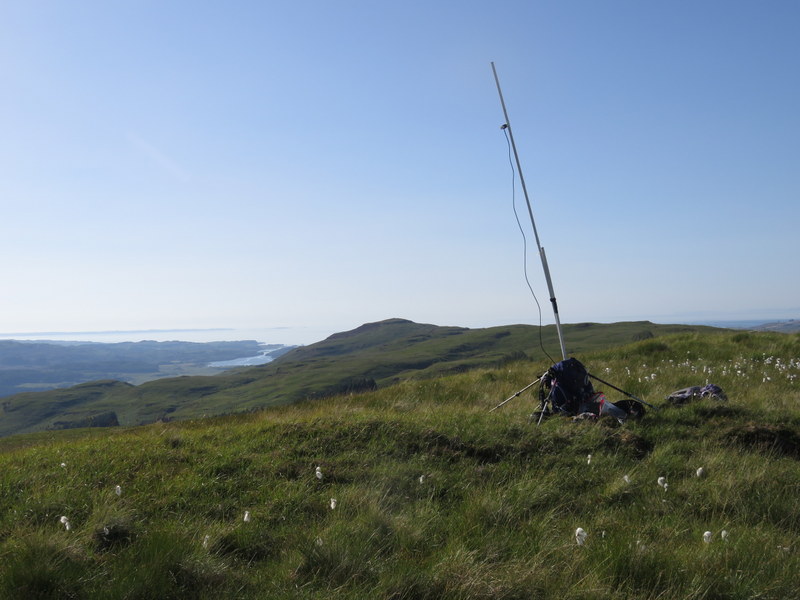 There was nothing to support the VHF antenna against, so Caroline used the rucksack for support, but could only raise 3 contacts on VHF. There was plenty of space for HF, so Caroline moved to 40m after Martyn had qualified with 4 contacts on 60m. 40m was less good than earlier with just 5 contacts. Martyn finished off the activation with 3 contacts on 20m.

It was pleasant at the summit, but we knew we had to face the descent. We tried dropping down on the slope before getting back to the outcrops but were soon tangling up in a mixture of high bracken and the edges of the trees. It was very hard work and steep; at one stage Caroline lost her footing and slid down being braked by the bracken, and with some laughter decided trying to slide deliberately, but after 2 or 3 more little slides decided that perhaps she should try to be sensible and try to remain on her feet. Once we were by the main block of trees we tried going through them but this time we were on the east side of the ride and there were more interfering branches, and we tried the ride: still hard work, but easier down than up. By the time we were back at the road we were exhausted, hot and covered with green from the bracken. We agreed that that had been the hardest two miles that we had ever walked. I don’t think we’ll be doing that one again.

…the spot recommended by Gerald G4OIG at NM462480. We could not see how to park our car there without blocking the passing place, but about 100m further on we found a passing place where we could back the car into a grassier area.

Now you mention it, I seem to recall that we did the same. Obviously I didn’t amend the grid reference on the itinerary, probably because the difference was not very much.

I am sorry that the bracken was so much higher than when Paul and I ascended to the summit. Obviously the damp followed by the warmth this year had accelerated the growth. I checked my photos and found that I hadn’t taken any on the ascent or the descent, but I don’t recall the vegetation being that dense or indeed much more than a couple of feet high.

Many thanks for another lovely report. The memories came flooding back. :-)

You probably realise but bracken is the favoured home of the tick - you do need to check you haven’t got an unwanted passenger.

Reading your report that is one summit that I will not include on my “must do” list; SI-153 sounds more like my sort of hill

You probably realise but bracken is the favoured home of the tick - you do need to check you haven’t got an unwanted passenger.

We gave each other a good check over after that hill, but were surprised to find no sign of ticks. However the following day on a much nicer walk (report in preparation) with no adverse vegetation we picked up one each. They are good at getting in unexpected and awkward places!

Reading your report that is one summit that I will not include on my “must do” list; SI-153 sounds more like my sort of hill

We tend to prefer uniques, but SI-153 is one I can see us repeating. Definitely recommended for anyone visiting Mull.