All:
We (Barb-AE7AQ & myself) just returned from a fun backpacking-SOTA trip that I thought to share. We had a terrific time, were able to see a lot of new country & reconnoiter some new trails. The area was nicely uncrowded. Two guys walked on the trail past our camp on Day-3, and we saw a few folks along the main trail on the way out (Day-7) – other than that we were wonderfully alone. Following is a summary:

Day-1: Hiked up the N. Fk. Of the Blackfoot to near the Carmichael Guard Station. This is about a 14.5 mi. hike on a nice trail. It rained some & was pouring when we setup our tent. It rained lightly most of the night. 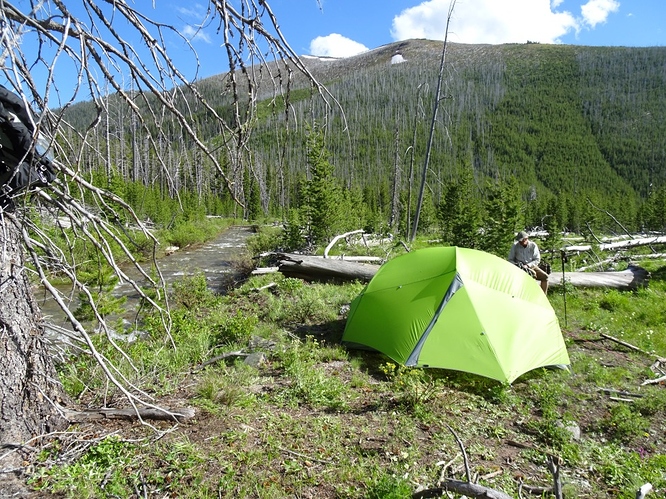 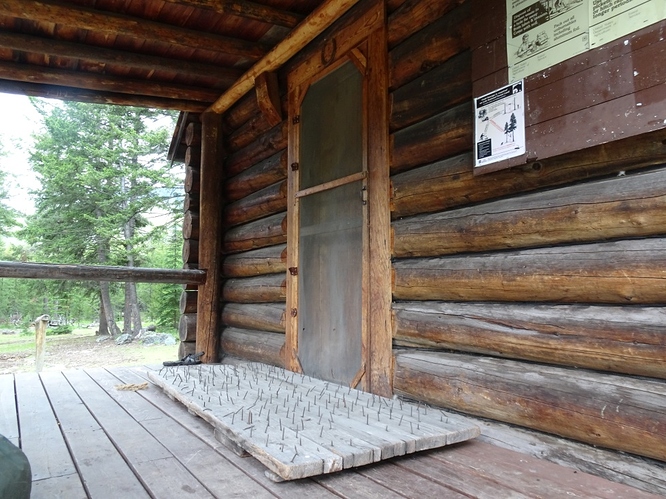 Day-2: It was hard to get started as the morning was cold & rainy. We had planned to climb Evans Pk., but decided to not try it since the ridge looked steep enough to be unpleasant when wet & windy. The Wx was quite variable. We found a decent trail up & some unmarked spur trails that may offer options if/when we return. Activated W7M/CL-195 (on the same ridge) instead. Managed 21 qso’s including several S2S’s. 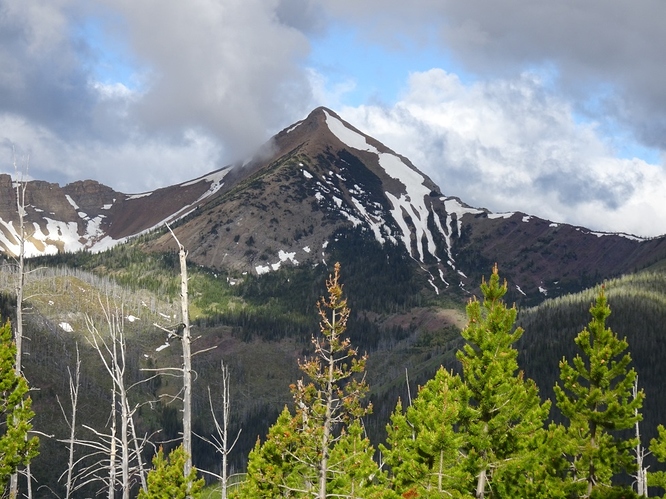 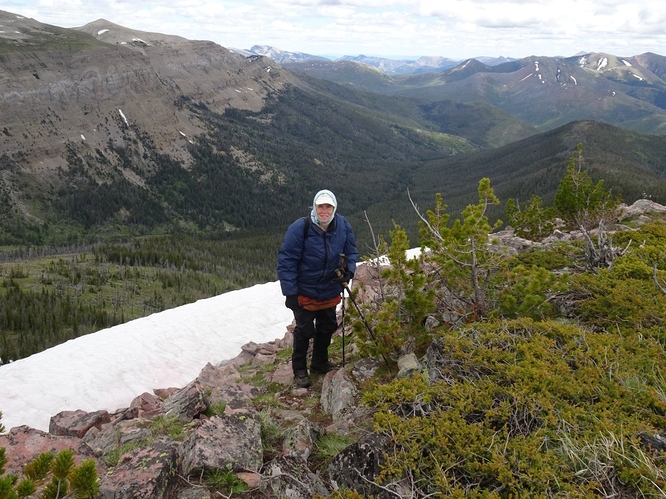 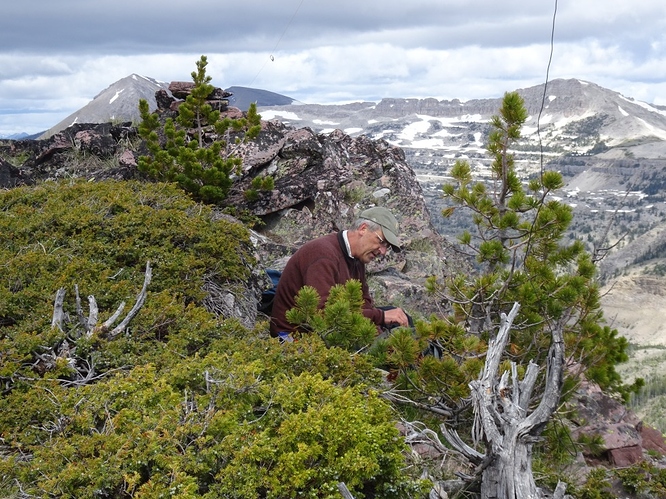 Day-3: Hiked up the N. Fk. (Tobacco Valley) to activate W7M/CL-074. We had planned to camp up there, but decided to try it as a day-hike. This was a good decision – there were no good, safe campsites due to lots of snags. The summit was super windy – we were staggering about like a couple of drunks! I was able to get 17 qso’s into the log, including a very exciting S2S with Gary-W0MNA & Martha-W0ERI on Strawberry Butte outside of Helena. I was also able to work Bruce-N7RR – whom we are looking forward to seeing again at the Glacier Hamfest.

Day-4: Woke up to a light frost & relocated our camp 2.7 miles up Cooney Creek. Cooney Creek did not burn in 1988 like so much of the Scapegoat & was quite nice. Our campsite was super secluded. We used this as a rest day & I (unfortunately) managed to get an unpleasant puncture wound in the web of my hand when clearing some branches. The hole wouldn’t stay closed - I cleaned it with alcohol & was able to strap it closed with closure strips. Had dinner in a sleet/rain mix. 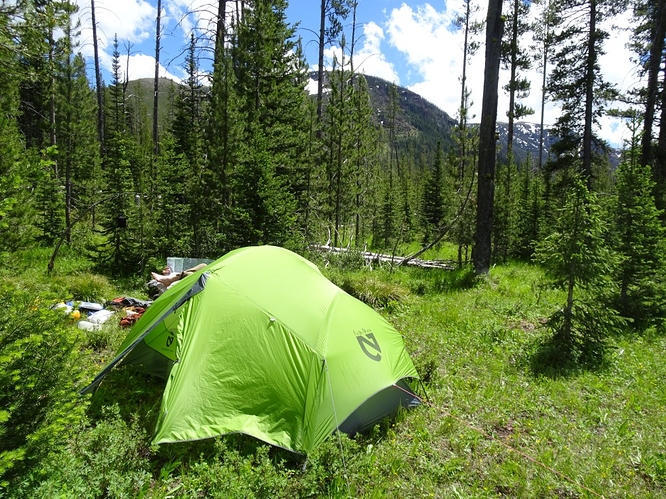 Day-5: Woke up to heavier frost & hiked up the Cooney Creek trail to the Olson-Crow Saddle. Climbed Olson – this was a nice climb. We used our micro-spikes to cross a gentle snowfield – this saved us some time by avoiding the need to climb down & around. The views were fabulous & I made about 24-qso’s including one 2m qso with Rex-KI0BJ in Helena. We yell “hello” a lot to let the bears know where we are – I think this worked, as we (on the descent) saw a nearby snowfield that had what looked like (without getting too close) fresh grizzly tracks & a spot where he had laid down. The Wx was nice all day. 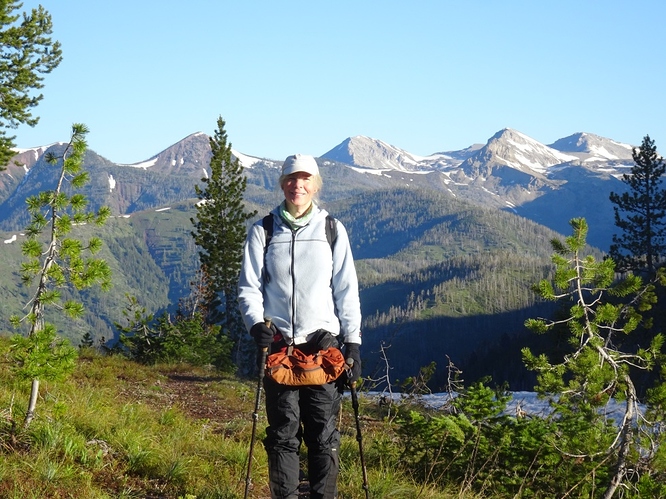 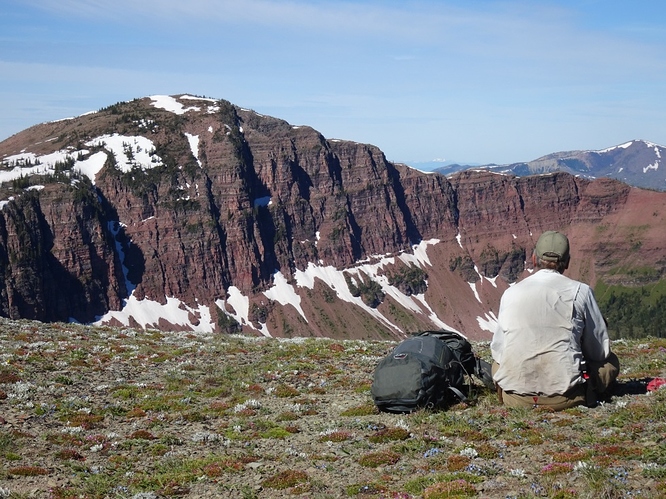 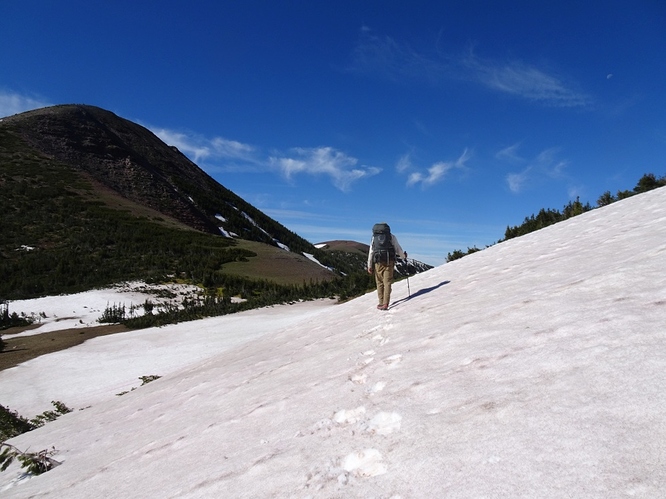 Day-6: Climbed Galusha Peak. This was a very fun ridge hike (with lots of up & down) that was quite spectacular. One of the high-meadows had been freshly “rototilled” by a grizzly bear digging for roots. The final ascent was a very steep & scenic (with a good trail) traverse of the north-facing cliffs with their snow-filled couloirs. The Wx was quite warm & very fine. I was able to make 25-qso’s, including another fun S2S with Gary & Martha on Granite Butte – where Barb & I stayed in 2017 just before (and for) our 30-year anniversary. 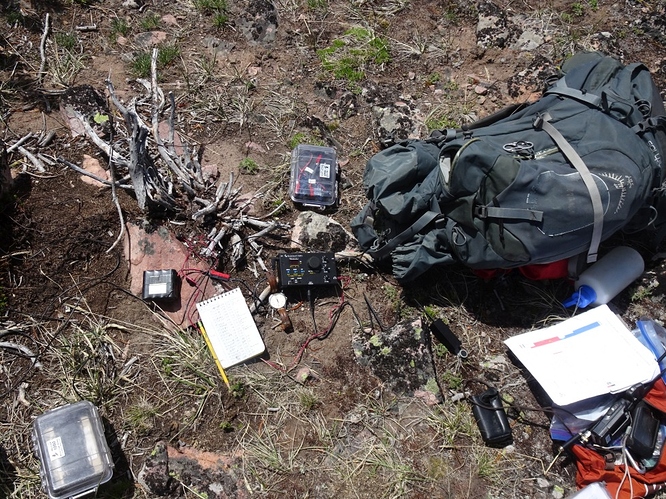 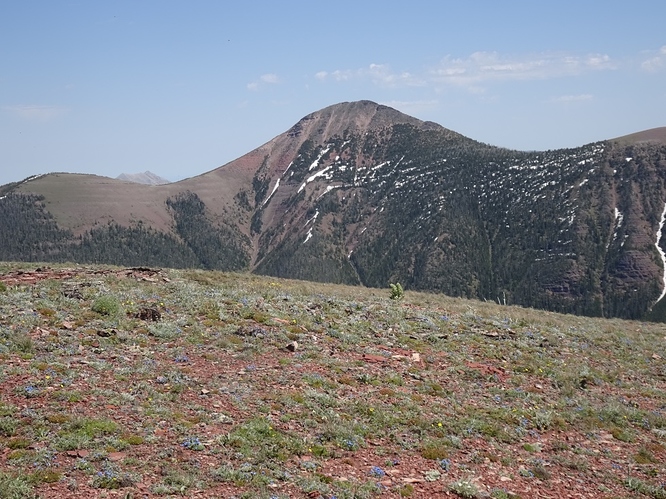 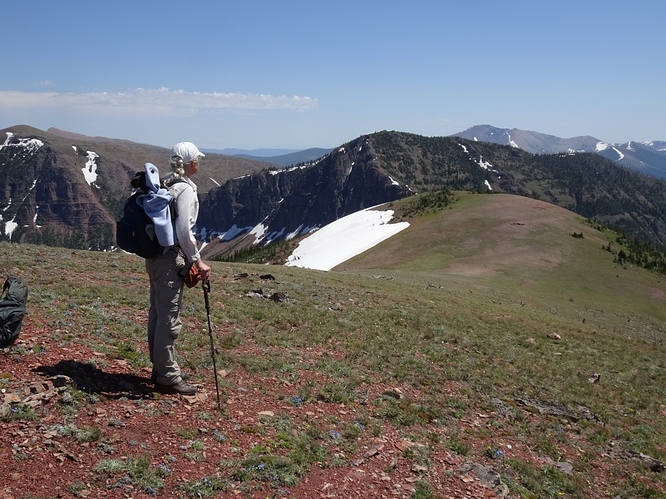 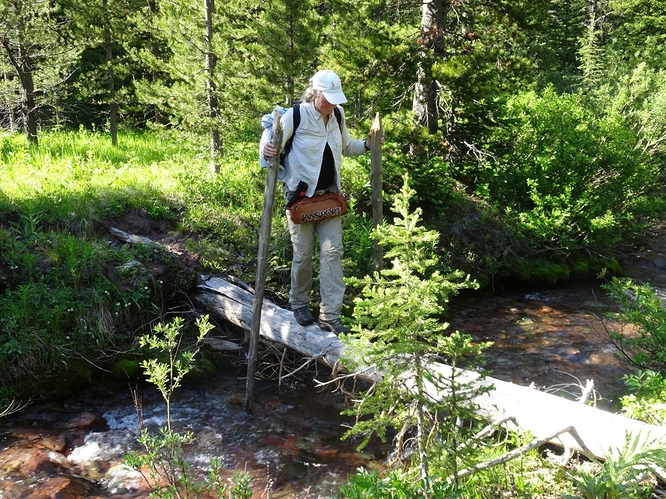 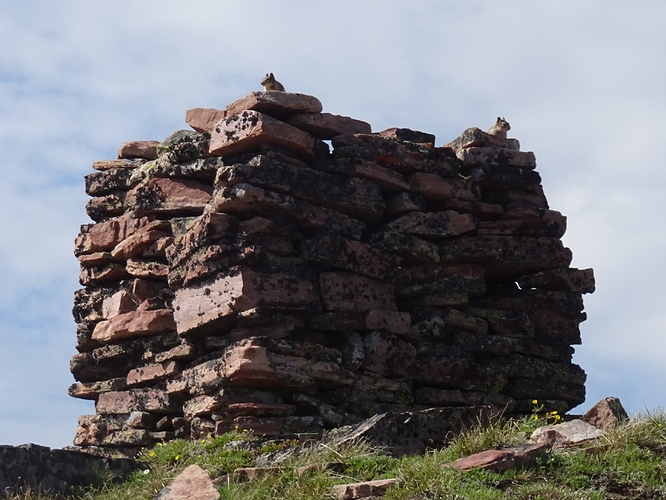 Day-7: Was super-hot. We had planned to camp on the way out & activate Falls Point, but were making such good time hiking that we decided to head out. We saw grizzly tracks in the dried mud from the earlier rains – it is a good reminder that they are sometimes down low also. We were home by 5:00! 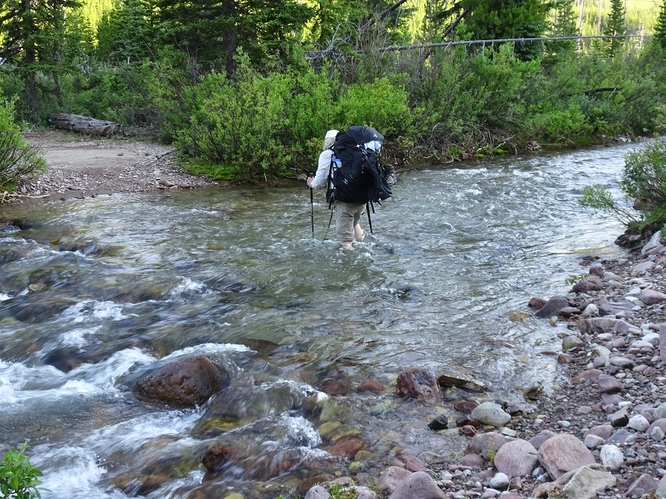 Hi There,
Just wanted to thank you for the beautiful pictures and what your Backpacking story.
We sit here in a clean and warm Ham Shack not knowing what you folks go through to get to these summits! I have been a Chaser just over a year now and having a BLAST! this is my 56th year in Ham Radio. I was lucky to get you on CL-074 and CL-195.I called my wife in her to see you pictures. We like the Galusha Lookouts,WOW are they Mountain Lions on Top? I’ am going on the web later to look it up!
Hope your hand is doing better! Look for you again and bring your camera !!
73 Gary N2ESE

Barb & Rob,
Very nice report, indeed! Having the pix is a big plus.
Listening for you on the bands.
Best, Ken

Great trip report Rob. Definitely missed just a few areas on my trip down last month, which are headed onto my must do list.

Thanks for posting this!

As luck would have it, I just came to post about a backpacking trip I am doing with some friends this weekend. We will be in Great Smoky Mountains National Park. We are excited and all systems go, but this gives even more inspiration.

Great trip! Thanks so much for sharing, sounds like you two had some variable weather to keep it more interesting. I too love to backpack and work qrp when I am able to. Looking forward to trip in Sierra later this summer/Early fall.
73
Mark / K6MTS