Taking advantage of the good early Autumn weather, I managed to complete four SOTA expeditions in September/October. Six peaks were activated, all of which were first time activations. Two expeditions were completed in September with three summits activated in total. September is a pretty decent month for hillwalking – the dreaded midge have now gone, it’s still reasonably mild weather and the days are still long enough to complete a good 5-7hour hike including an activation or two without too much pressure. September also tends to be a reasonably dry month in these parts, and this year has been no exception. What rain there was, at least did the decent thing and fell during the week for a change!

Binn Mhor is accessed from the Western Way walking route that cuts through the Maamturks just to the west. Binn Mhor is the second peak normally completed as part of the annual marathon Maamturks walk. At the parking lay-by I chatted with a couple who were intrigued by the strange looking poles I was brandishing. When I told them what I was planning, we recalled the accidental death of Mike Crosby, EI3GP during the 1999 Maamturk walk. Mike had been on AREN emergency comms duty for the event. A reminder that things can and do go wrong, despite the best of planning and preparation.
I followed the Western Way trail a couple of kms north as far as the Maumean chapel and grotto then took a sharp right turn aiming straight for the base of Binn Mhor. A tough 400m scramble follows over rocky outcrops and peat cover. The slope eases in the last 100m or so and the summit itself is a rocky plateau. Veins of the local Connemara marble run though the exposed strata. There was a strong breeze blowing from SW and the operating position was set up on the northern slope, a few metres below the summit in the lea of the trig point. Conditions not great - Just five qso’s to report on this activation, 40m and 20m ssb, with two S2S contacts - G3RDQ/P on G/SC-005 and OM/SQ9MDF/P on OM/ZA-009. A descent zig-zagging around the outcrops and would be tricky in foggy conditions. Up and down in 4½ hours and a great afternoon’s walk. 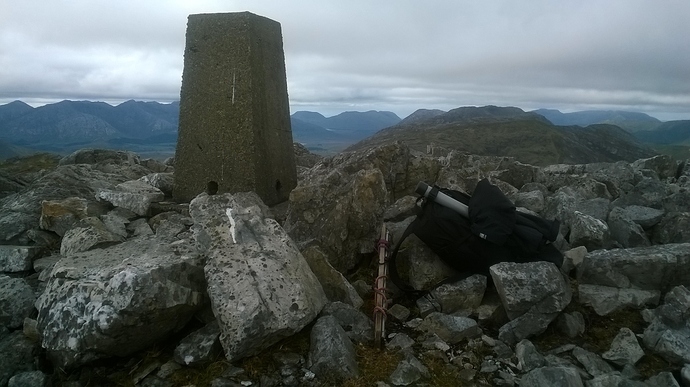 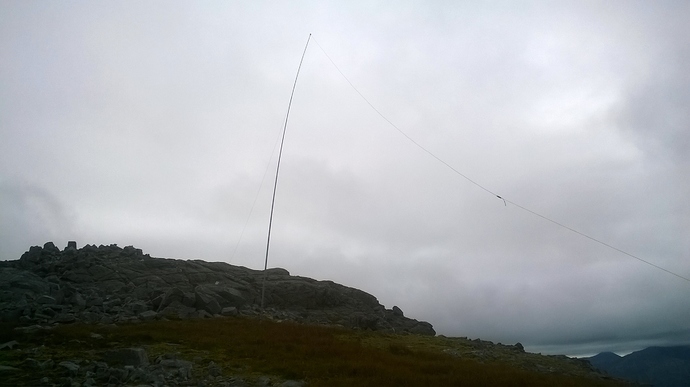 After an early start, followed by a two-hour drive, I begin this climb at around 9:30. I was amazed to find the remote parking area packed with cars. It turned out that there was a scout group weekend camp in the valley. I could see their encampment as I climbed but I never actually encountered them during the walk.
The original plan was to activate Bencullagh and Muckanaght, but leave open the possibility of also pushing on for an extra 10 pointer, Benbaun EI/IW-006. The initial walk to the base of Bencullagh is across a squelchy tussocky bog taking over an hour and sapping the energy despite the gentle gradient. Once this has been conquered, what follows is a very steep climb up a grassy slope to a saddle point west of Bencullagh. From the saddle fantastic views open up to the north and west. Turning right here, there is another short scramble up a rocky slope to the summit of Bencullagh. No trig point here, just a large pile of stones.
Poor HF conditions, just seven 20m qso’s to report including three S2S contacts, DH7FK/P on DM/BW-168, SQ6PLD/P on SP/SS-019 and OK2PDT/P on OK/KR-075. 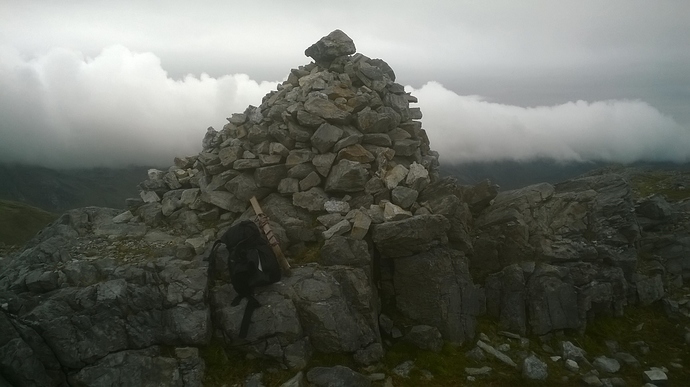 Moving onwards, another hour was taken descending to the saddle between Bencullagh and Muckanaght and climbing up to the grass covered summit for activation number 2. On the way, I met a group of rock climbers who were tackling one of the cliffs on the north face of the saddle. Only a small pile of stones marks the summit of Muckanaght. Despite the grassy cover, it was tricky to find a soft spot to drive home the wooden stake I use to support the travel mast. Seven more qso’s here, mainly 20m, including a S2S with IW2NEF/P on I/LO-304. Had a quick 40m qso with GB0HBL (Railways on the Air) in Cornwall and a first 15m SOTA contact, R3GMT. 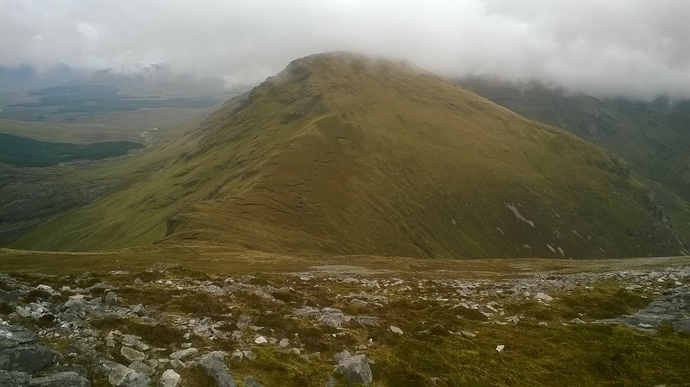 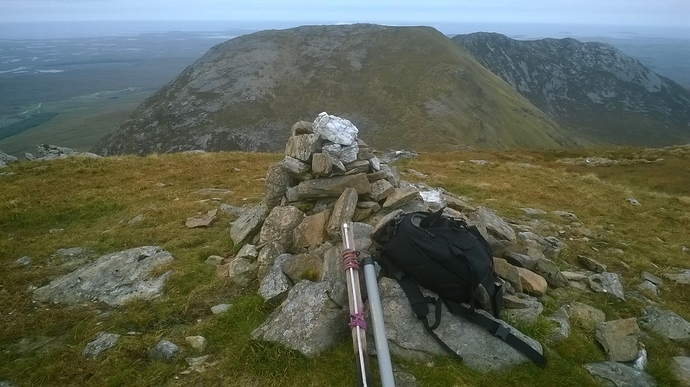 Cloud covered Benbaun was at least another 90 minutes hike away, and knowing that I had to re-trace the same route home, I took the safety first option and called it a day - despite the temptation of another 10 points. I finished my lunch, lightened my load by depleting my water supplies and headed for home. Back over the summit of Bencullagh again, and descended the steep slope to the valley below, followed by the long trudge across the boggy slope to the car. Up and down in about 7 hours.

The first of two for October, venturing a little further for this outing, I headed to the north of Clew Bay in County Mayo (the opposite side of Clew Bay from Croagh Patrick, by far Ireland’s busiest mountain). Here lies the Nephin Beg range of mountains. These tend to be somewhat less visited as they are more remote from the larger towns. The route planned was the Glendahurk Horseshoe route which is a 10 mile hike taking in 3 peaks, Bengorm, Corranabinnia and Corranabinnia SW Top.
I chose to tackle the route in an anticlockwise direction, taking in Bengorm first, to get the easy points in the bag first. Bengorm is a fairly gentle, but long walk up a tussocky grass and peat slope. The mountain was cloud covered as I climbed with a few false peaks before the summit was reached. A pile of stones marks the summit. I descended a little to the west to get out of the easterly wind that was blowing over the summit, occasionally letting the sun poke through. Getting the qso’s was hard work. Conditions on 20m were lousy, but the requisite 4 were logged without too much difficulty in the cold wind. With ¾ of the walk still to complete I packed up to move on. Emerging from my operating position I was met by a walking group at the summit, led by an ex-army officer. I chatted with him for a few minutes – he was curious about my choice of walking poles! His group were going the other way, and I headed off into the mist. 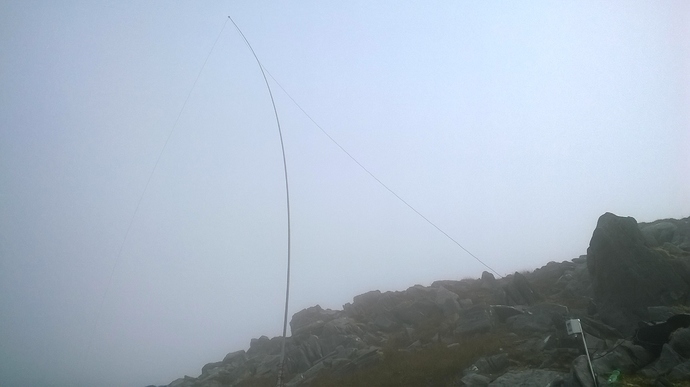 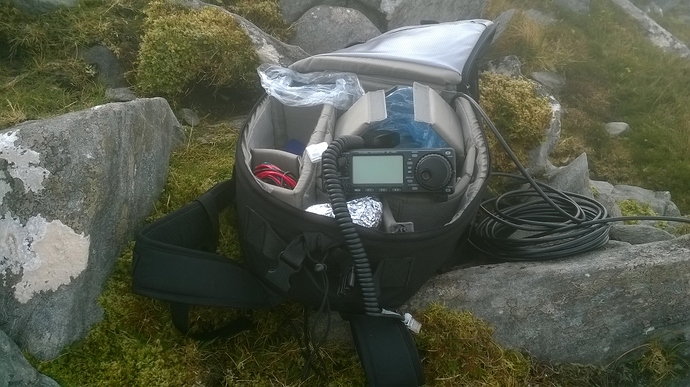 Fortunately the sky cleared and sun briefly came out while I pushed on for Corranabinnia. This was a spectacular sight emerging from the clouds. A tough climb followed and it was into the clouds again as I reached the rocky summit. A trig point marks the summit here. A stiff wind was blowing so I made for the sheltered western side. Antenna setup was tricky here as it was quite a steep right up to the summit with nowhere obvious to drive home the wooden stake for the pole. Eventually all was set up, but it certainly wasn’t my finest antenna installation. Conditions on 20m were even worse, if anything, from here. A lot of fruitless calling, and it was getting very cold in the strengthening wind. Eventually luck came to me in the guise of Manuel, EA2DT, who kindly spotted me and I was soon able to confirm the activation. With the points in the bag I packed up again, this time with the trickiest part of the walk to complete. Returning to the trig point, I was very surprised to find a gentleman sitting at its base. Turned out he was a former EI2, whose license had long since lapsed - retired ex. Post Office, but it must have been some time ago because he had never heard of SOTA! We chatted for some minutes before he set off on his way, again in the other direction. 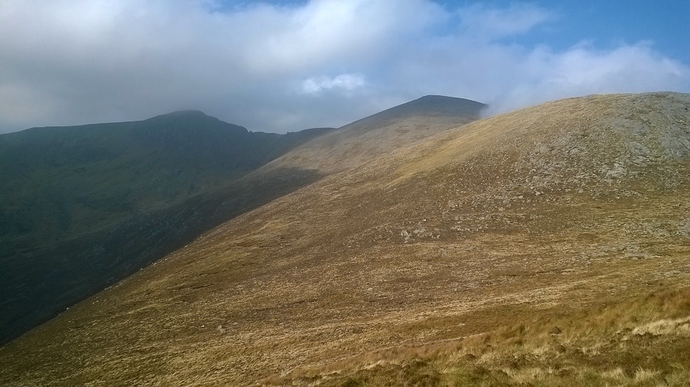 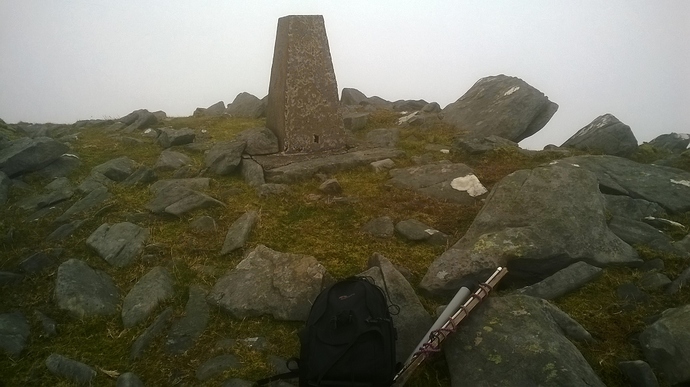 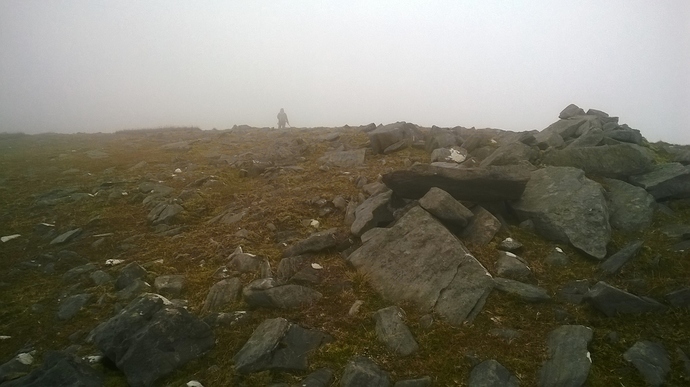 EI2 disappears into the mist

I set off on the tricky descent down the spectacular ridge between Corranabinnia and Corranabinnia SW Top. The cliffs on the NW side of the ridge require careful navigation and today, visibility was pretty poor. Rather than attempting the scramble up to SW Top from the col, I chose to go around the main part of the summit on the less steep east flank. After a little scrambling, I was back on the main ridge leading me downward, out of the clouds with the main climbing of the day complete. A long gentle slope off the horseshoe with magnificent views over Clew Bay, followed by a couple of kms along a forest track to the car. I was up and down in about 7½ hours and a great day’s hiking indeed. 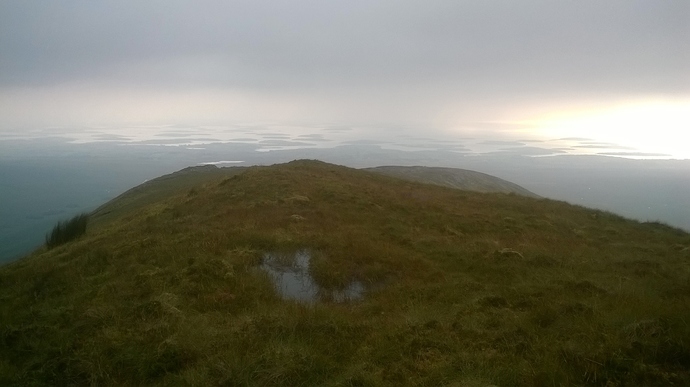 View over Clew Bay on the descent from Corrannabinnia

I completed this activation the same time as Ireland’s exit from the Rugby World Cup to Argentina. I had a bad feeling that nothing good was going to come of this match so instead I took advantage of the good weather, the quiet roads and the even quieter hills of this Sunday morning. I parked at a lay-by at a famine memorial by Doo Lough at the western base of the mountain. As I pre-hydrated with a litre of water, I surveyed the great slab of mountain to be tackled almost immediately after stepping from the car. The steep grassy slope is unrelenting for nearly 600m but at least with the dry weather, the grip was particularly good. When Barrclashcame West Top is reached, the gradient eases and before leading you across a broad ridge to Barrclashcame itself. There is a spectacular rock scramble leading up from the ridge to the plateau on Barrclashcame with Doo Lough behind you in the valley below. It is only about 50m high, but it is memorable nonetheless. Care is needed to note the precise location of the rock scramble for the return, as it is the only easy route back off the plateau. The plateau is enormous, flat and increasingly grassy towards the summit end. The summit is marked with a pile of stones and a rusty metal fence pole. There was not a soul for miles, so I set the antenna up right at the summit. Almost dead calm conditions, this would be a bleak spot without any shelter on a lesser day. 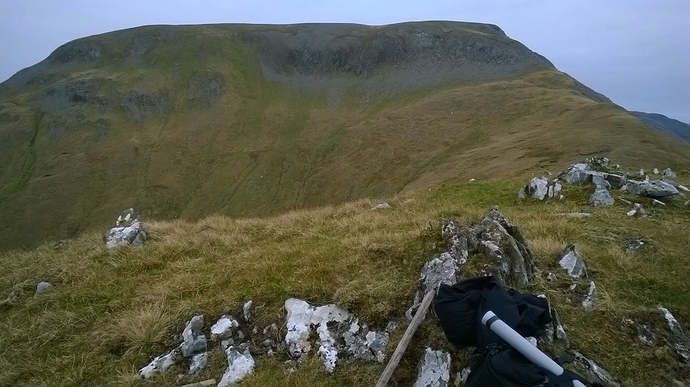 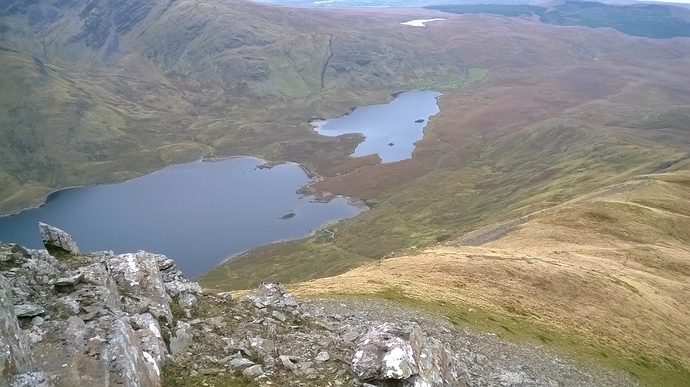 Scramble up to Barrclashcame Plateau with Doo Lough below 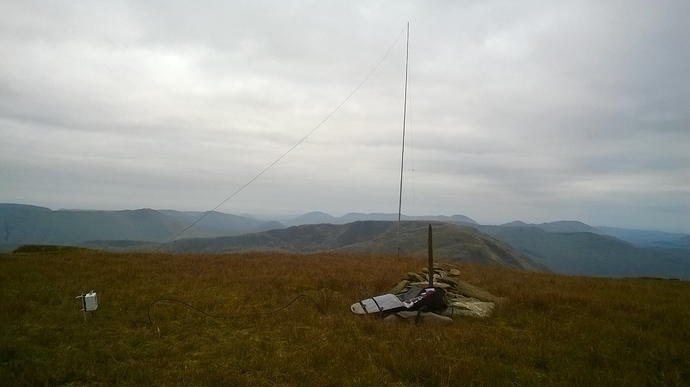 On the air, this was JOTA weekend and no-one seemed interested in SOTA activators (or even their right to occupy a frequency!). There seemed to be another contest going on as well, but I couldn’t get a handle on what the required exchange was. Working through the qrm on 20m phone I managed to log 5 qso’s on my own calling frequency, all German stations. After that it was time to pack up, have lunch and head back down the same way. Round trip was about 4 ½ hours. I got back to the car just in time to hear of Ireland’s collapse in the Rugby– I was glad I heard this in the car in the afterglow of a mountain walk rather than sitting at home watching it on TV. Made the effort all the more worthwhile.
I don’t expect the lead up to Christmas will bring anything like the same opportunity for activations. The shorter days and the unpredictability of the Irish weather probably means that only the lower slopes are likely to be easy options. Good bye from me and I hope to contact you from an EI/IW in the future. 73 John EI3KA

Some fantastic photos John. Reminds me of when I lived in Scotland.
73 Glyn