With the advent of the YB and DU associations, along with VK and ZL slowly leaving lockdowns, and in discussion with the various groups, we have decided to put together an activity weekend to encourage activity in these associations and others in the Australasian region.

The dates chosen are December 4th and December 5th, 2021.

Hopefully we will get a large range of activations and chases from these regions, and we encourage the other Pacific associations (JA, HL, BV and 9V) to participate as well!

I’m still planning which summit I will be on, but I intend to activate something on December 5, and will post an alert in the coming days. I hope to make many contacts as the sun comes out of the doldrums and activity can recommence in many areas.

Looking forward to this weekend.

I’m not sure at this point whether I’ll be able to do an activation or two, but I’m hoping!

At what time do you plan to do the activity? I was playing with the VOACAP and noticed that the best conditions between OC and AS are after 00:00 UTC.
Of course before 00:00 UTC there are chances but it would be too early for Indonesian activators.
73!

It’s a whole weekend, so people will activate as possible. It’s going to be hard to coordinate across all the timezones, so it’s unlikely to be the S2S bonanza that say UTC New Year is, but should stimulate activity in all the associations

I am aiming to be in Melbourne around the date of this activity. I plan to activate Mt Strickland VK3/VN-030, a new peak for me

Well, my activations didn’t go nearly as planned, but it was great to see so many activators out on the weekend - by my count, 97 different summit/activator pairs were activated across VK, ZL, JA and YBJ.

I managed to get a leave pass to head out early to grab a bunch of summits up around Hotham, so I packed my gear up, loaded up the car, and headed out. I made good time to Mt Hotham, and although the Loch car park is closed, I parked a bit closer to the summit and walked the 4km or so out to Mt Loch. As I neared the summit, I started to have a nagging feeling something was missing, and when I got to the top, I realised what that something was: my LiFePO4 battery for the HF radio. That left me with a handheld and miles from anywhere, and all my weekend plans basically in tatters.

Being there, I put out a call on 2m to see if by some stroke of luck anyone was listening.

By a big stroke of luck, the ham family of Andrew @VK3BQ were descending from the top of Mt Feathertop VK3/VE-002 and were able to give me three callsigns - firstly Nathan VK3DNS, his mum Christine VK3EEK and dad Andrew as well. Now for Toby to get his callsign and I would have qualified that summit there and then

Not to worry though, I heard Geoff @VK3SQ come back for contact number 4. Peter VK3PF was loud with his 50W, but my 5W wasn’t able to make it back to him, but 4 was enough to make the 5 hour drive worthwhile.

I stayed at Hotham overnight and in the morning climbed the main summit from the same car park, this time armed with a 6 element DK7ZB yagi, with the aim of trying to work Andrew @VK1AD . The view on day 2 was a little different, and I tried first the RH-770, then the Slim Jim and couldn’t work Andrew, although he was audible (just) on my end. 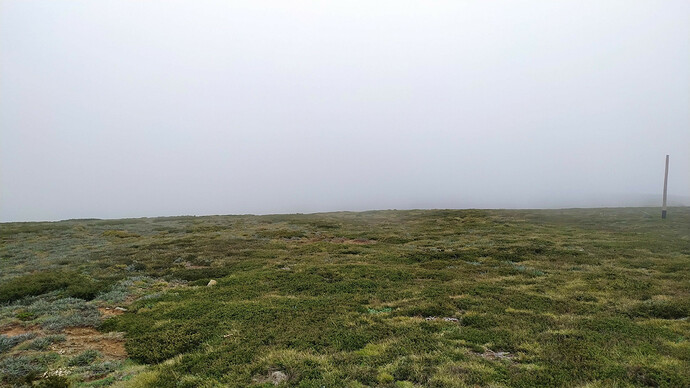 I took the time to set up the 6 element, and while that was going on, heard Andrew VK3BQ call in, so worked the family again for 3 contacts, and then went back to assembling the yagi. I will tell you it’s a damn sight easier to set up a yagi in the backyard than on a summit in the cold so it took me a while, but eventually got it functioning and put a call out.

A brief clearing in the cloud made me realise I had disoriented myself while talking with Andrew and family and was facing a different direction to where I thought, so once I fixed that, I pointed roughly Melbourne wise and worked Rik VK3EQ for number 4, and VK3ZAT off the back of the beam for number 5.

A few more attempts with Andrew were fruitless, which may have been due to niggles in the yagi, but I’ve got better plans for assembly now it’s been field tested and next time should be easier. 5 contacts, 20 points for the weekend, all on a handheld 200km from any major population centres, makes me a very lucky if poorly prepared activator.

Battery was sitting on the 3D printer when I got home, hidden by the printer head, so I guess that’s something of a defence (I do use checklists, but took the battery back out to test the yagi on the Friday).

Hi Andrew. Days 4 and 5 were really very cold here in Japan and also unfortunately the DX conditions were very bad. Only one chaser from Australia called me and his signals were very weak.
Now that I remember it, the ¨Transpacific S2S¨ event was held in April and I remember that the activators from Oceania had excellent conditions with North America. From Japan we had no luck with NA but we did with Australia, New Zealand and Indonesia. It was a successfull event.

Great to see the report Andrew. Unfortunately I didn’t get to do any chasing, let alone an activation!

Great photos too, thanks

I chased one YB activator and one JA activator. Conditions were not inspiring, far different from the previous weekend.

Should be better conditions next time.