Well, here we are at the end of July already. Temperatures in Northern Nevada are hovering in the 38 C [100 F] range which is quite normal. W7RN now has two remotes, one with a KPA1500, so I intend to get back into the chasing game after a long absence. On to the news from the New World …

STATISTICS: The statistics for July look a lot more like they should. I removed June’s data since the numbers were very small and obviously wrong. I am suspicious of the 3 VLF QSO’s, and 12 1240 MHz also seem like a lot, but that’s what came down from the Internet and you know it’s illegal to put anything on the Internet that isn’t true. If whoever posted VLF QSO’s would enlighten me, it will likely be of interest to others. [

AWARDS AND ACHIEVEMENTS: We have several to report this month:

Steve, WG0AT, advised that, if Mt. Evans was climbable on 10 Jul, George, KX0R also will make 4 time Mountain Goat at 4001 points. Word that he succeeded has yet to reach Sparks here on the western frontier, but even if he didn’t, he’s awfully close.

From Brad, WA6MM, comes news that Ryan, K7ODX, just became the first W7U Mountain Goat activating 134 peaks, all but 2 of which were in Utah.

And in New Mexico news, Fred, KT5X, reports that Paula, K9IR, is the 6th chaser to make 100 QSO’s with activators on W5N SOTA peaks since 1 Feb 2018 and earns a NM Century Medallion. Martha, W0ERI, and Gary, W0MNA, have each achieved 200 chaser QSO’s with NM SOTA activations and have earned Double Century Medallions. Fred mentioned that he has medallions for 100, 200, 500, and 1000 QSO’s and that he has plenty of the medallions.

Claiming one of those 500 QSO medallions is Phil, NS7P. Fred commented, “Over the last two months Phil has become ‘Mr. Johnny-on-the-spot’ for every NM activation. He is usually the first to snag me on each band, and gets through even when the conditions are punk.”

Congratulations to all!! I think this is the largest Awards and Achievements we’ve ever had.

EYEBALL SOTA: July saw several in-person gatherings or annoucements of plans for them:

Jeff, AA6XA, reported: “For the second Bay Area Meetup, we met at Mr. Pickles in San Rafael (not a breakfast place but good sandwiches). Despite some parking difficulties due to a bike race, six of us were able to attend. We had a slightly different group this time: Rex, KE6MT; Jeff, AA6XA; Dmitry, N6DNM; Austin, K6ABM; Elliot, K6EL; and Joe, AA0BV. We enjoyed our sandwiches on the plaza and discussed all things radio. Afterward, a few of us were able to go up some nearby mountains.”

“K6ABM hiked up San Pedro Mountain, KE6MT went up Vollmer Peak, and AA6AA hiked up Pine Mountain. Eventually we all managed S2S contacts on 2 meters. K6ABM and AA6XA had more time and both worked chasers on HF.”

Everyone had fun, and it was a beautiful afternoon for activating afterward. Keep an eye on the NA SOTA list for the announcement of the next meet-up. Hope you’ll be able to join us!"

Fred, KT5X [aka WS0TA], provided the following: “The Duke City Hamfest will also serve as the Rocky Mountain Division meeting this year. It will be held Sept 21-23 at the Isleta Pueblo Casino, south of Albuquerque, NM.” 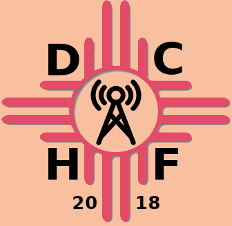 The three-day Duke City Hamfest, Sept. 21-23, 2018, is hosting the ARRL Rocky Mountain Division Convention this year, sure to be the region's premier ham-radio event.

“There will be a SOTA presentation at the convention which will feature activators representing possibly 25% of all activations yet done in North America. Activators and Chasers from all over the country are invited to be part of this group of enthusiasts! When the date gets close and we know who is coming we will certainly organize some appropriate gatherings, on top of peaks, or at esoteric watering holes such as the Mine Shaft Bar and Grill.”

The Mine Shaft Tavern in Madrid New Mexico!

“Think of this as your invitation to have some more fun meeting some of your compadres and doing some NM SOTA peaks. You might activate Sandia Peak, nearly 11,000 feet high, by riding this tram up the face of the mountain!” http://sandiapeak.com/ “Looking forward to meeting you.”

Joe, N0MAP" sent the invitation for the Midwest gathering: “We decided to meet at Ft. Wilkins SP on MI’s Upper Peninsula Sept 8-9. There are still a bunch of sites available (surprisingly). There are a range of summits relatively nearby, from drive-ups to longer hikes. There are places to eat/meet within walking distance (including a brewery!). My plan is to arrive around noon on the 7th and maybe get an activation in. I’m booked in site 161.”

Finally, Jamie, N6JFD, has set up a breakfast meet for the Tahoe-Reno-Sparks area:
"So, lets shoot for August 11th, Saturday at Big Ed’s Alley Inn in Downtown Reno: 9am - whenever. https://www.yelp.com/biz/big-eds-alley-inn-reno

“It’s a neat looking place, I called and they can handle a group up to 10 folks. (And it’s not in a strip mall). Please let me know the level of interest and I’ll get us reserved for that morning. Looking forward to meeting some of our local SOTA folks.”

No reports this month but Jody, K3JZD, reported that his phone, when close to his KX3, put all kinds of noise into the radio. It appears that he has a GSM phone and several knowledgeable folk mentioned that it’s called “GSM buzz.” Do not adjust your set!