How do you turn a 16 mile stretch of the Appalachian Trail into a two night trip? Add in two SOTA activators, four SOTA summits and roughly 9 hours of on the air time! Scott @KW4JM and myself started (re)activating the summits along the Appalachian Trail last December starting at the southern terminus of the AT on Springer Mountain – W4G/HC-005, with the added fun of these taking place on at least an overnight backpacking trip if not a multiple day excursion. On our most recent trip, we covered the section of the AT from Unicoi Gap to Dicks Creek Gap which would include Rocky Mountain – W4G/NG-011, Tray Mountain – W4G/NG-005, Round Top – W4G/NG-013 and Double Spring Knob – W4G/NG-007. Weather was expected to be unseasonably warm with highs in the 50s and lows in the upper 40s at elevation.

The hike to Rocky Mountain – W4G/NG-011 from Unicoi Gap is less than 1.5 miles but has a great campsite on the summit, so we planned a late afternoon start for our trip. I left work early on Thursday and met Scott at Dicks Creek Gap, where we left his car for the return shuttle and made the quick drive to Unicoi Gap. The campsite on Rocky is dry so the pack was a bit heavier than normal carrying a full 4 liters of water. The climb was short, but with 1100’ of elevation gain we were quite warm by the time we reached the summit.

Scott and I usually set up one radio on our joint activations, each taking turns working different bands. Our setup for our activations on this trip was either of our KX2s and an EFHW. We typically use Scott’s EFHW has a link with extension for 60/30 meters but did use my LNR Trail Friendly EFHW for expediency on Double Spring Knob. Once we had the station set up, we alternated between making contacts, setting up camp and collecting firewood. 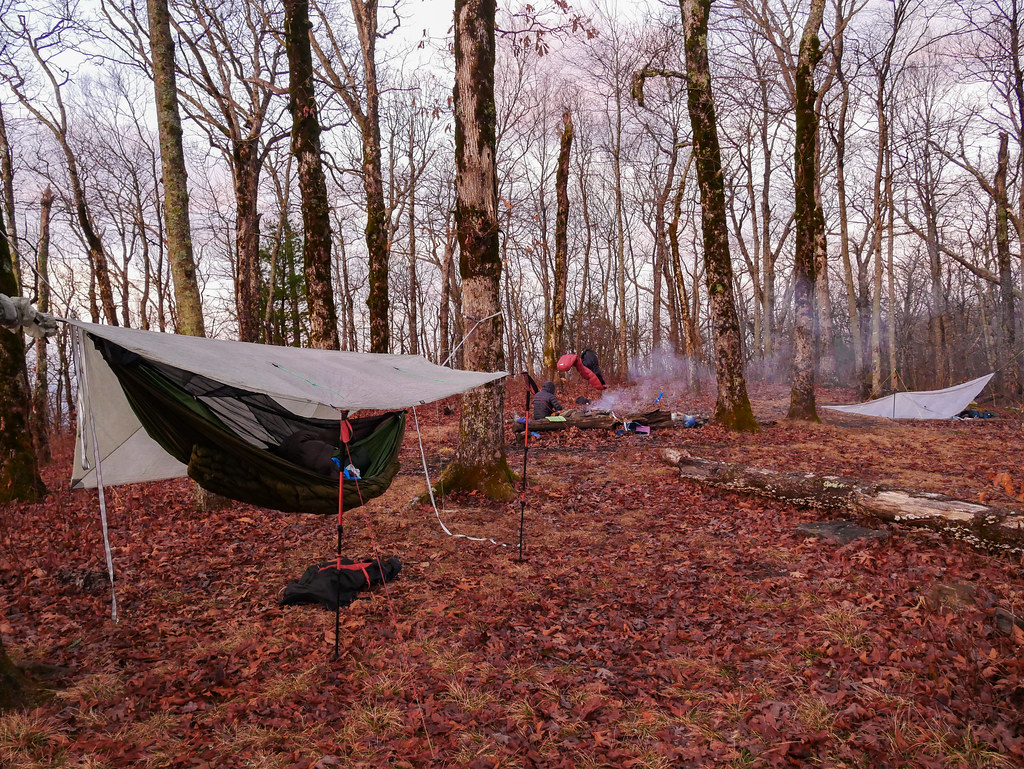 Camp on W4G/NG-011 - Rocky Mountain by Patrick Harris, on Flickr

We had a good run before the Zulu day change and continued on for a while afterwards giving out a few more points to the loyal chasers. Highlight of the evening (and the trip) for me was working Hideo @JH1MXV for my first chase by a Japanese station. 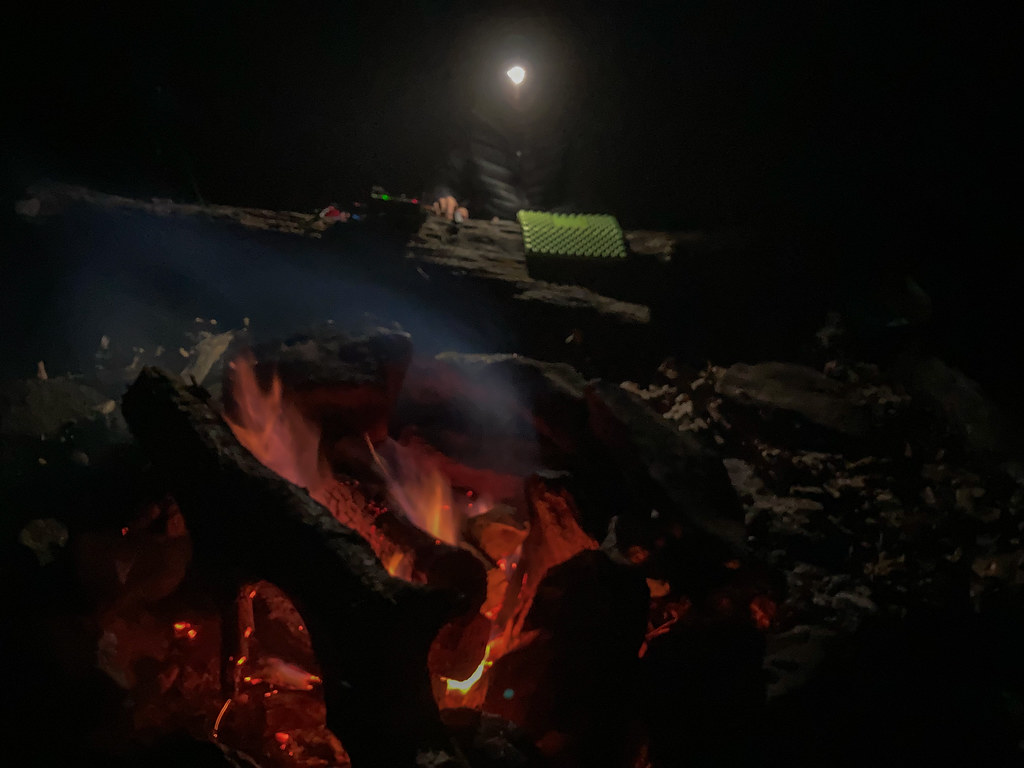 Campfire and QSOs on W4G/NG-011 - Rocky Mountain by Patrick Harris, on Flickr

After the QSOs dried up, we enjoyed the pleasant evening and caveman TV for a while before hitting the sack. 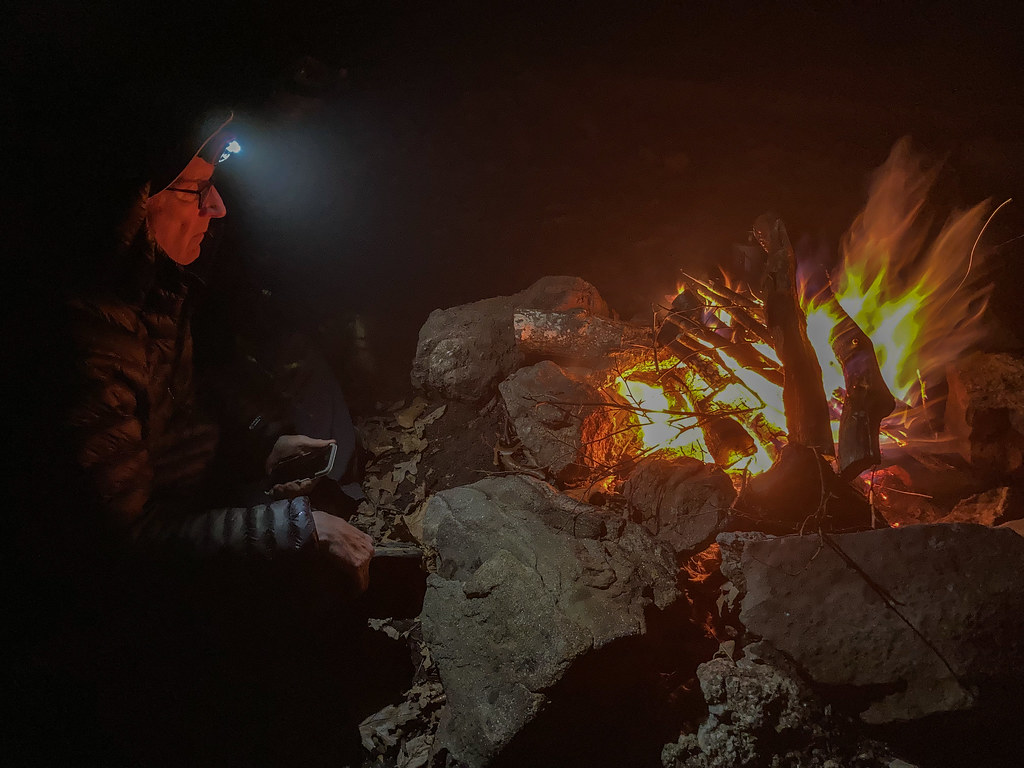 Scott-KW4JM tuned into the caveman TV channel by Patrick Harris, on Flickr

The next morning we repeated the process in reverse, making contacts while enjoying breakfast, coffee, the sunrise and breaking down camp. 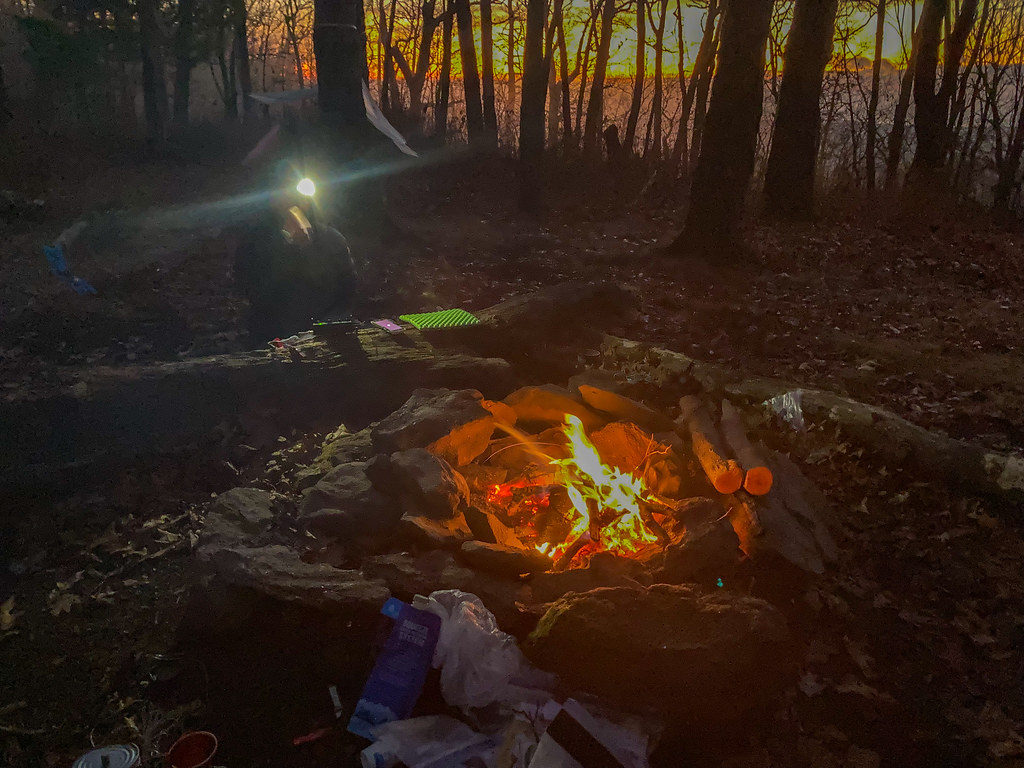 From the summit of Rocky Mountain, we had a short and steep descent to Indian Grave Gap where we met Ryan @W4GI, who had just activated Tray Mountain – W4G/NG-005. Ryan had planned his day’s activations somewhat around our schedule which allowed local S2Ss on all three of our respective activations. After chatting for a bit, we set off in separate directions. Ryan heading up Rocky and Scott and I starting the 2.5 mile climb to Tray Mountain. 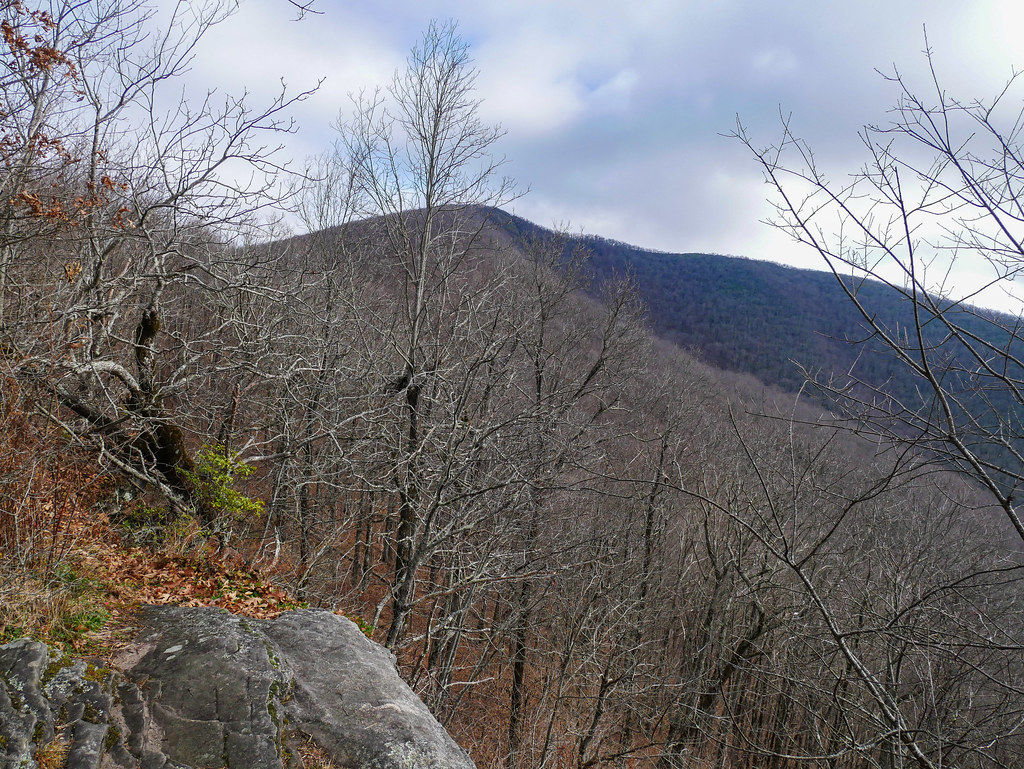 View of W4G/NG-005 - Tray Mountain by Patrick Harris, on Flickr

We set up further down the ridgeline rather than on the summit itself. The summit is a narrow and rocky spot on the trail which is a popular destination and I wanted to see if the other end of ridge was a viable location. There was a small campsite there which worked out much better than the summit itself but was still in the AZ. The clouds had moved in and the winds had picked up, so things quickly started getting damp and chilly. There was a trail heading down the southern ridgeline and while Scott was on the radio I went exploring. There were a couple great campsites and another overlook, but with the clouds there wasn’t any view.

We made our way north on the AT for another 4.5 miles, where the trail crests the ridgeline for Round Top - W4G/NG-013. We dropped our packs just off the trail and made the short off-trail climb to the summit. Being on a lower summit and below the cloud layer was much nicer than the conditions earlier in the day. Our 2m S2S with Ryan on Blue Mountain – W4G/NG-010 gave him a complete for Round Top and we all love our completes! 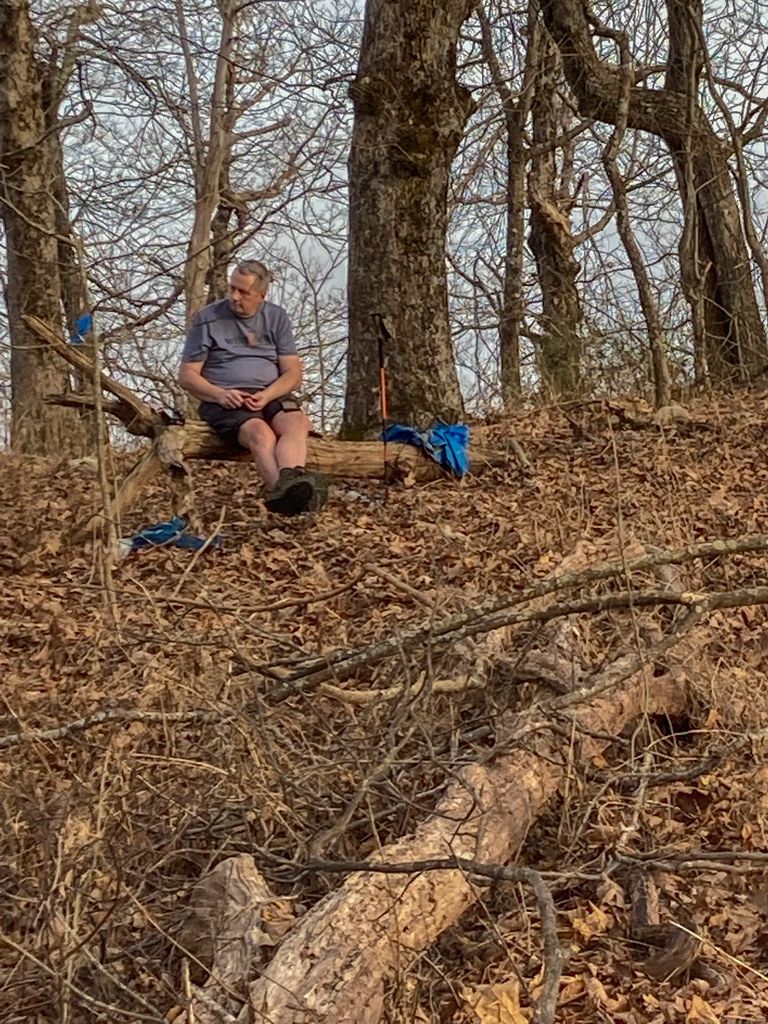 Back down to our packs, it was a short half mile hike down the trail to Sassafras Gap where we would spend the night. I guess we were both tired because there were no photos taken, but we enjoyed another pleasant evening around the campfire before heading to bed. We knew that the rain would be moving in early in the morning, so we made sure that we had everything buttoned up and ready for a wet morning.

We enjoyed our breakfast and coffee accompanied by the pitter patter of the rain drops on our tarps. I noticed that it looked like we would have a short break in the rain, so we took advantage of that and quickly packed up and got back on the trail. The reprieve from the rain lasted just long enough for us to make the two-mile journey to the summit of Double Spring Knob – W4G/NG-007. Just as we found a good spot to setup, the skies opened up and I quickly strung up my tarp which I had poised for action on the outside of my pack. We had to wait about 10 minutes for the rain to let up enough to get an antenna up, but we were out of the rain so it was all good. 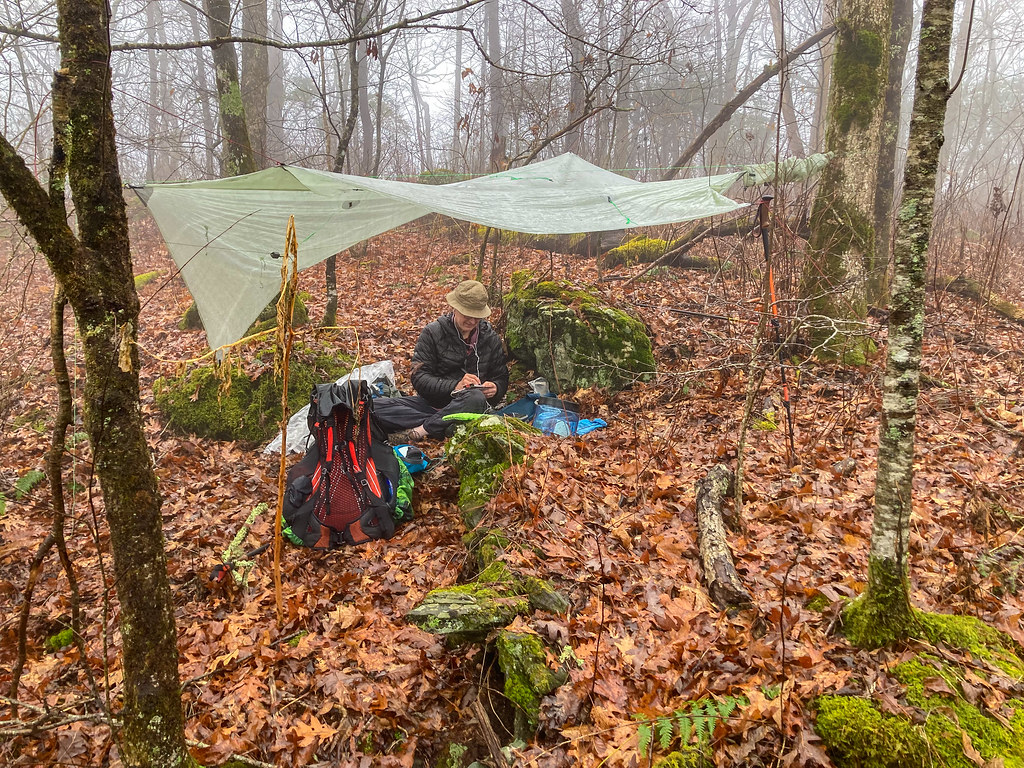 I started on 60 meters to get the locals, then Scott took his turn on 30 meters (pretty sure that is his favorite band). When I offered to do 20 meters next, his response was “Good!” The pile-ups on 20 can be a bit chaotic but I tend to enjoy them – even with my poor CW skills! When the pile-up dwindled 35 minutes later with 35 contacts in the log on 20, I was happy to hand the rig back off to Scott. After Scott worked a couple more bands, I saw on the radar that we had another break in the rain, so once again we quickly packed up and avoided the heavy rain while we made our way back down to the trail. 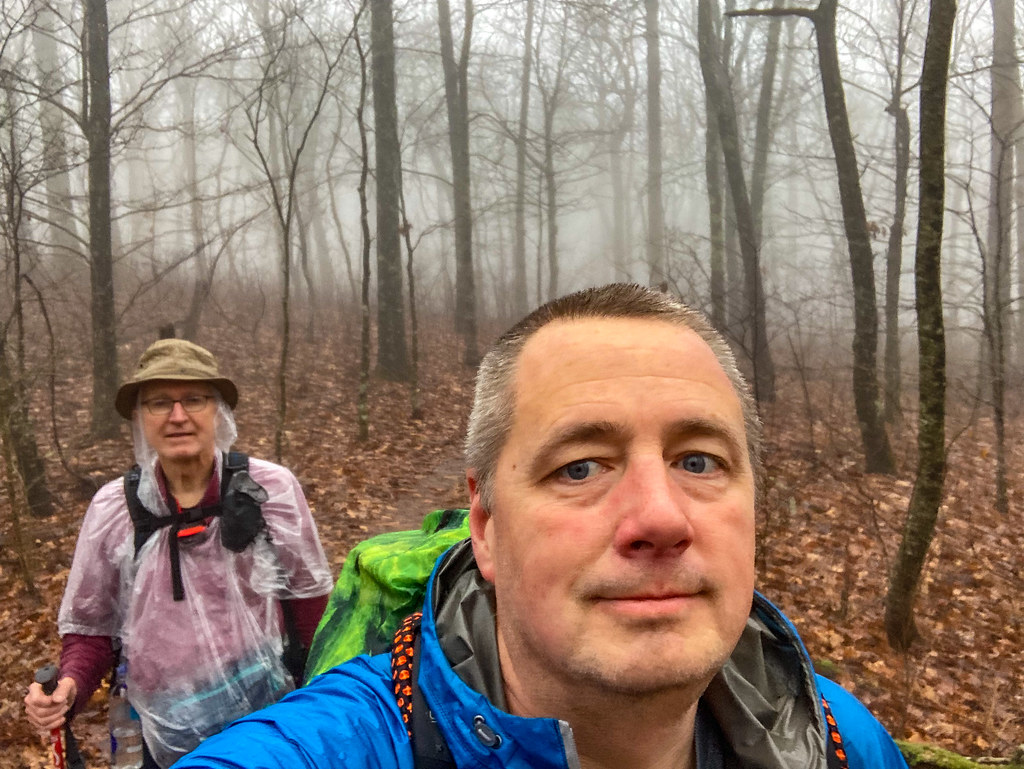 Two soggy hikers on the AT by Patrick Harris, on Flickr

We only had another 4+ miles back to Scott’s car so we pushed on through the rain without a break. Of course the sun decided to poke it’s head out from the clouds as we made our final descent to the highway. Another great trip and we have just one more trip int he works to finish off the AT summits in W4G.

Great story and thanks for the wonderful pics! I am envious!

Wow, what a great adventure! Thanks for sharing, guys.