APRS for SOTA (up to date suggestions?)

I posted a couple of questions regarding APRS, daily as a tool to self SPOT without mobile phone coverage and I start reading some older post.

I wanted to get some more up to date help and also other the info in one post for inexperienced in APRS like me.

There are a couple of routes that someone might take. At the moment I take with me a KX3 but I also have a cheap 2/70cm that I could use without spending a fortune!
I also have an android device that I could probably use for generating the audio.

Whats the best route to follow? 2m/70 or HF, stating with the idea that I don’t want to spend a lot (i.e. get one of the fancy 2m radios)
What could be an up to date portable setup? To me it seems that HF gateways might pick me up easier. Is 2M coverage good? (admittedly I don’t use 2m a lot as I always need to load software in order to edit the repeaters)

Hello
You also can use this link: http://gyalogradio.ham.hu/
I often use it and it works very well
73 de Roger
F5LKW

You use it with a 2m portable or hf?

Tasos, there are 2 APRS gateways running that will take spots from the APRS network and put them on SOTAwatch. 1 is run by Stewart G0LGS and the other is the Hungarian gateway in the link Roger gave.

You have 2 issues when spotting by APRS, formatting the APRS message so that either gateway will accept it and forward it. ( You need to register with G0LGS first. ) That’s an admin issue, getting the format correct and being a valid APRS gateway user. Once you have solved that the remaining problem is getting from your activation location to the APRS network.

What many people are using is a 2m HT and the APRS network that exists. I don’t use APRS so can’t comment on how extensive or not the 2m coverage is in your part of the world. However, plenty of spots are pass by APRS so it’s reasonable to assume there is good coverage in many parts of the world. There are some nice 2m HT with fully intergrated APRS but they are not cheap new or second hand and you may not wish to spend that kind of money at first. The alternative is to have something else generate the APRS data. APRSdroid is an Android app that can be used to send APRS data either via the internet using the phone’s connection. (If you have a working phone internet connection then just spot using SOTAwatch!) or you can use the app to generate normal packet radio audio data which you can feed from the phone into your 2m HT. You can then type in the spot message to the app and get it to generate the audio for the HT.

If you have an Android phone, you can get APRSdroid for free and play with it. Before you buy a 2m HT, see if you can borrow one locally to experiment first. Be careful buying the many Chinese radios on sale. Some are excellent units, well built that function really well and a lot of them are complete junk with no ability to work in the presence of other signals.

Thanks for the info. I did a bit of googling and i think the cheapest testing enviroment will be the App plus a cable to the cheap beofeng (or whatever it’s spelled) 2m/ht…
You never know, it might work!

I tried the app plus cable and cheap baofeng this last Friday without success. User error was probably to blame. I think my main lesson learned was that there are a few setup steps I missed (including setting the radio to vox, and the aforementioned formatting of the message!) Also I had never sent a test message with correct formatting etc. Given how chilly it often is at the top I think I’m going to fill a notepad on the phone with Spots that I can just cut and paste into the APRS app. I know I forgot to use the "-"
Good Luck!

I have some notes on my blog about my set-up from my phone to a UV-B5: 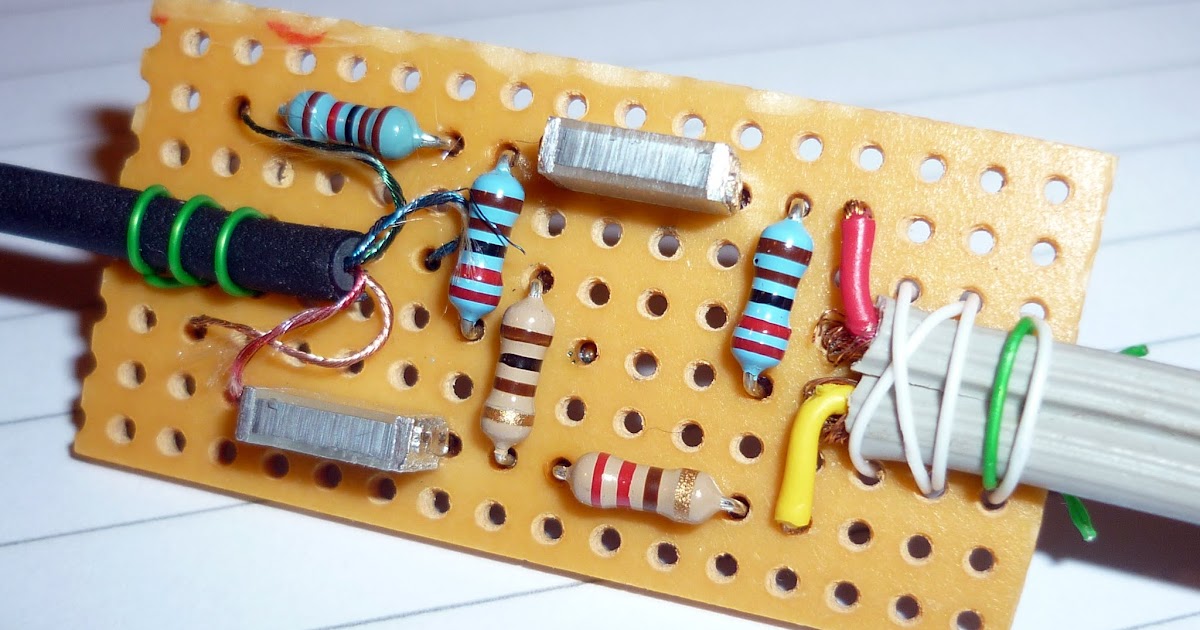 Moto E to UV-B5 I have started trying out APRS as an additional means of tracking my position whilst out in the mountains (although covera...

I’ve had it tracking and sending spots. But coverage is an issue.

If you look at aprs.fi you should get an idea of what’s around.

I see things moving around my area but I think some/most are via TCP not over the air.

I have a UVB5 with a better antenna (771 or something) but I couldn’t hear something.
Maybe I did something silly wrong as it was very early morning

I use my Kenwood TH-D72 (Price I agree) and it works great. I have only spotted once via APRS2SOTA but I have also used it to see my track afterwards and to be tracked during an activation. There is excellent coverage here in Northern California for APRS. I have been on some remote summits with no cell coverage, like Black Lassic or North Yolla Bolly, but the APRS traffic is almost constant! I also generate other short APRS messages to family or other hams via their email or text message. Besides that it is a good dual band 2m/440 HT and many times I can get to my home repeaters from a fairly remote summit.
The price on the TH-D72 has dropped a little since the D74 came out.

I have used a UV3R both hard wired (similar to Simon’s post above) and with the Mobilinkd TNC to connect over wireless to an old Android phone running APRSDroid
Whilst it works, I have found 2 major issues.

Whilst a better TRX may help, I consigned the entire set up to the bits box to gather dust.
Putting an alert on Sotawatch and relying on RBNhole is 1000 times more reliable

I’m still tempted with a DeLorme inReach for both spotting in remote areas and as a general safety device, but funds are allocated elsewhere… 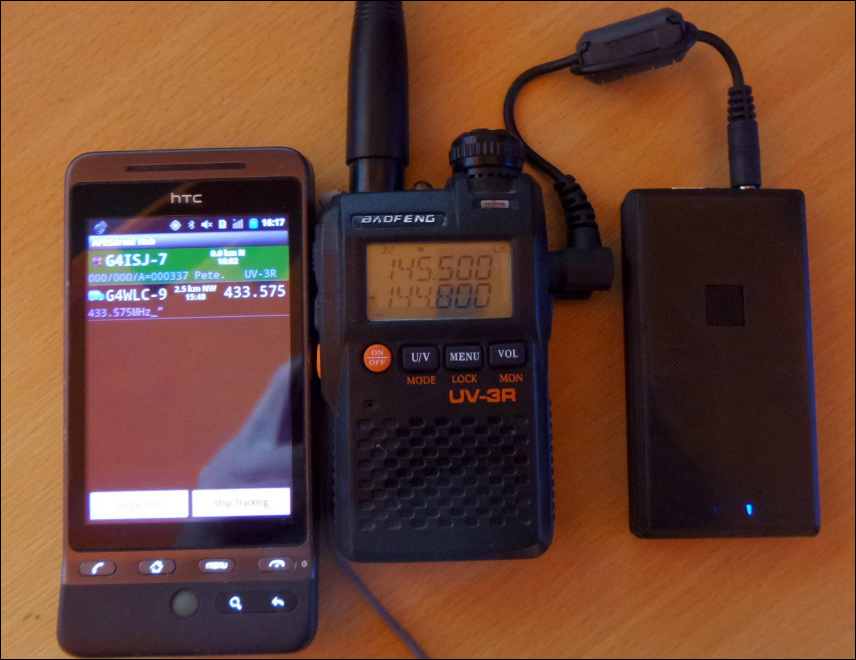 wow, it must be bad then

That Baofeng is a big part of the problem which is solved by using a better radio. The other is whether there are any APRS gates in range. To have an APRS network you need people to provide the nodes and gateway services and at that point we meet our friends everybody, somebody, anybody and nobody.

Want APRS using 2m… put some nodes on but do in cooperation with the existing nodes to fill in the holes.

Want APRS using 2m… put some nodes on but do in cooperation with the existing nodes to fill in the holes.

That’s what I did!!! The South of Shropshire is lacking good coverage so I made my own. 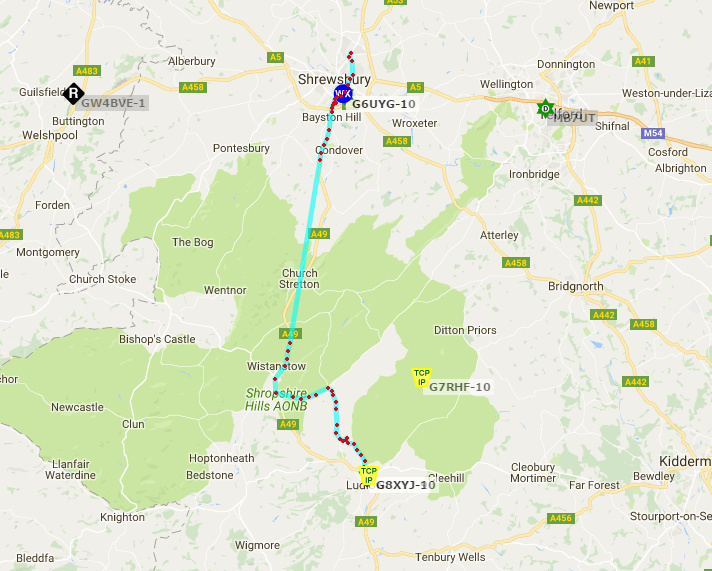 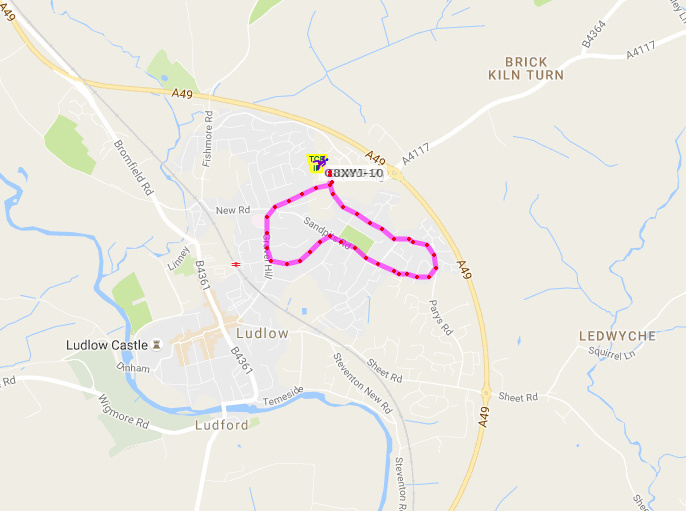 I now run 5 watts from a Yaesu FT1D when Mobile or Pedestrian and the system at home seems to be working well.

The Mobile is nothing more than a 1/4 wave on the roof of the car, whilst the Pedestrian system is either a Helical Whip on the handheld or a simple 2m Dipole, wedged onto a rucksack. 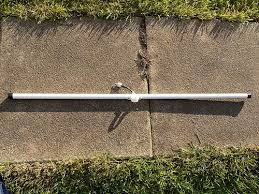 I made the dipole when I first started SOTA, copying M0JDK’s approach of simply stripping the black coating off of a run of coax to 19 inches long and separating the braid from the inner and then sticking the whole thing in 40 inches of 20mm conduit (Apologies for the mix of both imperial and metric!)

The iGate itself is fairly simple.

I initially did this

I used a spare netbook, colinear and Yaesu VR-500 Scanner. This system convinced me that it was worth investing in an APRS system.

So, to save power looked at ditching the netbook and going down a Raspberry Pi route, however it would’ve worked out more expensive. So in the end I went for this

After some setting up, I had a fully fledged iGate and Digipeater that works off a 12v 3a power supply I made for my Intermediate project.

The rig is a Wouxun KGUVD1P, plugged into an X30 colinear (Duplexer at the bottom - meaning I can still use the antenna for 70cm DMR for the local repeater).

When I use 2m FM or SSB from home, I turn off the digipeat function, so the system becomes a Receive only iGate.

I believe that advanced licencees are allowed to run an unattended node on 2m, however I may seek out an official NOV if the system continues to have more 3rd party traffic through it. If you’re an intermediate or foundation station, then you may have to have attended operation. I am sure a check online will alleviate any concerns you have.

The best thing about the Microsat System is the easy interfacing! Once the system is initially set up via USB, you can simply type the IP address you assign it, into a spare tab on your internet browser and configure from there, equally you can see the raw packets it receives via a PUTTY session on a Telnet tab.

One downside is that it needs a wired connection from your router. My shack is upstairs and my router is downstairs, so I ran some CAT5 in the end and terminated the ends with RJ45. I did look at possible ways of getting around this with wifi adaptors, but in the end the wired system is hard to beat.

As with WSPR, it is quite interesting to see what your station can hear on a month by month basis.

Here is the month of November 2016, picked up by my iGate 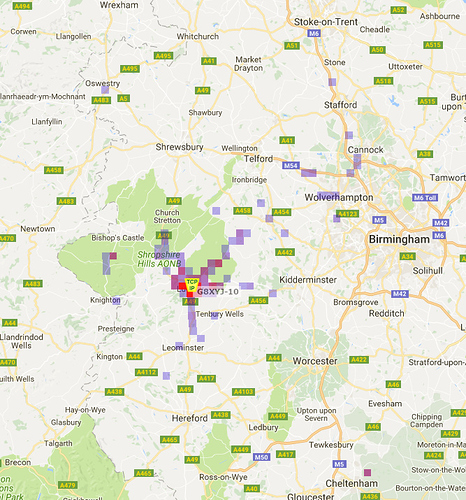 I do not need to teach Andy how to code, but I hope this may be of help to anyone else that is looking into a low power (Both RF and Consumption wise) system, that once set up, does not require a PC.

Ill try to make a wire and test.

I took my uv5b with me while driviing towards Paddington station and i picked up a couple of messages. My place in a black hole probably.

Im thinking of getting a 770 antenna 2/70 so i can test things with the 587d too, and maybe the car. What do you think about the antenna?

@G4TJC and @G4ISJ which of the images of schematics floating on google should I follow for the cable?
I got the kenwood connector from a 2pound headset from eBay.

edit: here is the cable, better than I expected 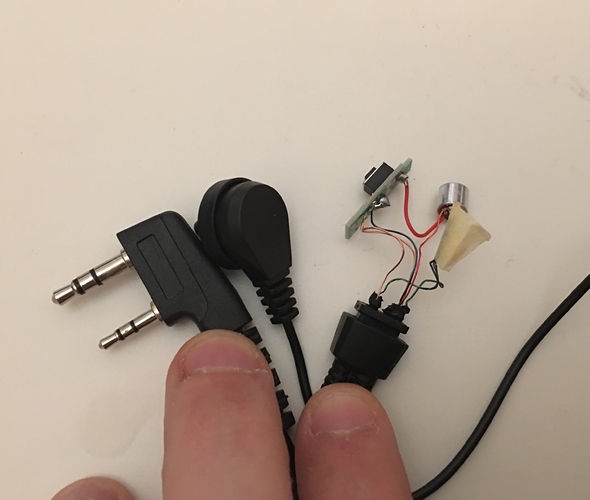 probably this one. some use a 10nF cap too