Hi just wondering if anyone if using a Anytone 878II pro for SOTA activations? There is a club member who has offered me one which is pretty much like new for £160. I currently have a FT 817 and FT270 that I’m using for activations. I was thinking that the 878II could be used as a back up, something to have on the walk in to the summit. It has GPS and APRS I’ve not used this on a radio before, but thinking that it could be useful? The IP rating is IP58, but I’ve read that the band width is narrower than likes of the FT4d?

It’s a DMR dual band and you can find here some tips :

Thanks Eric, I’ll head over there and have a read

Hello Rich,
I love AnyTone 878 (i have two of them)! I use it everytime i go out in mountains.
Not realy for Sota QSO, (except for local VHF contact), but for DMR network to keep in touch with chasers (in live)! Aprs and Dprs works fine (you can see F6HBI-7 on my last activation.
I can give you tips…
73 from Gerald F6HBI

Thanks Gerald, I’d be interested to see how many people are using APRS over in the UK, but I can see the advantage of it for safety and the chasers!

I have one, I have used it as a plain FM HT on 2m and also as a DMR HT via a DMR repeater and also via my own hotspot.

I have to say I am not particularly keen on making “contacts” where the main pathway is the internet, it works as phones do. Using DMR through either my hotspot/repeater or via a club repeater it’s like an IP phone that uses amateur band RF at one or both ends, possibly a repeater on a hilltop at the other end. This gives me no technical pleasure at all, it is merely functional and provides a way of talking with someone. There is possibly an emergency application, especially if you wade through the soup and configure it as an APRS beacon and messaging device. But in many of the places I go for sota there is no APRs coverage, no voice repeater coverage and some don’t have any cell phone coverage either. My satphone does a better job, but as its repeater/satellite is in the sky above Indonesia, you can’t reach that either if you are on the wrong side of the wrong hill.

The other thing is, the antenna connector on the Anytone 878 is the cursed Reverse SMA. What mastermind thought that was a good idea? I thought that was for wifi devices. Yet more adaptors needed to hook it up to any existing antenna. I said I would never have a radio using those connectors so I suppose I have to get rid of it?

I have to say I am not particularly keen on making “contacts” where the main pathway is the internet,

Hello Andrew,
With the local Club, we are working the project to use DMR with Amateur IP Hamnet…whitch is fine.
Gerald

Hi Rich
Not sure what other users of APRS are finding, but a walk up LD-044 today with an FT5D sending an APRS packet every 10 minutes failed to be spotted at all on the 4 hour walk and activation. Admitted, I am still finding my way with this radio and may have something in one of the menus not quite configured correctly. LD44 is a notorious black hole for VHF so that may also be part of the problem, or of course there is nothing listening…
Hopefully I can sort out the problem by next Wednesday - start of the winter bonus season.
Any comments from other APRS LD activators, chasers, or APRS guru’s?
73
Tim
G4YTD

The other thing is, the antenna connector on the Anytone 878 is the cursed Reverse SMA.

No, it does not have a reverse SMA connector. It is a SMA male connector. Still I agree, having male SMA connectors on radios is very uncommon. Normally you have SMA female on the radio and SMA male on the cable / rubber duck antenna.
So your arguments still count.

I’ve used APRS a few times on an FT3D, mainly for spotting via APRS2SOTA. For the FT3D (I assume the FT5D is the same) make sure you are on VFO B and you have squelch turned on. I’ve found that if there is some sort of incoming signal, ie the blue light is on, it won’t transmit a beacon.
Do you receive any packets? It should be blipping away when the modem is turned on.

I have just been having another go with it tonight, It is on VFO B, 1200 baud and tx on 144.800. I can hear the outgoing data transmission on both the FT5 and a separate rx. No incoming data from the speaker on the FT5 (or the base radio connected to a 2x5/8 colinear. I have just set the callsign to G4YTD-7. Sent a couple of test tx outside, but nothing showing on aprs.fi, it just says I am not in the location database. Maybe not in range of an rx station here. I will take it for a ride in the car tomorrow and see if it appears on fi.
(Sorry for hijacking the thread)

No it’s all good Tim, plenty of learning for me here. I’m out tomorrow to activate GW/NW-002 and hopefully I’ll show up on the APRS.fi
We’ll see

Rich
I also use Anytone on TG-973 like back office.
Also for DPRS , coverage In south France is Nice. 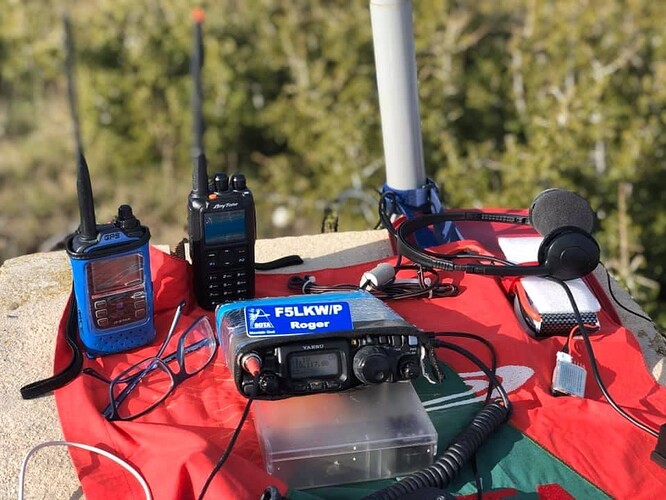 Hi Rich, I bought one of these as a backup radio for SOTA but ended up selling it again. For me there are a number of issues with the radio. It has a QSO voice recorder which is a very useful feature for SOTA logging as you don’t need to write anything at the summit, but the recorder only works on DMR so not a lot of use in practice. The APRS is badly crippled, there is no messaging facility so it’s of no use for spotting and there is no smart beaconing so the tracks are not much use either. Apart from that the radio seemed to work ok for general non SOTA usage but there are better HT options for SOTA.

. The APRS is badly crippled, there is no messaging facility so it’s of no use

May be the last version 878UVII Plus is better?

if you turn off the modem and just leave it on rx at 144.800 you should hear some packets coming in, even though they won’t be decoded. If you hear nothing, then it’s not looking good. You need to move.

Morning Colm
I have had a listen on .800 this morning on the home system and can hear the odd data packet.
Connected the FT5 to the roof mounted colinear and can now hear and decode APRS packets, and have stations populating in the station list.
Next sent a couple of beacons, and checked on APRS.fi and get the following:
“g4ytd was not found on the location database”
Am I correct in assuming aprs.fi populates the location database from the received data transmission, and there is no setup on backend systems or servers to use the APRS network?
I used this Youtube clip to setup the radio.
Thanks
Tim

Am I correct in assuming aprs.fi populates the location database from the received data transmission, and there is no setup on backend systems or servers to use the APRS network?

aprs.fi collects the data of the APRS-IS (APRS internet services) and stores it in a database for further visualisation. The APRS-IS is a world wide network for collecting and exchanging APRS packets over the internet. A number of APRS digipeaters not only retransmit packets on VHF but also sends them to the APRS-IS. There are also receive only stations called I-Gates forwarding the packets received to the APRS-IS.
Further reading: http://www.aprs-is.net/Specification.aspx and http://www.aprs2.net/
So to appear in aprs.fi some other station has to guide your packet to the APRS IS.
You can even set up your own I-Gate to improve coverage of APRS. If you hear your packets are digipeated then there is a good chance they make their way to the APRS IS.
One critical omission in the Youtube video: The DIGI PATH should be set to something like WIDE1-1,WIDE2-2 - if you set this wrong, no digipeater will send your packets.

By the way: Using a HT during hiking I would recommend sending packets every minute - this increases the chance one of them is received.

Thank you for the info and transmission time tip Michael. I will have a look at the path setting when I get back from work. From memory, the default setting is P3 on the FT5 under the path tab, but there is an option to set a custom path profile. Hopefully that this new info will sort it out.
Thanks again.
73
Tim
G4YTD