Any JT65 chasers in the crowd?

I am trying to gauge interest in JT65. I would be bringing my Macbook Air with me to some of the less challenging summits. But before I do, I wanted to see if anyone chases or activates using this mode. And as a followup, how about PSK31?

In reply to K5RHD:
PSK31 has been used on a few summits but not a lot. Have not heard any JT65 so far.

In reply to W0MNA:
Thanks Gary. WB5USB, NM5SW and I have a double summit day planned for Sunday. Look for us.

Regarding JT65 and other JT modes please remeber that the accuracy of the PC clock needs to be ±2 seconds synchronized or the decode becomes really challenging. From these slow modes I prefer the JT9, since it has better band efficiency compared to JT65 and the same QSO rate. Please consider taking a GPS mouse to sync your Mac clock with, if you decide to try the JT modes from the summit.

The benefit of PSK is the non-dependecy to time sync.

I’d be very happy to chase JT65. That might be a good chance to increase my NA chase count from its current lowly value of 2!

I wonder how well you will manage to decode anything from a pile-up of chasers though? That could be another reason to consider JT9, which gives more room for chasers to spread their TX frequencies.

In reply to K5RHD:
Hi Randy,
Conditions seem better to Eu activators than US activators at present so maybe JT65HF will bridge the gap. I’d be delighted to chase.

I wonder how well you will manage to decode anything from a pile-up of
chasers though? That could be another reason to consider JT9, which
gives more room for chasers to spread their TX frequencies.

This is an intriguing idea, as I’ve just recently started playing around with JT65 myself (receive only so far). Haven’t tried JT9 yet; will have to look into that. It could help to mitigate the fact that so many activators I try to hear are just too weak (only really tried SSB seriously so far; still need to work on CW speed).

From what Ive seen, it should be possible to decode multiple chasers signals at the same time.

Just thinking out loud here…would this be done on normal JT65 frequencies, or elsewhere so as to attract SOTA chasers specifically? Also, does the mode even support enough characters in a transmission to allow one to call CQ SOTA?

It will be interesting to see how this progresses. JT-9 and JT-65 are modes designed to make contacts as opposed to having meaningful QSOs, they are also very slow so I guess they wont appeal to everyone.

I’m not able to activate a lot of summits, but all of my activations are in PSK31.
Last week i activated DM/BW-054 in this mode, next week i will try to activate a summit in France.

The only drawback of running this mode is the extra weight for the laptop you need to carry. Maybe i will try DroidPSK in the future.

I’ve never done anything with the JT modes.

It will be interesting to see how this progresses. JT-9 and JT-65 are
modes designed to make contacts as opposed to having meaningful QSOs,
they are also very slow so I guess they wont appeal to everyone.

Indeed; these modes are not the best option for a quick (or low-profile) activation.

On the plus side, they are optimized for very low power/weak signal operation, which fits well with what we do.

I expect that my Fujitsu U810 should work nicely. It’s a UMPC which is even smaller than a netbook (5.6" screen, about the size of the FT-817 when closed). It runs for about 4 hours on a charge. Of course, transmitting a full power carrier for a minute at a time won’t be so good for the batteries in the radio…

And as
a followup, how about PSK31?

I know Tom, M0EYP has been using PSK31 on some of his HF activations - I’m not sure how that’s gone for him.

I’ve been using PSK31 on 2m here in the UK both as part of my PSK group (http://tiny.cc/a4ledx) and to activate SOTA summits with some degree of success. It seems to suffer a bit on 2m due to phasing issues. When working weak signal on 2m I’ve used Olivia and that’s been a good compromise (better at resolving the text and still giving you the freedom to ‘type what you like’).

I have qualified a summit on PSK 31 as well as completed a S2S. Interested in trying some DX with it as it is pretty easy to use. My laptop and signalink interface is about 1.5KG, not much extra weight to carry for most summits I activate. Hardest part I find is trying to type accurately when not sitting comfortablly. I should make more use of the macros in FLDigi that I use.

Hardest part I find is trying to
type accurately when not sitting comfortably. I should make more use
of the macros in FLDigi that I use.

…or get a camping stool. Makes a big difference and is well worth carrying on easier summits where you envisage stopping a while.

Just thinking out loud here…would this be done on normal JT65
frequencies, or elsewhere so as to attract SOTA chasers specifically?
Also, does the mode even support enough characters in a transmission
to allow one to call CQ SOTA?

I would recommend using JT9 in its normal QRG slot. More than 150 parallel QSOs fit easily to the passband of a typical rig, so a few SOTA calls can fit there easily. Normal bands are pre-programed in WSJTX software.

There is mechanism to send wildcards in tx in jt9 (also jt65 has this feature), which is 13 characters. So one could easily send xx/yynnn
as an extra info when calling cq instead of the locator.

Let me think about this. Please prepare your digi mode setups for JT9 testing tomorrow around 8-10 UTC from OH/JS-066. I’ll send message to the cluster when I am QRV. Most probably that will be on 20m or 30m depending on the band conditions.

I am pleased to announce that Toni OH3T made today first in the world JT9 SOTA Summit in OH/JS-066.

In reply to OH2NOS:
I worked OH3T on 20m using JT9 this morning; looked as if he qualified the activation using JT9, but I didn’t see any other active SOTA Chaser callsigns. Maybe I didn’t catch them all!
73

When I got to the summit Saku (OH2NOS) was already at full speed. I started setting my double to the trees while he was handling the CW QSOs with his ft817 with louadpeaker on so I could listen to the QSOs.

I decided to try to qualify the summit only with JT9 (the four QSO requirement). I had a loads of trouble with my USB connector that I found to be broken and the cable was loose between the Flex 1500 radio and the computer. I had to reboot the PC several times.

There was not that much action on JT9, but after several dozen CQs I finally got the needed four contacts, qualifying the summit

Here is one happy camper after the fourth QSO. (picture taken by Saku, thanks) 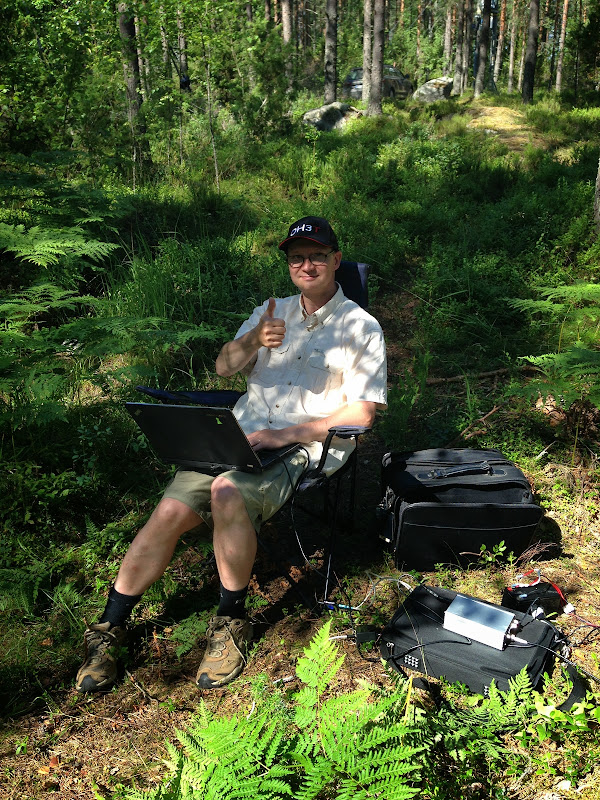 I was sending standard CQ and after that a message “SOTA OHJS066”.

Instead of sending RRR I sent “SOTA OHJS066”.

I think it is very pssible to achieve one qso/two minutes rate with indirect ack. That also requires running split, which is easy with JT9. you just need to unclick the RX=TX and from the bandscope you can pic a clear QRG for your transmission.

With standard JT9 this is the fastest possible way to make contacts and a reasonable qso rate can be achieved.

Just my thoughts on the “SOTA JT9 protocol”. BTW this is more or less standard practice already in JT9 when the regular contacts send quick reports on the band conditions…

Thanks again! it was a fun challenge.

Well done. I did the clock thing about a year ago using:
http://www.thinkman.com/dimension4/

Then yesterday I downloaded the software for JT9 etc. and was still fiddling around with the CAT stuff on the Flexradio so was not up and running when you came on. Very pleased that it worked for you 8) I like the thumbs up in the photo!

Hopefully I will be ready next time.

Sorry I missed you Toni. Saw the spot, but from my train to work! Saku’s signals were very good earlier, so I’m sure it would have worked.

In reply to K5RHD: I can do either and interested.