Scald Law GM/SS-125 is my now go-to summit when not doing anything else. It’s about 40mins drive and I can normally climb it in around 45mins. The ground seems representative of many Scottish summits so it’s a good place to test SOTA antennas.

My car broke a spring and my favoured garage was on summer holidays so I have been less mobile for the last 3 weeks. Anyway, full mobility has been restored and I have another week of vacation to use before my reduced working week starts. The WX forecast for today was good which was nice as I was hoping to get out yesterday to play 13cms with Jack GM4COX and Iain GM0ONN but it was rather wet yesterday.

Blue sky at 0800BST and it was going to cloud up then turn nice again before raining at 1800. Which is exactly what has happened. I was at the car park for 1040 which meant I should be on the top an QRV for when Ronan MM0IVR got to Black Hill GM/SS-167 which is a mighty 2.1km from my summit. That’s in 122GHz range

Amazingly dry ground, I’ve never seen the swamps on the path dry before. I was able to get up and get setup in time to find Ronan calling CQ on 40m. I was doing more tests on my Hamshop.cz trapped 40/30/20 antenna with an AA5TB style match box instead of the provided broadband unit which gets quite hot on 40m.

AA5TB style match unit. Switches select 3/4 turns input and 24/28 turns output giving 6:1, 7:1, 8:1 & 9.3:1 ratios. Cap is 196pf polyvaricon. I’ve mislaid the self-tapping screws since a major shack reorganisation so the box is held together with a rubber band for now! Note to self… when sending dots and tweaking the capacitor for best match, do not touch the RF out… it has sharp teeth and bites 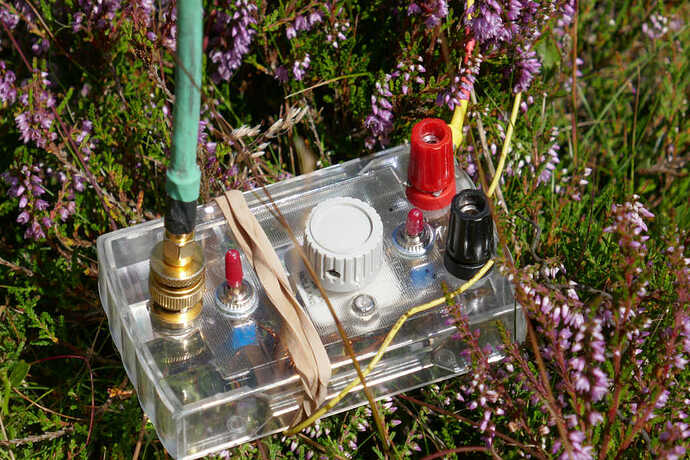 Ronan was an easy QSO on 40m SSB and that was also a complete. Good start to the day. After that I worked 40m SSB and CW. 10 QSOs seemed low but it was a weekday. The antenna was rigged as on Stuc a’Chroin where it was much livelier (HF conditions, ground, ?) with about 4.5m vertical then sloping to a 1m pole in the ground with the sloper pointing SE. I was on the East side of the hill to get out of the quit strong winds. Despite being 1st August I needed a fleece when the sky clouded over

After 40 it was 30m. Very few takers and I’m sure the sloping section was pointing in a poor direction. But 3 worked. I tested on Stuc a’Chroin and the antenna tuned up on 21MHz. So I went there next on CW. I was picked up by RBN and got a run of 11 mainly European chasers (OK, OE, F, HB9, CT, I, SM, DL) but the best was JH1MXV, not bad for what was a 20m EFHW (the trap isolating the rest of the wire) being tuned up on 15m. Japan on about 4W CW, that’ll do nicely thanks. I then moved to 28MHz where I could just match the antenna and worked 5 more EU stations on CW/SSB. Not many stations QRV but 28MHz was full of FT8 and the beacon band was filling up with EU beacons. Back to 21MHz and YB1EAO was 53 calling CQ but nobody worked him and he could not hear me. A62A was 59+ with a biblical sized pileup so that was a no-go. But I worked I/S56KVJ/P S2S on 21MHz SSB and after spotting myself was called by SP9BIJ/P for another S2S. Then I finished off on 14MHz SSB with another handful of stations. I seemed to miss out 20m CW. Excitement probably

Last week on Stuc a’Chroin, Eric F5JKK, was conspicuous by his absence but he was worked today on 21MHz CW. Just to confuse me I heard another call ending KK and immediately thought Eric must need something confirming but the keying was different. Listening properly it was F8FKK and having two F??KK stations doing SOTA chasing is just being tricksy

I used my Eremit 4Ah 4S2P LiFePO battery on Stuc a’Chroin but we weren’t QRV for too long. I gave it a partial recharge before I went out today. I was very pleased with how well it worked. 2hrs45 continuous RX and TX from not fully charged and the voltage hardly fell. It’s charging now and I’ll see how much it takes to get it to full again. But based on this performance I am very, very pleased.

Again I forgot to compare the original match against mine… something to do next time. I did have the 10m Delta Loop but whilst there plenty of beacons, not enough stations active to warrant setting it up.

The WX did improve as the forecast said. He’s a view out to Carnethy Law just before I went QRV. Sky looking good, wind dropped a bit and it warmed up. 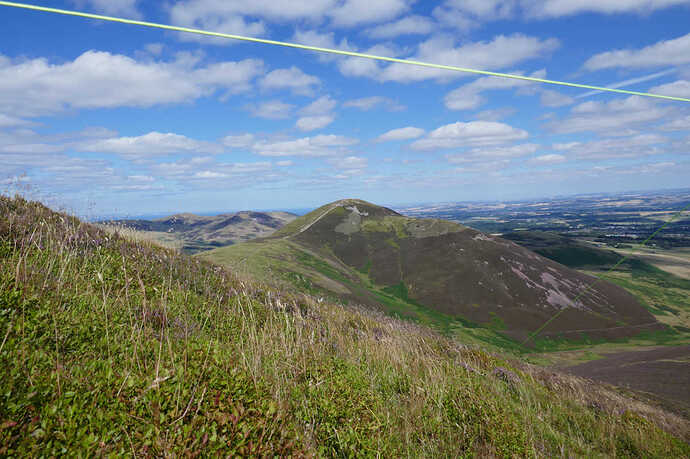 The three bridges across the River Forth 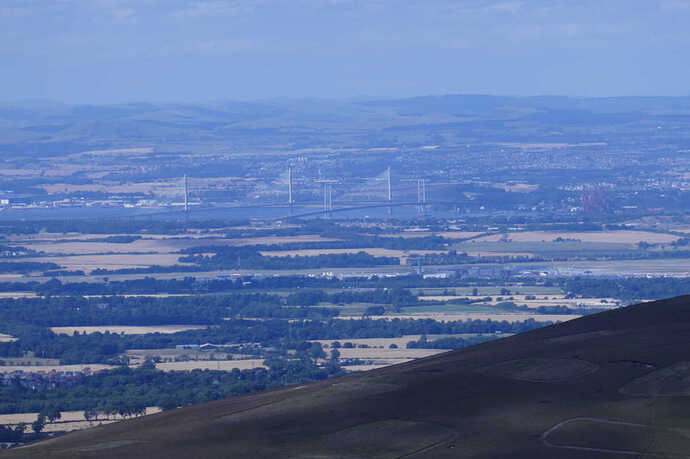 Panorama from East with East Cairn Law GM/SS-282 round to the North with Black Hill ('coz it looks black) GM/SS-167 then Allermuir Hill GM/SS-171 just before Carnethy Law.

Damn good day’s radio. Nice to have a play on 21MHz.

What are you using as a tune indicator? The LED style that goes dim/out as you get a match? Or something else.

I was using the 817 SWR display. I also had a few metres of wire thrown on the ground as a counterpoise.

My portable AA5TB match unit is actually a KI6J design as shown in http://www.n5dux.com/ham/files/pdf/KI6J%20EFHW%20Manual.pdf
You just have to remember to switch the detector out after tuning or you only get 25% of your power going to the Antenna.

Wow, I must be super lazy, preferring to carry a bit of extra weight and use my LDG auto-ATU. No faffing, a quick whirr of the latching relays and the match is made, pretty much regardless of what I am using for an antenna.

Good to see you out again after being restricted. Maybe next time you’ll have time to bimble over Carnethy and bag it for HEMA… I didn’t have time.

I haven’t got an auto ATU or I’d use one. Thought it must take, oh about 10-20 seconds to tune up… hit dash paddle and turn knob for minimum indication. With me about to have more free time it would be nice to design one. But that problem has been solved by many people so apart from scratching a mental itch it’s a waste of the minutes I have left. I’d buy a T1 but you never really see them for sale unless it’s part of an SK sale.

I’ve often wandered up Carnethy after Scald Law. It’s a nice walk. Never considered it would be a HEMA but obviously would be. Shame the guy who runs HEMA wont let me take part.

LDG auto-ATU. No faffing, a quick whirr of the latching relays and the match is made

You are rather missing the point, we are not tuning the 50ohm part of the circuit but the hi-z part, the Variable C is across the secondary of the transformer not the primary.

LDG auto-ATU. No faffing, a quick whirr of the latching relays and the match is made

You are rather missing the point, we are not tuning the 50ohm part of the circuit but the hi-z part, the Variable C is across the secondary of the transformer not the primary.

Not quite clear what you’re missing there … an LC matching network is about as efficient as a parallel resonant circuit.

Not quite clear what you’re missing there

Andy and I are talking about checking the SWR of an EFHW that is connected via an AA5TB type match unit. G4OIG is talking about using a 50ohm ATU

Great to catch you on 40m moon-bounce, Andy, and interesting to read about that antenna and matching unit combo - it sounds very flexible. Will you be weather-proofing the box?

I initially set up a random wire connected to my homebrew z-match. This was less than spectacular so was binned pretty quickly. Out came the trusty EFHW, cut for 40m and connected via a tiny K6ARK - style matching transformer mounted directly to the radio. The radiating wire was run straight up a 6m decathlon pole and then sloped from there down to the ground, with an extension length of kite line to keep the end up off the ground a bit. A counterpoise of very scientifically deduced length was chucked out along the ground.

Decent results on 40 and 20 and even a few on 2m FM with a little Yaesu VX-6 and a super-lightweight flowerpot antenna made from rg174.

Hope to catch you again soon.

Now, off to browse the hamshop.cz site ;0)