I’ll be staying in the Innsbruck area in the beginning of September. I got some hiking recommendations from a local and spent a night on bergfex.at, but it seems every hiking trail is as good as any other one. So, too much options to choose from.

To sort it out from the SOTA perspective, are there any recommended trails/summits or no-go areas? I don’t want to setup my station amongst hundreds of muggles and I’m not sure if a Flachlandtiroler like me can handle the difficult (high-rated) alpine trails.

And, any chances to qualify a summit on VHF during weekdays (preferably SSB)?

Hi Pom!
As a former local, I think I got a few tips for you

The summits around Innsbruck are, as far as I know, either not especially easy ones or have a cablecar and might be a bit crowded.

Summits I have visited and can recommend:
(Note that Tirol got two associations, TI and TL)

I am sure there are many more great summits but I did not activate a lot in Tirol yet. There are tracks on the SMP for most summits mentioned above.

VHF is not fun if you live down in between high mountains. There are usually very few VHF stations QRV in OE7, even in FM. Therefore I would not rely on VHF for the activations, especially not during the week. Anyway, you might find someone on the Patscherkofel 2m FM repeater OE7XTI (145.6125MHz -0,6) and get in touch with the locals. It is the most popular repeater in the Innsbruck region. The mobile calling frequency used is 145.500 FM as usual. I have not tried SSB there yet.

Have a great time in OE7 and good luck with your SOTA expeditions!
73 de Tom, OE9TKH

We are not from the Tyrol area but we did a very nice activation in June near Landeck.
Glanderspitze OE/TI-373 is a 10-pointer and requires only 360 m of ascent and 3 km from the top of Krahberg (Venetbahn). It’s an easy walk along the ridge with beautiful views into the surrounding mountains.

Good luck and enjoy the time in the Tyrol!

thank you for all the information, highly appreciated! Several summits are mentioned in both lists, your SOTA recommendations and the local’s (who in fact is my YL’s lad Ulrike) advice. A good ground to start from to sort our hikes out.

I can do that! Sounds like the scenery I’m used to.

There are some summits around that have similar ascends if you take the cable-car. I’ll activate some summits on my own when my YL’s gonna be on business and those ones are in the focus then. However, we’ll do some day trips together also and it seems there are several summits on the ridgeways.

VHF is not fun if you live down in between high mountains. There are usually very few VHF stations QRV in OE7, even in FM.

Again, thanks for the information. Looking forward to activating this amazing scenery!

A quick update: Gschwandtkopf OE/TI-690 was a good training area, not very different from the summits at home, except I’ve never ascended on an Alm. Patscherkofel OE/TI-358 is an easy hike and was great fun. And so was the coffee at Rudi`s OE7RDI and meeting Holger OE7HPI there. Thank you for your hospitality! Saile OE/TI-285 was our first alpine adventure with amazing views. For tomorrow, Reither Spitze OE/TI-298 is on the plan. Let’s see from which summit I will appear on the band on Wednesday. 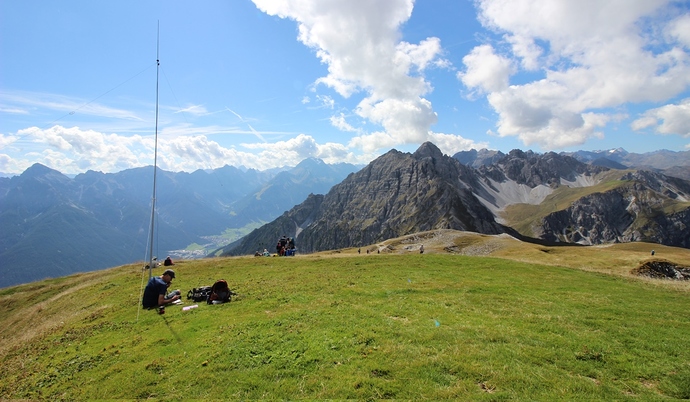 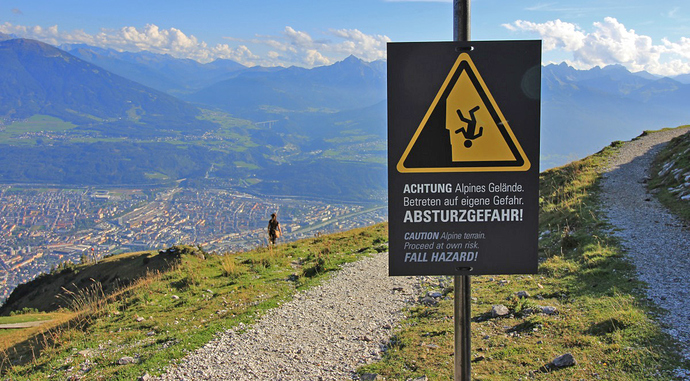 When comparing all the recommendations we got it soon turned out that a three kilometres hike with 400 m vertically are quite different from what we’re experienced. Hikr.org was another helpful source of tour reports but most of them either do not cross a SOTA summit or require a Klettersteig set (basic climbing gear) and skills. In addition, when arriving at the holiday home we were surprised to find free tickets for certain cable-cabs. Taking all this into consideration, we focused on four summits. Here we go! 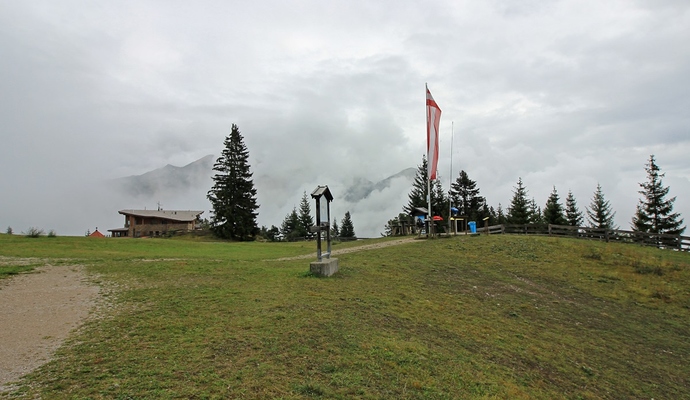 I started with one of Tom’s easy recommendations and parked the car in Seefeld at the Gschwandtkopf ski lift. A sign read ‘for ski lift passengers only’ which was good as I intended to go down by ski lift after the activation. But when I got to the summit I recognised two mechanics working on the summit station. All the way up I wondered why the lift stood still all the time and obviously maintenance was the reason. So I got free parking and saved 10 Euros for the ride. The mechanics had their radio on playing Johnny Cash, a good sound track for an activation. The weather was grey and cloudy but there were only two short and light showers. OE7FMH was my first chaser and in the qso it turned out that he had followed me on APRS and had waited for me to show up on the band, however he expected me on 2m. 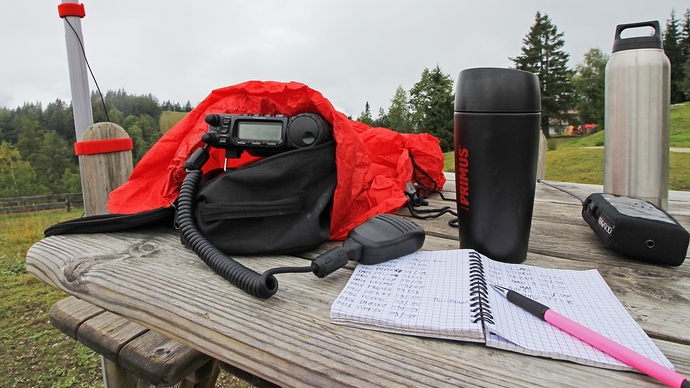 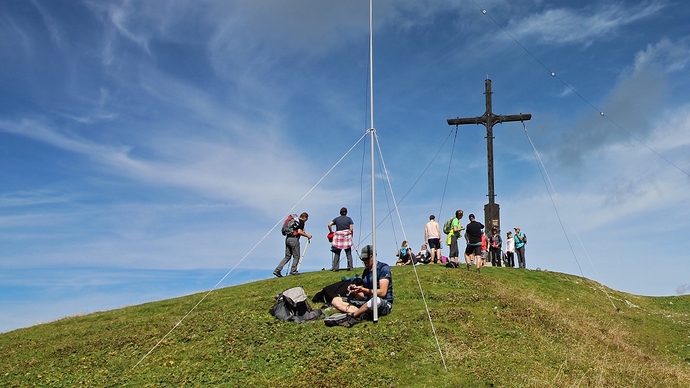 Or first hike in alpine terrain. Saile is a summit in Axamer Lizum, a popular skiing area. We took the Birgitzköpfl ski lift (free ride, yeah!) and already at the base station my set-up turned out not to perfectly fit to the Alps. With the FT-857D, the DX-wire ‘mini’ pole, antenna, battery, rain jacket, DSLR, water, milk, tea and a gas boiler, my rucksack was quite heavy and big. I didn’t had a clue how to get into the lift with it. The operator didn’t hesitate a second, took my rucksack, placed it in the gondola and told me to sit in the next one. First time I saw my radio station travelling ahead of me. When unloading my gear, the mountain station operator asked what was in the rucksack. A radio station, I said and he just shook his head. 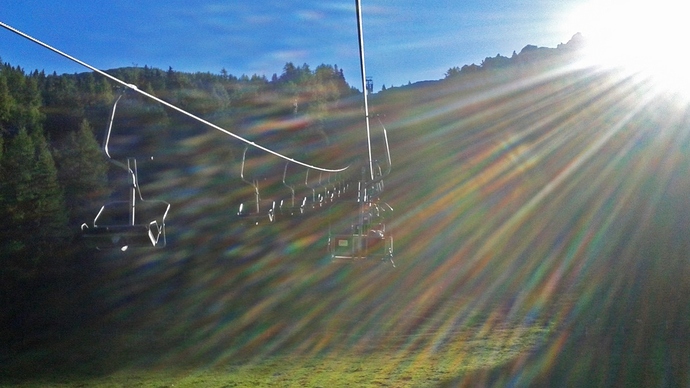 From the mountain station we took the northwestern route via Zwölferspitze. At first the trail was nice and easy but soon turned challenging and steep with a loose gravel surface. Several times I had to use my hands to climb. 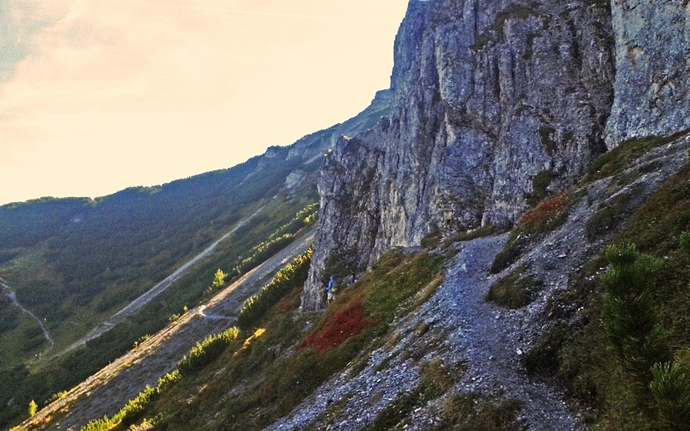 The summit has lots of space for a linked dipole and I built my shack some metres off the summit cross. Again, I used 40 m and after the first SOTA pile up I felt hungry and had a slice of bread before I wanted to change bands. I left the receiver on the the frequency and just before I finished my bread Mirko, DJ1AA called me. What a surprise! At home I often natter with Mirko on the local repeater. Seems, somehow the news spread that I was QRV. After some minutes of rag-chewing another familiar station from home showed up, Tom, DL9OBD/m. During the QSO with Tom the second round SOTA chasers gathered on the frequency and I ended the natters to work the chasers. 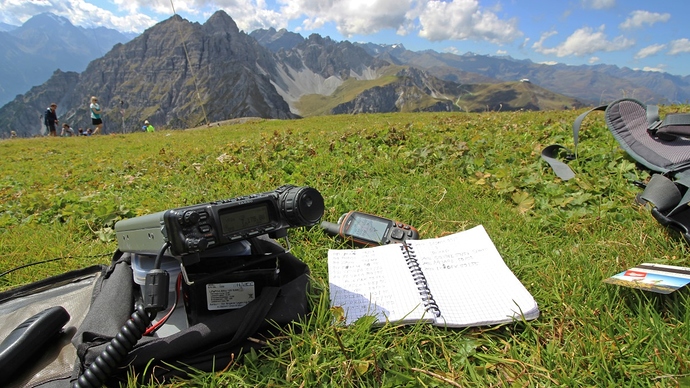 The weather was perfect with only a light and warm breeze and so we didn’t recognise that we spent much more time on the summit than planned. Initially, we wanted to hike past the Schneiderspitze to Hoadl and then to take the cable cab back to the valley. But we were a bit late and catching the last cab would have been quite a challenge. Instead we decided to take the short route back and had Apfelstrudel with cream at the Birgitzköpflhaus. 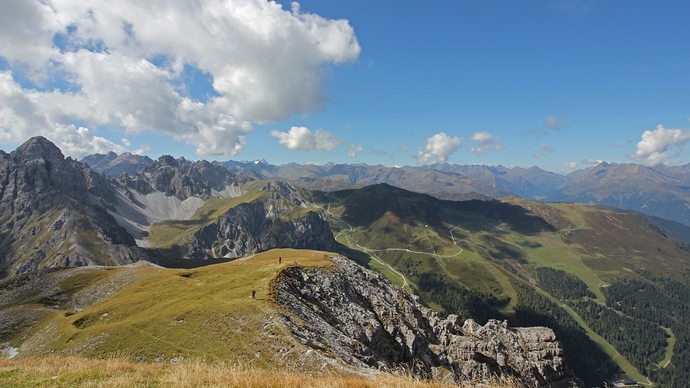 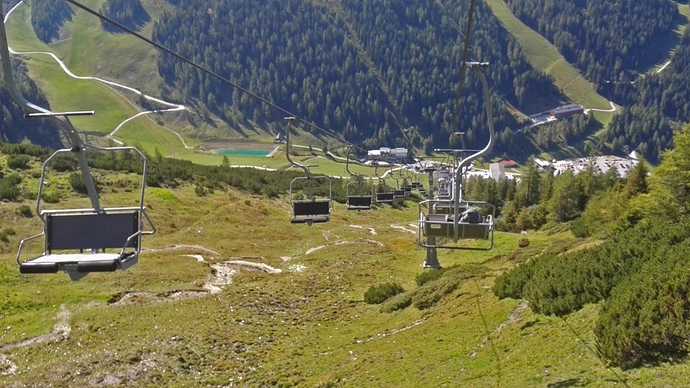 We ask for it! Fine business and beautiful pics, Pom!

Thanks for your report – appetizing, waiting for your follow-up.

I think it is better to have your backpack behind you than in front of you. If you plan to activate Brüggelekopf (OE/VB-505, near Bregenz) and take the chair lift from Alberschwende, they put the backpack on the next seat. This allows you to collect it by yourself. But imagine that such nostalgic chair lifts are only for people with plenty of time, hi. 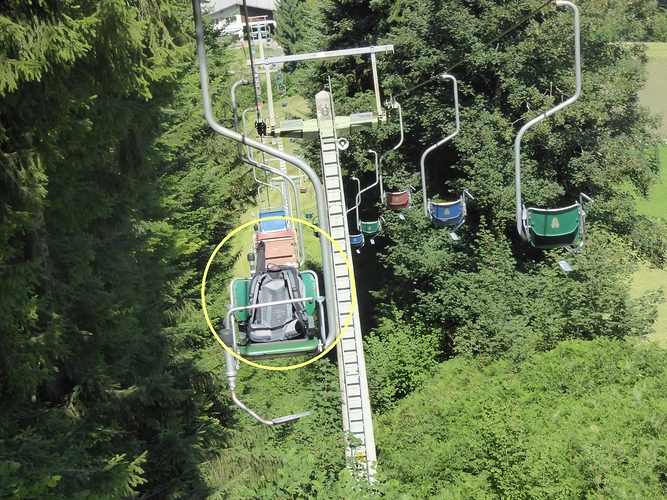 Is this my rucksack, Markus?

Deuter Gröden 35?
Where’s the GPS-thingy that used to be attached to the belt? 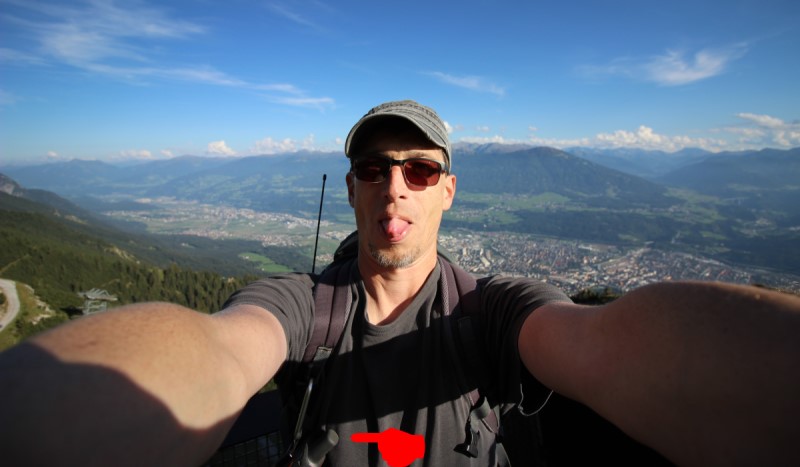 Nope, it’s mine! Deuter Futura 32. It’s made in Vietnam, so it’s red on the front side, but without the yellow star.

The thingy came to my life only later, but I really have one. The picture is from July 2017.

Unfortunately, the licence of this gem has not been renewed, so there is no chair lift at present to reach Brüggelekopf, and my rucksack can’t travel behind me any longer – désolé!