I’m a lucky man in many ways. Among other things, I am blessed with an XYL who, although lacking any interest in amateur radio, is even more passionate about hiking than I am. Knowing my own passion for SOTA, she’s realized that she can always get me on a trail if it has summits to activate! So on this past Wednesday, November 11, when she said, “I have Friday off and it’s supposed to be a gorgeous weekend – let’s go backpacking!” it didn’t take much to convince me. Especially when I heard it was a trail with four SOTA summits…

Friday morning found the us standing in sunshine under clear turquoise skies and surrounded by the last of the autumn leaf colors. We were hiking the Duncan Ridge Trail, a 17.8-mile trail that arcs east-west through a section of the Appalachian Mountains in the northern part of the state of Georgia. It is regarded as one of our more difficult trails because of frequent climbs and descents as it crosses over multiple peaks. The accompanying map shows seven of those peaks; there are other, lower summits that don’t show on the map – but they certainly show underfoot!

After driving up from our home near Atlanta, at 0940 local time we started walking from the eastern of the trail. Almost immediately we were climbing to our first summit, Coosa Bald (W4G/NG-006). As it happens, I had activated Coosa Bald earlier this year and couldn’t claim additional points. Instead, we took a quick gaze over the vistas and then continued westwards. Since neither the XYL more I had ever gone further than Coosa Bald in the past, we were entering terra incognita. 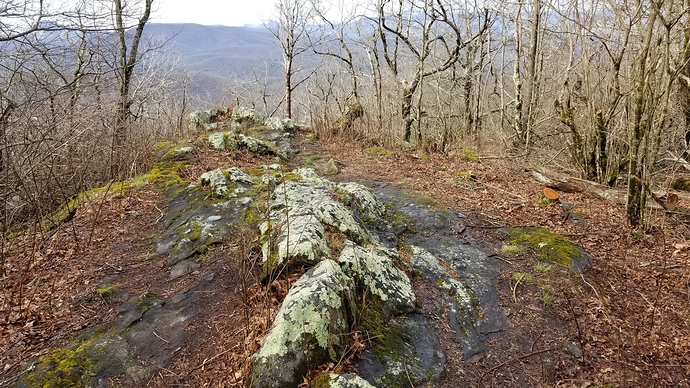 After the long descent from Coosa Bald, about 2 miles of moderate up-and-down if took us to Buckeye Knob (W4G/NG-017), the first SOTA summit of the day. While the XYL settled down to lunch, I quickly strung the end-fed wire antenna. For a backpacking trip with a full complement of gear, I minimize the radio package by leaving behind, among other things, the telescoping fiberglass fishing rod that serves as an antenna mast. Instead I tied the far end of the antenna to one end of a hiking pole, and then lashed the pole as high as I could reach on a convenient tree. Then I set up the Elecraft KX1 and started calling CQ on 20 m CW. Fortunately RBNhole quickly spotted me and I was in business: nine QSOs in 13 minutes, including three transatlantic contacts: F4WBN (his aluminum farm always puts him at 59 here in the Appalachian Mountains), EA7GV, and EA2IF (thanks, Guru!). The rest were mostly in the U.S. West and western Midwest. 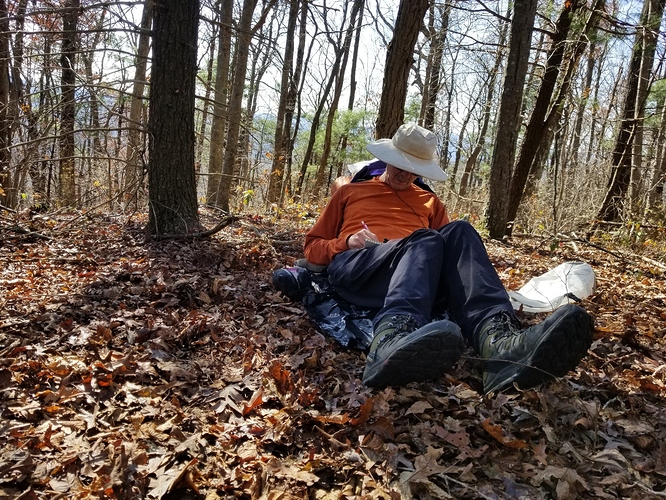 Normally the XYL gives me an hour on a summit while she reads a book, and that’s enough time to activate on at least two bands. This time, we had miles to go and more summits to cross. So I reluctantly packed up as soon as there were no more calls on 20 m, and we shouldered our packs and moved on. By now the weather had warmed to a comfortable low 60s F and the skies remained cloudless. We crossed more peaks including West Wildcat Knob and Buck Knob (unfortunately neither SOTA summits) before descending to Mulky Gap, where we filtered water from Mulky Creek to replace our dwindling supply.

By now it was 1600 local time and the sun was getting low. Some passing trail runners assured us there were ample campsites on the summit of Akin Mountain (W4G/NG-029), which we would climb immediately coming up from the gap. We therefore planned that I would activate the summit while the XYL put up the tent. Unfortunately, we discovered the trail skirts the summit which is covered with thick blackberry bramble. No campsites to be seen. Fortunately, the trail is in the activation zone, so I quickly set up the rig and bagged 7 QSOs on 20 m CW, all in the American west, to qualify for the 8-point activation. 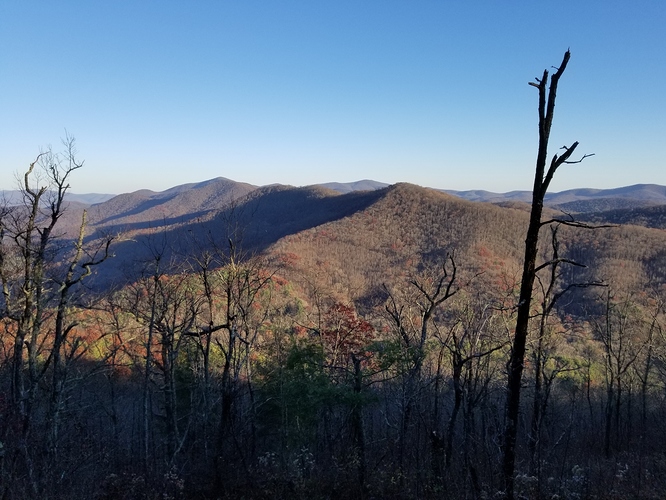 Then I packed up and, with the sun just setting behind the mountains, we raced down the trail (well, as fast as you can go with the full backpacks) hoping to find a campsite before dark. Everywhere we passed was covered with brambles and saplings, which we were loath to cut down to create a new campsite. After Akin Mountain there’s a quick, shallow descent before a brief climb to the non-SOTA summit of Clements Mountain, and then a long descent to Fish Gap. Just before the gap, and in the waning twilight, we found a campsite with a clear horizontal surface just big enough for a tent. Putting on our headlamps, we set up the tent and stove, cooked a simple dinner under a star-studded sky, and were in our sleeping bags by 2030 local time. The temperature dipped to just above freezing, but we were snug and cozy. We’d hiked about 10.1 miles that day, and slept well.

On Saturday morning the XYL took the lady’s privilege (so she said) of staying in the warm sleeping bag while I got up, fired up the stove, and cooked breakfast. A beautiful dawn was breaking as we ate and then packed up. By 0730, in full light, we were walking again. The day started off cold, but quickly warmed up and we shed our layers of fleece.

We crossed through Fish Gap and then started up Parke Knob (W4G/NG-028). The trail doesn’t actually climb to the summit, but rather skirts it on the north side. Instead of following the Duncan Ridge Trail westwards out of Fish Gap, we took an alternate trail that was visible a few meters to the south. This turned out to be an older part of the Duncan Ridge Trail, which apparently had been abandoned in favor of a re-routing. This older section still appeared on the Open Streets Map version I had on my Garmin GPS, and the old blue blazes were still visible. This older trail crossed closer to the summit of Parke Knob than the current trail but even so didn’t cross the summit, so near the trail’s highest point I left the XYL to her book and started bushwhacking upwards.

After about 300 vertical feet on a steep slope, I gained the summit. Setting up the rig, I started on 20 m CW and was immediately rewarded by three calls from Europe: F4WBN again, HB9HW, and OH9XX, my first contact from Finland. Then there was silence, and after repeated CQs I gave up and switched to 30 m CW. I picked up four more QSOs, enough to qualify for the 8-point activation.

One of those 30m QSOs was with Steve, WG0AT whom I’ve contacted a few times. Let me use this opportunity to thank Steve for his help in getting me active in SOTA. I first met Steve at a hamfest in Huntsville, Alabama when he spoke to a group of QRP operators and presented a video of his SOTA activations with his famous goats. That presentation did much to motivate me to get into SOTA. When I met him again the following year at the Dayton Hamfest, he offered me some advice on some wire antennas for SOTA. Now his QSO helped me accrue the eight points that put me over 500, halfway toward Mountain Goat. Thanks, Steve!

I packed up and descended, bushwhacking with the aid of the GPS to regain the trail and meet the XYL. We followed the old trail until it rejoined the current route. With no more SOTA summits on the route, the rest of the day was simply beautiful hike under clear blue skies, through the remnants of autumn in the Appalachian Mountains. We crossed over High Top Mountain before descending and climbing Payne Knob, then Gregory Knob, over the skirts of Rhodes Mountain, and over Licklog Mountain and then Wallalah Mountain. The trail definitely filled its promise of multiple ascents and descents! 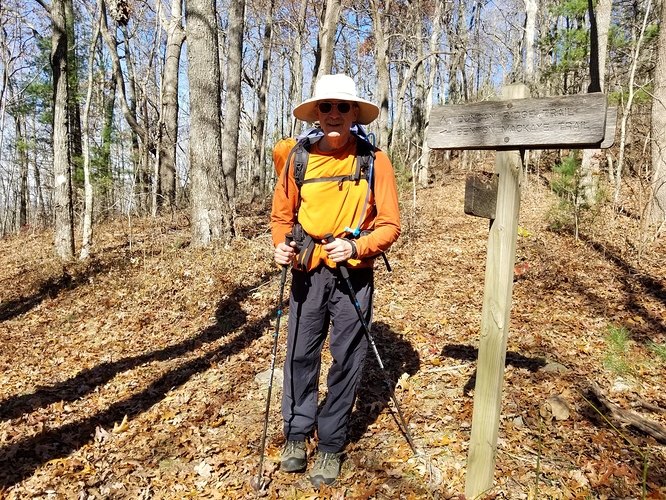 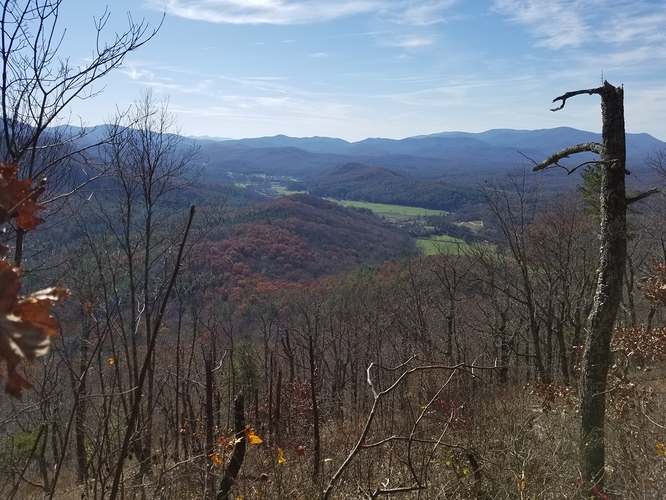 After Wallalah came our long, final descent to the trailhead on Georgia State Route 60, where our car was parked. We finished the hike at about 1530 local time, plenty of time to get home before dark.

This is a great trail for combining backpacking and SOTA. You can start from either end, although starting from the Coosa Bald end gives you slightly less total elevation gain. Give it a shot!

Great report, Scott. The weather has indeed been beautiful for hiking and SOTA!

It is possible to reach Akin without the blackberry bramble, or it was when I was there in 2015.

Great adventure Scott . I too can thank Steve for a video about SOTA back in 2011 on YT that started my SOTA journey as well, which also entailed finding the summits for my home state and adding them to the program. Back then vk3wam Wayne did the mapping for me, I just watched with amazement how he operated the PC at the time on mapping and xl spread sheets getting the list right for Management. Keep up the good work on your quest to Mountain Goat and beyond.
Regards
Ian vk5cz …

I just love SOTA success stories like this. Keep up the activations and the literary contributions.
Dean ~ K2JB

t is possible to reach Akin without the blackberry bramble, or it was when I was there in 2015.

The XYL and I took another couple up to the summit of Arkin a few weeks ago for a socially-distanced picnic lunch, just a short climb after parking at Mulky Gap. We found the exposed rock and, with the winter die-back of vegetation, could just barely perceive a trail to the summit. The summit is completely overgrown with brambles. There was neither campsite nor fire ring to be seen.

It is possible to reach Akin without the blackberry bramble, or it was when I was there in 2015.

I definitely saw no fire ring. I got latched onto a few times by vegetation, but it wasn’t as bad as some. I did Hullander Knobs the next day and it was WAY worse.

I did, however, see the rock you referenced. I pointed that out in some access notes as the best place to start your bushwhack from.