Good WX predicted so a hill with a nice view was needed that is not at the far end of the universe. Andrewhinney Hill was selected, I haven’t been here since 2009.

Climbing out of the valley, ground frozen hard. White Coomb SS-030 behind. 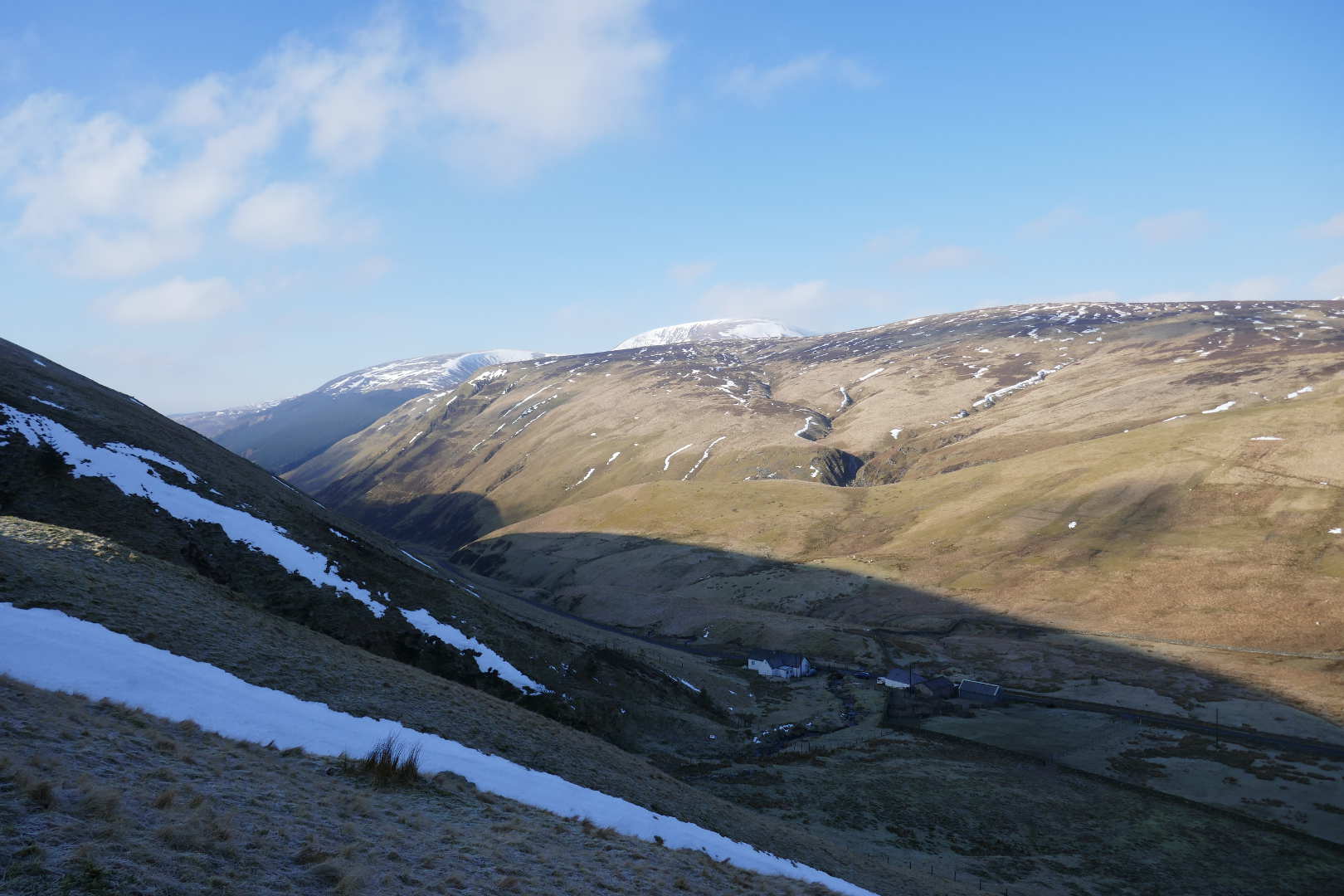 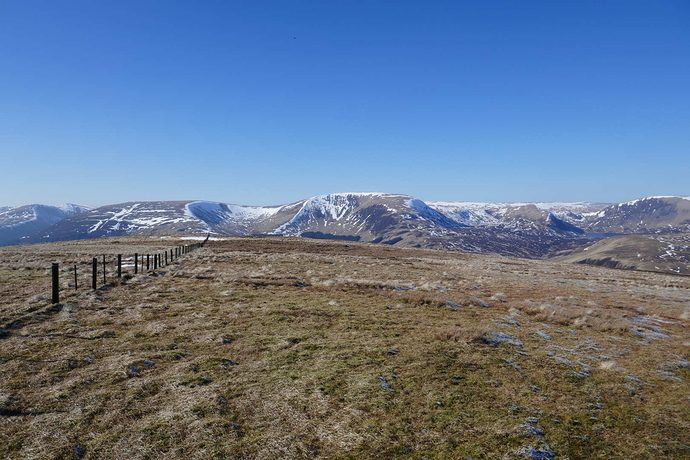 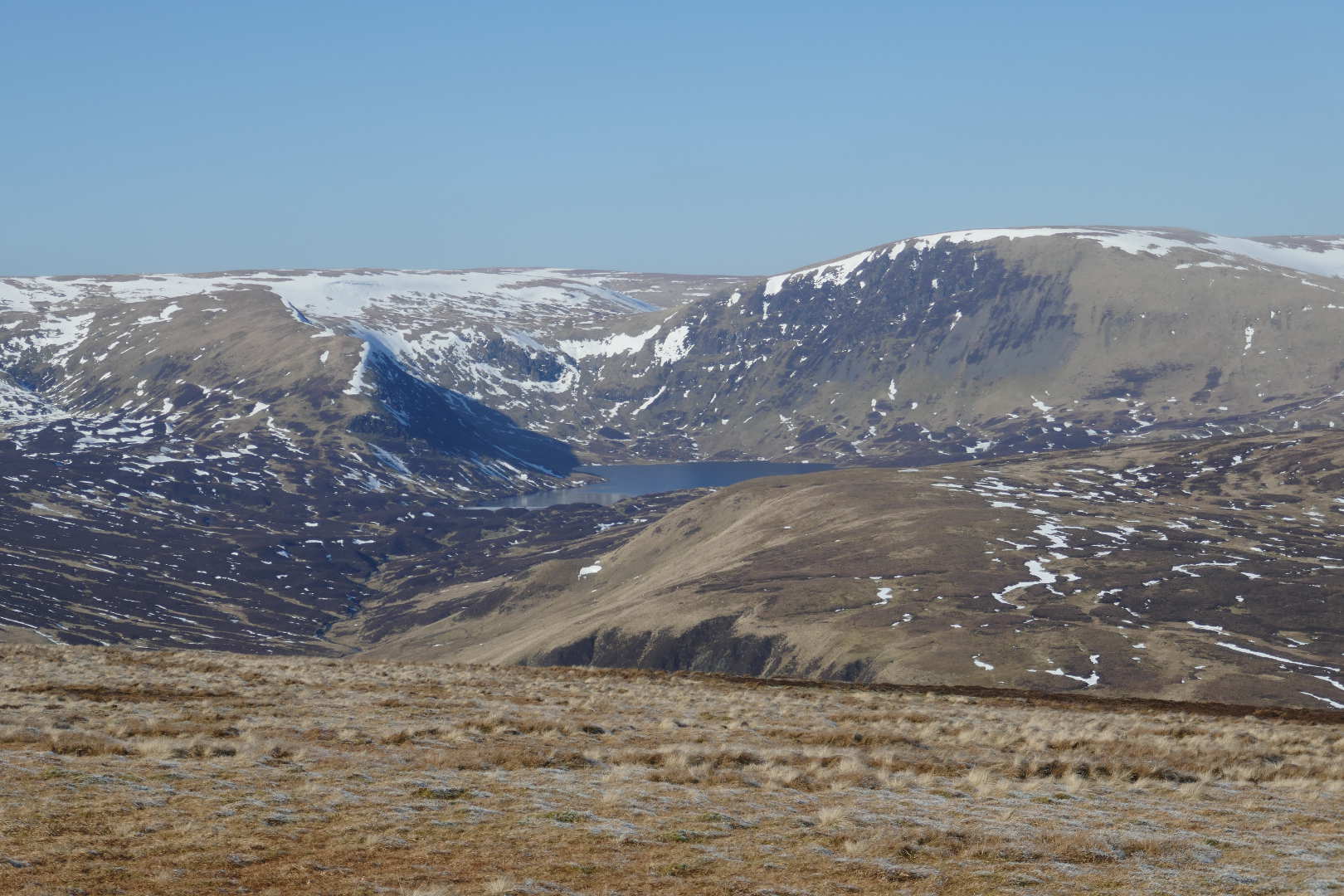 White Combe showing a common descent route by the drystane dyke and through the craigs. 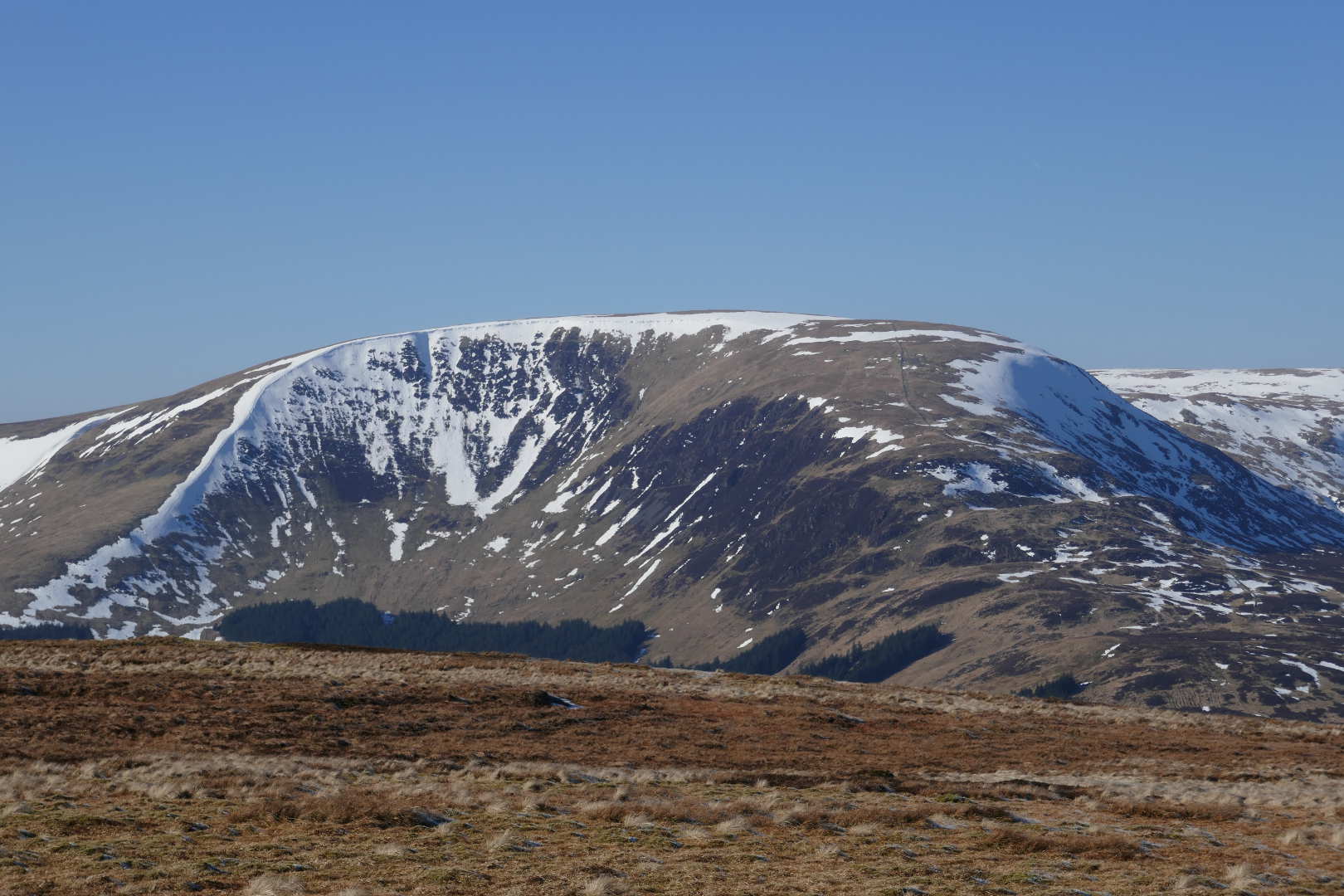 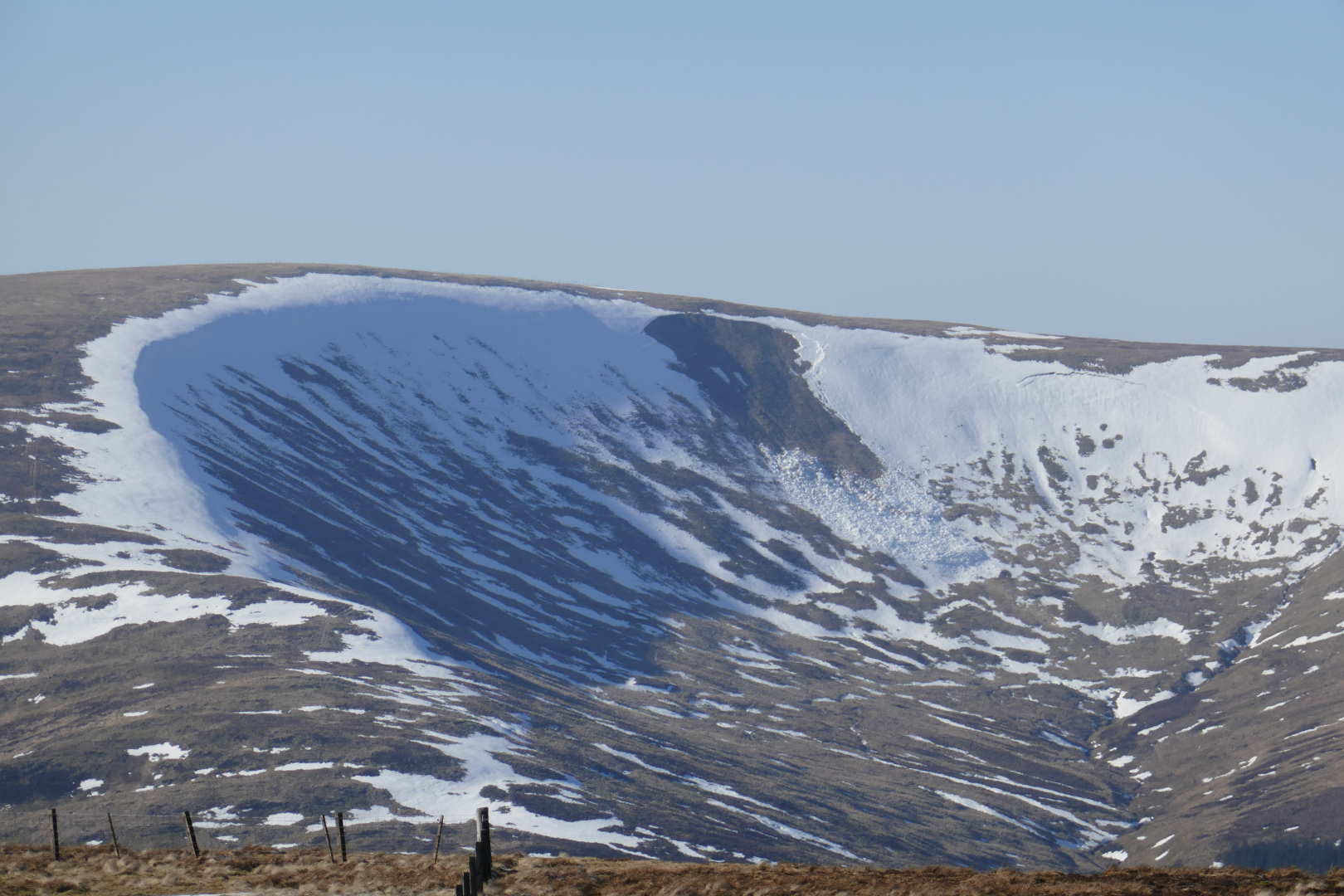 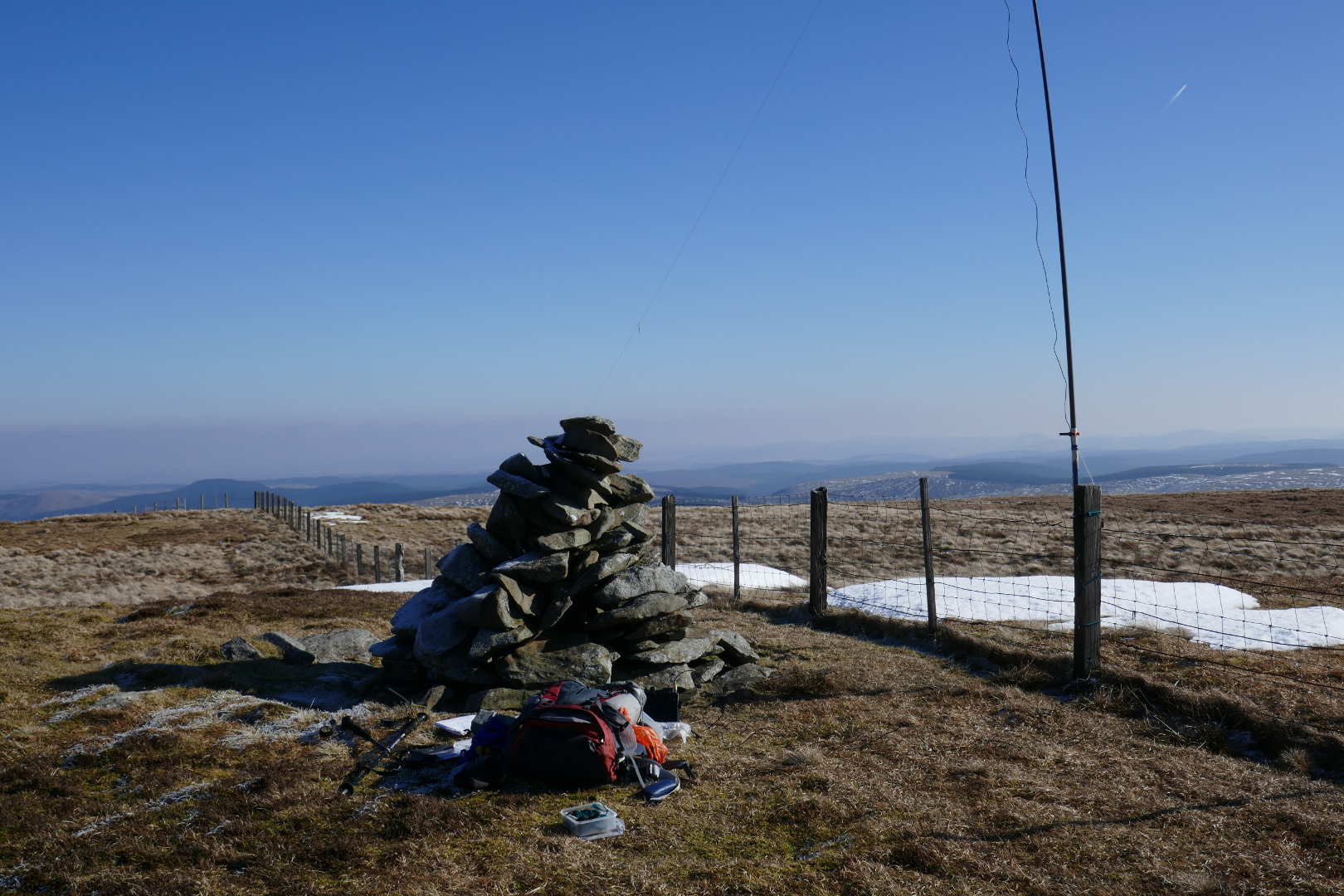 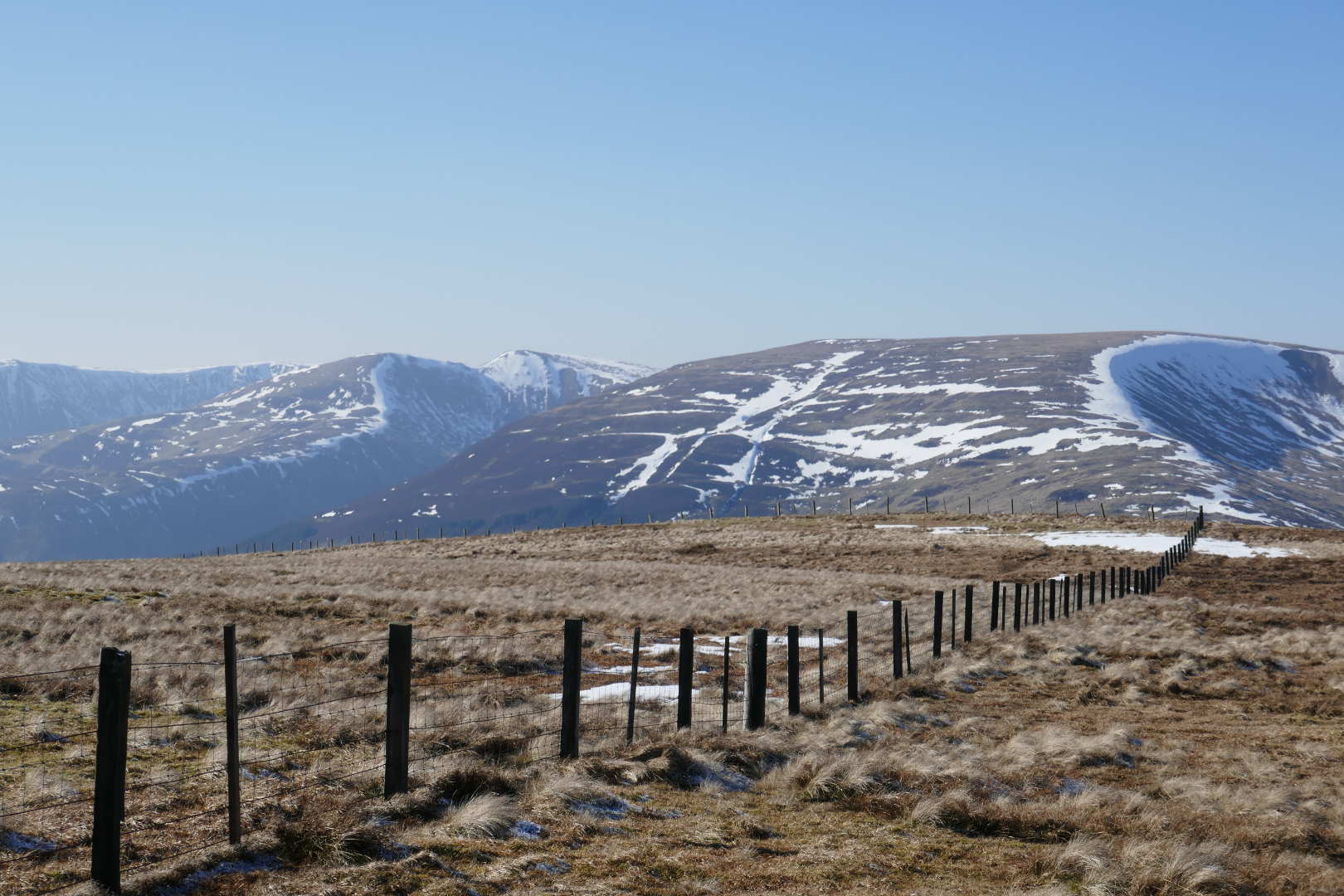 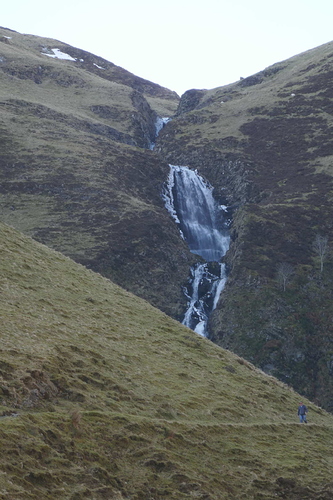 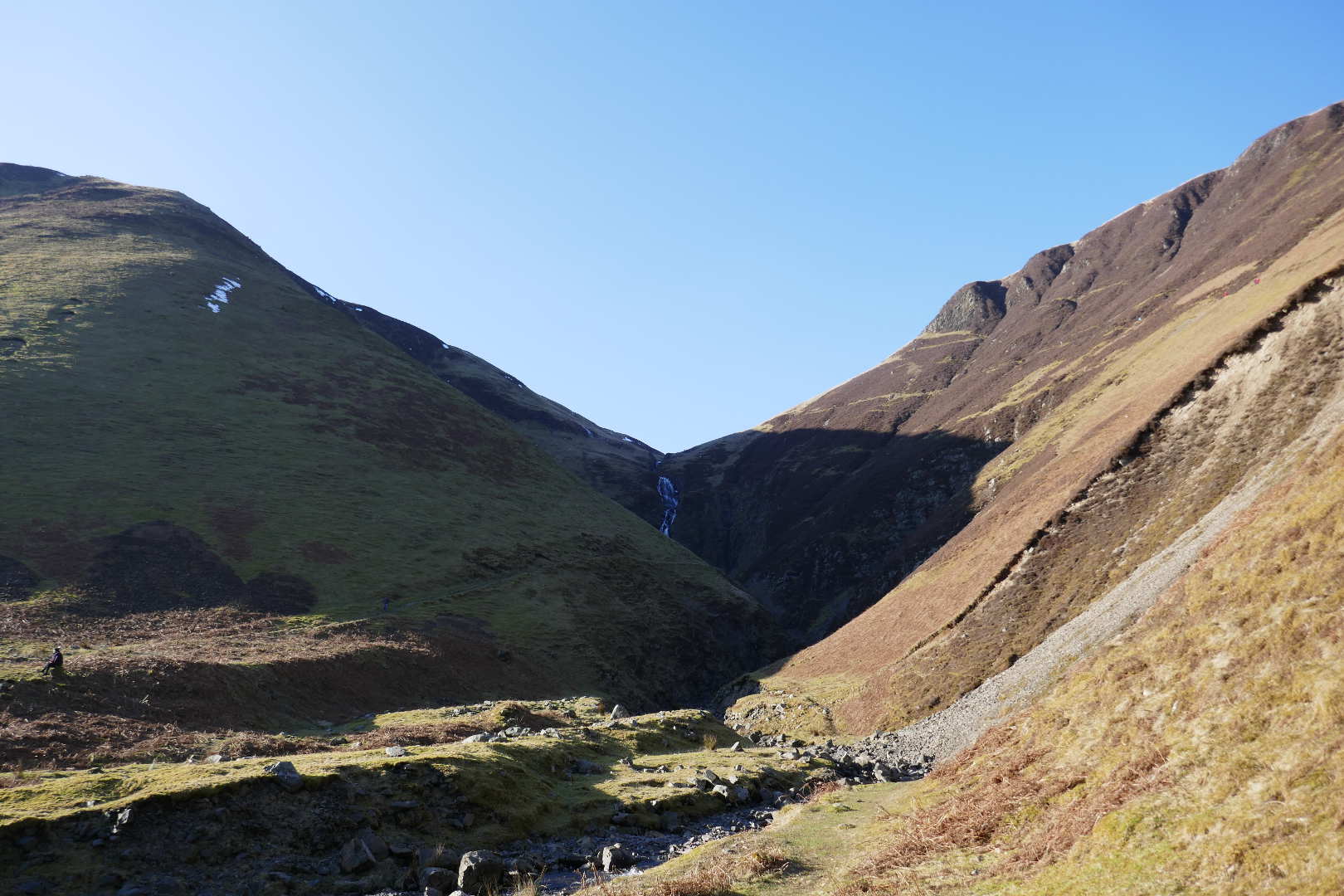 The sky was a good colour for Scotland. 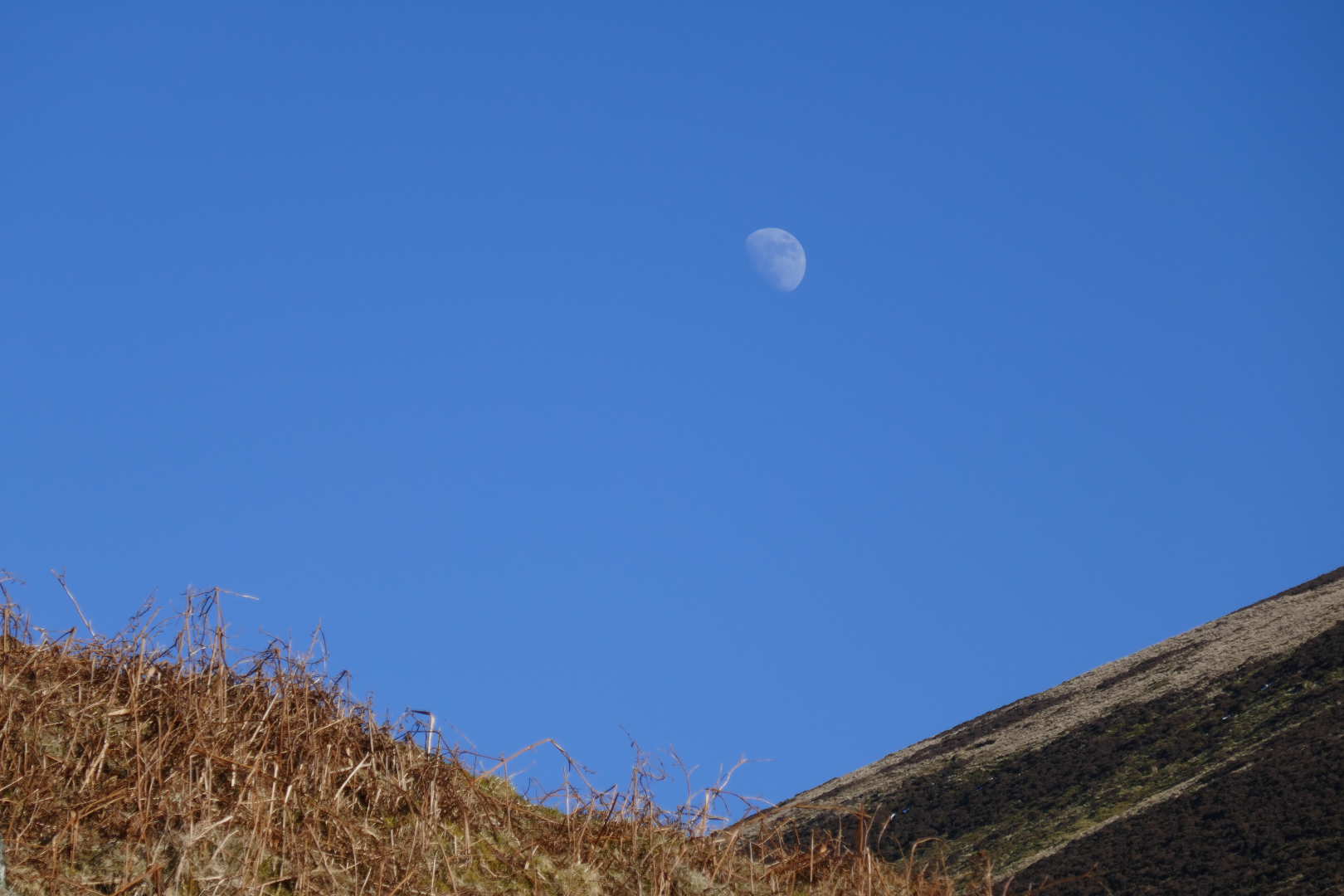 Zoom of the cairn on White Combe hoping it may show The Shadow and Companion. One of them should take a 2m FM handy with them so they can call neighbours on hills across the valley.

Hi Andy What cracking photos its views like that makes you look back with memories of some of the splendid places you have been .Great to catch you this morning on 60 metres 73 Geoff G6MZX

New camera Geoff. Lumix TZ100. All of those were taken in auto-auto mode. I pointed, framed and clicked the shutter, the camera did the rest.

that says it all G6MZX

New camera Geoff. Lumix TZ100. All of those were taken in auto-auto mode. I pointed, framed and clicked the shutter, the camera did the rest.

that says it all G6MZX

The camera did not select the viewpoint, or the zoom setting, or frame the shot. The camera knows nothing of composition, leading the eye, or the golden mean. It is just a tool. A good picture needs the eye of an artist, Andy has that eye.

I suggest that you check your handie Andy. I was QRV on both 2m SSB and FM between 12:35 and 13:20 - plenty of opportunity to receive a call. I looked for you on 30m CW, but it looks like I missed you by a few minutes - unfortunately my internet service kept dropping out, so keeping track of where you were was difficult. I was on 30m CW myself from 13:20 and would have welcomed a call from you.

Basically it takes two to tango. Making an obtuse comment in your report doesn’t sit well with me, but I can’t say that I am surprised by it.

Pleased that you at least enjoyed the WX and the views.

A good picture needs the eye of an artist, Andy has that eye.

Well it’s always nice to bask in praise. I would still suggest that it is mainly the camera.

Over the last 14 years I have had several compact digital cameras as the size and weight of a DSLR doesn’t fit with SOTA. The previous was a Panasonic Lumix and that was bought after playing with a friend’s model. The standout features were the lens (Leica design), the battery life and the software. Auto modes worked very well.

I bought a new one for various reasons but mainly because I was worth it! The improvement is again the Leica designed lens is outstanding (for size and cost) a bigger sensor helps. But it is the software which is doing the work. It really is astounding how much better it does the same jobs as the older model. It really gets things right without trying. I have yet to use most of the extra features, just put into intelligent auto, point and click.

The other thing is this has an independent viewfinder. I don’t wear glasses when I’m walking so I cannot focus on the LCD screen. Most photos in the last 6 years are a result of holding the camera in roughly the right direction. Now I can see! The viewfinder has a focus adjustment so I can look without glasses and see what is the frame. The gyros show you are holding it level.

So maybe I know what will look good. Maybe. But had I been out with the old one, taking the same views, I don’t they would look anywhere near as good. There is, to me, an instant, standout improvement compared to the previous model.

I should read the manual… 350 pages I think. So far I turned it on, pressed some buttons to play with the setup (works just the same as the older Panasonic) and went from there. To me, that says the UI designers and programmers know what they are doing!

It’s the camera. Trust me.

It’s the camera. Trust me.

No, Andy. I can’t agree. The camera is responsible for the resolution, colour and tonal balance, the improved view through the camera helps you see and adjust the composition - but the camera does not compose a picture, the photographer does. It does not matter if you take several minutes fussocking about composing the picture or get an instant recognition of the presence of a well balanced scene, and snap it…or even take a rough snap and then play about with it in picasa or some equivalent to improve it. The photographer has the eye that makes an image into a thing of beauty. A happy snapper with a good camera may take an occasional - very occasional - picture that by accident is a thing of beauty in itself, but the possessor of a good eye will do it much more often even with a poor camera. Take your full view of the Grey Mare’s Tail, look at how the banks on the lower left lead you into the picture and the slopes left and right, the skyline and the sunlit banks sucks the eye into the shadow in which the waterfall is a mysterious glimmer rather than a splash of light. Point the camera a bit to the left or the right, up or down, and the drama would be dissipated. It doesn’t matter whether or not you were conscious of the balance of elements of this picture, you did it right, it is one that I would happily hang on my wall!

I suggest that you check your handie Andy. I was QRV

I’m sure you were. And all the other bands. Never doubted that for a second.

But your trip up is a unusually low key hence The Shadow. Maybe I just don’t look in the right places for any announcements I only found out when I got a text 30mins after leaving the summit just happened to look at my phone only to see a spot for Paul. Yes, there were alerts, but I don’t look at them that often.

Had there been a little more publicity I’d have known you were up here I could have picked a summit for Sunday that would have been a complete for both of you as any of your three targets would be a complete for me. Mutual completions work for everyone, it’s not like it’s a contest with a winner.

And to my mind it would have been just suitably silly to have been able to take a photo of the pair of you standing by the White Combe cairn from my summit. As it is the fence is too far back and down to be seen from a distance and I’m guessing that’s where you would have had setup assorted tarps etc.

For various reasons this expedition may have been less well trailed than some of our others, but I did put an alert on Sotawatch on Saturday morning at which time your own alert had not been posted. We only found out about your intentions when we checked alerts on our way up on Sunday morning.

Gerald did put out a call on 2m FM on our arrival at the Grey Mare’s Tail carpark, in case you were listening on the way up.

I was particularly keen to work you, as Andrewhinney would be a complete for me so when I started my activation I listened on your spotted frequency of 7.178MHz ssb but you were not there, I tuned up and down but found no sign of you so went to 60m where my first contact (Frank, G3RMD) confirmed you were now doing 7MHz cw. I kept an eye on the spots, but you never returned to a spotted frequency/mode where I could work you. Gerald also put out calls on 2m FM throughout his activation, hoping to catch you.

Gerald and I were both actively seeking you to the best of our ability, unfortunately we never made it but it was not for the want of trying, which is why we found your comments somewhat hurtful.

Mea culpa. I typed my alert about 8pm Saturday evening and forgot to hit the POST button. I spotted it still waiting on Sunday morning when checking the WX before leaving. Quick hit of the POST button and we we’re in business. Or not.

Yes, we wimped out and used the fence which at least meant we had some relief from the wind and didn’t have to try to get pegs in the frozen ground.

Didn’t understand your reference in relation to us on White Coomb, but you have now explained it. Thought it was a side-swipe blaming us for the lack of S2S, but evidently not. Similarly we didn’t know about you doing SS-083 until Paul checked the alerts as we were about to exit the M74, so couldn’t let you know we were across the valley. As far as our alerts were concerned, I could have received the call for surgery, so we didn’t put any on in case we had to cancel.

It would have been nice to have an S2S on 23cm, but you may have not been suitably equipped. So near yet so far…