I’ve never been up Y Lliwedd before. I’ve seen it from the Pyg/Miner’s Track and from the summit and thought it looked pretty fearsome so I’ve always avoided it.
After asking lots of people on how difficult it is, I’ve had answers ranging from walk in the park to near death experience so I figured the only way was to try it and see if I could do it.

I decided to follow @MW0WML 's route from Pen y Pass around Llyn Llydaw and up from the north east as this seemed simplest and easiest to bail out from if needed.

As I’d driven over to Snowdonia a couple of days earlier to activate GW/NW-037 and 055 I didn’t want to do it again so soon, especially if I didn’t make it up to the summit which would have turned it into a very expensive wasted trip with fuel, parking etc.
Fortunately Transport for Wales introduced a new bus service last summer - the T10 which runs from Corwen to Bangor specifically to allow people like myself to get from North East Wales to Snowdonia without the car so I thought this would be a perfect opportunity to try it out.
The bus fare is £5.70 for a day ticket which lets you go anywhere in Wales on any bus. This trip would have cost me about £20 in fuel and parking. 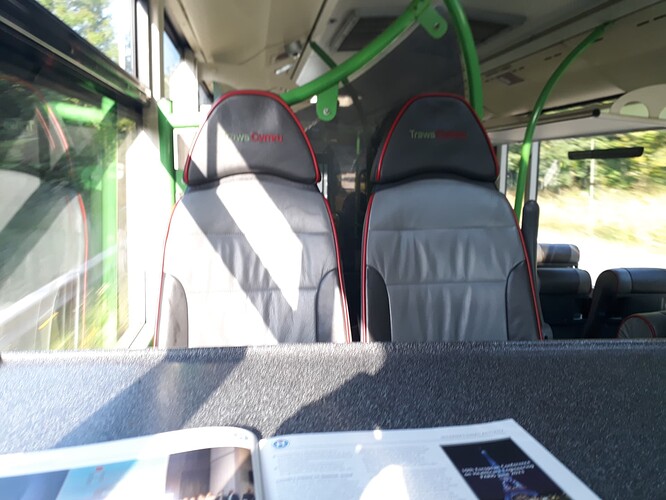 There’s then a 40 ish minute wait at Betws y Coed for the S1 Snowdon Sherpa bus which is enough time to find some breakfast. The S1 bus gets you to Pen y Pass for 9:34 BST - that’s the earliest you can get there from my area.

The walk up to the summit starts off straightforward along the Miners’ Track, it’s a gentle gravel road for 1.5 miles (in a couple of places it was tarmac) until Llyn Llydaw then you bear left instead of right over the causeway up to Snowdon. 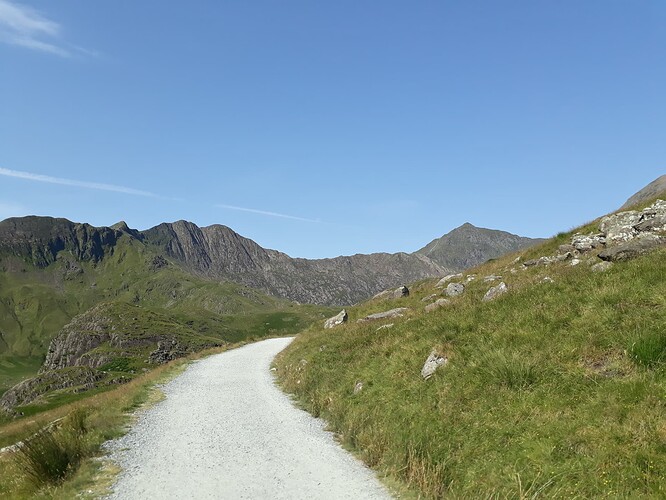 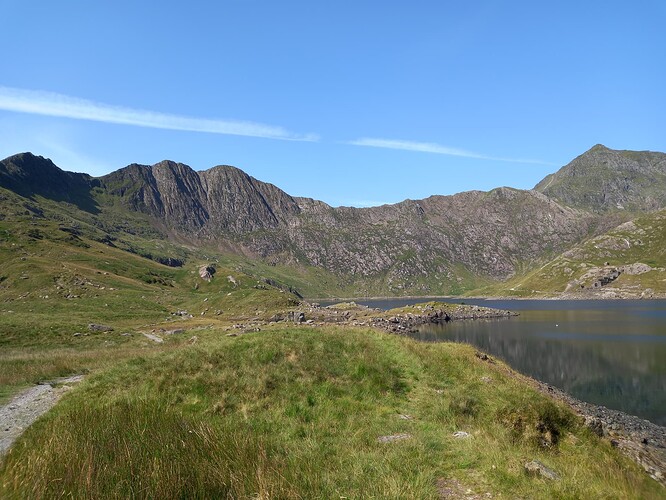 The path starts to climb and becomes man made stone steps for a while before reaching the cliff which is part narrow stony path and part scramble. The scamble up was reasonably straightforward although I had to stop a few times to look at a couple of routes to decide which was the best one, and often got to the top of a section to meet what looked like a well made path coming from a different route I hadn’t even spotted. Exposure here is minimal, just don’t look down or do anything daft and you’re fine.

After this you reach a plateau with a nice wide path. 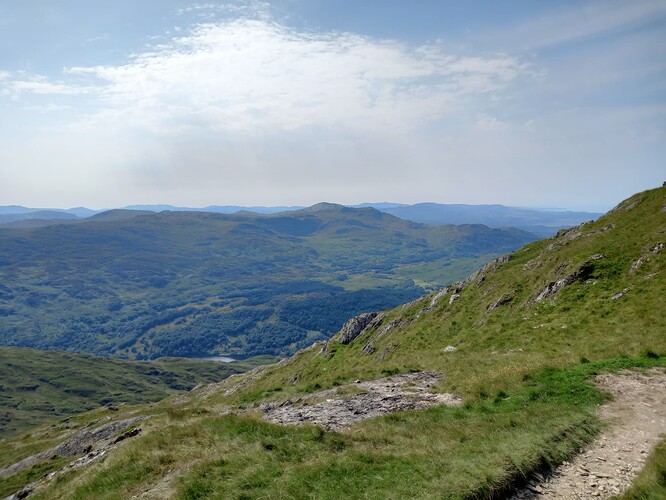 This heads up towards Lliwedd Bach (which you go around) and you reach the first stone slab to descend which you can walk down as there are lots of footholds. The path then heads up to the East Peak where it gets quite steep and easy scrambling/really big step ups are required with a short section where the path is narrow with a sheer drop to death about 0.5m from you 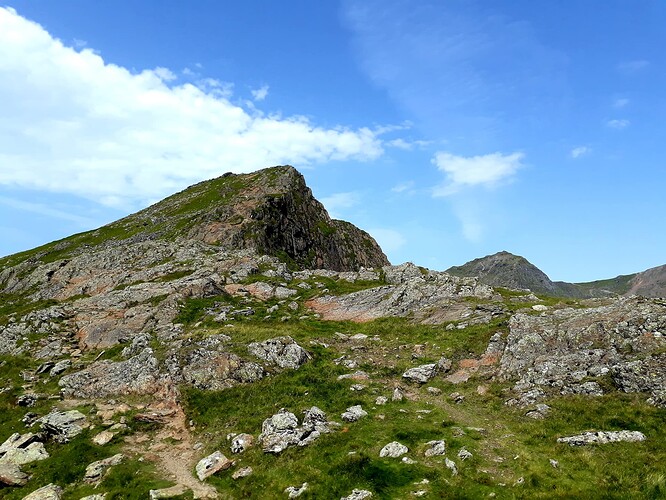 Down again and then up to the West Peak where you can find a nice comfy rock to sit on to activate next to one of the many stony paths.
There was a good breeze across the ridge so I set up my telescopic pole only about 3m off the ground ad I was hugging it while operating rather than trying to put out guy ropes etc. I called CQ on 70cm FM and got 3 in the log, 7 on 2m FM then set up the 6m antenna and called CQ after self spotting. After what seemed an age (it was only 4 minutes) Don @G0RQL came booming in to me followed by Framk @MW0OFA who was clear and audible but quite a weak signal until he realised he was only running 500mW 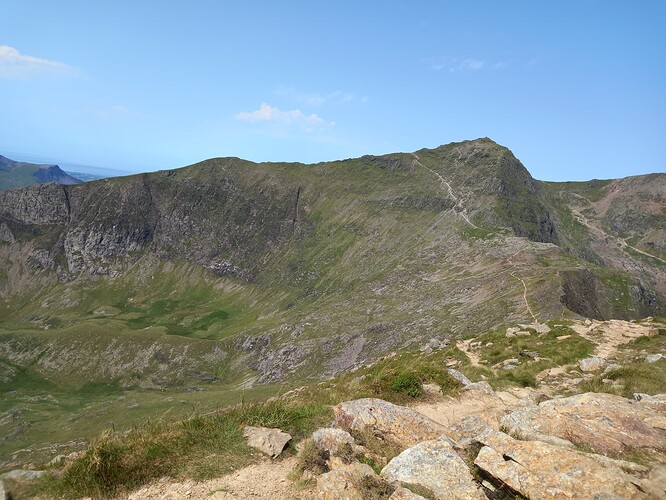 From my operating point i could clearly see the path down to Bwlch Ciliau and the climb up the Watkin Path to Snowdon and it looked manageable and I set off in that direction however the descent from the West Peak was quite steep and wasn’t going to be quick so after a time check I deceided to play it safe and head back down the way I came as I had to be back at Pen y Pass for 14:30 BST.

The descent was straightforward and helped by several other walkers up ahead marking out the route for me. Some of the drops around the East Peak and Lliwedd Bach were a challenge (it’s always easier going up) so resorted to the sliding down on my bum method rather than jumping and risking twisting an ankle or snapping a ligament in my knees. 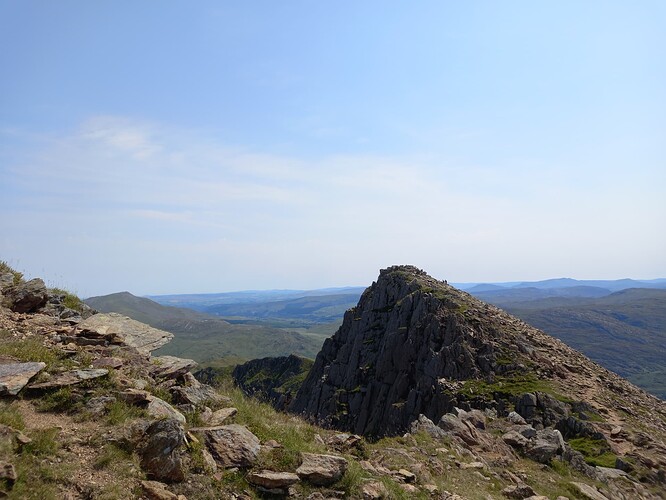 The descent down the cliffs was also a challenge - I knew I’d struggle to find the route I came up as there were such a multitude of paths so I chose what looked like the best route and it was reasonable until I came to a vertical bit of rock that required some bouldering to get down, and a 180 turn part way down to continue. Took some thought and time but it was OK and suprisingly no fear of dropping a couple of hundred metres into the lake below.
The rest of the descent was easy, so much so that I half ran down the stone steps to see if I could make the earlier bus back but alas I missed it by about 15 minutes. The walker I ran past said he had a first aid kit so not to worry if I fell so I told him to make sure he had his phone out to film it and get his £250 from You’ve Been Framed.

There was a 45 minute wait for the bus back at 14:30 BST which gave an opportunity to refill my water bottles and top up the one that was still part frozen. I was a bit nervous about the trip back because this was the penultimate bus that you can get home and I would’ve liked a bit more spare time just in case one ran late or was cancelled but in the end it was fine and all buses turned up and all connections made. I got off the bus outside the local pub around 17:00 BST which was perfect timing (the next bus gets you back around 19:30 BST).

Would I get the bus again? Probably not as I would prefer to have more time to do a longer walk or even drive to another summit or visit friends on the way back and 5 hours isn’t really enough time especially if you want to operate radio. In this case it was OK because it was a short walk which I might’ve bailed out of anyway and the journey was part of the adventure just to see if it could be done and it did save a load of money and was probably better for the environment.
The new T10 bus is a really useful link but it only runs every 2 hours which is a bit of a problem because this really restricts things. If it was hourly like the other buses then I could’ve had an extra hour and I would have been able to activate Snowdon on the same trip. The bus was a 12 month pilot which is due to end at the end of this month and I’m not sure whether it will continue - on the way out there were 2 of us on the bus, on the way back there were 3 and the driver didn’t like doing the route because it so sparsely used.

I remembered to take a measurement on the drop between the East and West Peaks - at the bwlch my Garmin said I had climbed 619m. When I reached the West Peak summit it still said 619m

Thanks for the report and the photos Pete. Sorry I missed you this time.

Thanks for your report and the photos Pete.

Great report and images @MW0PJE Pete, sorry I missed your log this time.