Red Screes G/LD-017, was my first ever SOTA summit, on 28th Dec 2016. I’ve always taken the ‘easy’ option of the 45 minute stone staircase from Kirkstone Pass, although this is a summit that can be included on linear routes and I really should make the effort sometime.

Now that I’m around 650 points in it makes sense to make use of the winter bonus booster where possible. The forecast today didn’t include the words ‘heavy rain’ or ‘upland gales’ which was enough for me.

Equipment today was the IC-705 on internal power and 5w RF on all bands, my friend Nigel’s M5TUE (foundation course buddy) QRP trapped end-fed for 20m, 30m and 40m, a guying kit and Decathlon 6m mast, Spectrum Communications SlimJ and tarp. As I ascended I ended up in the cloud and the tarp was essential as the mist turned to light rain now and again. 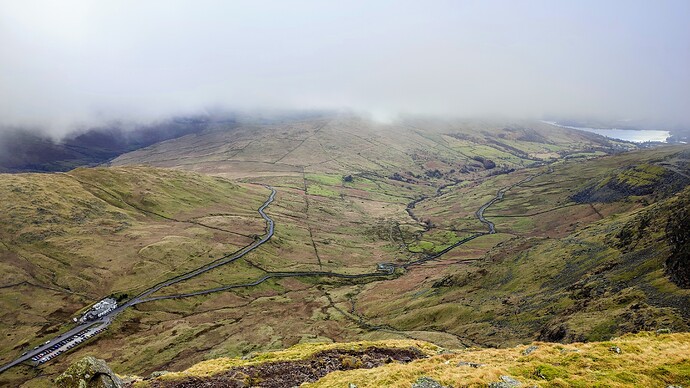 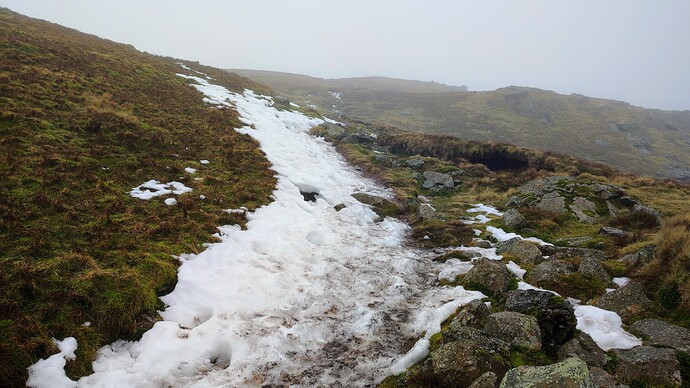 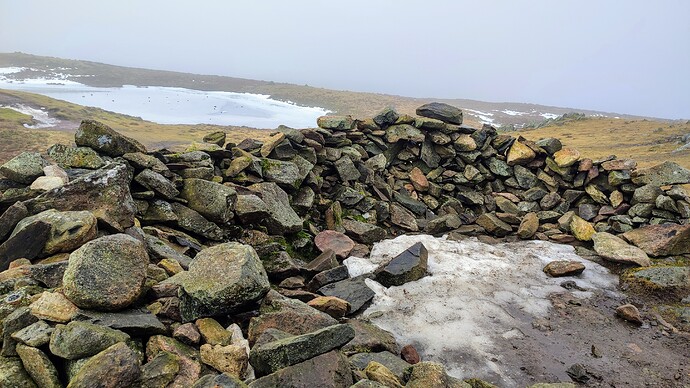 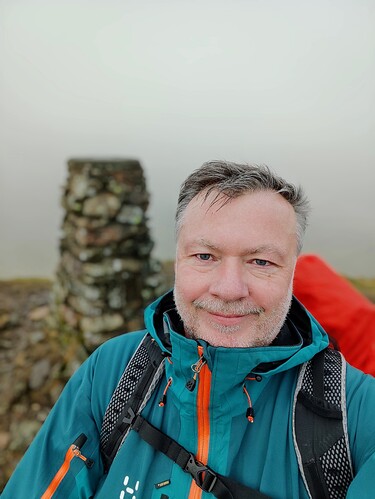 As I wanted to work Rick 2E0FRS who was on a VX3 running 1w in Lancaster I started with the SlimJ. I taped the mast to the walking pole keeping the tarp up, a configuration I’ve never tried before. By keeping the angle of the pole tilted into wind I managed to keep the strain on the tarp to a minimum. I then worked 2m FM and had a lot of nice contacts including Andy @G8CPZ who had arrived on Hutton Roof Crags G/LD-052 for a Lake District S2S and Mark in Leeds G7SXR a healthy 118km away.

Last caller was @M0TRI Andrew - sorry for not clicking on the callsign Andrew - my other Foundation Course buddy.

Moving to HF I relocated the 6m mast at the other end of the end-fed antenna. Originally I was going to point this downwind from the mast but because of a path in the way I ran the antenna parallel to the path approximately NE to SW. 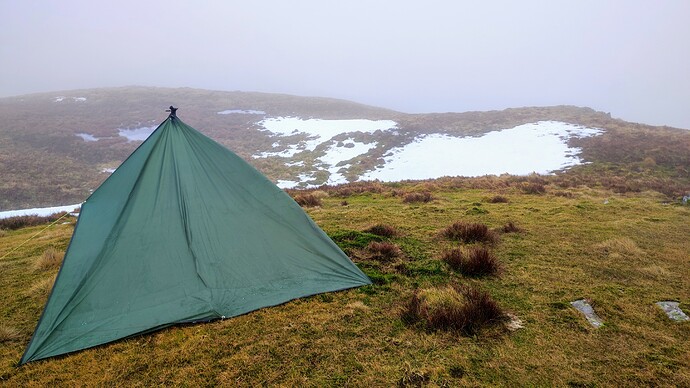 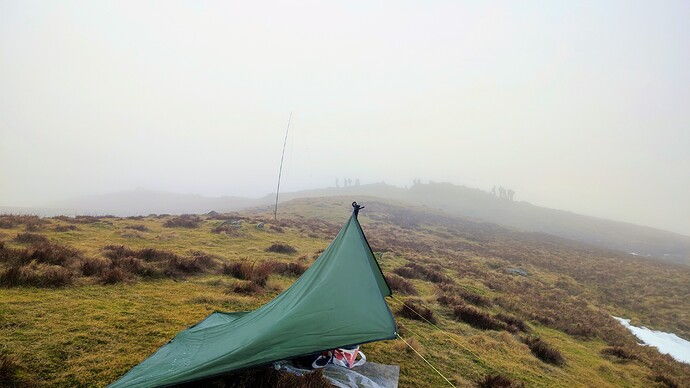 Starting on HF I found the SWR flickering a bit and I believe QSB was also affecting my QRP signal. Regardless I had a number of contacts including Chris very quick off the mark @F4WBN, @SQ9MDF Leszek and great to be chased by Guru @EA2IF.

I had packed the Palm Pico Paddles and even plucked up the courage to alert for 30m CW. In the end I didn’t have too much trouble apart from fixating on the odd wrong number and starting off badly assuming the first caller was F4WBN! After 30m I was still just about warm enough to brave a 40m CW activation to try and bring in some UK CW operators which worked a treat, thanks for all the QSOs and your patience with my copying. I did try and keep my sending with long enough gaps to suggest my copy speed to the chasers.

One last SSB S2S with @CT2GSN Joao who was nice and loud and an easy QSO to complete.

Just after Joao I found two mountain rescue guys standing at the front of the tarp. We had a nice long chat. I noticed on the way up that an exercise was in progress, apparently dog training. They had decided to ‘pop-up’, one of them in wellies! Once again the digital handhelds they use now didn’t seem particularly popular, but of course handhelds are only good line-of-sight for the most part. Mountain Rescue don’t have the luxury of only using their equipment on the tops of summits! 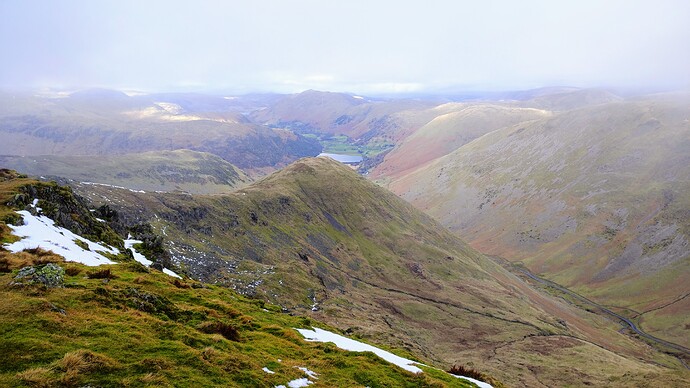 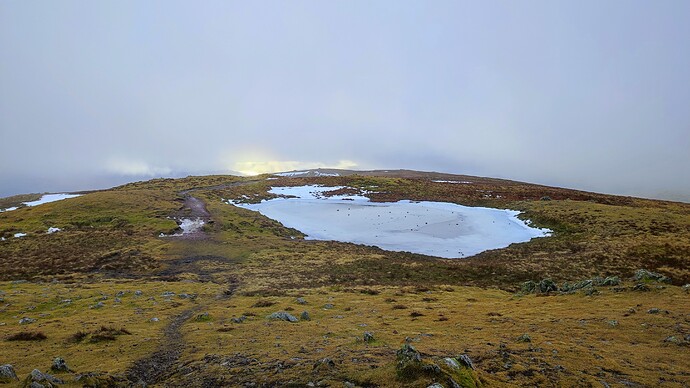 The descent was made much more interesting with the breaking cloud cover. 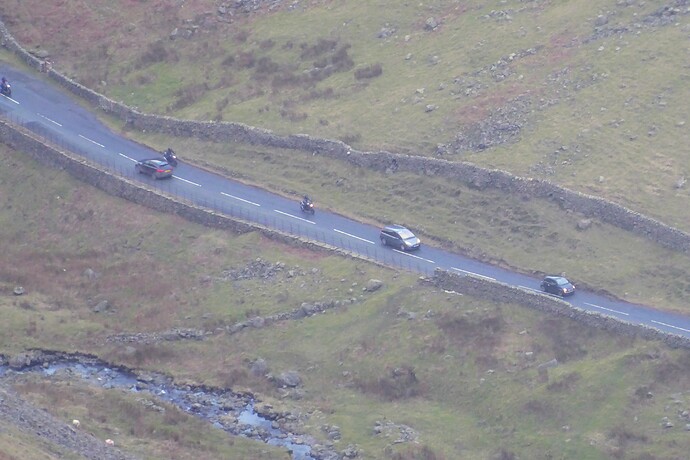 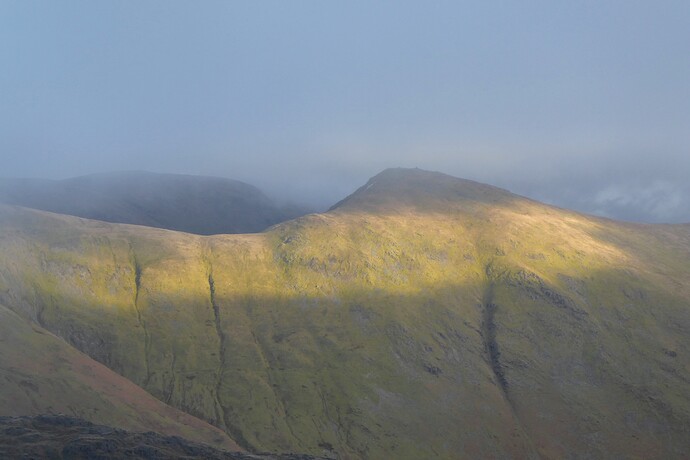 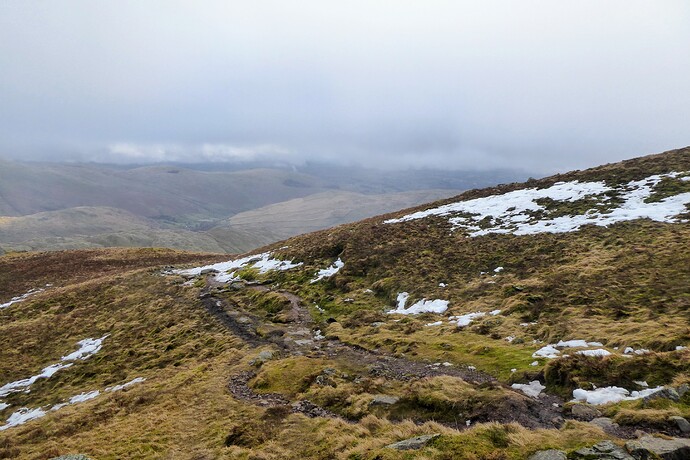 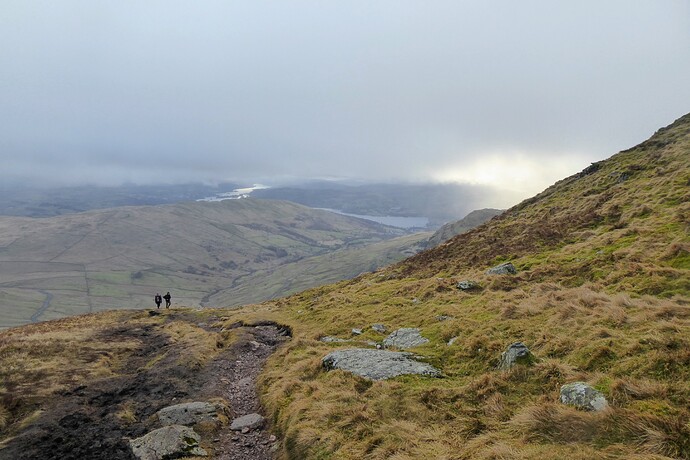 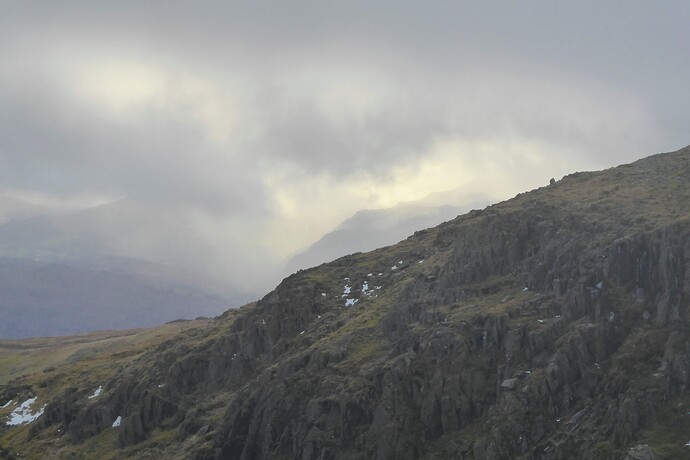 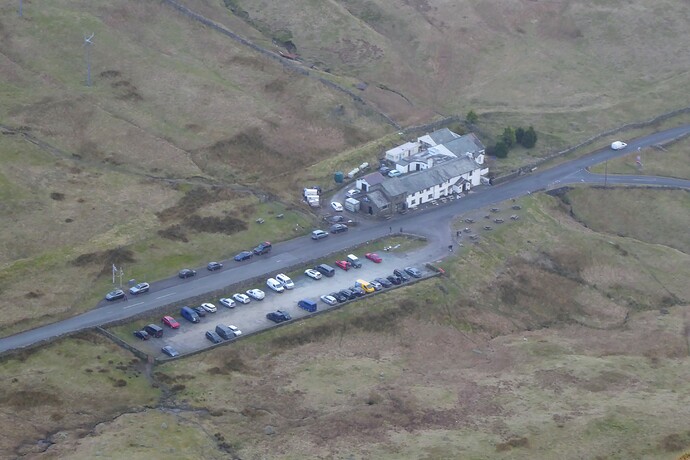 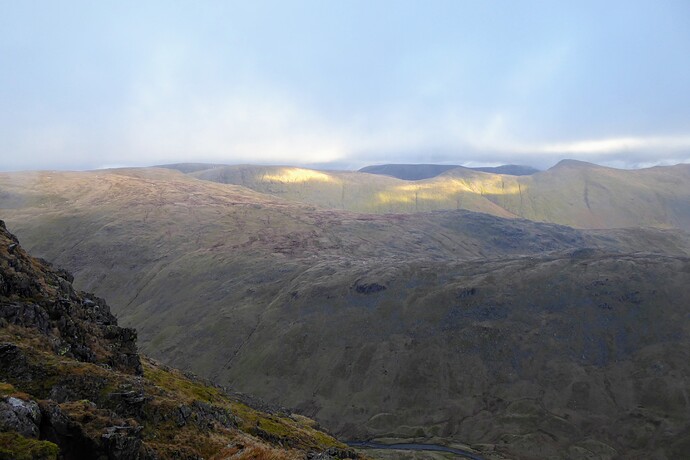 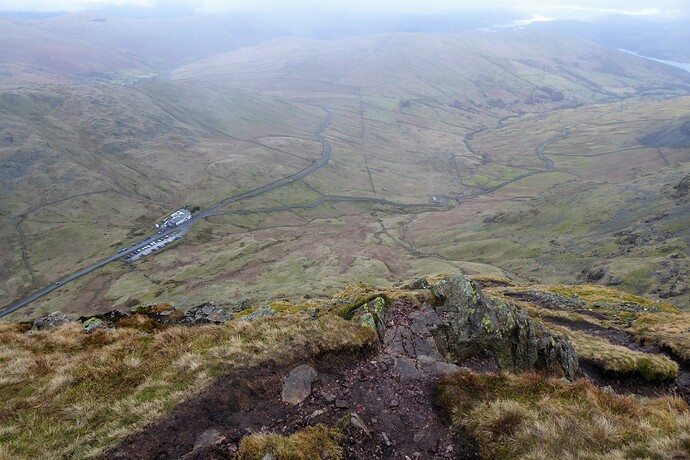 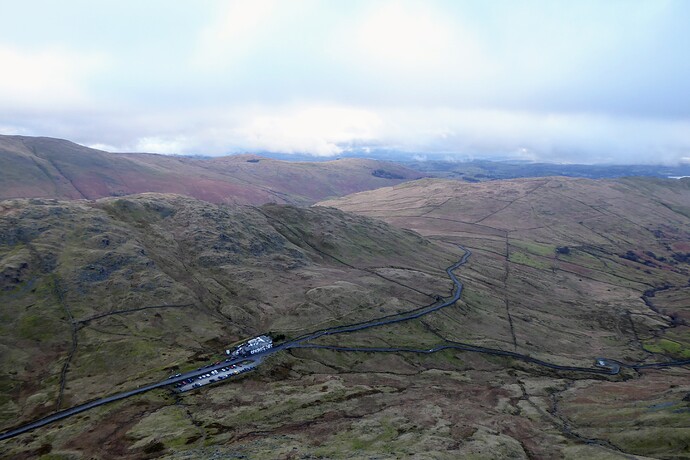 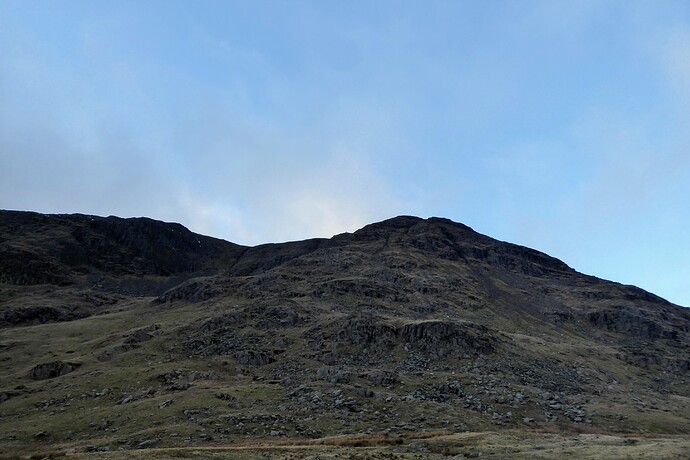 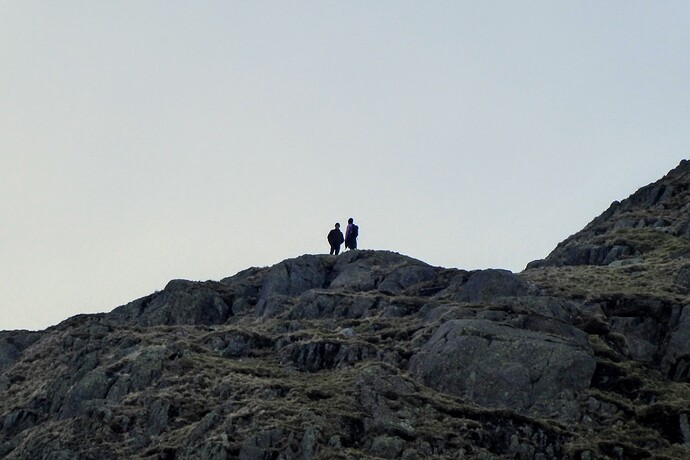 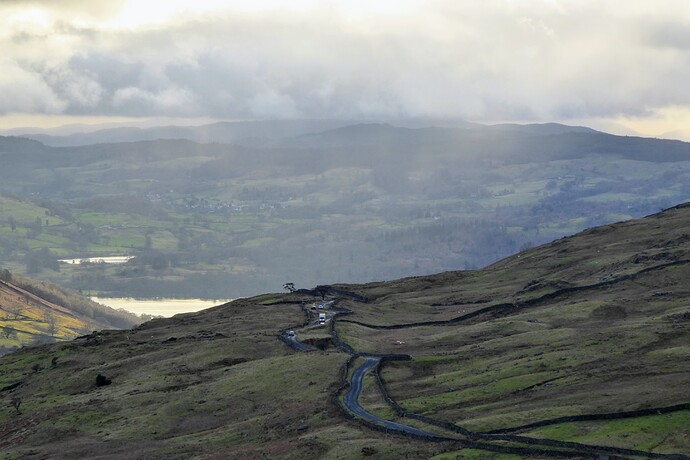 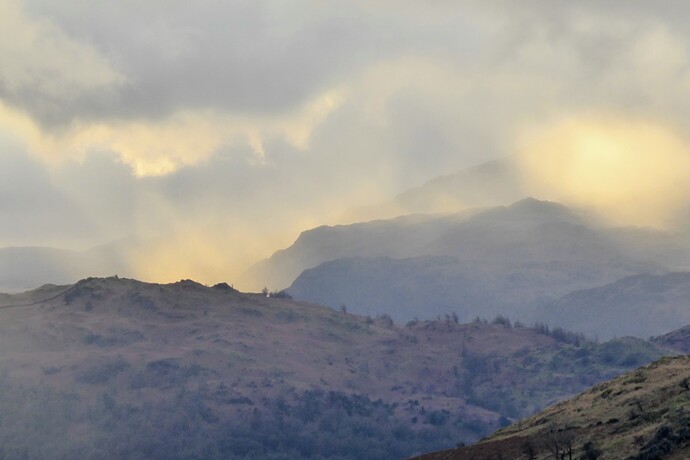 Really loving the IC-705 now. The recording facility is great and the quality of the recording is superb. It has also convinced me I was seriously overmodulating and in fact I think the Mic volume needs tweaking down again to around 15%.

Thanks to all the chasers. The ADIF Processor indicated I had valid callsigns which was a first for CW. Hopefully they are both valid and the right callsigns! Still fixating on wrong numbers, more practice needed. 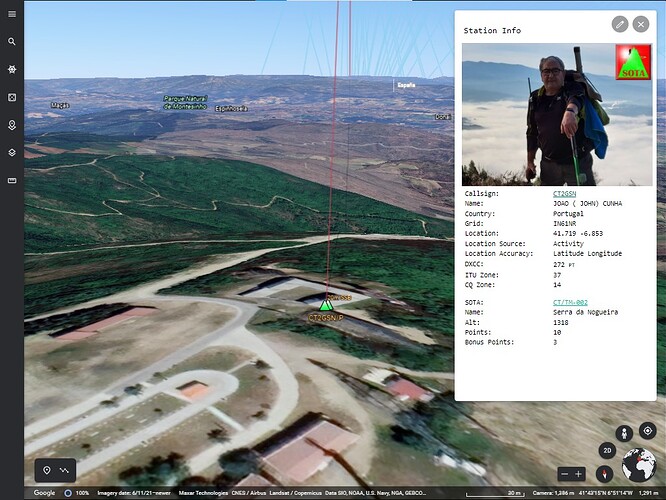 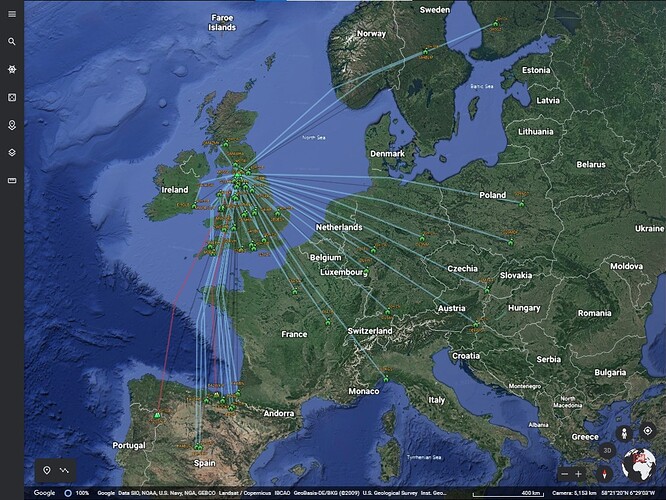 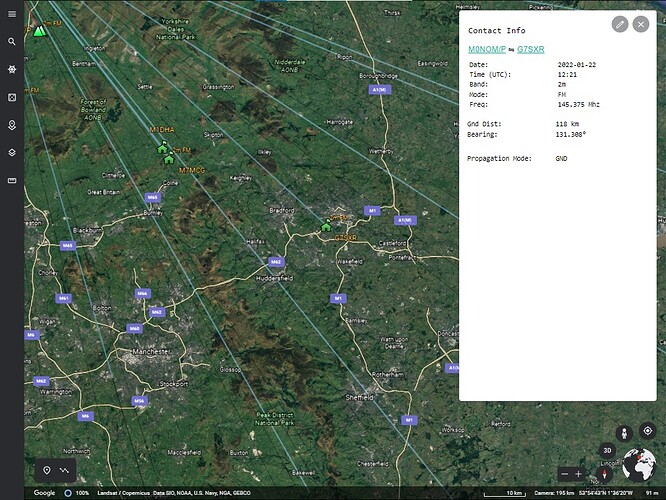 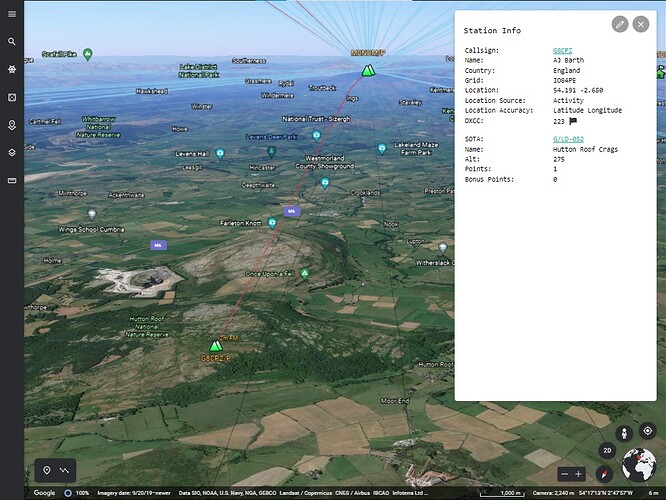 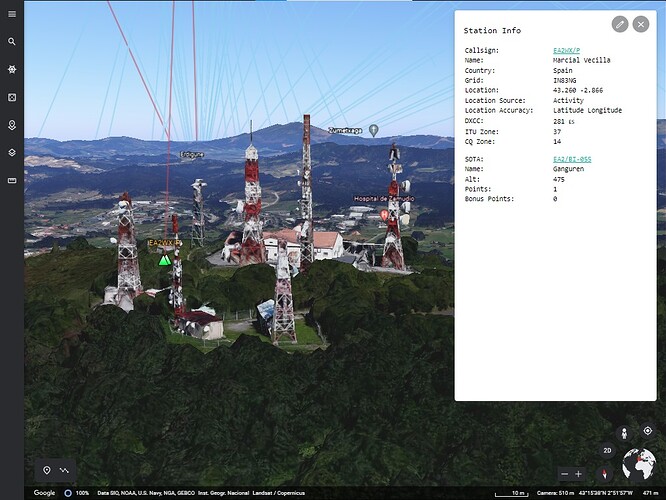 Thanks for the report and pictures Mark, you really took me along to the summit with you. I enjoy doing Red Screes and I’m sure I’ll get an activation in before the end of winter bonus.

I’m a little envious of activators going out into the hills whilst I’m stuck in isolation!

Thanks for the QSO and the report Mark. Red Screes is on my to-do list - and as I have more work to do ( only 417 points ) I will try - greek letters permitting - to activate this year. It would be another complete too - my total complete target for '22 being 50 it is - even by the end of January looking possible.
73 Paul

I listened for you on a couple of bands Mark; but nothing at all this time - propagation or the orientation of your wire? The wonders of radio

Great report there and good to get you ITL Mark

Hi Mark!
A remarkable result of excellent activation. As usual, I admire the photo. I’m sorry that my call sign is not on your list.
73
Vlad
RX9WT