Looking at the alerts, it looks very lonely tomorrow.
Can’t have all the chasers to myself surely 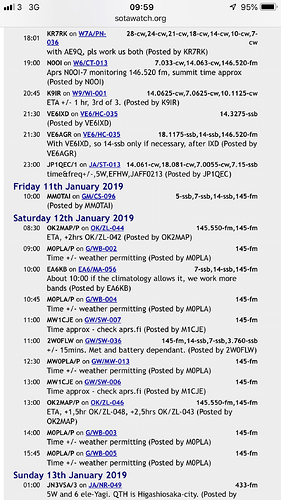 You will certainly be very popular …

HNY Andrew. Could be popular yes

Hopefully catch on the bands tomorrow

You may well be very popular.

60m has been working well for me over the last 8 weeks. Plenty of SOTA chasers, including some ground wave GM contacts, NVIS GM contacts, G contacts as far as the G0RQL in Devon and the odd OZ too. Nice and easy and a delight to fill up the log book. The biggest problem now is the band has lots of fixed stations prattling on for hours on end bogarting the frequencies. 40m is still generally long, the downside is the UK South Coast being as short as it gets most of the time. The upside of longer 40m contacts is that you get chased by the large number of very keen EA2 chasers which makes it very well worth while to go on the band still.

Possibly out myself tomorrow (legs & knees stiff from three days of curling) up Taynuilt way again? A couple of SS’s (down to last 24 - phew!).

60m was very busy last week when I was out. I spotted myself and could hear a few stations calling and waiting for me, but no-one could hear me call. Disaster. I had earlier that week been playing around with menu settings on the KX2 for my shine new headset. But all there seemed fine. Then I remembered, I had set the power to 0w.

Turned back up to 10w and we were away, 10 or so stations back to back, with a S2S witch jack at the end of my activation. There is plenty of trees to choose from at Mount Eagle, and got the dipole legs out horizontally, sometimes forget the length is enourmous But all of next week is looking very barren at the moment - there’s only me all week (Mon-Fri)!

Even I might have to cancel with the horrible weather we have here at the moment!

Check these two warnings out

Very high risk of avalanches in the northern alps Notices

Hello to all, just a quick note to let people in other parts of the world know why there is recently no sota-activity from hams located in the northern alps region (southern germany and austria). Since the beginning of 2019 it has been snowing almost continuously in the provinces of Vorarlberg/Tyrol/Salzburg/Upper Austria/Lower Austria/Styria … in some of these parts of Austria we now have very high avalanche risk which is the highest on the European avalanche risk table: [grafik] [grafik] T…


As Martin says don’t expect a lot of activations from our necks of the wood for a while - at least not on the higher scoring summits!

Stay safe out there folks.

Indeed something to take very seriously in order to avoid fatal accidents like the one happened last weekend to 3 Spanish 26 years old mountaineers and their guide from Peru after having summited a 5000m a.s.l. mountain in the Andes and had started their descent.
Just one Spanish guy out of 5 in the team survived the avalanche. 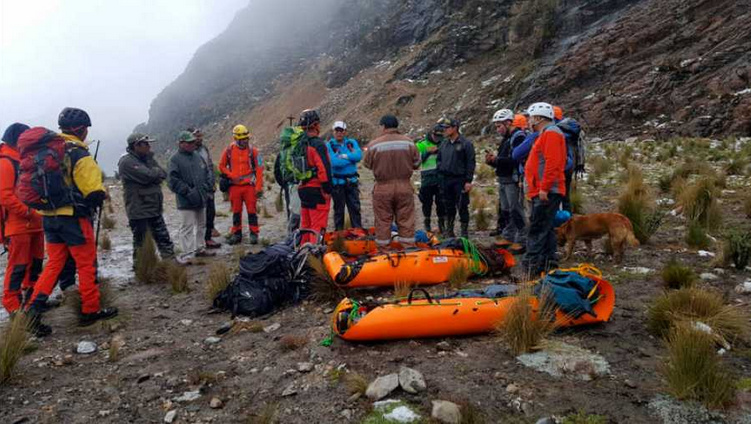