I have a confession to make: I’ve used an AlexLoop on my last four ski summit activations and each time I’ve made at least one mistake in setup and usage. Most of the time I’ve made multiple mistakes, and my signal has suffered from these mistakes every single time! Please don’t be me fellow AlexLoop users, read on. I’ve included links to some photos from my activations that show the wrong (and occasionally right) things to do.

Here is some information that I just received from Alex PY1AHD:

I have seen your beautyfull photos melting myself under a 41 degrees centigrades in Rio de Janeiro :))

I could notice that the top of your AlexLoop is a little twisted on the top.

I will recommend you to improve your AlexLoop irradiation balance to:

a) Keep the small top excited loop on the same plane with the outter coaxial cable loop and the tuning box.

b) After mounting procedures, hand mold the coax loop to be as a perfect circle as possible.

c) Certify yourself that the loop connecctors are firmlly atached to the tuning box.

This a and b recommendation needs only a simple visual check to be OK.

Eric, I would be more then happy with you can share this recommendations with the SOTA people.

Here are two more tips that Alex didn’t mention, the first one may not be that important (although he does mention it in one of his videos) but the second one definitely is:

The following photo shows Alex’s first recommendation - the smaller exciting loop and the tuning box are on the same side of vertical pole. However, the loop is a bit squished and I could have formed it into a better circle as per Alex’s second recommendation. Also, the coax is not running vertically all the way down the center pipe and probably should be: 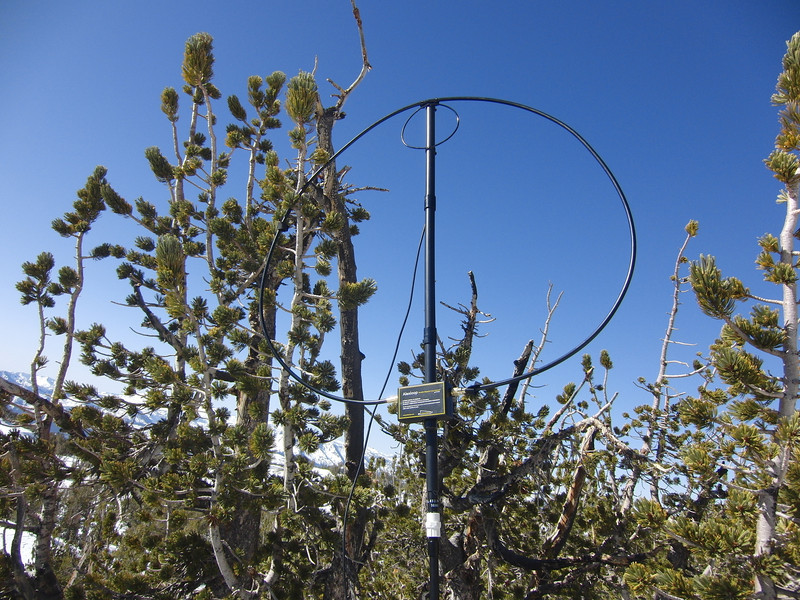 In this next photo, all appears to be correct if you intend to radiate your signal side to side instead of forward/back and straight down that lovely slope toward most of the chasers!:

However, looking at that same antenna from the side shows additional problems. I have the exciting loop on the opposite side of the vertical pole relative to the tuning box, and my loop has squiggly bends in it rather than having it all arranged nicely in a single plane:

Once again, the directions to and away from the camera in that photo (e.g., toward the summit in the background) are the directions of maximum radiation, which is clearly not where I wanted them to be. For even more clarity on that point, here is a web page with diagrams (thanks to Mike KD9KC for the link):

As Alex points out, a quick visual check will show you if things are right or wrong. There are several videos on YouTube regarding the AlexLoop, but I think this one showing a demonstration by Alex is the best for understanding the proper setup procedure:

I can’t wait to actually start using the loop correctly. I’ve been impressed with how well it has worked so far, and when I actually assemble it properly and point it in the right direction… I should be in for quite a treat!