Activations in Cornwall (May 2016)

Last Tuesday evening there was a Bromley & District ARS meeting that involved a few members setting things up to show to the folk who came along. I used the occasion to set up my SOTA portable station, and then checked the recently extended antenna to see how well the new 80 metres section tuned up. I decided it needed a bit of trimming, but it wasn’t too far out, and the KX3 coped just fine with it, at least well enough to get a reversebeacon.net spot from HB9.

On Wednesday evening I went to bed far too late, so I didn’t wake up anything like as early as I’d intended on Thursday morning. As I was nowhere near ready to leave by the time the regular Thursday morning GB2CW Morse practice broadcast started, I listened to the essential bits of it while having breakfast, and didn’t do too badly. I got on the road late enough to be well clear of the morning rush, and late enough for my sat-nav to decide a longer more motorway-intensive route would be better. The M25 had its sluggish sections, as usual. I found myself near a certain radio store about the time I needed a break, so dropped in for a coffee and to buy some items I’d forgotten to include on my last order. I stopped for a rather late snack lunch somewhere the far side of Swindon. The plan had been to activate the summit G/DC-005 “Christ Cross” near Exeter at about 4pm, but just as I reached the appropriate motorway turn-off the rain started pelting down, so I decided to skip that activation and head (via Plymouth, the Tamar Bridge, and Saltash) for the hotel in Liskeard. I met Colin G8TMV there. He’d managed to activate the summit G/DC-003 “Kit Hill” without getting seriously wet, though he didn’t get much of a view as the cloud base was lower than the summit. We had dinner in the tavern adjacent to the hotel and called it a night. 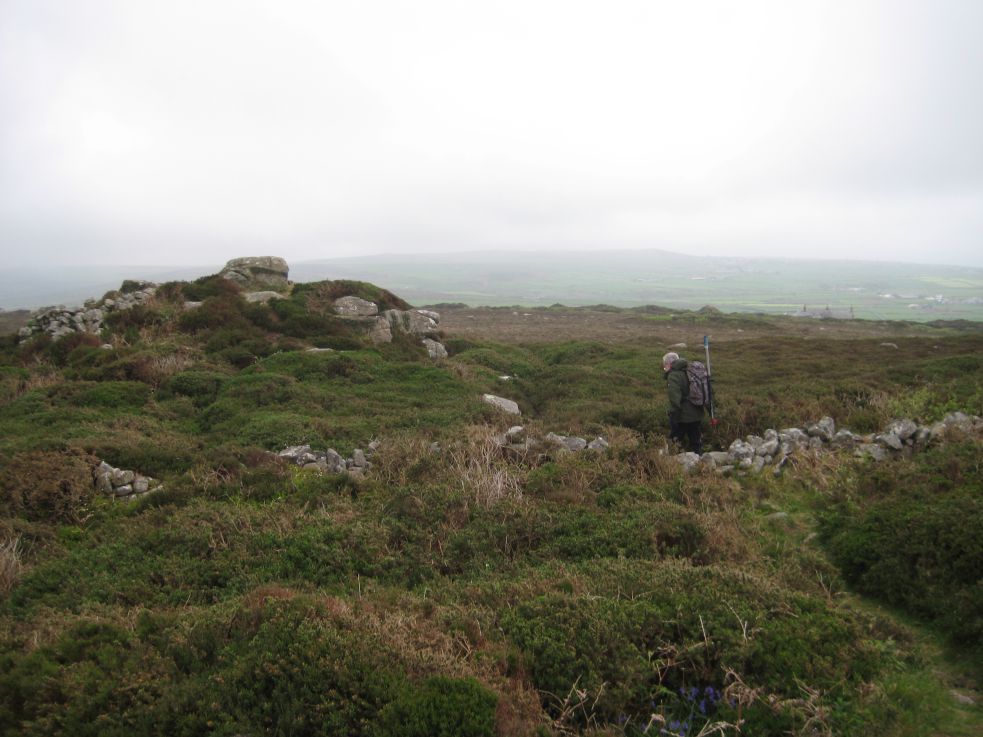 On Friday morning we headed west. Our first summit of the day was G/DC-007 “Watch Croft” down near Penzance. It was a reasonably gentle walk to the top, and an easy enough place to set up, but the propagation was not good, and though we managed to make the required contacts,it was a bit of a struggle. The next summit, G/DC-006 “Carnmenellis” near Camborne, was down some seriously narrow lanes. Having found a place from which to operate, we made a point of swapping operator frequently, and managed to qualify the summit a little more quickly and comprehensively. The wind was strong enough to cause the mast some trouble, though, so we didn’t stretch our luck. 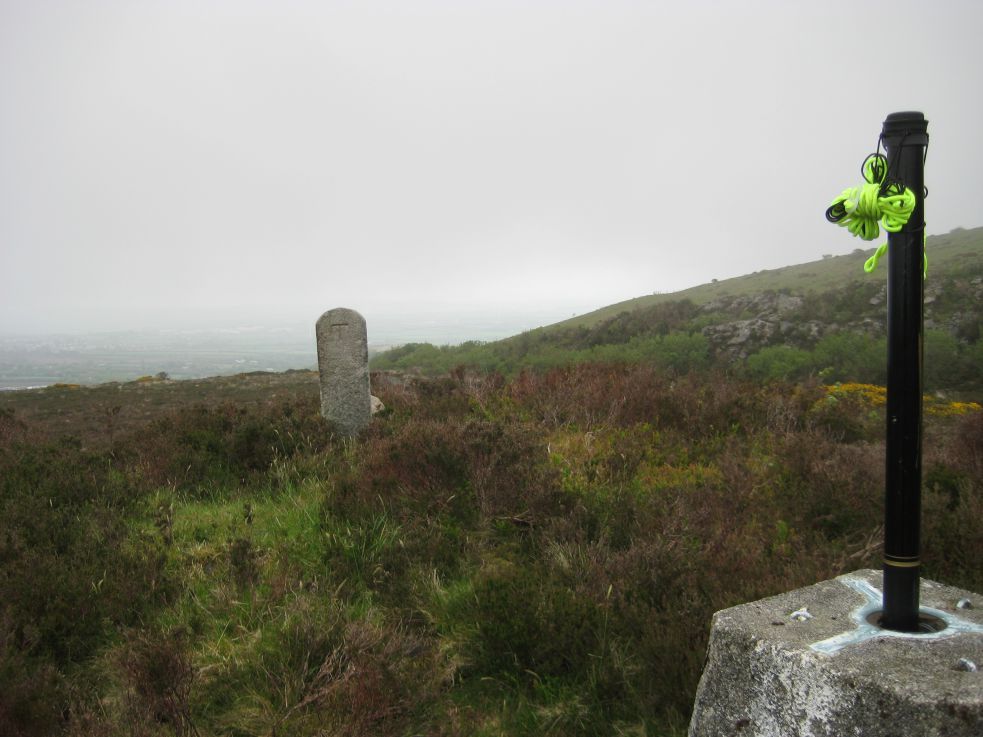 The final summit for the day was G/DC-004 “Hensbarrow Beacon”, noted mainly for being between a couple of vast (and much higher) spoil heaps. Here we had space for two stations, so Colin tackled 60 metres and I went for 40 metres. While we were operating it started to rain, and we both got a bit damp before day’s end. Back at the hotel we laid things out to dry and again had dinner in the tavern. 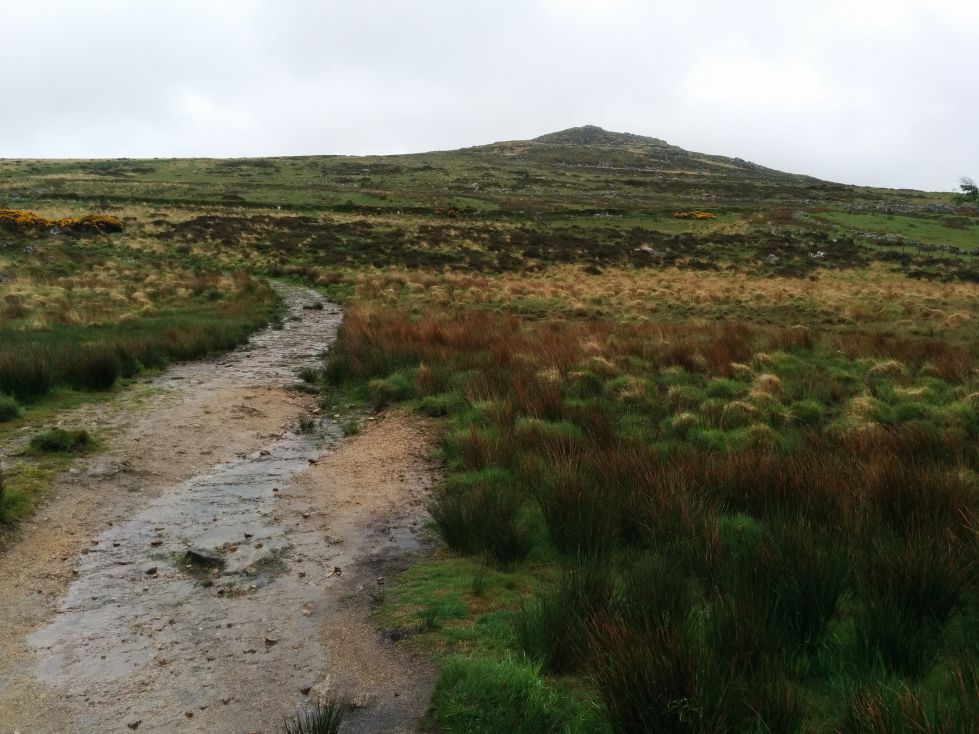 Saturday morning was rather wet. We abandoned radio plans, and instead hunted down a few local geocaches which didn’t involve us walking too far or getting too wet. The forecast for the afternoon promised that the rain would clear away, so we headed for the next summit on our list, G/DC-002 “Brown Willy” on Bodmin Moor. We parked at the Rough Tor car park, and set off. We’d not gone very far when the rain came back. The walk turned into a rather damp one, and the activation itself was a thoroughly wet affair. We did manage to make the required number of contacts, but logging them proved quite tricky in the rain. My write-in-the-rain log book was only accepting marks in pencil, and Colin’s plain paper log book will probably never look the same again. The rain eventually stopped when we were descending on our return, and I even had a chance to take a photo or two. Our drive home went down some narrow lanes with steep verges and lots of wild flowers, and we even saw some sunshine during it. 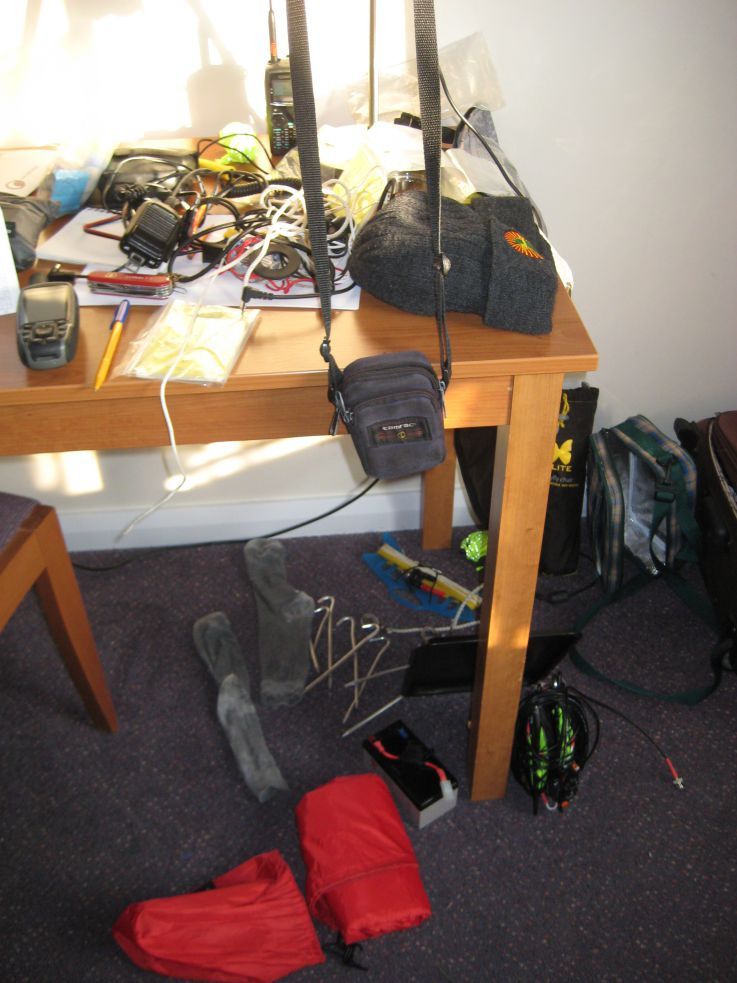 However, the drying-out exercise back at the hotel was rather more work than the previous evening’s, even with the air-con on full and the temperature turned up. 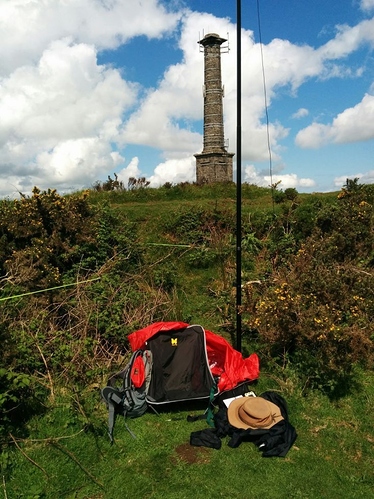 Sunday morning was fine. We packed, checked out, and I headed for G/DC-003 “Kit Hill” while Colin went to G/DC-005 “Christ Cross”. I spent about 20 minutes trying to make contacts on 80 metres without success, before switching to 60 metres. There I immediately made a contact, and then Colin called, for a summit-to-summit contact. I made a reasonable number of contacts on 60, 40, and 18 metres. After packing up my HF rig I added one more contact on 2 metres FM using my new hand-held radio. My drive home was long, but not unreasonably slow. I stopped near Exeter for a rather late lunch, and at Fleet for a suppertime snack. I was home by about 9:30pm.

It’s always a bummer when you head off for a bit SOTAing in more distant parts and the weather is pants. More so when the sky is not playing as well. At least you got out and activated something, my last trip was ended before it started by serious weather.

Good to see you using CW as you’ve put some effort into learning it.

My trip started a little earlier than Rick’s and involved a stop at Walbury Hill, G/SE-001 on Tuesday on my way for a couple of days spoiling my Grand daughter. This was an all CW activation using my MTR (dual band 60m and 40m) and 14 QSOs made their way into my log.

Wednesday saw me practising for SOTA by pushing a buggy around the Westonbirt arboretum for 4km. We saw lots of NOOASs (Naturally Occurring Organic Antenna Supports) while there but didn’t actually use them.

Thursday was the real start of the SOTA trip, the plan had been to try and activate all G/DC summits but the weather forecast made it look unlikely. I initially aimed for Kit Hill and taking a leaf from Tom’s book stopped at a nearby Pub for some warming Tomato soup! Once on the summit there was no view, apart from the inside of the cloud. I waited a while and the rain slowed down enough that I managed to put up the inverted V dipole and operated on 60m SSB for long enough to make 11 QSOs. From there it was a shortish trip to Liskeard and the hotel where I met up with Rick as planned.

Rick has already detailed our Friday and Saturday activations, except that he vastly understated the wetness of the walk up Brown Willy on Saturday. Thank goodness for Hotel air-con that proved excellent at drying out saturated kit.

Sunday was a fairly leisurely start, I made my way to Christ Cross G/DC-005 and set up in the corner of the field, it was just as muddy as described. I started on 60m and the first thing heard upon turning on the radio was Rick so we had a S2S and he then kindly QSY’d down leaving me the frequency. I reciprocated by telling everyone I worked where he was. Chasers dried up after 20 contacts and I was just contemplating a move to 40m when the rain started again so I packed up instead.

There followed a long and rather boring drive up the M5, the M4, the M25 and the M11 to the home QTH and a well earned take away dinner and an early night.

So 7 SOTA points and a total distance driven of over 800 miles.

[quote=“MM0FMF, post:2, topic:13249”]Good to see you using CW[/quote]Thanks. SOTA activations are, for me, probably the least stressful time to be using CW. Chasers do slow down, and repeat things, and keep the exchanges short, in a way that doesn’t happen in the more general DX theatre. It makes working through the callers much easier.

[quote=“G8TMV, post:3, topic:13249”]vastly understated the wetness[/quote]Remember, I’ve just come home from a month in Kenya during the Long Rains. The rain we met on Brown Willy wasn’t much more than a slightly heavy shower by comparison.