Another week, another activation. This one had to be a quick stop due to a schedule we wanted to keep. The NEARFest hamfest in Deerfield, NH was having a door prize drawing, and since we had entered the day before when we’d attended, we wanted to be there for the Big Drawing for the KX2 rig. You-Must-Be-Present-To-Win, so present we were! (we did not win, alas). With that being the constraint, it was an early activation on a mountain about 40 minutes away from the hamfest. As far as timing went, it was a grand success.

Blue Job Mountain is part of a State park, and is thick with blueberries, hence the name. We saw the blueberry plants, but the season is well gone so not a blueberry in sight. It’s certainly one to do earlier in the season next year for that aspect alone. A beautiful and well marked wooded trail, with a few steep spots, but still easy enough to be a family favorite. Lots of young couples with the kiddies in tow, so we had a lot of questions to answer about the activation. The kids liked the comparison of Morse code to “doing texting by hand”.

On the way up, we took a seat on a handy rock and I had a nagging feeling I was being watched. Normal procedure is to check right at the limits of vision, but nothing seen there. A sudden gestalt! It was a tree about 5 feet in front of me that was watching me! 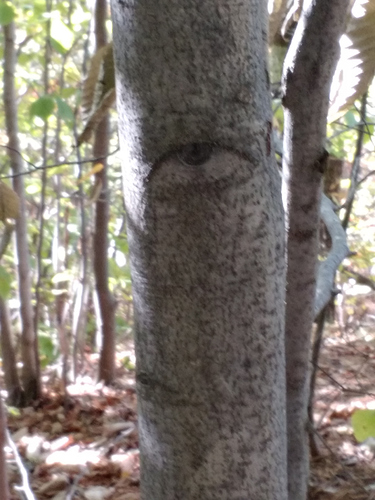 We decided to set up the operating position at the top of the fire tower and flung out the end fed antenna into a neighboring tree. It was still early, 20 meters was a graveyard, so went to 40 where there was some action. The band seemed to be in rough shape, however, possibly lingering effects of the recent geomagnetic storm. That didn’t keep a handful of QSOs from getting made, but it was obvious that it wasn’t going to be one of those days where you have to wade through pileups.

The view from the top of the tower was superb, as you can see for yourself. 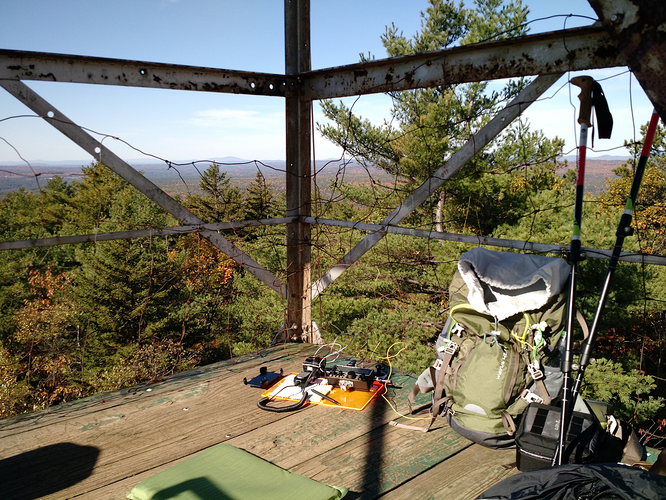 Closed up shop in time to get back to the hamfest for some coffee, a final walk around, and the Big Drawing. The grand prize went to a deserving looking fellow, who I hope will take it out to the summits himself.

A good activation and a summit that goes on the list of activations for next year, for sure.