The forecast was for wall to wall blue sky and sun. I didn’t see the forecast saying it would be as windy as it was but blue sky, yum yum. The downside was a heavy over night frost from the clear sky. -0.5C when I got up, I left the car warming up to defrost the windows with the seat and steering wheel heater running. I had picked The Wiss GM/SS-122 and Turner Cleuch Law GM/SS-140. I didn’t want to go North as there had been much more snow. You can park between them and do one then the other. Or park at one, do one, walk to the next and do a longer loop back. Or do what I planned, do one and drive to the next and do that

They’re only about 60miles away as well.

The drive was OK as far as the Mount Benger Road. This is a narrow B road rising to 350m ASL. It had been treated but there were plenty of patches where the water running of the hills had frozen across the road. And lots of hydraulic pumping had made some massive potholes. Anyway, it was exciting in a few places. Then back on to an A road out to the car park at the Tibbie Shiels Inn. Or one across the road. German cars only it seemed. 3x A4 estate, 1x A6 estate 1x 3 series estate, 2x CL Mercs and 2x VW Californian campervans: getting on for £350k of cars, madness! Boots on and over the road to the Southern Upland Way long distance path. It was not too cold but the wind was brisk.

The Tibbie Shiels Inn was closed and looked a bit sad. Not sure if it was closed for Winter + lockdown or if it’s now closed for good. There’s newish phone mast which was on EE and so all day I got a blisteringly good signal and internet speed. From here it’s follow the path and at the second hairpin, left of the track and up the hill. Quickly there was a strong smell of “cattle’s business”. The ground was frozen and white but turned frozen and brown as I climbed. I did think of doing a U-turn but I could see the cattle feeder, the cattle and that there was about 200m of frozen brown. Right at the end of this the sun was starting to melt the frozen brown to be more runny and smellier. Luckily I was past it and climbed quickly.

30mins of climbing and this is the view to White Coombe GM/SS-030, the third tallest summit South of the Forth. Yes, that is tussock grass. 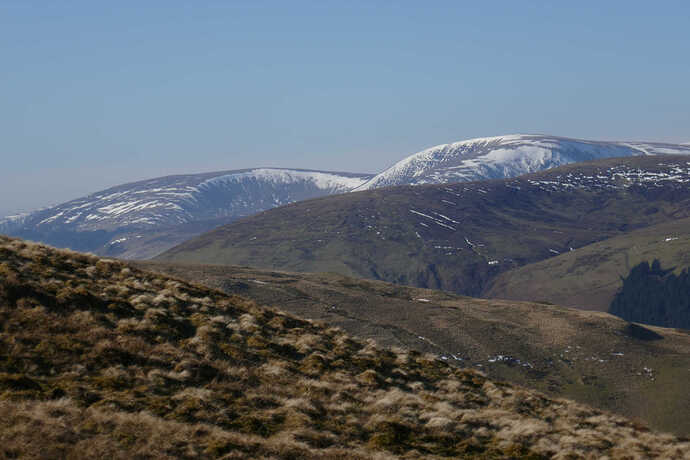 Similarly the view back over St. Mary’s Loch, The Tibbie Shiels Inn, the EE mast and Broad Law GM/SS-029, the second tallest summit. Broad Law is the hill at the far left. 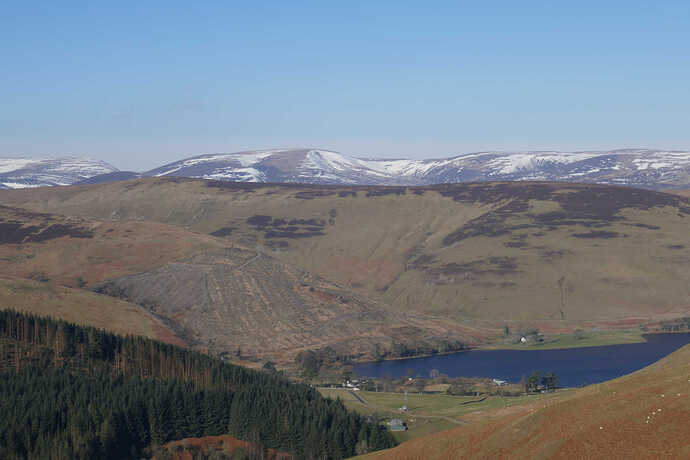 A zoom onto storm damage. Which one? Who knows but there are millions of trees down in Scotland and they need to be recovered quickly or they will rot. Harvesting underway but you can see how many broken trunks there are. 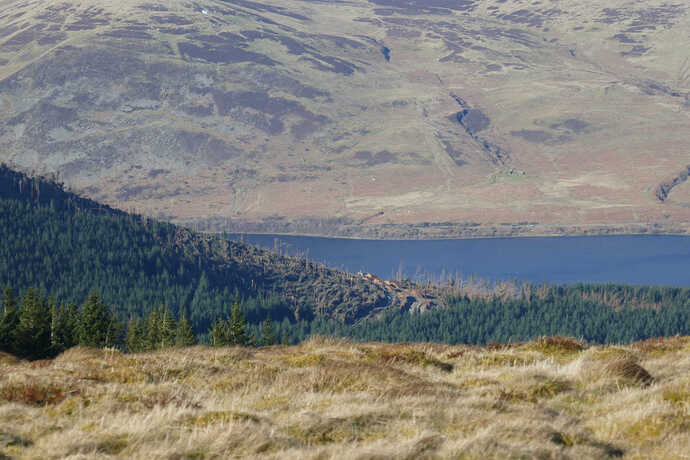 Getting near the summit. Except Houston, we’ve had a problem. I’ve done this a few times and the quickest route is up the left ridge over worse ground. The right ridge, by the woods is quite boggy. Hrumph!. Ok, look at that sky

Wasn’t tjinking and I went too far up the track before turning off. 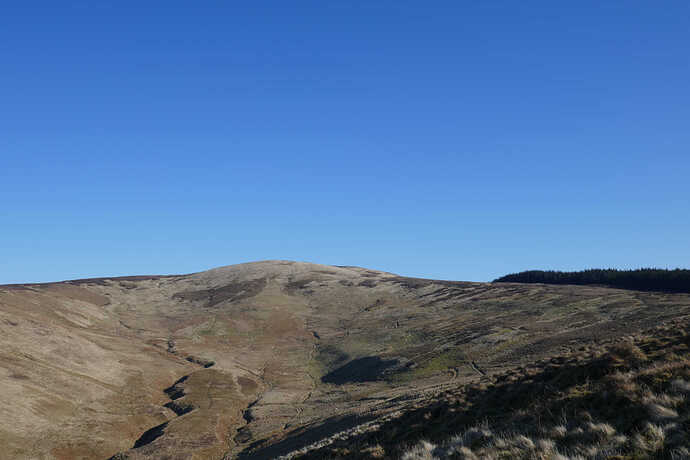 The boggy ground by the forest was fine as it was frozen. Once past the trees it was melting and a little squishy. The wind was significant by now. From the top point in that photo it’s about 10mins to the trig point and the summit.

I’d forgotten just how open it is up here. Very open and the wind was howling. There was a newish looking fence so that was pressed into mast support. The Inv-V dipole pointing NW-SE which is sort of OK for EU and NA. I setup and hunkered down as best I could. During the activation the wind and gusts got stronger and stronger. I was glad I had my Down jacket and the wind was from the South so wasn’t too cold. But the windchill took the temp to below 0C. There were two problems during the activation, the mast bending alarmingly in the wind and the wind drowning out the 817’s loud speaker.

First band was 30m and it was nicely busy, 26 QSOs in 35mins including a few short skip QSOs to Southern England. After that it was onto 40m. I heard activity on the WAB net so started on there. There was no net control so things were a bit iffy at times but 16 QSOs in 16mins. Then it became a zoo and I cannot be bothered with that any more. Down onto 60m and 6 leisurely QSOs took me to nearly 1300. After that I opened the 60-40m link and fitted the “danglers” to the ends of the 40m dipole. These are about 20cms long and bring the resonance down from 21.6MHz to 21.1MHz and it was on to 15m.

Without much effort Rich N4EX was there. OK much QSB and only 41/34 reports but that is the first QRP SSB across the pond QSO in sometime. OH3GZ was 56-59. SV3IEG was very QSB but ended up peaking 59. Last SSB QSO was LZ2OQ/1. OK qualified on 15m will do for me. I switched to CW and worked LZ2OQ/1 again and after a bit of calling and calling because I knew someone was there, K4MF 539/559 when the QSB allowed him.

By now I was exhausted from the wind gusts and had had enough. I thought about 20/17m but the pole was bending alarmingly so I packed up. Disaster… a lens had fallen out of my sunglasses. I’ve had them 27 years so this was bad. I carefully packed everything ready to put in the bag and emptied the bag but no sign of the missing lens. After packing up I spent 20mins scouring the heather. Nothing. I’m most annoyed. I only wear them for SOTA as my normal varifocals have reactive lenses. Boo 27 years

Having lost a lens and the wind getting stronger I decided to give SS-140 a miss this time.

Summit trig point looking just South of East. The wooded hill on the left is Turner Cleuch Law GM/SS-140. I spent time during the setup to make sure the firebreaks still looked navigable. There didn’t appear to be any storm damage. I’d never considered was a belting microwave operating position this is. The take off down towards Newcastle and the NE is really splendid. 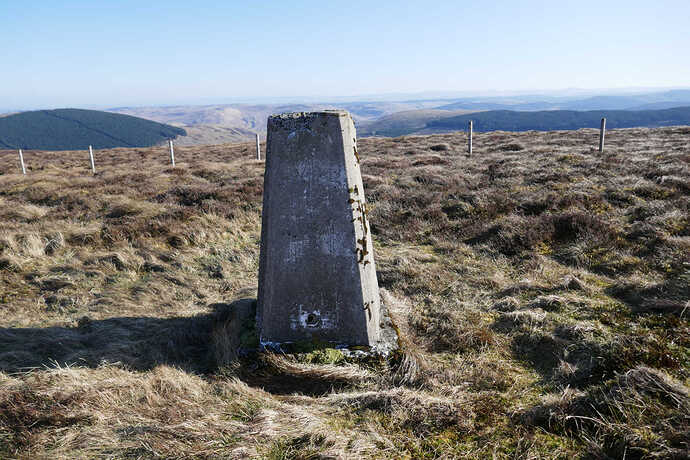 Whilst here a young lady walked up. We were surprised to find someone else on “our” hill.

You can see her in these panoramas.

Descent was the what should have been the ascent route. Boy did that wind buffet me on the way down. It was another double fleece job too. Taking the correct ridge I remembered the miserable ground, heather, boggy bits and tussocks. At least it looked nice

Looking back up after about 10mins from leaving the trig point. 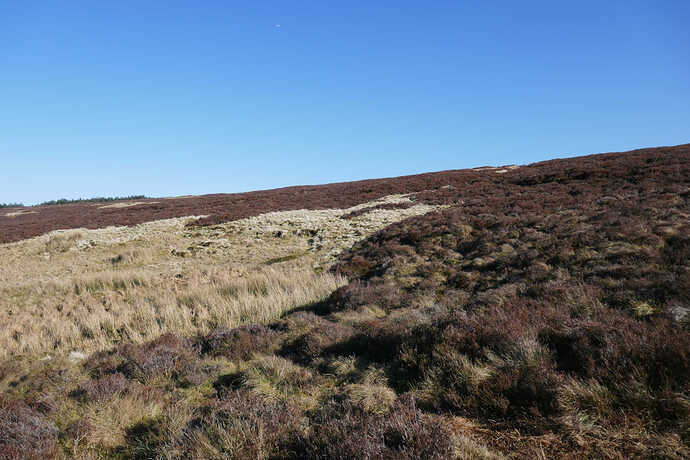 And looking down, miserable ground. 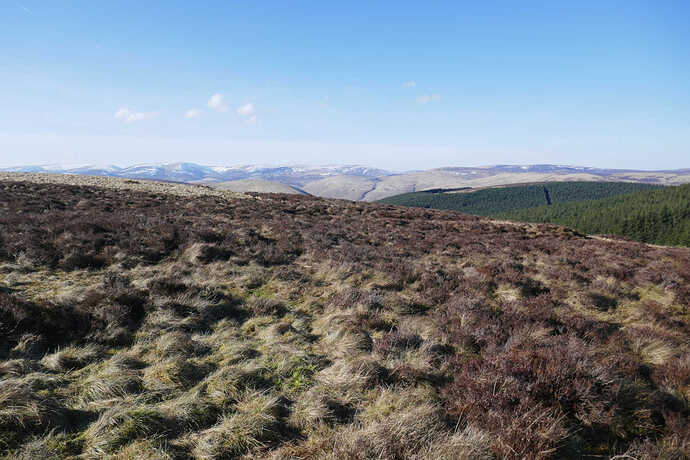 I made sure I avoided the cattle feeder and looking at it, the frozen brown had melted and was now runny brown. You can almost smell it in this photo! 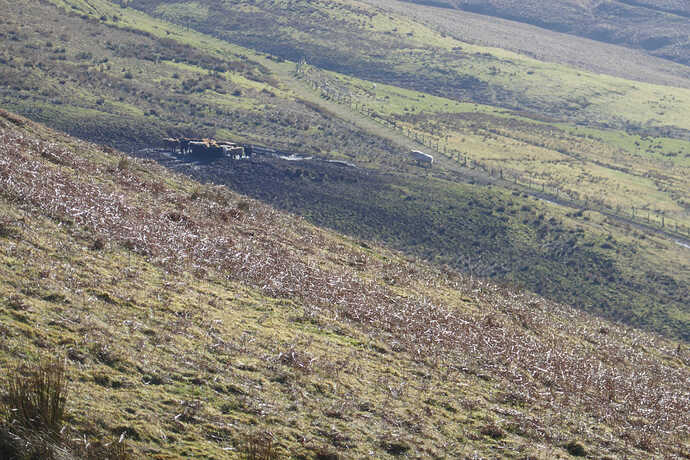 1hr20 or so car park to summit. 1hr back. Loads of QSOs on 30m/40m, enough to qualify on 60m and 15m. It’s nice to see just how well the 40m dipole works as a 3/2 dipole. It wont have a perfect pattern but it was good enough for 2 NA QSOs on QRP and that will do to start with. I’m annoyed about those sunglasses.