I activated two summits on this weekend’s expedition to the Great White North of Wisconsin: Blue Mounds (W9/WI-010) and Gibralter Rock (W9/WI-037). These are my third and fourth SOTA activations, and my first two done at QRP levels.

Ironically, Blue Mounds is rated at 6pts and includes a winter bonus but was by far the easier of the two activations. The biggest issue with getting to Blue Mounds’s AZ during the winter is the 10+% grade snow-covered road that leads up the last km or so. The AZ includes a bunch of picnic benches etc, so there are plenty of place to operate in relative comfort. Well, comfort if it’s not 20f and blowing at a consistent 15kn.

Allison and I set up the station quickly, and I worked a total of 6 people split between 20m and 40m. I called a couple of times on 80m and got no response. The highlight of the activation was my first S2S with K7DTLC who was on W7W/WE-037 in Washington. His signals were amongst the strongest of the activation, proving (I think) the power of the mountains.

I believe I earned the Blue Mounds winter bonus and then some the next day on Gibralter Rock, a 2pt hill. Overnight it snowed 6”+ and the morning temp was 5f with a stiff breeze. My friend Steve and I set out undaunted. Steve is a fabulous photographer, and packed several cameras including a 4x5” large format (i.e. glass plates!) rig. I am really kicking myself for not getting a pic of his setup on the hill.

The drive to the trailhead took twice as long as usual given the treacherous roads. The hike to the summit, a little over a mile, was gorgeous, as were the views from the top. A light snow fell as we climbed up and during most of the activation. The sun came out brilliantly for the hike back down.

I ended up with 16 contacts across 20, 40, and 80 meters. Somehow I managed to miss-spot myself twice. I blame cold fingers and brain.

I had the pleasure of hearing several callsigns I recognized from here on the reflector. 80m netted me a contact from KD0YOB who activated the hill before me, and a nice chat with WA9STI, Scott, a friend I made soon after my first post here. All in all, it was a very satisfying bit of playing radio on a hill.

Details: Verizon cell/data coverage was good on both refs. For a winter activation of Gibralter, we opted for the western trailhead. This route has almost none of the bare rock/ice that you have to cover coming from the east trailhead.

On the way up Gibralter 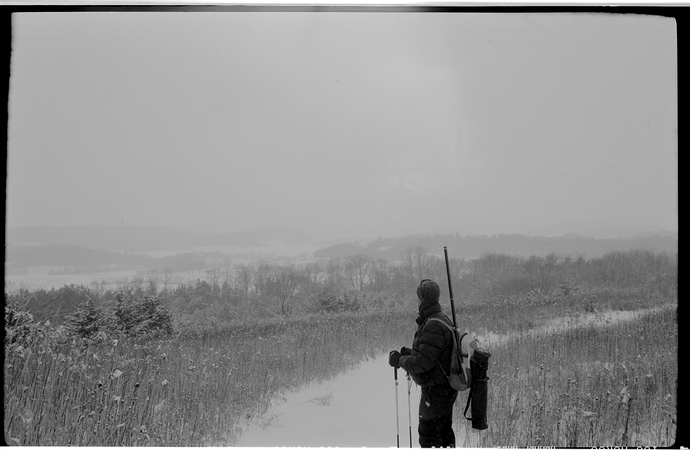 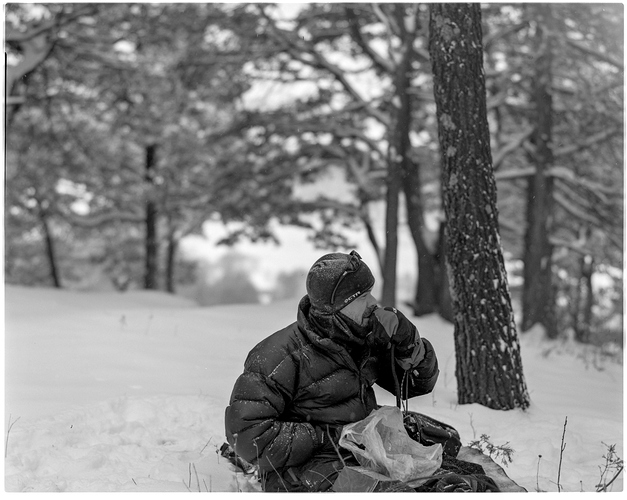 Blue skies on the way down 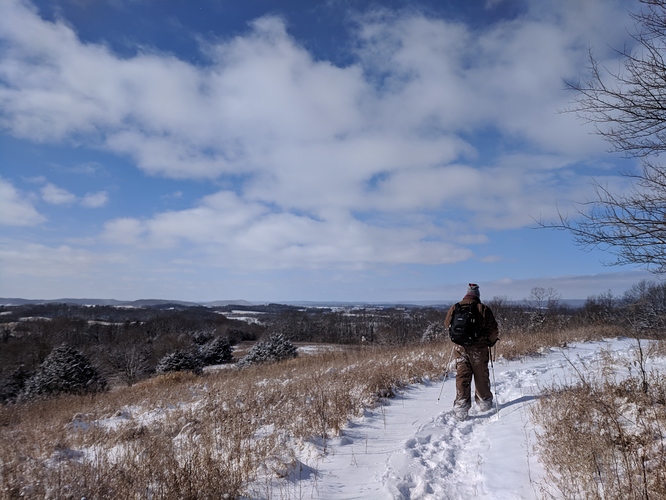 Joe,
Thanks for using 80 meters! When I did Gibraltar last Wednesday, it was in the 30s, so I guess that makes me a fair weather activator. I started from the north lot, and walked up the service road, which was very icy.
Nice pictures, you should travel with a professional photographer all the time!
73,
Peter KD0YOB

started from the north lot, and walked up the service road, which was very icy

That’s exactly what we were trying to avoid. We got a taste of it as the short approach road to the trailhead was iced and then snowed upon. It took some creative driving to make it into the lot.

Good to talk with you! You were my first SOTA contact on 80m. I like being able to talk to people who are relatively close to the summit, so I’ll try 80 whenever I can get all 58’ of wire in the air.

Sorry I missed you this weekend. I worked Joe on Wed, and would have loved to work you too. Same summit in two different activations in a week in the winter. Cool!

Yeah you should have seen the 4x5" setup in the snow. If anyone would have happened along, they would have been utterly mystified for sure. One guy with a large 75 year old camera on a big tripod. Another guy with a radio sitting in the snow. A crappie pole strapped to a tree holding up a wire…

I have some vacation days I need to burn so in the next month I may do some day trips up there to do a few of the others that have winter bonuses. The bands have been so bad recently, but the winter is wearing away (we can hope!)

Such details provide lasting souvenirs of your activiation - you’ll enjoy them even years later! They make your SOTA personal and living. You’ll do things you would not have done without SOTA.