After a fashion, I finally managed to get the FT-817ND to transmit on 5MHz. This with the very much appreciated assistance of Mark G0VOF, who supplied the info and to Mike, G4VSS, who completed the surgery. Tuesday past saw time to cut a dipole for 60m and finally get it all tested out - success at last and now time for a summit. Being Remembrance Sunday, an early departure was out of the question. Having served my time, an 1130 departure was planned ensuring a moment to myself at the 11th hour. Jill, M6JBZ and the two boys, Daniel and Ben were coming along too. The company is great but the time on the summit is usually limited - it was also necessary to pick a less demanding target, lest I should suffer from ‘SOTA strike’ yet again!! Mynydd-y-briw GW/NW-060 looked a sound choice.
Good progress was made in light traffic from the home QTH at South Warrington. We turned off the main road, following the SATNAV, toward the target. It did the usual thing and took us where no man had been before!!! We ended up on a titchy road with the wheels up to the axles going down a slippery and muddy hill. As we descended t’was obvious that there needed to be a decent road at the bottom or we were stuck - there was no way we were going to get back up this hill. At this stage Jill reminded me about the sign which stated ‘not suitable for motor vehicles’. In order to save a few bob on the fuel I had elected to leave the Land Rover at home, and take the Citroen C3, in which I had left my glasses - doh!

Anyway, soon after I could see the mast on the summit top ahead. I stopped momentarily to work M6MMM/P on G/SP-004 and to arrange a S2S a short time later.
An easy ascent up the tarmac path took us up toward the mast. A short time later the sun had come out and the dipole for 2m had been erected on the grassy, trigless summit. I worked Mike (M6MMM/P) again for the S2S from the Shining Tor and promptly handed the microphone to the Station Manager who also commenced her activation. This proved to be really hard work on 2m for a Sunday afternoon. We managed to work the 4 stations required over 20 minutes & Mike again, on his other call sign. Thanks also to MW6RBH Richard, G6LLX/P Keith, and G7HVF Stuart without whom we would have been beaten.

It was time for 5MHz now as Jill and the boys gave me a hand to erect the dipole. I was delighted to hear G0VOF, Mark, reply to my CQ call and be the first in my SOTA log on 60m. He put a spot on for me and I was very surprised at the resulting pile up with 11 QSOs in almost as many minutes. Mark came back to wish me well and agreed to spot me on 30m. I knew Andy MM0MMF was around and so had a listen for him, but to no avail. I removed the links in the dipole and off I went on 30m. As usual, Roy G4SSH was there, the first of 11 on this band too. I tried 7.032MHz next but the noise level was 9+. I am not sure if it was QRM from the nearby transmitter but using this band would have been impossible. I tried my luck on 14.062 and managed to attract F8AAB Gerard, who applied a spot for me. I only managed another 3 stations, including DL1BJA Klaus, RA3DUO Boris and PA0RBC before it became obvious it was now time to go. When I got home I discovered this was the first activation of this summit on 20m.

A pleasant dander back down the hill to the car, an avoidance of the aforementioned
slippery road and a McDonalds Ice Cream Flurry saw a the end to a good day out.

Thanks to everybody who called in and apologies to those expecting me on 40m. 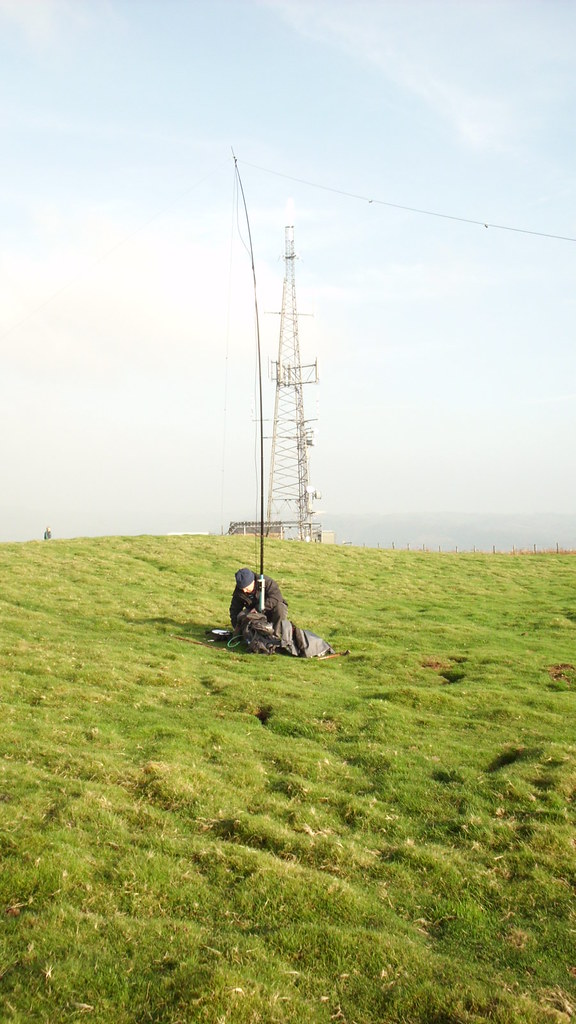 Good report Dave. Thanks for looking for me but you were on a bit late for me. I’ve got to keep my eye on the clock now as big walks and long activations means coming down in the dark. That’s more excitment than I want!

60m is a great band but it seems broken to me right now. Brian G4ZRP says he’s not noticed it being poor but in comparison to previous years it’s a lot variable at the moment. Now maybe my gear is not working properly but by mid-November I’d pop up on 60m and I’d need a big stick to beat away all the chasers. It was easy peasy, call and work many chasers. Now there’s lots of QSB, bellweather signals like Don G0RQL are only 55-57 instead of 59+. There don’t seem to be many chasers about either. Perhaps they are all screaming themselves silly on 10m. Anyway, when it works it’s a fab band for inter-UK SOTAing. 11 in 11 minutes sounds good though, the rate I’d expect at now. I managed 6 in 12mins before going to the crazy world of 20m CW. Crazy, but deep joy!

Anyway, soon after I could see the mast on the summit top ahead. I
stopped momentarily to work M6MMM/P on G/SP-004 and to arrange a S2S a
short time later.
An easy ascent up the tarmac path took us up toward the mast. A short
time later the sun had come out and the dipole for 2m had been erected
on the grassy, trigless summit. I worked Mike (M6MMM/P) again for the
S2S from the Shining Tor and promptly handed the microphone to the
Station Manager who also commenced her activation. This proved to be
really hard work on 2m for a Sunday afternoon.

Pleasure to work you from a miserable, wx wise, G/SP-004 today. Glad you managed to qualify GW/NW-060 Mynydd-y-briw on 2m. Quite frankly, I reckon you deserved another four points just for being able to pronounce it correctly!

Seems like there’s a 2m black hole up there? Nice to work your shack manager too. HF conditions were pretty dire and even the A-99 was a waste of rations today.

Best 73s to you Jill and the kids.

Hi Mike
Thanks for the shout
Wx was lovely at my end - but 2m FM was really hard work!!!
As far as pronouncing it goes, I’m glad it sounded good, I made it up and said it quickly hi hi.
Catch you on the next one.
73
Dave