The WX forecast was for a dry day with sunny periods then cloud then sun. It was also the Low Bands Microwave Contest (23cms, 12cms, 9cms) so I wanted to combine SOTA + exercise + microwaves. I picked Innerdounny Hill as there is a good track nearly to the top and it has a good take off to Edinburgh for non-SOTA microwavers. Access is from the wonderfully named village of Yetts O’Muckhart.

I parked at Littlerig forest car park except there wasn’t much forest anymore. Harvesting looks to be complete for now with approx half the trees now removed. Planting is taking place so in another 35 years it will be like I remember my first visit. Should l last that long I’ll be in my 90s so I doubt I’ll ever see it like I did back 2007.

I can normally get to the trig in about 50mins. We’ve had a bit of snow and there was lots of snow damage to the road and some big lumps laying about still. No problem…

So the first 1.4km was easy and I made good speed. Didn’t look to be much snow on the top. Then the road splits and I went right. Almost immediately the road was in shade and the snow started. Quite firm and crunchy about 3in deep. But it wasn’t too difficult to make good speed as a downhill section approached. Here there was hardly any cover and the snow vanished in places.

Then I got to the most shaded bit on the North West facing part of the hill and the snow became serious.

Looking back at where I’d come from, snow getting about 6in deep near where I stood. 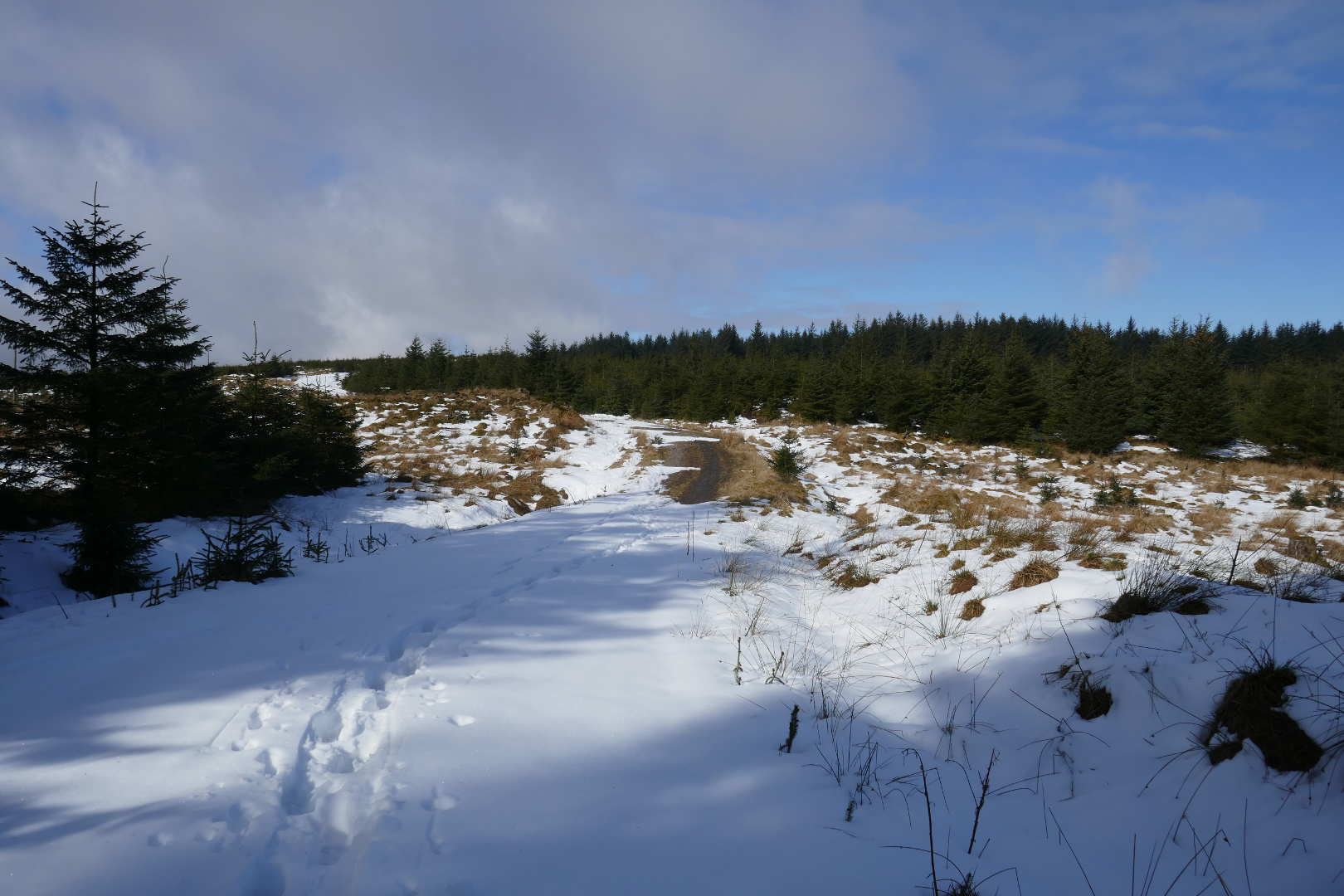 The view onwards up the slope and never getting exposed to much sun. 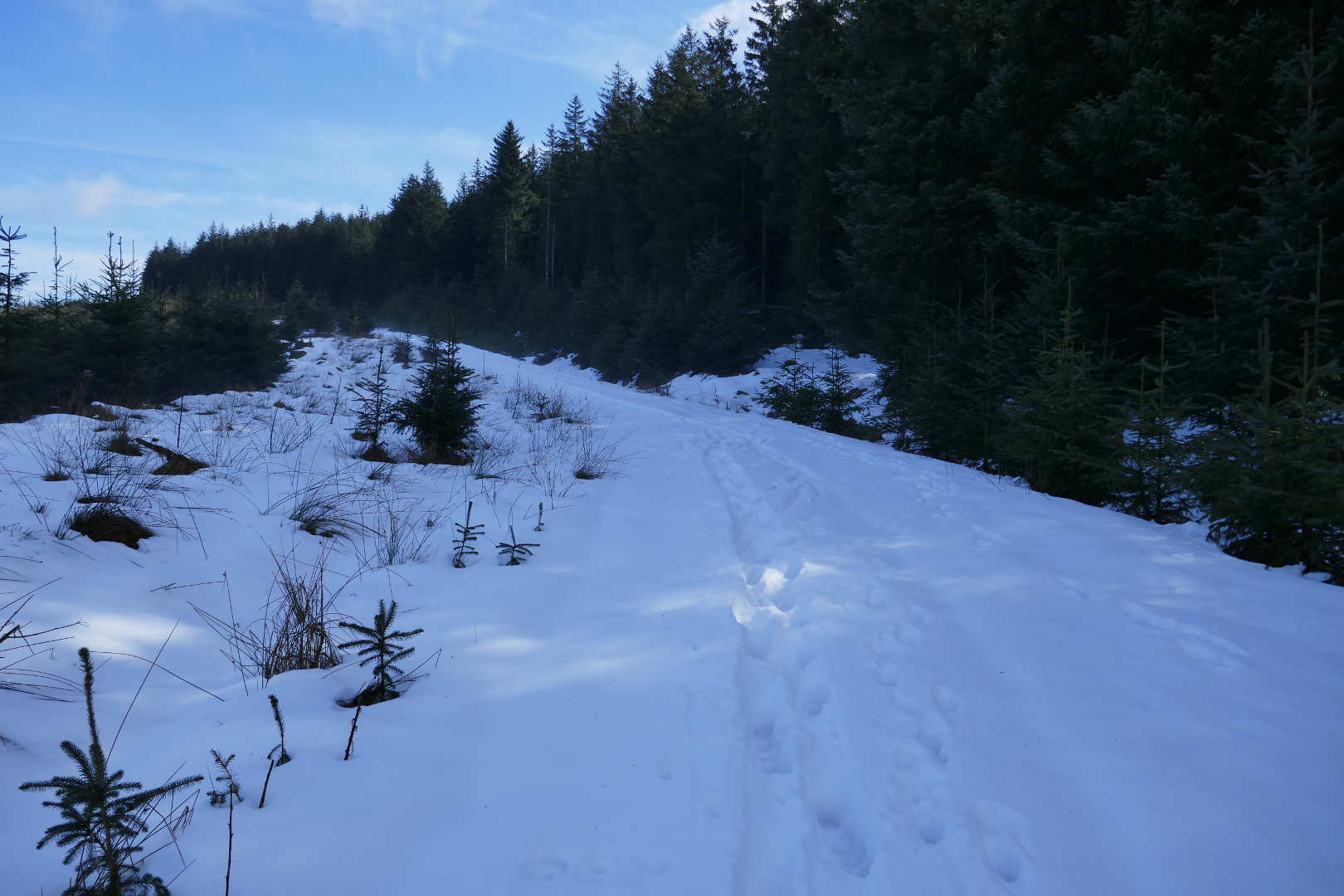 Gordon Bennet! Almost at once I was into 9in deep snow or worse. It was still quite crunchy but not enough to support my vast bulk and suddenly this stopped being a bimble in the forest but a determined slog along the track. And the small but not insignifcant climbing started.

It was serious stuff for the next 2.5km of the track. I cannot recall ever walking for so long in so much snow. I’ve walked further on snow that was nicely consolidated and walked through snow fields that were hard going but this was relentless stuff. Especially on a silly little 1pt summit. Finally I reached the top of the track. From here there is 700m across a wide cleared section of forest. It was cleared a long time back but the deep ditches remain between where the trees would have been. Sticking close to the fence is the usual route having first crossed the 100m or so width. Bad move… the snow was knee deep. I tried my best to step over the deep ditches and slowly the snow thinned out.

Then I slipped and collapsed into a ditch of snow that came past my waist. Only my diginity bruised I climbed up and slid back keeling over onto my side. The side where the 13cms antenna was attached to my rucksack. Amazingly no damage was done. Then I strode on and noticed I had collapsed back onto a walking pole which was now shaped like a banana. Booger! I gently tweeked it to straighted it when it folded on itself. Double booger! It still was usable but the flexed area will fail after a few more walks. 5 years I got out of these poles… time for new ones. And the snow got knee deep again.

The next 700m never ended and whilst I’d be walking in many other people’s footprints there were now just one set and that person’s stride was just a bit more than mine. That made using them hard work. I spotted the walker 500m in front of me. I saw him walk up to the trig point, look at me as I had caught up so he was 200m ahead, he looked at me and walked off. No wave or nothing. Ignorant sod.

What was surprising was there was not really any snow at the summit. Mainly bare and quite dry grass. Summit trig point, the windfarm is on Steele’s Knowe GM/SS-176. 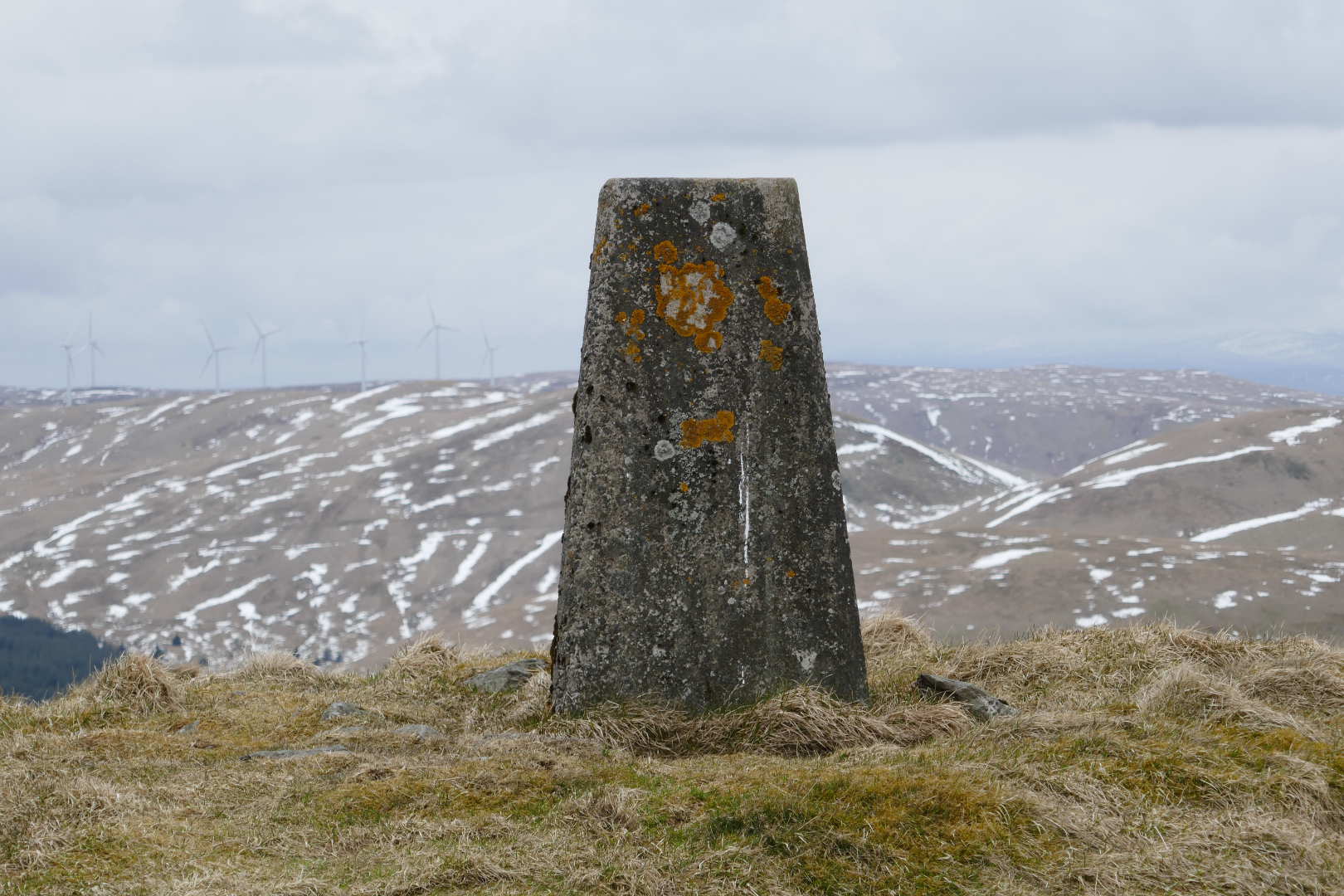 So up with the HF dipoles and 13cms gear. I remembered to finish the antenna mounts and it was easy to fix in place and stay pointed now. On with the 817 and HF sound bad. On noes!!!1!! The sky is broken. But it didn’t seem right and a quick TX showed a horrible SWR. Look up and see one leg not connected to the feeder. Down with the pole, attached cable, up with pole, 60m and 40m lively. Result. I set the power to 0.5W and checked that I could hear GB3CSB on 2320.985MHz, yes S8, and the transverter PTT, yes. We’re in business.

I started back on 60m where MM0GGI just finished a QSO. I worked him and he said I was a rubbish signal. Then MI0RTY who was loud and he gave me 55 which felt wrong, Brian G4ZRP gave me 25 and struggled and Geoff GM4WHA gave me 33. Hohoho! Then I noticed that running 0.5W was the reason! Up to 5W and the reports were better.

Having run out of 60m chasers I switch to 13cms for a mooch.

Business end of 13cms… a double-double-quad. ( I do like how my new camera realises I taking a photo of a distinct subject and sets the exposure/apperture to give a great depth of feel!) 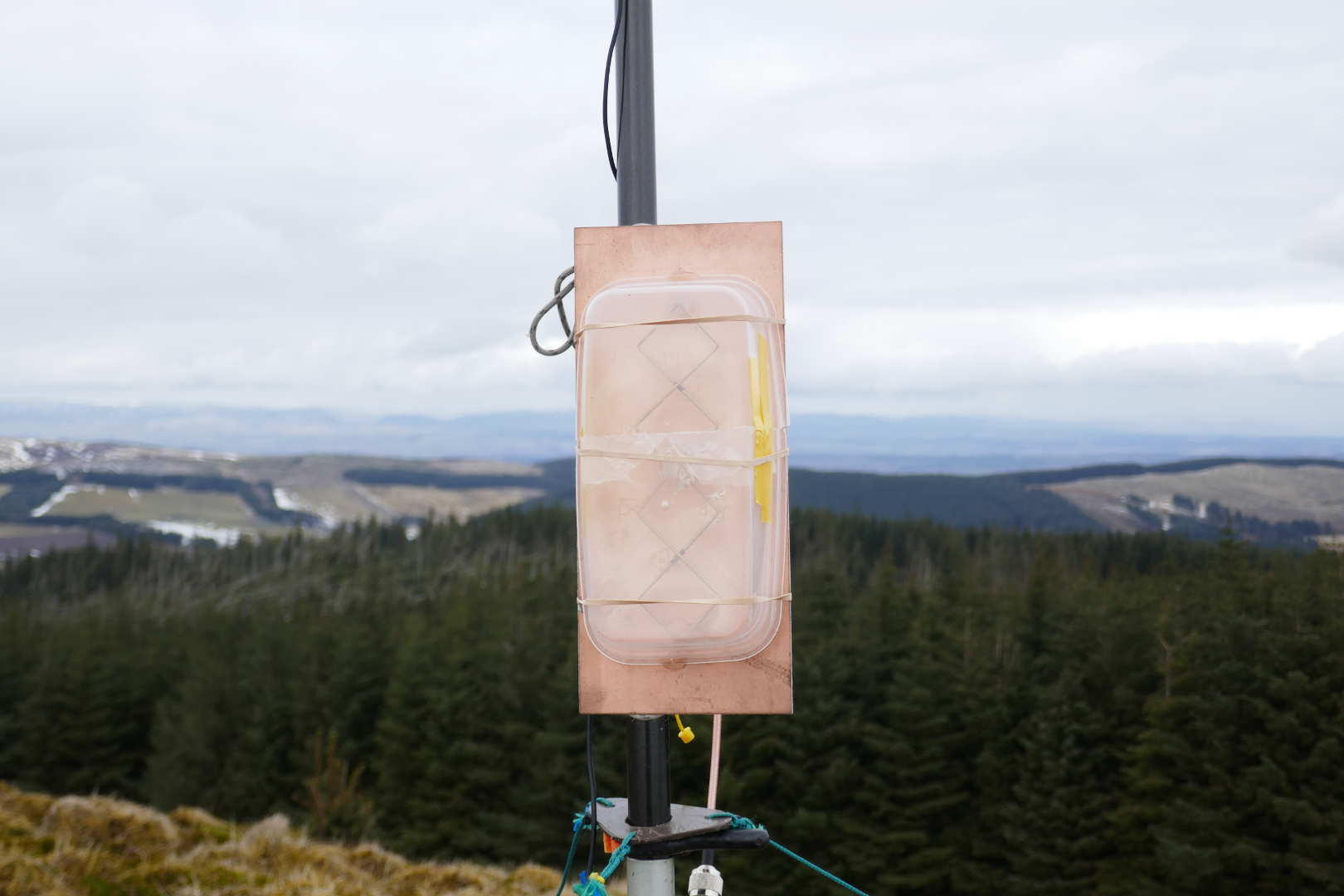 No contest stations heard on 13cms but Dan GM6CMQ in Dunfermline was 59+. Jack GM4COX was out on Gathersnow Hill GM/SS-077 which I was looking at last week. He appeared and was 58. He was far enough away I could drop him to S2 by tweaking the antenna direction. We had a long chat and finally both of us managed to work Paddy 2M0IPO in Glasgow. Despite much calling and waving of antennas neither of us heard a 4th station to complete the activation on 13cms. But Gathersnow Hill was a complete for me only taking 10.5 years to activate and chase!

Onto 40m and there was some damn contest. I worked a few stations and lost my QRG to some idiot sending TEST all the time. Another booger. I moved to 30m and worked more stations.

Looking over to West Lomond GM/SS-154. 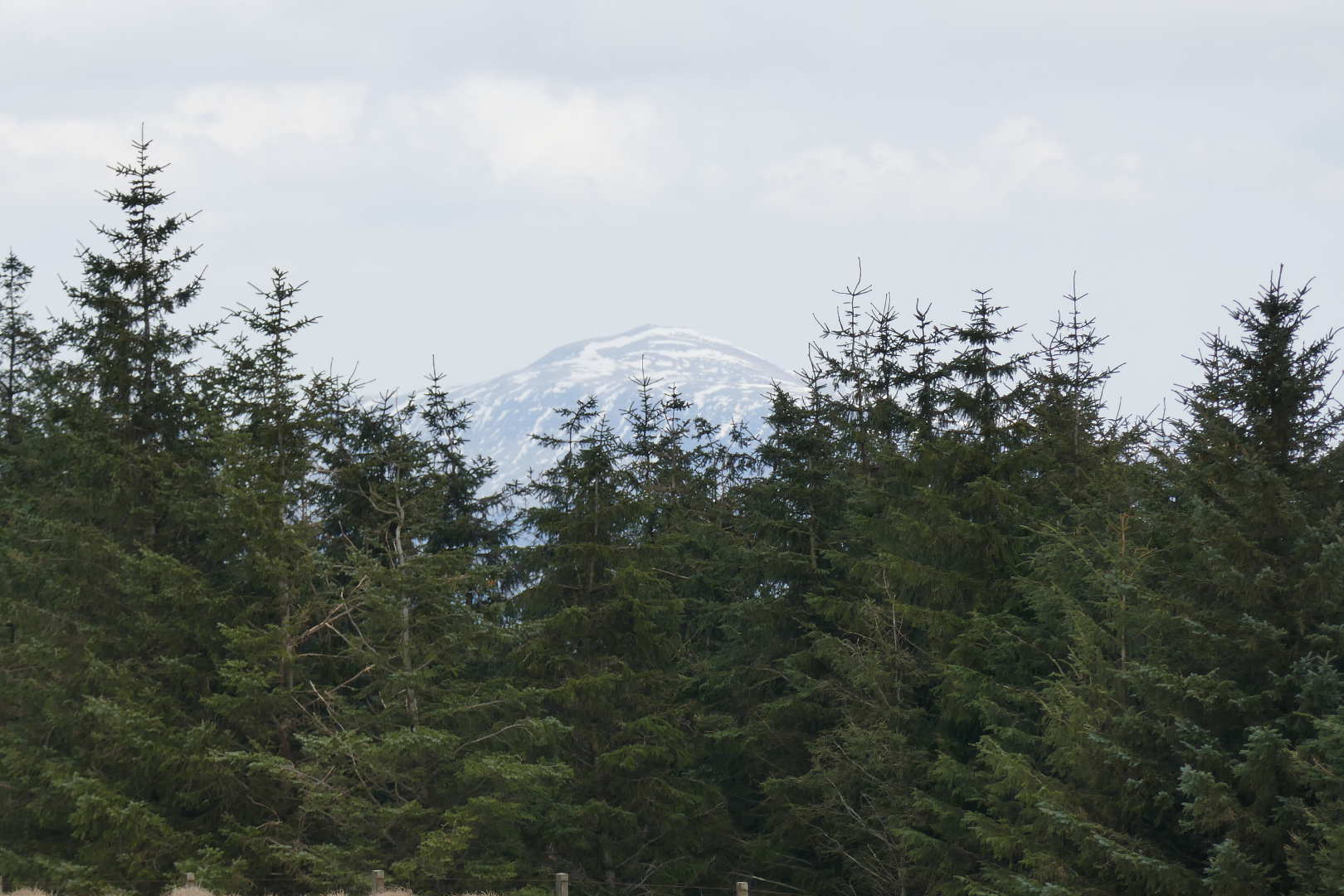 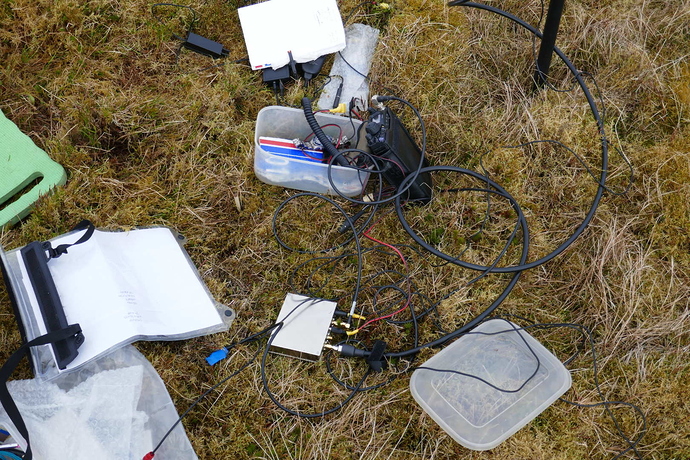 Finally a view up to the Cairngorm Mountains. Lots of snow here still. 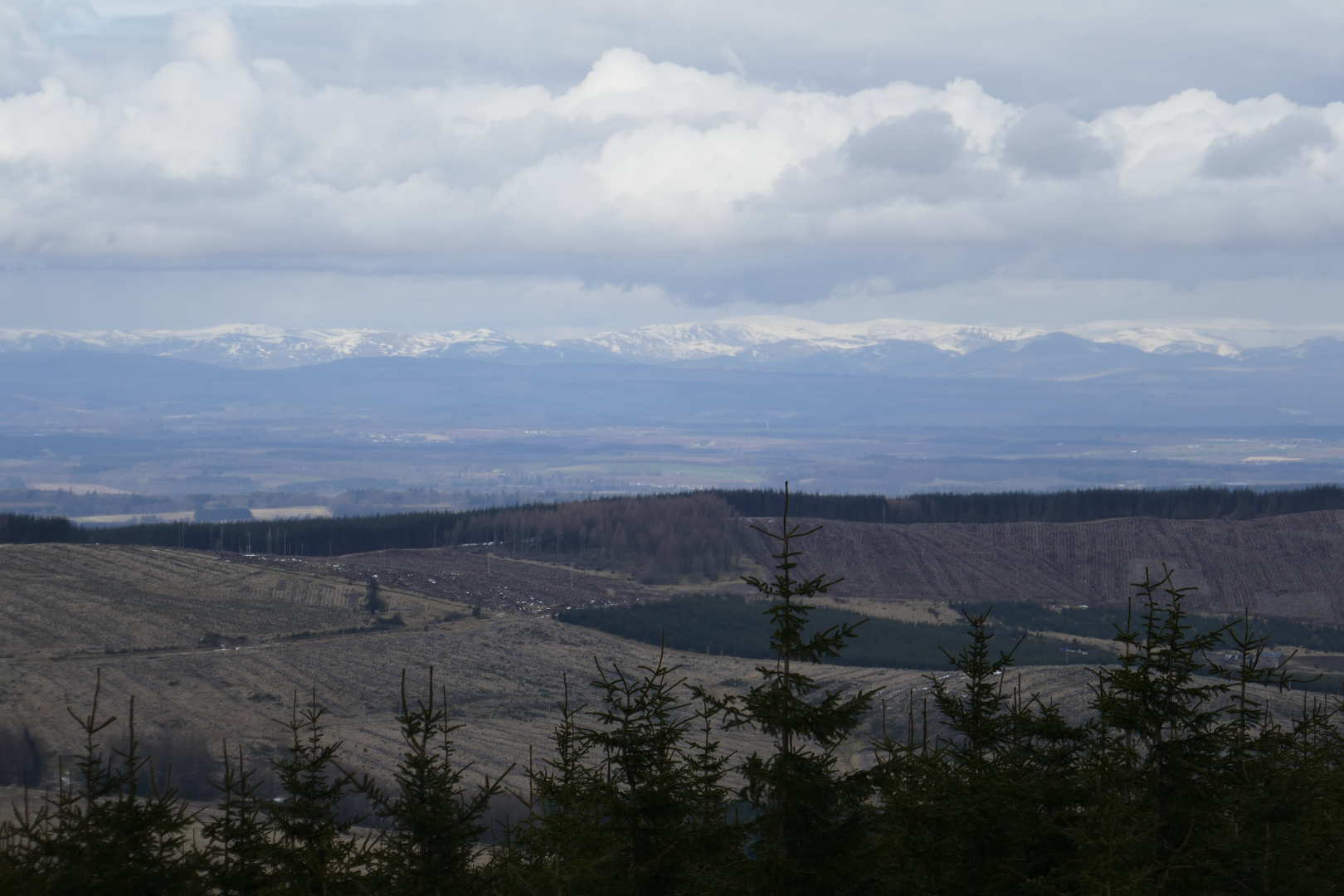 Now I had planned on doing Lendrick Hill as well as it’s even easier than Innerdounny. But with it taking nearly 1hr40 instead of 50mins and I still had to walk back through all that snow I gave up on that idea and had a longer activation here. It started very sunny and warm but even after 2.5 hours on the summit it wasn’t too cold. The walk out was a swine… all that sun in the morning and the fact it was 10C meant the crisp snow was wet and heavy. It was worse coming down than going up. Back at the car it was 2 cans of Red Bull and 40min drive home. Today my calf muscles are complaining loudly.

Still 2 completes and also 3 QSOs on 13cms plus lots of regulars worked on HF. I’d say that was a result.

Thanks for the surprise s2s. We were both busy at the time you called, Bryn GW4ZHI/p was on an s2s with David MW0YDH/p on 2m and me working 60m. Cracking signals between us…seemed like 60m was quite long as Victor GI4ONL was also very strong whilst others were barely readable with rapid QSB. Just to rub it in we were bathed in sunshine with hardly a breeze although the WX for the next few days is not too promising. 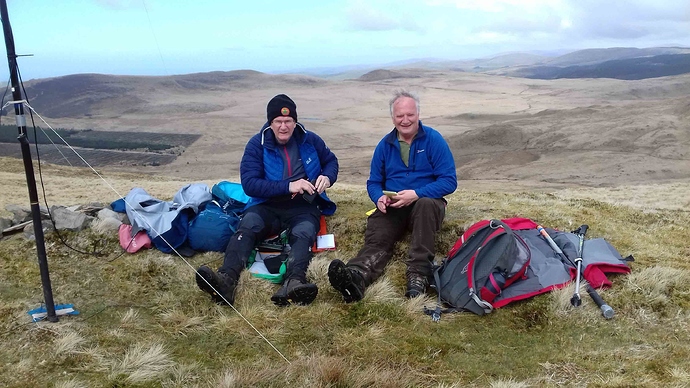 Thanks to all the chasers and activators for all the contacts yesterday.

That’s an excellent photo of the pair of you. To me it perfectly captures the organised randomness of a SOTA activation with jackets and bags and gear in piles just by where you sit.

I just noticed you were QRV when I went to spot myself on 30m, get up, links in and call. Then up, links out, down and spot myself fr 30m. Managed to miss Geoff G(W)6MZX was out on a summit when spotting.

Thanks for the report I now understand the comments about snow. Tried Goat Fell GM/SI-006 but didn’t make it. Must admit to being surprised to see a walker with an ice axe, and when we reached about 800m we found out why! Saved for another day 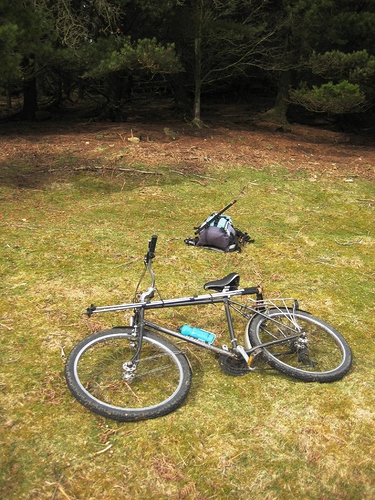 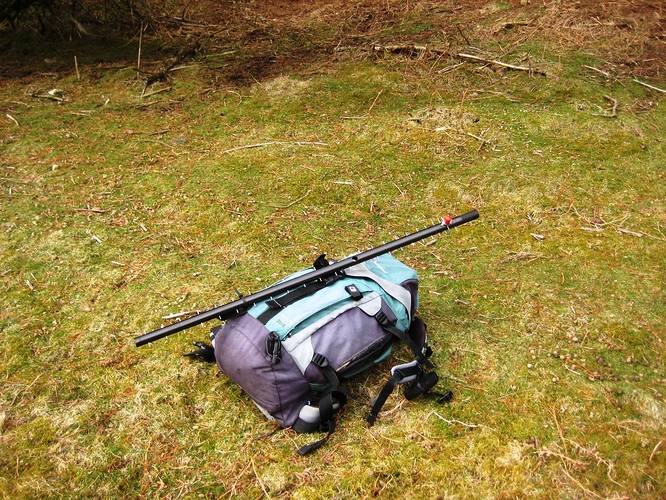 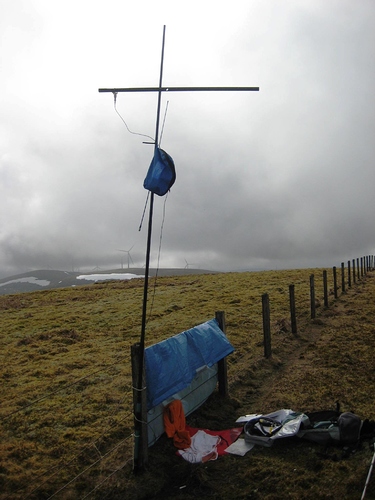 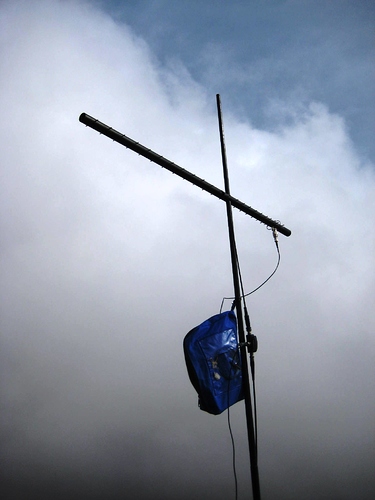