Here is my quick report of activating HB/GR-012, Piz Kesch/ Piz d’Es-cha - 3418m, the highest mountain in the Albula region with a prominence of 1503m.

Piz Kesch has been activated twice eight years ago (on September 12, 2010 as a double activation by @HB9TNF and @HB9HAT), but so far never on HF and never using CW.

Warning: Though a common destination, Piz Kesch is a high alpine tour that combines crossing a glacier with still impressive crevasses and rock climbing up to UIAA grade II or II+. Due to global warming and the geology of the area, the rock is very loose and brittle and stonefall is a serious issue. Belaying is difficult or impossible because of the lots of loose rocks which you will trigger by using a rope. Also, the challenges vary a lot by time of the year and conditions: The steep faces at the beginning of the tour can be from snow, ice, or rock, etc. You need to be very adaptive and apply appropriate techniques and tools. A protective helmet is a must, but the stonefall can easily include rocks way too big for a helmet ;-). Avoid this tour on crowded days and idealy start early after a cold night early in the summer season.

Directions to the Hut:
You can ascent to Piz Kesch either from the north via the new Kesch hut or from the south the Es-Cha hut (Chamana Es-Cha), which is what we did.
The tour is also popular in winter as a skitouring trip, by the way.
There is a small parking lot for the hut at the Albula mountain road (“Albulapass”). The position is called Punt Granda at 2.251 m ASL.

From the parking lot, follow a footpath to the Chamana Es-cha, starting in a east-north-eastern direction. The path is not very difficult but has a few steep passages that can be difficult in rain or with lots of snow. Here is a description of that part in German. It will take you about 1.5 hours. We did the Piz Blaisun, HB/GR-053 on the way to the hut, but this will be described in a separate trip report. Stay at the hut overnight and enjoy the great hospitality and food on the hut. Michael, the operator of the hut, and his team are among the nicest people in the Alps I have met.

Approach:
We got up at 4:45 a.m. because the weather forecast was not very stable, and we wanted to avoid stonefall from other climbers and the melting of the remaining snow. After a quick breakfast, we left the hut at 5:45 a.m. You follow the well-marked footpath from the hut to the Porta Es-Cha saddle at 3.008m, first over stone and alpine meadows, later crossing steep snowfaces that may already recommend crampons and an ice-axe if icy. The last ca. 50 m to the saddle are steep (UIAA I-II) but there is an iron chain as a support. Some of the bolts of the chain are a bit loose, so don’t rely on this chain too much.

From the saddle, you descent to the Porchabella glacier. Put your crampons, ice axe and rope on before entering the glacier. It still has impressive crevasses; also the gaps between the rock and the ice can be substantial I was told. I would strongly discourage anyone from crossing the glacier without using a rope. You will find reports of people doing this, but this is not reasonable (maybe on skis in winter).

At the end of the glacier, make a right turn and enter the main summit via the north-eastern ridge, but keep a safe distance from the area below the main summit; there is severe stonefall (really huge rocks).

Then follow the path marked with red dashes to the summit, which combines snow, loose rock, and climbing up to UIAA grade II or II+. Important: There is a new route (from 2012) that avoids some of the worst parts of loose rock in the east face and rather escapes into the north-east ridge. Climbing there (called “Himmelsleiter”) is more difficult, but the rock is much more solid. A topo of the new route is available in the hut. There are a few bolts in that part, but we climbed that freely (but I admit it was challenging with a big backpack and bold mountain shoes).

On the summit, there is a small wooden pole to mark the highest point.

Depending on conditions and need for belaying, it will take you ca. 3.5 - 4 hours to the summit. You need to go slowly, there is really a lot of loose rock that endangers yourselves and other parties in the route.

For a detailed description, I recommend the following two links:

Operating Position:
I set up my gear on the actual summit. There is not really a lot of choice. I mounted my 6m carbon-fiber mast directly to a metal pole in the summit and deployed my SOTA Superlight Vertical for 40-30-20m matched with an Elecraft T1 tuner. It will be hard to deploy a dipole or inverted vee on the summit.

Luckily, some chasers found me on my frequency despite this. @EA2LU was kind enough to spot me manually with the correct frequency:
RBNHole Spots: 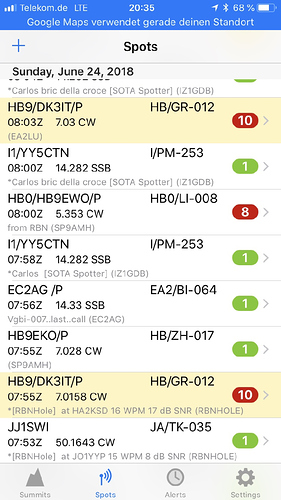 I was able to work 13 stations, including two S2S:
Log:

At 08:15Z I had to QRT because of the unstable weather. My sincere apologies to all chasers whom I could not work, but we had a really long and challenging descent ahead of us. 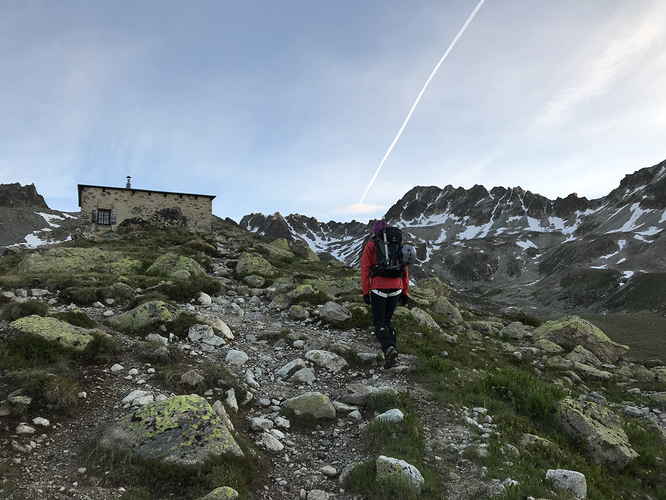 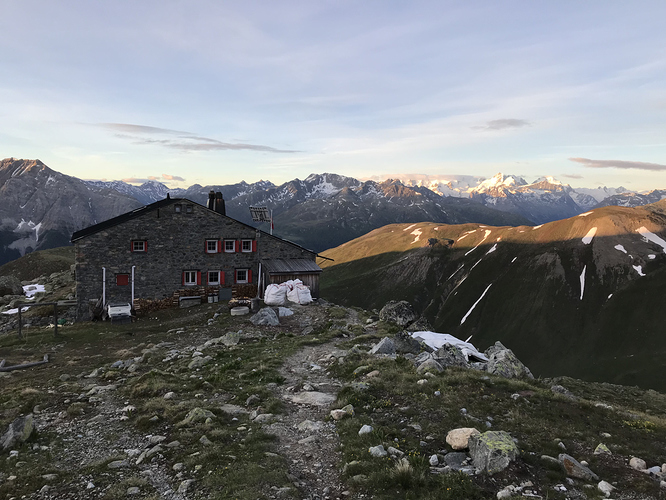 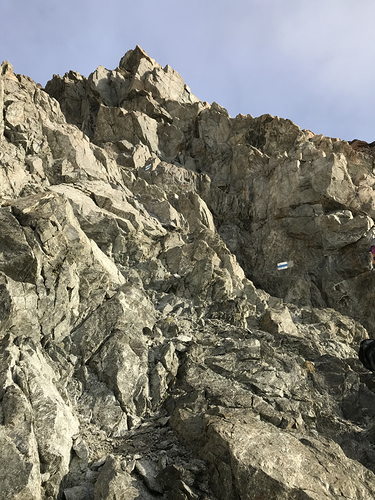 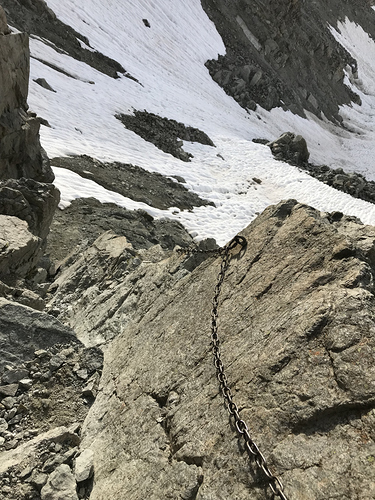 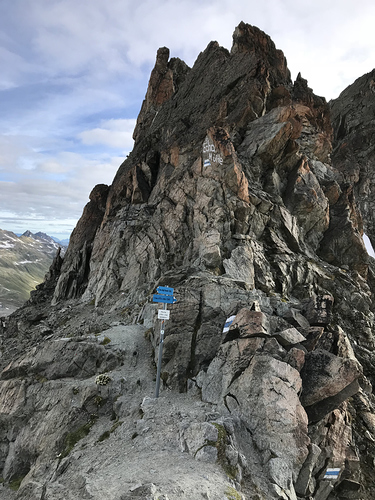 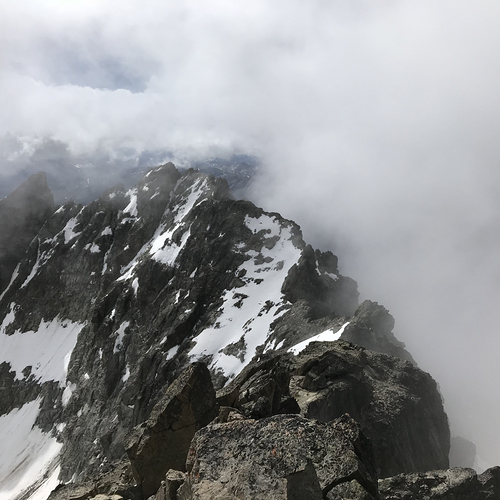 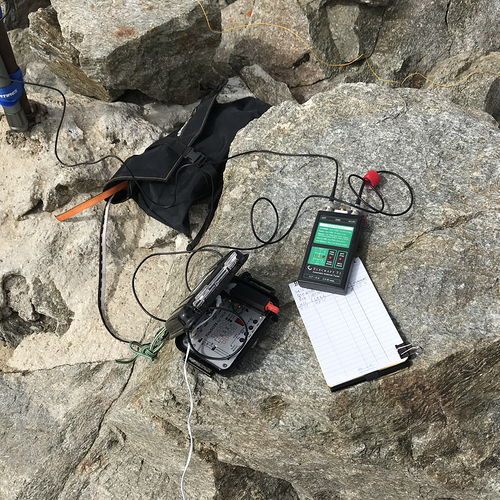 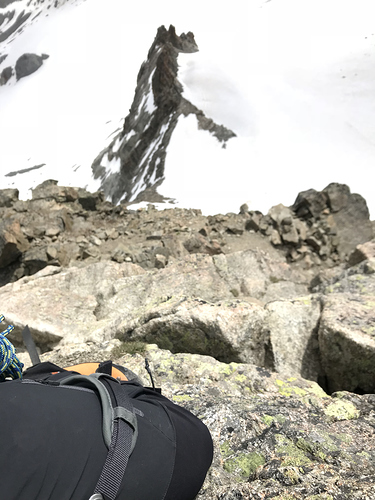 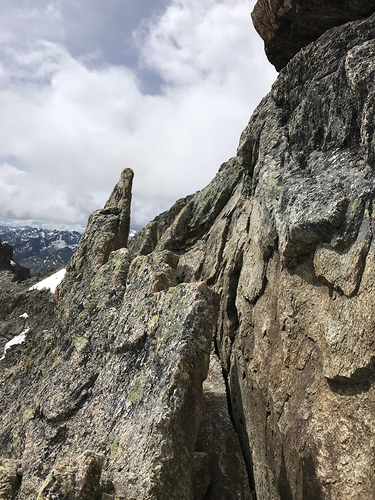 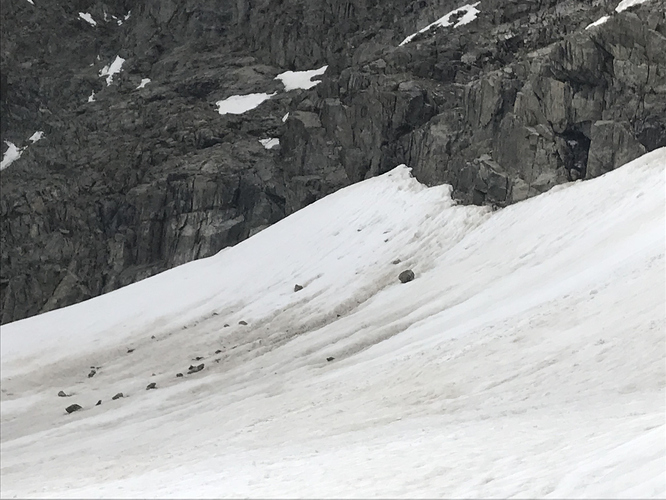 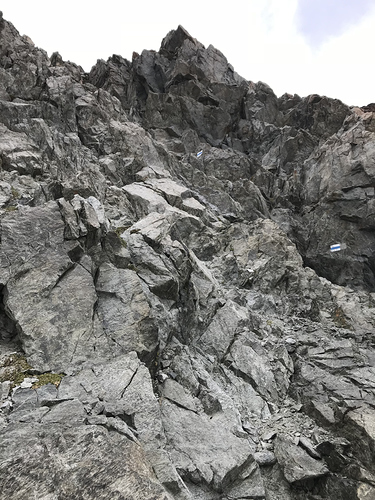 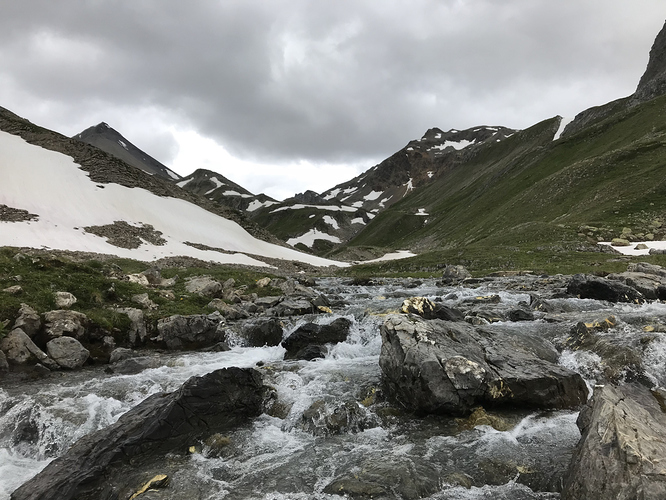 Congratulations on the successful climb and activation of Piz Blaisun and Piz Kesch, Martin! I was hunting for you during both activations. I almost made the contact with you on Piz Blaisun but there was deep QSB, and at the moment I thought I heard you coming back with my call, your signal disappeared in the noise and did not come back. Luckily for the “big one”, Piz Kesch, propagation was more favorable, and I managed to make the QSO with you. I feel very lucky to be one of the just 13 HF contacts ever made from Piz Kesch! Thanks for giving us the opportunity to work these rare SOTA summits on HF CW, Martin! And thanks for the great activation report, great story and photos! 73 de Mike PA7MDJ

Thanks, Mike! Yes, I lost your signal on Piz Blaisun after the first exchange. But Piz Blaisun will surely be activated again sooner or later, as @HB9HAT seems to go there once a year at least

Congrats Martin, thanks for the activation. and the great report.
GR was still missing on my list for the HB9SOTA S2S award. I could hardly hear you in the noise the day before when you were on Piz Blaisun, and I activated in HB/SO, so I decided to activate a summit close to my home QTH when I saw your alert. I’m glad it worked out this time.
73 de Jens HB9EKO

Dear Jens,
thanks! As for the differences in signal strength between the two summits, I think this was mainly caused by the irregular radiation pattern of the up-and-outer antenna: I was using two radials, one more or less tuned to 40m and one more or less random, and matched the antenna using the T1 tuner. On the Kesch, I was able to lay out the radials more carefully.