I having been itching to activate Beinn Ime and Beinn Luibhean (GM/SS-025) for some time, this area use to be my playground when my job involved a 2 week on and 2 week off rotations.
But now with a change of job, 2 young children and a change of address, weekends have to be negotiated with diplomatic precision, the days are long gone when I could drop the XYL off at her work, and the dog and my self could hit the hills.

Negotiations had taken place, rucksack was packed and LiPo’s were charged, the only thing left to do in the morning was a petrol stop and provisions from the garage.

Travelling along Loch Lomond I noted that the cloud base was low on Ben Lomond (GM/SS-011) but the summit could be seen now and then through the cloud cover, the snow was only patchy at best.
I had 2 pair of boots with me, and I would make the decision at Glencroe if I needed to take crampons with me for the accent.

As I drove into Arrochar, The Cobbler (Ben Arthur GM/SS-020) was in thick cloud but no snow was visible on the lower slopes as I drove up Glencroe and parked at the lay-by, one car was already parked, there is space for about 4 to 5 cars here so no problems.

At the Lay-by the temp was very mild with a light breeze and no snow was visible to the cloud base of about 700mtrs so the decision was made and I left the crampons and axe in the car, this would save me a bit of weight as the rucksack was already a bit on the heavy side with 3 radio’s , HF antenna & Balun, VHF Di-Pole, 4mtr slimjim, HF linear, 3 LiPo’s and all the paraphernalia to link all this together.

From the lay-by at (NN 2428 0601) there is a path north and south of the stream, I took the path to the south of the stream and followed the fence line to (NN 2489 0654) crossing the stream and following the path on the north side to the small dam at (NN 2532 0675) from here I followed the stream north to (NN 2539 0736) this section is hard going and there is no defined path, but in poor visibility, as is the case today you have something to follow, a little further up (NN 2564 0766 750mtrs) I had a short break in the cloud cover to let me see that above 800mtrs, Ben Ime had a total snow covering from here I pushed on up to about (NN 2582 0798) where I listened to Elvin GM8BBA reading the RSGB news in Glasgow. I gave Elvin his obligatory “Thanks for reading the news” and report, Elvin then returned with an announcement that I was near the summit of Beinn Ime and that the hoards should listen out for me.

I had deliberately not put an alert on SOTAWatch so I could abort or change the summit; the visibility was now down below about 100mtrs, by my reckoning I had about 150mtrs vertical still to climb (Navigation by map and compass) the snow was easy going under foot so I pushed on up until the familiar rock outcrop at (NN 2573 0827) appeared out of the cloud with the faint figures of 2 climbers picking there way up and over the outcrop, from here it is an easy walk of about 300mtrs to the summit cairn.

I was now at the summit, the 2 climbers that had past me when I was listening to the RSGB news spent all of 5 minutes at the summit before returning in the direction they had come up, I didn’t have that luxury! The HF antenna was erected for 5mhz and the 817 was switch on, nothing no reception, it took me the next 10-15 minutes to discover I had a filter switch on in the menu “Dooo” the radio bursts into life at maximum volume on 5.398.5mhz with John M0JDK/P on G/SP-001 Kinder Scout (369km) who gave me my first contact and first S2S.
I decided to have something to eat and a scan round 2mtrs before I tackled the hoards on HF. While working Dennis MM0DNX and Jim 2M0RMP on 2mtrs in Glasgow, Rob G4RQJ/P on G/LD-033 Lord’s Seat (205km) came on 5.398.5mhz giving me my second S2S, next was Stuart G0MJG/P on G/SP-005 Pendle Hill (310km) to give me a third S2S I gave notice that I would QSY to 5.371.5mhz. The first contact was Robin GM7PKT not P today with 5/9+30, for the next 40 minutes I work 26 stations on 5mhz. Thanks to all the stations worked I was going to work 80mtrs after but my shack was getting a bit cold and the visibility was less than length of the 60mtr dipole at times. 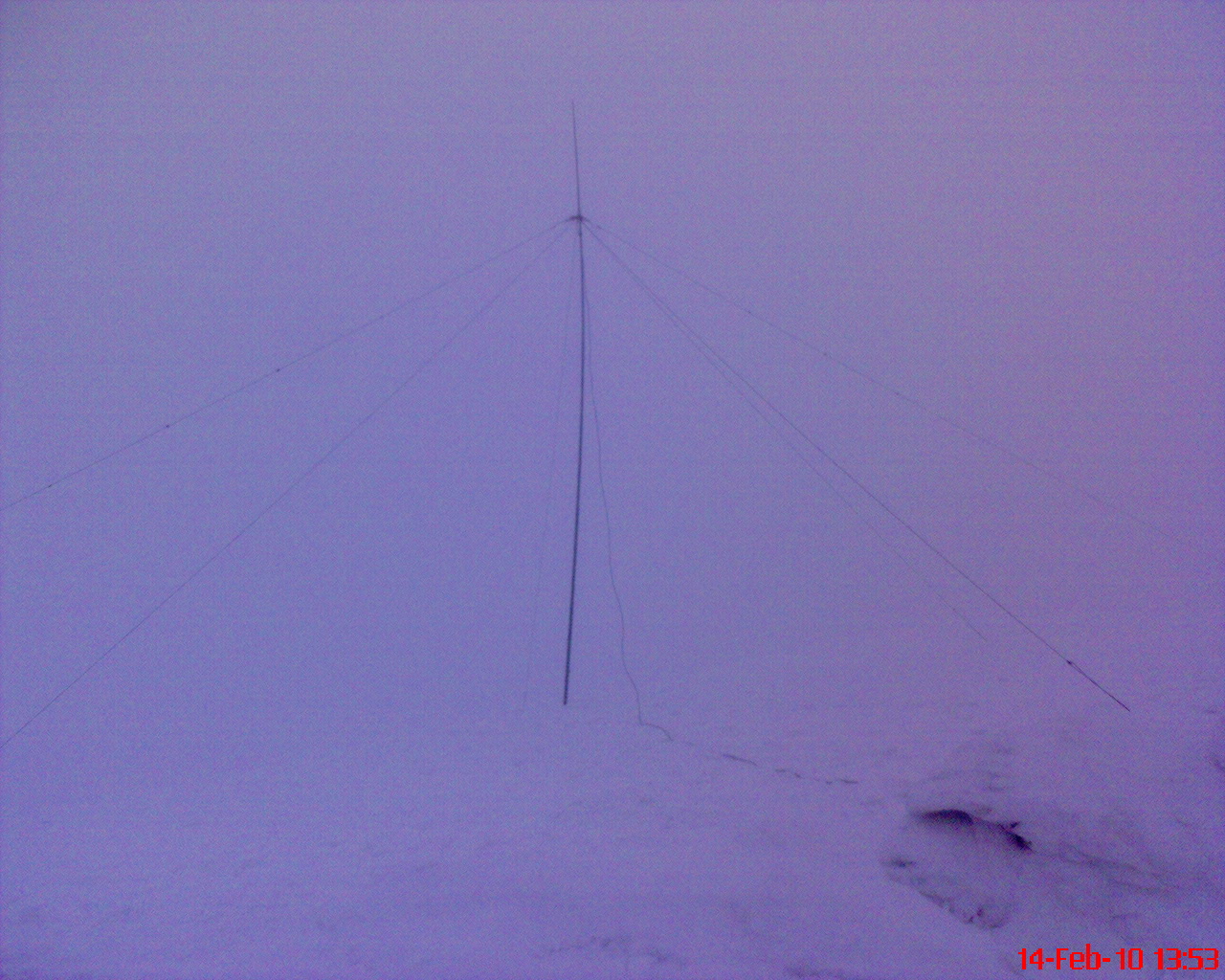 The decent from the summit was made easy by the now well-defined trail of foot prints too follow.

Thanks to all stations worked
Alan
MM0XXP

You must have started just after I QSY’d to 40m to find a RTTY contest obliterating the band. Shame or we could have had an S2S. I saw the spot and thought “Oooo, that’s a big’un for this time of year!” especially as there was a fair amount of snow left laying on Trahenna which at about 540m is a mere pimple compared to Ben Ime!

5MHz was in fine form, shame about the RTTY sat all over the QRP frequencies on 40m

Sorry I missed you, I caught the tail end of you when you QSY to 40mtrs.
If it hadn’t been for the stupid question brigade on the summit I would have been fast enough to work you.

I had about 4 groups of climber come on to the summit in the 2 hours I was there, and each group interrupted me in mid QSO, (so sorry too any one who was in QSO when I disappeared or forgot what I was doing) I even had to stop at one point and take a group photograph.

This could be a good reflector topic, “ Stupid summit questions”
Some that I got on the day:

Did you walk up?
Are you walking back down?
Is that antenna always there?

This could be a good reflector topic, “ Stupid summit questions”
Some that I got on the day:

Did you walk up?
Are you walking back down?
Is that antenna always there?

Ive got one to add:-

In reply to MM0XXP:
In the days of SWAMP (Scottish Worked All Munros Project - a predecessor of SOTA in the early 90’s) I was activating GM/SS-009 Beinn Dubhchraig on 2M. On top of my trusty wooden walking pole I mounted a telescoping 5/8th GP driven by a FT208.

Now this was the early days of mobile phones and the FT208 with it’s keypad looked a bit like the ‘bricks’ that were in use in these early years.

A group of walkers already ensconced of the summit noticed my exertions in erecting the aerial and the rig and discretely asked if I was going to make a phone call and why the aerial? I replied it was for a long distance call.

Don’t think they really bought it (:>)

I was interrupted far too often on Allermuir Hill once. This is a tiddly hill overlooking Edinburgh and is extremely popular. It’s also a really nice wee walk aswell. So it wins on many counts. Except for the questions. The questions are always bad on this one.

It also overlooks the Dreghorn Barracks Army Rifle Range. I was asked if I was spotting for the range once. My reply was “They’re teaching them how to setup mortars today and I have to report any mortars falling long.” I kept a straight face as the walker made a hasty retreat.

Never mind on the S2S… there’s always next time.

Very pleased to catch you Alan, even though I did challenge your receive capability on 5MHz with my QRP to a piece of wire rigged as a makeshift indoor antenna.

You may have been my weakest signal of the day Gerald, but you were also my furthest contact at 655km to St Austell. You were about Q3 at first but Q5 with the volume turned up.