Hello,
On Sunday 7th March, I caught the 0610 Amtrak train from San Diego to Los Angeles in order to meet with Stuart Schreiber KI6J, AM of the W6 Association. I saw people surfing before 7am in the Pacific ocean and chatted with a party of Amish people in English and German who were spending the next 4-5 days on the train going home to New York state from their holiday in Mexico. A cheerful Stuart found me at Union Station and took me to Chinatown for a Dim Sun breakfast - fascinating and very good too.

Car parking was possible at over 1000 feet in Wildwood Canyon Road [I think]. We nipped round the barriers erected to avoid nitwits driving their 4x4s up the shale track. Steady climb of over one and a half hours duration [via the red path labelled 4 and the yellow path Vital Link] afforded great views of the proper mountains of the San Gabriel Range, the LA conurbation and out to the ocean. 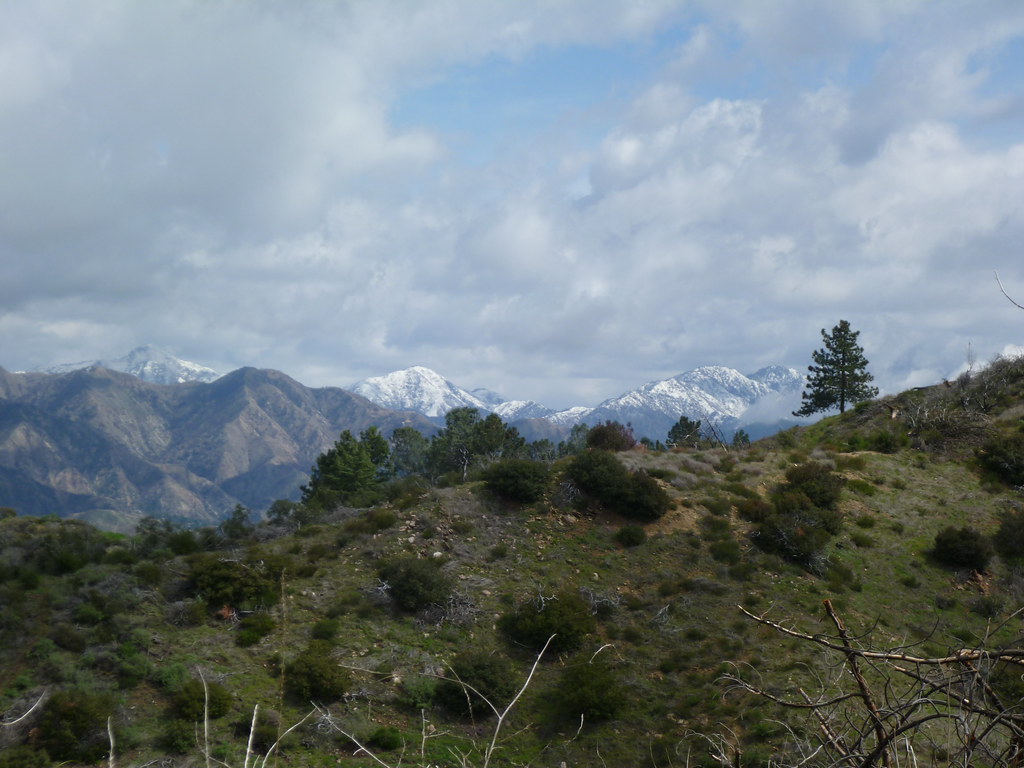 A steady stream of walkers and joggers came up the path. We met the spaced out dude who’d left his leather jacket half way down the hill. We walked round the north side of the house on the ridge before making our way towards the top proper.

The summit, Verdugo Peak has a transmitting station which gave Stuart tremendous trouble due to pager breakthrough on 2m FM. He made three QSO’s on 146.520 FM which I logged for him, the first with a fascinating fellow who had started in the hobby in 1926. Due reverence was shown. 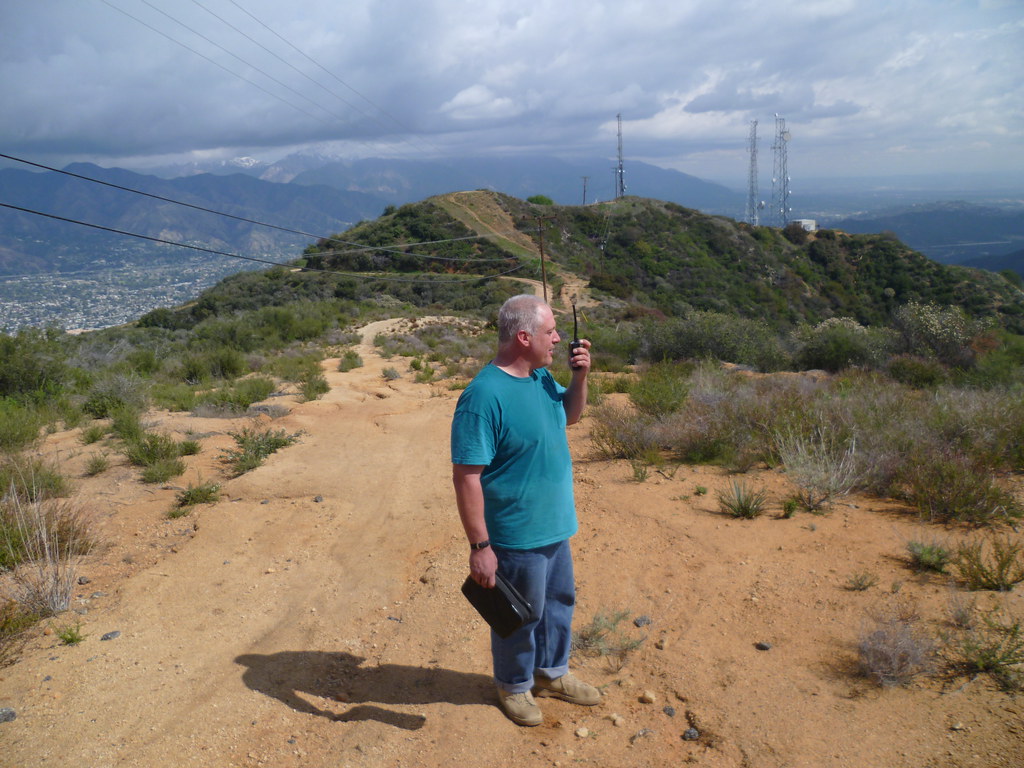 With one million radio hams in California [1/3 of the USA’s amateurs] , SOTA is his way of being sufficiently different for other hams to want to contact him at all. “A US area 6 callsign is so common”, complained Stuart. On the other hand 2 of the visitors to the summit correctly identified the activity as Ham Radio probably because they have relatives or friends in the hobby. Stuart was relieved to know that UK activators get asked daft questions too! Lots of Mountain Bikers arrived at the summit and turned round for a tasty downhill ride.
Lots of space for HF dipoles. Quiet on 20m CW though with the day’s only Morse QSO being with a station in Oklahoma. This last QSO was considered a success as the other station had heard of SOTA and wanted the summit reference. 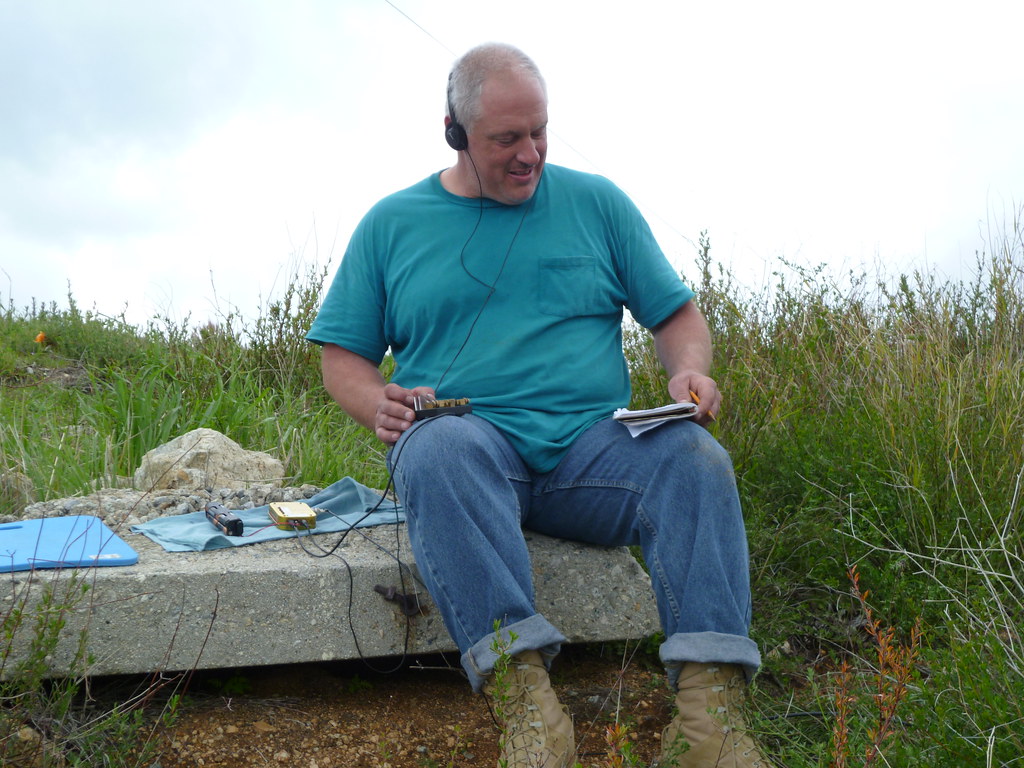 Crashes of thunder somewhere beyond the San Gabriel mountains lead to us packing up. We then had rain and sharp heavy hail on our walk which Stuart braved in his jeans and T-shirt while I put on my full Paramo outfit. I’d brought it all this way and was going to wear it after all.
The section of the hill covered by this walk is sandy /shale terrain and loose under foot with some landslides to negotiate. Verdugo Peak is a fabulous small mountain on which to cut your North American SOTA teeth and a better bet than the famous CT-037 Cahuenga Peak [Mount Hollywood] for satisfying radio activation as I found out next by climbing it.

This is the touristy one for the visiting activator and, for a foreigner, the USA’s second most famous lump after Mount Rushmore . We visited Mount Hollywood on Oscars night too. Parking by the observatory in Hollywood was being strongly contested during our visit. Guile and luck got us a parking spot within a mile of the start of the trail. Not having a map, I can only suggest you contact KI6J via QRZ.com for route details. The best I can find at present is http://www.flickr.com/photos/cahuenga/4312418242/

The route he chose used an abandoned road for the first half of the climb, climbing steeply it followed the side of the valley opposite to the Hollywood sign. (photograph it on the way up). After 2 miles, I think, we used a steep narrow, sandy track to traverse the ridge and reach the road on the other side that serves the commercial antenna station on the summit of Mount Hollywood.
This picture shows the view back to the Verdugo and San Gabriel mountains http://www.flickr.com/photos/wolvesonwheels/4433749876/in/pool-sota_pics/

At the last bend in the road lies the path to Cahuenga Peak which is seperate and of course higher than Mount Hollywood. You can sneak a look at the rear of the famous sign now in corrugated metal. We had to squeeze round an obstructing fence to continue legitimately on our way.
The last portion of the ascent needs a deal of time as the path is sandy, narrow, steep and with much vegetation to snag your SOTA pole. As it was getting towards sunset, we walked to where Stuart declared we were in the Activation Zone. No room for HF dipoles on the summit. VHF FM was much easier than on CT-034 with a steady stream of callers for KI6J mountain-top portable calling “Hello 2 metres”. Great views of the stars’ houses and Lake Hollywood afforded from this lofty position. Our descent to the first road was a touch treacherous after the recent rain in the dusk and I was glad to be back on the abandoned road as the last of the light faded. However no sunburn today - hooray. Thanks Stuart for a great day out and a fascinating insight into Ham radio in W6, the difficulty of access to mountain tops, dastardly park rangers and a day of refreshing conversation!

On a wider note Stuart believes SOTA in the USA is “about to go viral” once a celebrity activator comes on stream. The Colorado association is in preparation and Youtube videos of Steve WG0AT on SOTA activations are likely to be that seed.
I would also like to thank the members of Palomar Amateur Radio Club http://www.palomararc.org/index.htm for a splendid evening with a talk on the Dwingeloo Radio Telescope http://camras.nl/ [which has a 23cm Websdr receiver http://websdr.camras.nl:8901/ ] given by Robert Langenhuysen PA0RYL and the lift to and from the hotel by David Doan KC6YSO.

In reply to 2E0DAI:
Very enjoyable trip you had David, Did you send any greetings under Stuarts supervision or did you SWL? Sean M0GIA

David’s current licence is not valid outside the UK, so no. Only full (or whatever they call them today) licences get any kind of reciprocal privileges Sean.

In reply to MM0FMF:
I realise that a 2E0 call is not legit in the USA, Can he send a greeting using Stuarts call sign? Like scouts can during JOTA for instance, Would this be allowed? Sean M0GIA

Any UK full licence holder can supervise the passing of greetings messages by a lower licensed or unlicensed person here. Whether US amateurs can do this or not I don’t know. Even so, greetings messages would not be valid logs in SOTA for the person passing them, they would still be considered as transmissions by the supervising amateur.

You need to be licensed to participate in SOTA - activating or chasing - the SWL section is open to those without a licence.

In reply to M1EYP:
I thought that was the case Tom. Sean M0GIA

In reply to M0GIA:
I declined all Stuart’s kind offers in this regard saying the SOTAites at home were very hot about the rules ;¬D .My radio instructors tell me that listening is 3/4 of the hobby.
I had a splendid day out with a very generous and interesting man and learned a great deal. If I’m W6/M0xxx “mountain top portable” I know a hill and a route I can try in CA. A severe bout of cabin fever was averted in exchange for a blister on each foot - poor choice of walking socks. My copy of Advance! got damp in my rucsac in the downpour too. It was my summit reading material in case of long periods of cw operating without a loudspeaker. Also Californian operating is far less formal than here [on phone anyway].
The hams I met bemoaned the state of their licence examination system not least because all the questions are published in advance. Stuart thought our foundation licence was a splendid thing compared to the Technician with his 2kW on 2metres.

I’m on G/LD-039 Baystones / LDW-178 Wansfell Pike this weekend on VHF so please don’t let Jimmy delete it till next month! 73. David