As promised, here is quick write-up of lessons learned while activating HB/UR-042 “Badus” in the Swiss mountains in winter as part of a ski tour with non-hams.

BACKGROUND
I often go mountaineering with people who are not ham radio operators. The summits are typically pretty attractive for SOTA, because they are non-trivial to reach and thus have a very limited number of activations. In most cases, you have to be a party of at least two or more to do a safe ascent, because you need company to rescue you in case of avalanches, crevasse falls, or other alpine risks.

Now, the problem is that this setting limits the time available for an activation, because one would normally just stay a few minutes on the summit and then proceed to the decent. It is often too cold to stay on the summit for longer.

This means I have to master a fast and short activation, or no activation at all.

EQUIPMENT
I took the following equipment with me:

ASCENT
Disclaimer: The Badus is a serious alpine summit. Especially in winter, it requires substantial alpine experience to avoid potentially lethal risks, like avalanches and the risk of falling from heights. Also, orientation can be difficult if weather conditions are bad.

A map of the area including color indicators for the steepness is here (thanks to Paul HB9DST / AA1MI for the link!).

We took the summit as a ski tour in March, i.e. on climbing furs and skis. We stayed in Andermatt and took the train to
Oberalppass Railway Station. The first train left Andermatt at ca. 7:50 and we were ready to start the ascent at ca. 8:30. For spring conditions, i.e. risks of wet avalanches caused by the rising temperatures, this is actually already very late and it would be better to stay at Oberalppass and leave a lot earlier.

The route starts at a plateau at 2044m which you cannot miss, because there is a red and white “lighthouse”, and then goes mostly in SSE direction, following the valley. Be aware of the steep faces left and right - the safest route depends on the conditions, i.e. whether dry avalanches (early winter) or wet avalanches (late winter and spring) are the main danger. On the map, this route has number 24a and is identical to the way to Maighelshütte / Camona da Maighels up to a small lake at ca. 2174m (the lake is covered by snow in winter, be careful). Then, take a sharp right turn and climb on the southern (left from below) side of a steep small gorge, then cross the gorge in a very narrow ravine until you reach a bigger lake (Lai da Tuma) at 2355m. The best way to pass the lake depends on conditions. From there, you reach a point ca. 50 m below the saddle at 2749m in a big 180 degree turn on a face that is exposed to NNE. This section has very steep parts which require stable conditions in winter. From the point at 2749, you ascent in a small S curve, roughly in eastern direction to a ridge that shows to NE. From there, you can continue on skis if conditions permit and if you are confident on climbing furs until the end of that face. You will find a small saddle. Get out of your skis at this point and continue on foot. An ice axe is helpful, crampons might be needed if there is ice on that part (which was not the case for us). That part is surrounded by steep faces, so a fall will most likely end your ham radio career.
You then reach the summit at 2928m. The summit has two names: “Badus” and “Six Madun”.
The summit is pretty small, but has sufficient space for an activation.

ACTIVATION
I arrived at the summit at 13:17 local time, about ten minutes ahead of my group. I quickly deployed my equipment in a procedure which I had memorized during the ascent.
There is a cross on the summit, but it is made from metal, so it likely interferes with a wire antenna. I used a 6m fiberglass mast, which I mounted directly in snow using a long (45cm) tent peg and velco straps. In the end, I could also have used my iceaxe. My inverted vee with traps is 16.5 m long (due to the fact that the inductance of the traps prolongs the radiator) plus 2 m of rope on one end. I had to cross the summit to find a good spot for mounting that end.
At ca. 13:22 / 12:22 UTC I was on the air and heard a station calling CQ on 7.030. While trying to make a contact, the signal went away. I tried QRL? a couple of times. I then noticed that another party who had arrived on the summit in the meantime had simply taken the remote end of my inverted vee out of the snow, so the antenna could not work and I was lucky it had not killed my finals. I reinstalled it and called CQ at 12:30 UTC. By 12:33, I had logged my first contact with ON4FI (Karel), who was also kind enough to spot me. DL3HXX followed quickly and also spotted me, mni tnx!
Then, there were a lot of stations calling, some too fast, but in general, people behaved very well in the pile-up and requested my call for QRS. By 12:54 UTC I had bagged 8 QSOs and received the final order by my fellow skiers to pack up. Five minutes later I was on my way down.

The fourth QSO was completed 12:43 UTC, so in theory, I could have been done in 26 minutes, and likely less than 20 minutes had the other folks not destroyed my setup in the first place.

I am very sorry that I could not work all chasers; at times, there was a lot of QRM, and after 30 minutes on the summit, we had to pack up and get home because the danger from wet avalanches in the lower parts of the route was very real. I understand that it might be disappointing for chasers who could not get through, but operating from such a high summit in winter is a serious alpine adventure and safety has to be put first.

Below, please find a few images. 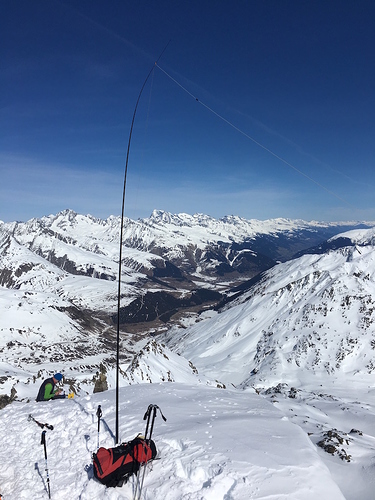 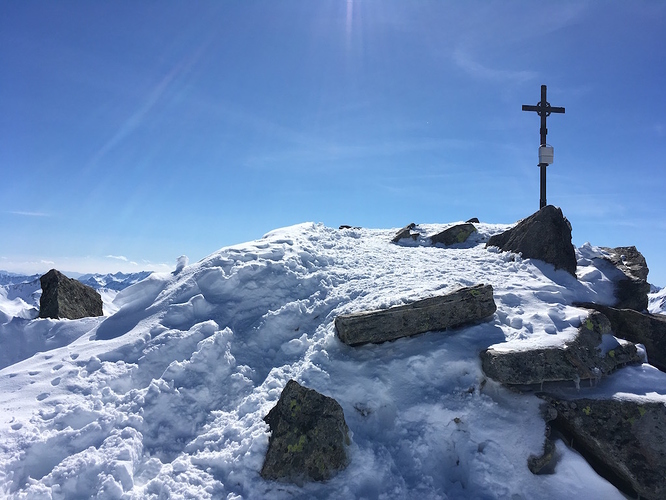 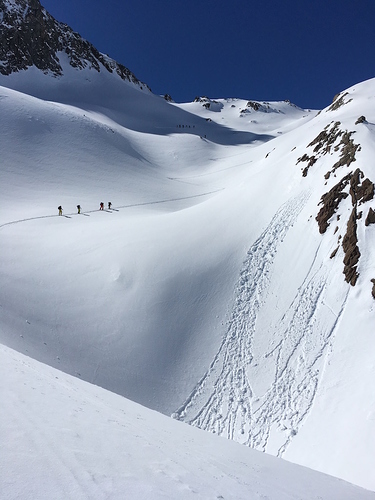 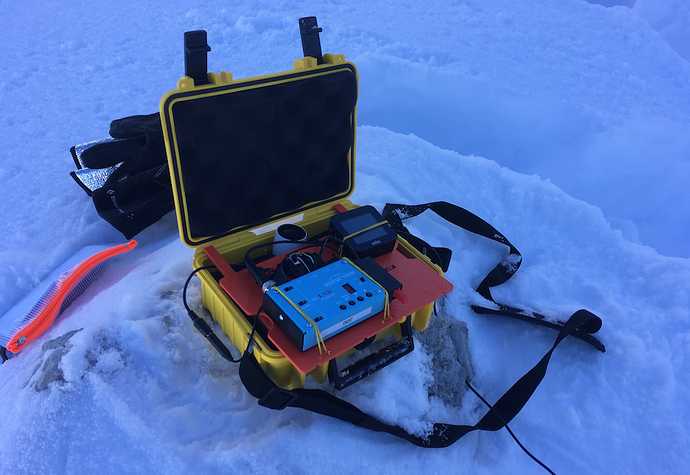 Good work and great pictures! I’m hoping to get out to Europe in the next year for some skiing/mountaineering, it would be fun to do a joint activation. Keep it up!

That’s a great report on your experience on the summit of Badus. Something else to consider including in a trip report is how to reach the trailhead and what the climb or hike is like, and perhaps what one finds on the summit that would help or hinder an activation. For those that may activate it next. Trip reports can be linked to the SOTA database for everyone to find here: http://www.sota.org.uk/Summit/HB/UR-042.

Small, light, and quick to set up is something that Fred-KT5X has been working on for a while now. Here’s his description: The HALF KG multi-band HF Challenge.

That’s a great report on your experience on the summit of Badus. Something else to consider including in a trip report is how to reach the trailhead and what the climb or hike is like, and perhaps what one finds on the summit that would help or hinder an activation. For those that may activate it next. Trip reports can be linked to the SOTA database for everyone to find here: http://www.sota.org.uk/Summit/HB/UR-042.

Thanks for the suggestion, just done!
Martin