After some terrible weather and a period when both cars had some problems, I finally found a slot to get out. I wanted to play on 13cms so select a hill that should be workable and also as the WX overnight and later is meant to be quite heavy snow (again), I didn’t want to drive to the moon and back. Culter Fell near the town of Biggar was the choice. I’ve not been up this one since 2012, though it doesn’t feel like 6 years ago.

I did the same route as last time, driving the 7km to the dead end in Glem Holm by the Homes Water. I parked up just before the “no parking past this sign” and kitted up. The sky was mainly blue, skylarks were signing so it was obviously spring apart from the fact it was Baltic cold and and there was fresh snow everywhere!

The climb starts out with a 135m ascent in 450m or 30%. After 200m of waking this warms your legs muscles nicely. I expected that after little walking to be useless on the hills but that damn rowing machine is doing a good job. I’ve warn out a set of seat rollers after only 4100miles of rowing! So I was able to get up suprisingly easily.

My first view of the target after climbing Congrie Hill, Culter is on the left. The route goes up the slope in the centre up Glenharvie Moss then along the country boundary fence up to the summit. Rubish ground, not frozen, long grass and boggy. Boo! 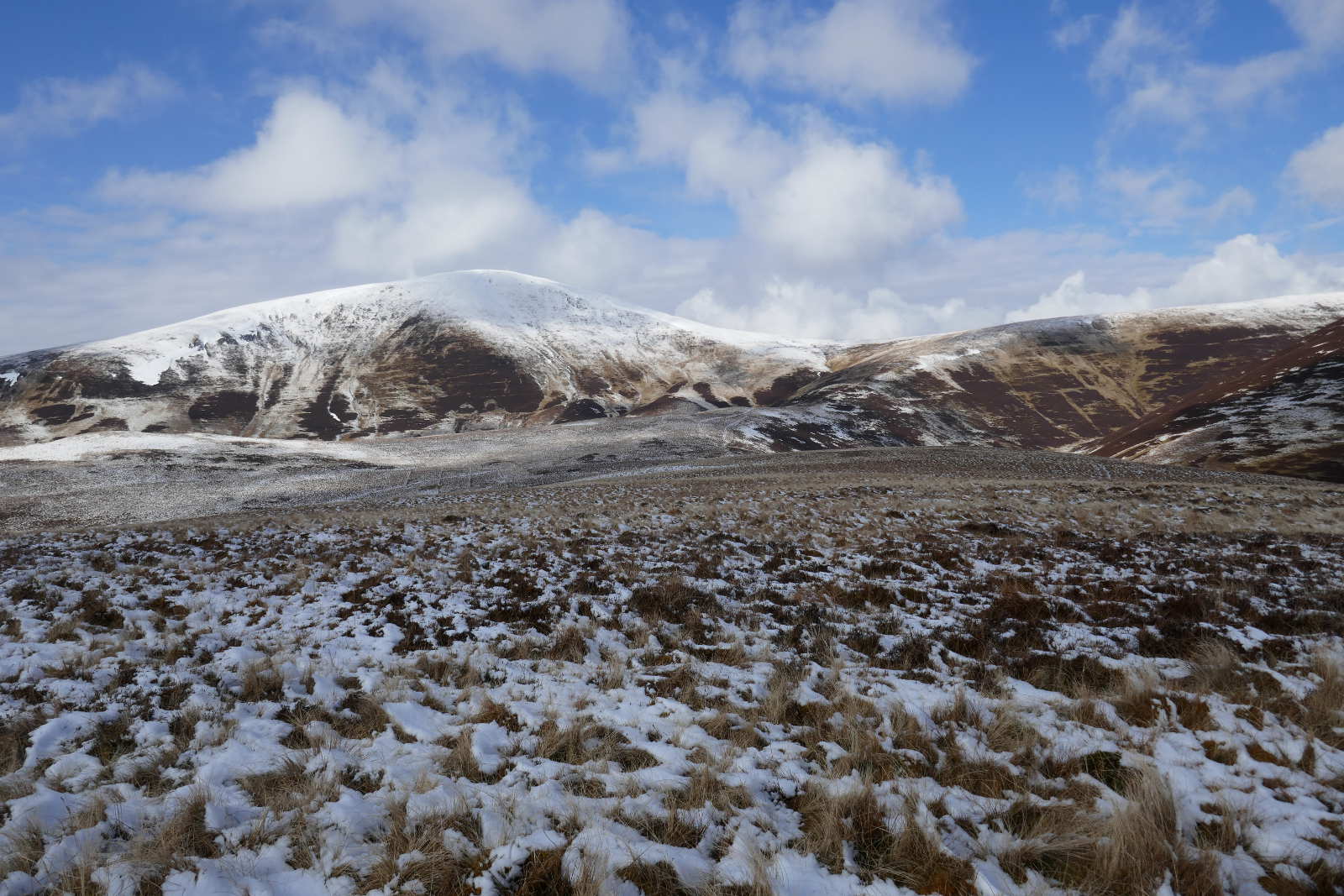 Pushing on and finally reaching the bealach, Tinto GM/SS-064 looked well worth a photo. 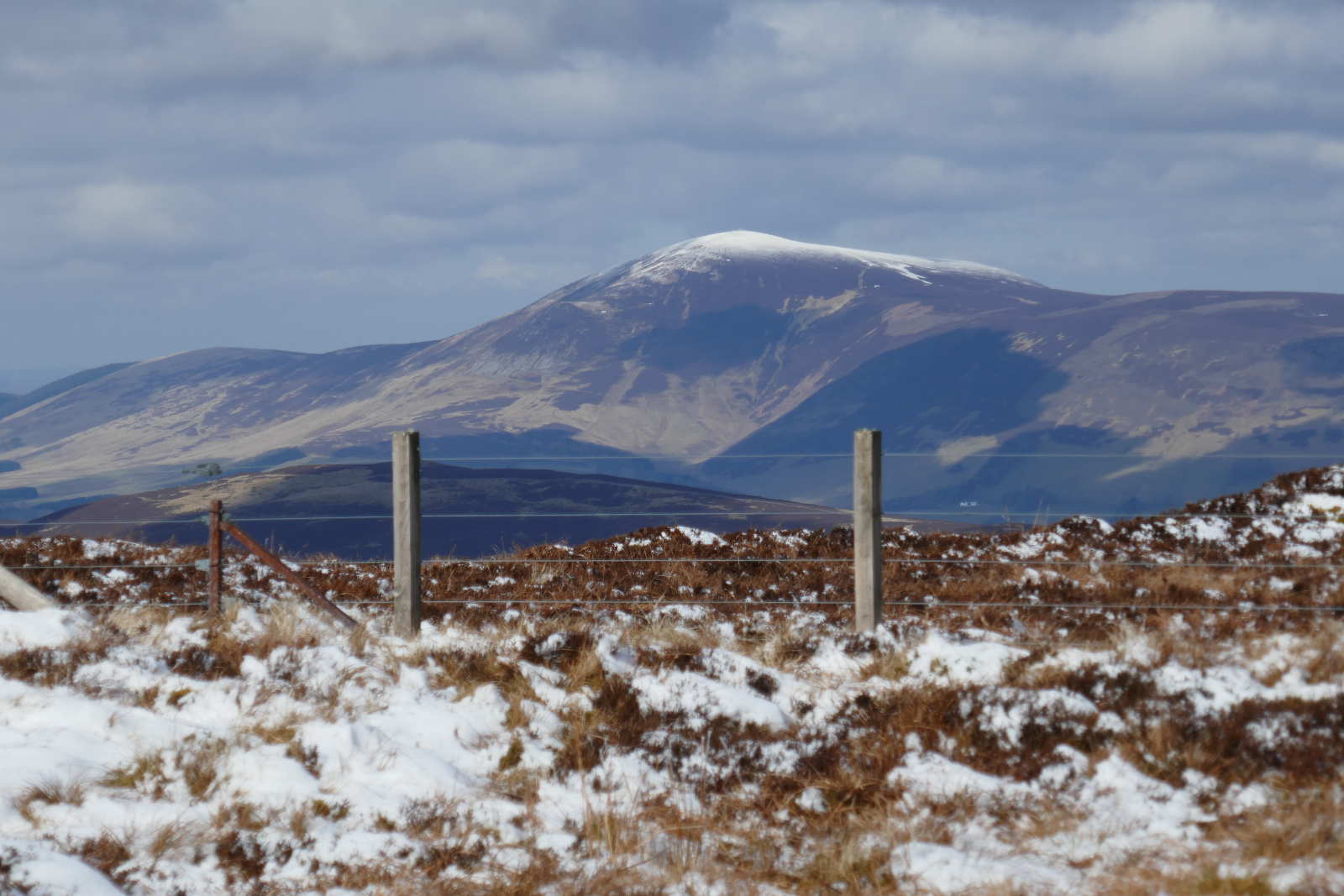 The route back shows the horrible ground, but the view wasn’t bad. 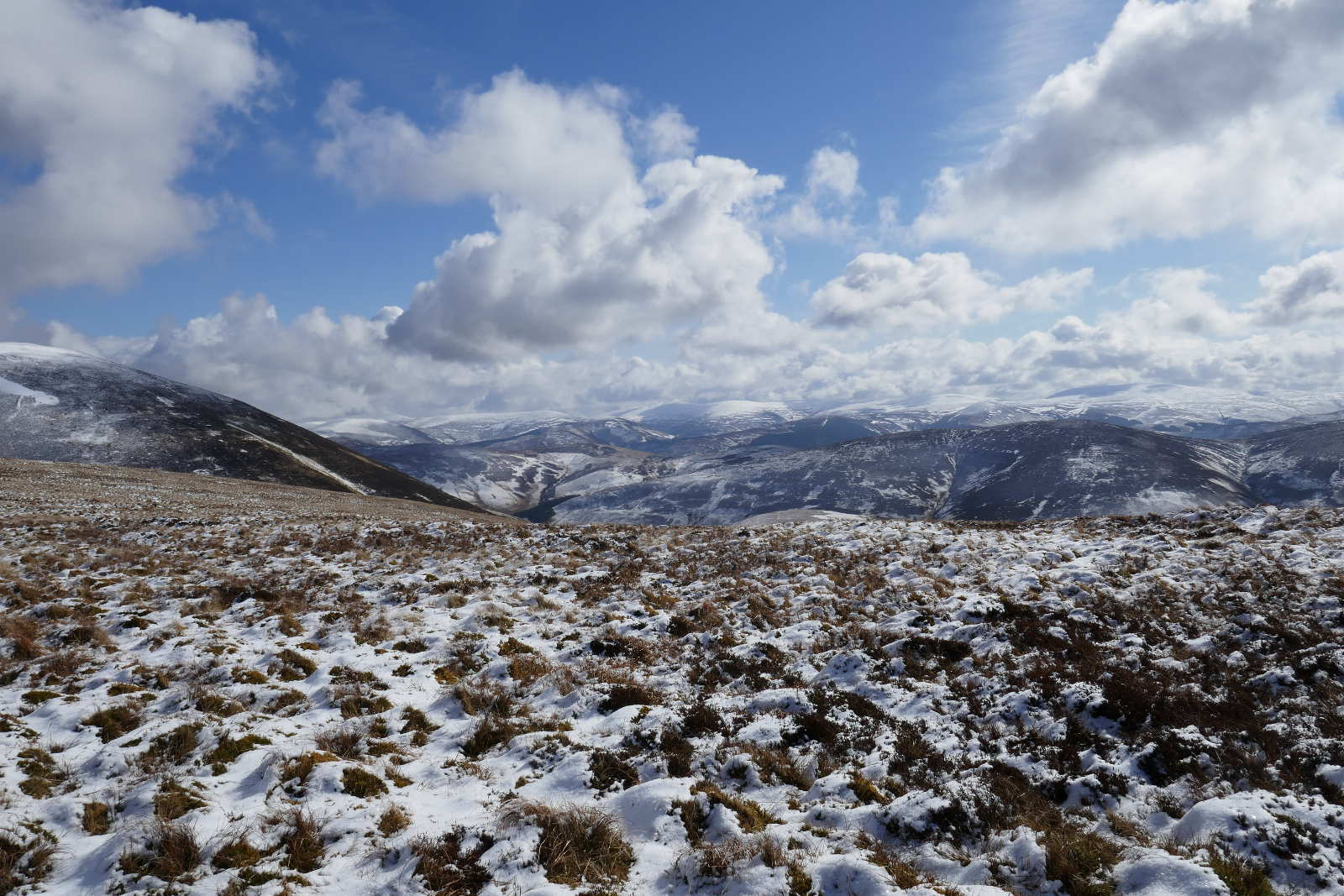 Are we there yet? No, another 150m to climb in 750m, so that’s 25% or 1 in 4. Snow getting thicker. There’s a very smooth white patch, it was a huge area of icy solid snow. Don’t know what’s happening there. But I avoided it on the way up. I did have my crampons with me just in case. 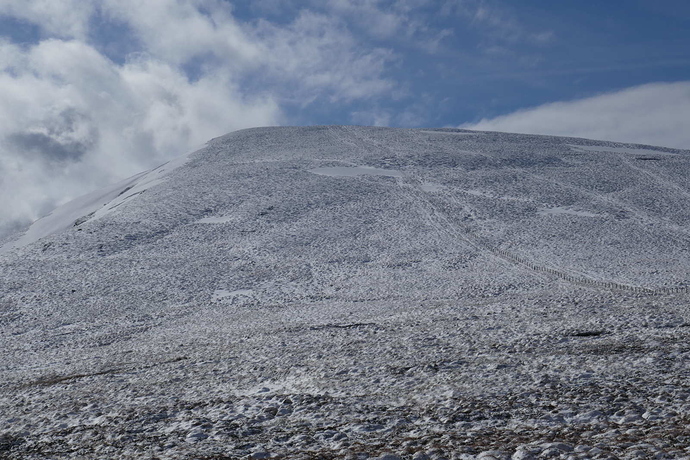 The unzoomed shot, if you climb the common route from the reservoir you climb up the ridge descendig to the right. 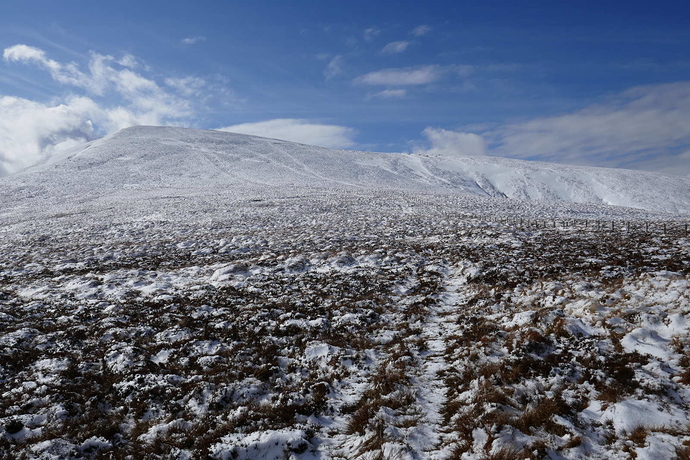 At the top, setup was easy but the breeze was cold but not strong. First band was 60m which was working well. I didn’t set up the 13cms gear as I wasn’t sure if anyone would be able to play. Having completed 60m and spoken to Jack GM4COX I started plumbing all the bits together, Jack was ready and listening 2320.200 and 145.400 (a sort of defacto SOTA working frequency in GM now).

Here’s the new double-double quad on the pole. Doesn’t look very well aligned because someone forgot to complete and test the mounting method and only half of it was there, needs sorting for next time! 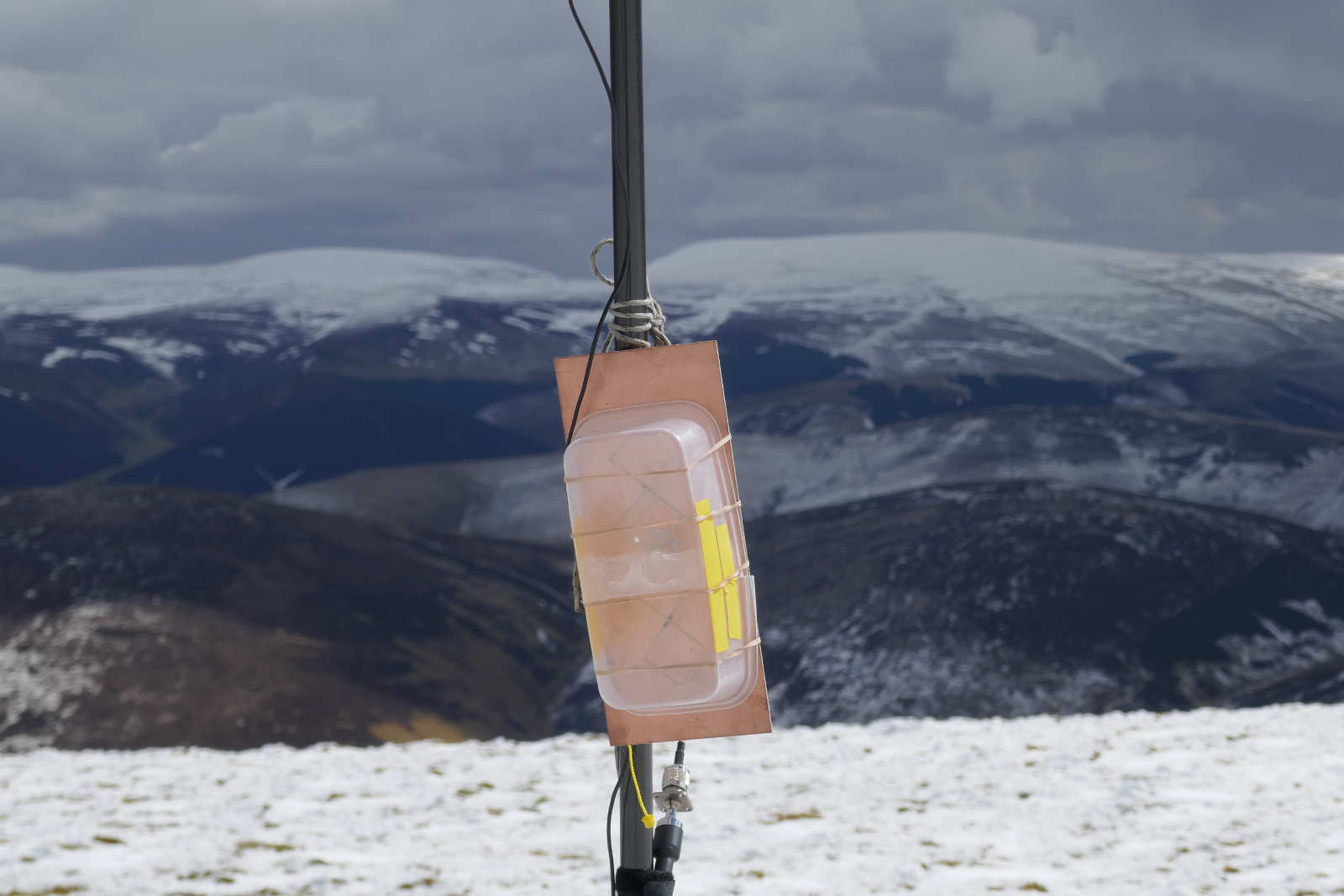 GB3CSB was painfully loud and so I started calling Jack on 13 and 2. Yes Andy, that means put the 817 onto 432.200 not 144.200. OK, fixed and call, call and there’s a very strong voice. Hey that’s not Jack. Some interloper is calling me and trying for a random QSO on 13cms. After the shock I worked Paddy 2M0IPO in Glasgow who was 59 and all the pluses you want. A complete shock and very, very pleasing. Jack appeared not too strong, not an optical path, but a touch to the antenna and he was 56-58, that’ll do. Finally Robert GM4GUF appeared. He was running 10 or 20W (he can’t remember) to a 25 ele Yagi and as he was only 12km away, he was very loud.

There was graupel falling so I took a few photos and packed away the 13cms gear before trying 40m CW.

Here is neighbouring SOTA summit Gathersnow HIll GM/SS-077. A little remote so not activated that often apart from recently when every man and his dog has been up it. 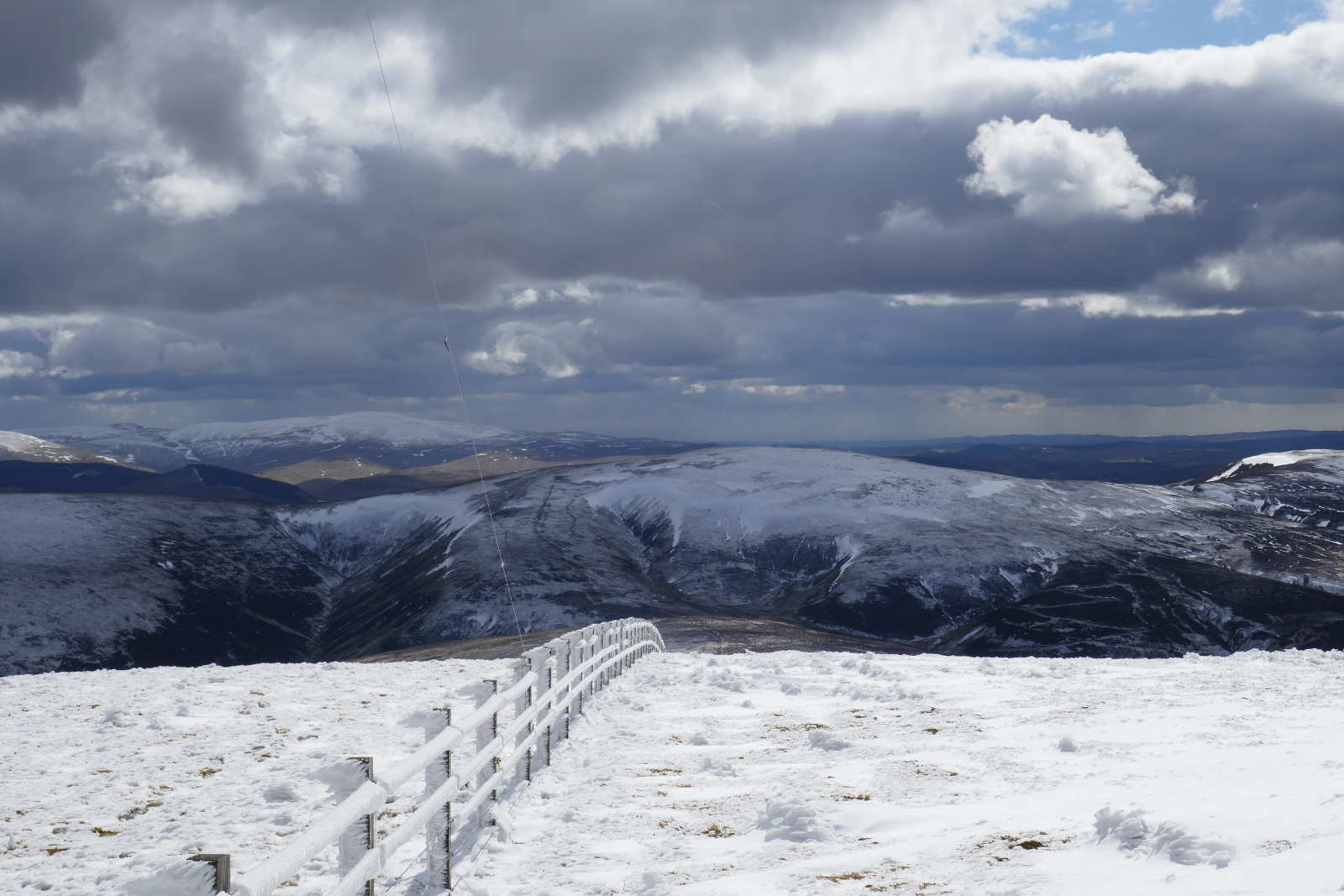 Here a view of the whole station, the trig point is 2 fence posts to the left. 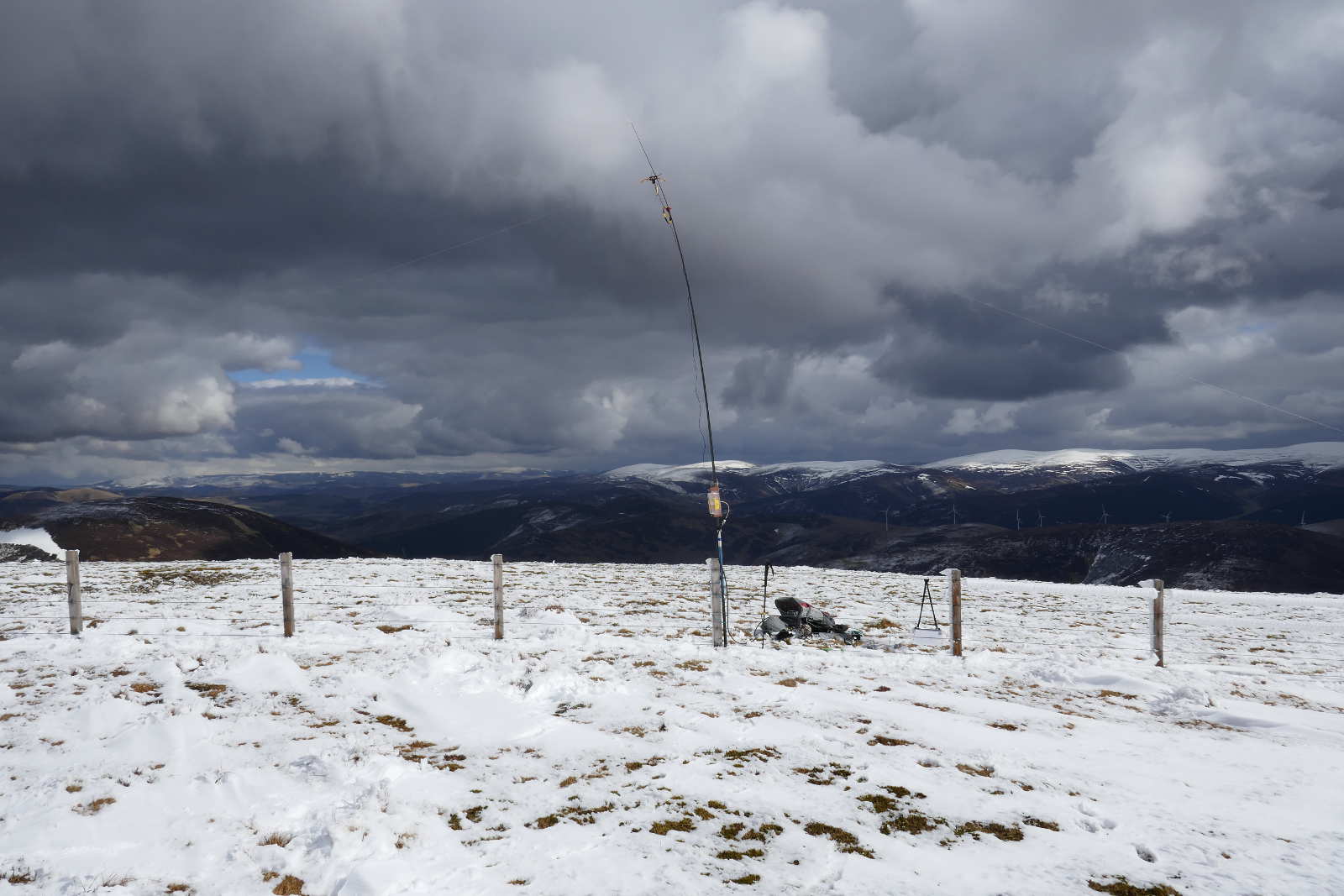 After the snow and rain in the night, the air was very clear. This is looking North to the Grampians around Crianlarich area. You can clearly see Stob Binnien GM/SS-002 and Ben More GM/SS-001 (Ben More on the right slightly to the right of centre.) 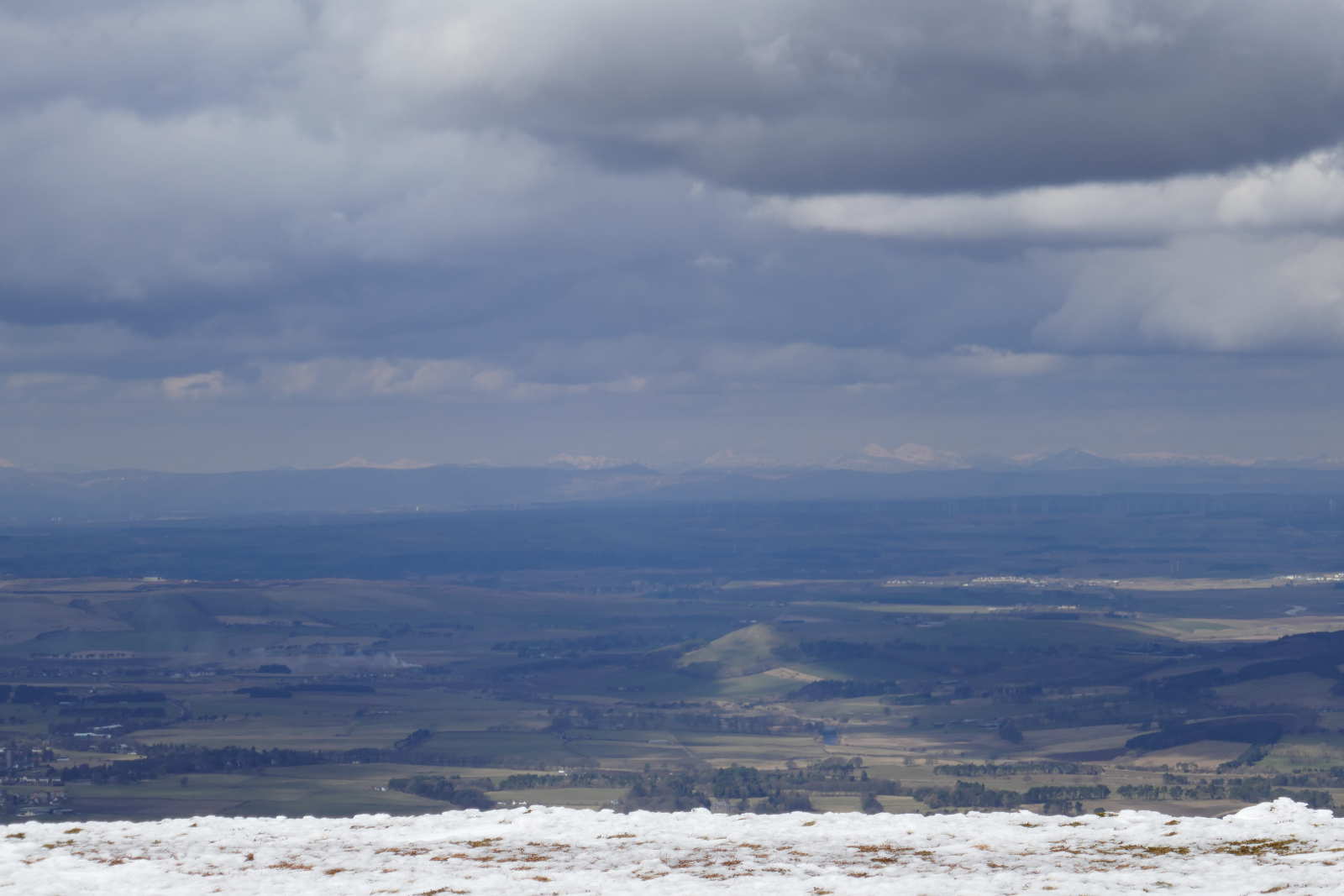 Here’s a zoom of that. The two snowy summits are 113.5km away. The darker summit in front of Stob Binnien is Ben Stachach GM/SS-043

After working a few stations on 40m, the snow got heavy and I could see lots of snow showers coming my way. Time to get out of Dodge. All packed up the route out was the reverse of before. Here is a view to show the summit on the descent. Most of the fresh snow has melted and with the sky now very grey, you can see how different the ground looks. 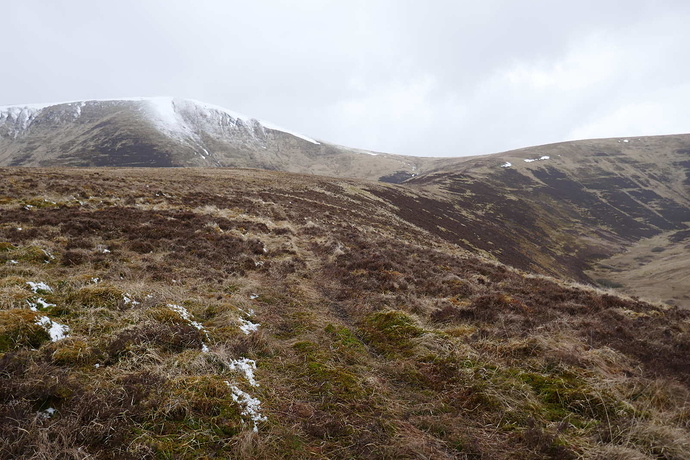 So 3 QSOs with fixed stations on 13cms and 29 QSOs on 60m & 40m. Not a bad day. Computer said 1h30 to the top and it took 1hr45 in the snow. I’m happy with that. 7km walked and 485m ascent. Now that rowing is working because I wasn’t tired or gasping for breath while climbing. It’s only now back home my things are complaining a little. Different muscles being worked.

Thanks for the report and the s2s today…60m was working well this morning.

Thanks for the s2s Andy. Cold wind in S Wales but above about 650m everything was looking lovely plastered in snow. Warm rain today so I expect it will all melt.
73,
Rod

Yes both yourself and Allan were big signals and 60m was playing nice. 40m was very long as I worked OH and EA2 amongst others. I’m still tinkled pink that Paddy was there before Jack on 13cms. Andy GM7DGE was out portable (not SOTA) on 13cms up Eaglesham Moor way, near Corse Hill SS-236, but that would have been behind Tinto HIll, which from the pictures is quite an imposing lump!

Warm rain? We have heavy snow predicted for later.

Nice to be out again and on the microwaves though doing up SMA connectors in snow is a total bitch. Now having shot up 10ug of magic drugs, it’s time for that damn rowing machine again. Boo!

Thanks for the contact on 60m yesterday Andy. I need to get on the rowing machine myself, physio says my quads are non existent ! Too much sitting in the shack chasing…
73
Sid MI5UTC

Rowing machines? You’ll love it and hate it. I average 5km every weekday in 15mins. It’s got to the point where I feel guilty if I haven’t been on it for a session. Wake up, get up, inject, shave, row, shower, porridge. I sit on it and strap in and the loathing for the machine is already running high. 15mins later I feel recharged which seems perverse because I’ve been exerting myself.

The sky was mainly blue, skylarks were signing

Obviously the wind was so noisy that they couldn’t be heard, so they used sign language!

Sorry to miss you, the dog wanted to chase rats, she escaped by tunneling out under the fence, so I first had to recapture her, then block the escape route. When I finished you were on “no chance” bands!