So it’s Blackpool Rally time. For me this a chance to catch up with all the SOTA activators and chasers at the rally, buy some bits and bobs, stay with my mum for the weekend and work some English and Welsh hills. This year my sister was over from France so my mum was double pleased, both her delightful children bossing her about and drinking her hooch!

To break up the boring 4.5hr trip down the M74/M6 I like to try and do a nice hill part way. Last year I did Cross Fell on the last day of the Winter Bonus for 11 (quite easy) points. I remember commenting that it was a bit of a pimple for 8 points. Anyway, this time Cold Fell had selected itself. It’s not activated too often possibly because it’s a bit out of the way of the main NP/LD zone. Anyway, the drive to the start and back to the M6 didn’t add much to the journey so this was the target.

As I normally do HF operations and struggle for 2m FM contacts I intended a 2m only activation. Last time I tried Cross Fell I did 2m only and it was a bit of a struggle to get contacts. So for Cold Fell I had the full HF gear and my VX-170 for 2m and a full 23cms setup. Though I didn’t expect any activity on 23 really. I called in to a supermarket on the way so I had a stock of BLT sandwiches and some other treats. The WX at home was fabulous so what could go wrong…

OK well 10 miles from home I was in thick mist, no problem this will all burn off. Then off across the moors to pick up the M74 at Abingdon. Hooooo, all stop and hazards on. An eejit in an Alfa overtook without looking and clipped the car in front of me. Lots of brake lights and ABS and many drivers were checking their pants

No real damage but that was almost a head-on crash at 50mph each way. Luckily I had a bigger gap than normal due to the misty conditions. 20mins delay whilst people pointed and gawped.

I picked up the time on the M74 and so I was off towards Longtown and Brampton. What a goegeous part of the world. The mist had gone and the sun was hot enough to demand the AC on in the car. AC in April in Scotland, never! A guess of which roads to take and so I was on a narrow lane leading to Forest Head. I parked in the same place Tom M1EYP used, out into the sun and start to get ready. There was still lots of mist rolling over the hills but it was thining in front of me. Bag packed with the 3 rigs (that’s 1 too many), sandwiches, water and where are my gloves and hat?

I have a SOTA grab box. In that I keep an assortment of gear, suntan creme, midge repellent, Skin-so-soft, several pairs of walking socks, gaiters, change of T-shirt, spare jeans, overtrousers and the dry-sack. If anything is used, it goes in the wash and is put in the box when clean. The 817 and HF gear lives permanently in the rucksack along with survival stuff. So for an activation I need to charge the SLAB then grab the rucksack, the grab box, boots and pole and I’m done. The whole point is all the gear lives in the box if it’s not in the rucksack and there’s always spare stuff too. Simple system, lob everything in the car and select what you want at the car park. That way you don’t FORGET YOUR HAT AND GLOVES! Grrr, they were in the wash still. Luckily the summer hat was in the box and today was hot and sunny, at least 18C so I didn’t need the walking hat and gloves. And I have a spare pair of heavier gloves and hat anyway. Still this lack of attention to packing comes from writing reports for work at midnight the night before.

So remembering Tom’s comments about turning left, off I set and promptly got lost at the next gate. Check map and see the marker pole in the field with a yellow arrow on it. Across some grotty land and up towards a nice house. It looks like you are walking in the garden (and you have silly rules about access in G we don’t have up here) so I was worried till I saw the road. Turn right and down to the cottages at Howgill. I guess it’s a 1.5 kms to Howgill and I was hot and sweaty and I was going down most of the way! Through the gate and then which path? Take the one on the right and go straight up the green lane. It’s quite steep and gets steeper. It was still hazy but the view was good. The path is excellent although it gets a bit less obvious higher up.

Up and up and up and up and… you get the idea. It’s steeper than I expected but it was a fabulous sunny day so who cares. The only problem is I still have 3hrs or so of drive after I finish this. Time to up the pace. It was a shame I had a black top on as I was seriously sweaty as there was little breeze. Up to the end of the path which is near a shooting box, no path now at the col and what do we find on peaty summits at the col? Yes, boggy ground. It’s obvious where you want to go. It’s just that there’s no path and the ground is grotty. So follow the FMF maxim, when in doubt dither and scratch your bum. Er no, head in a straight line for the target. After about a 100m a sort of path emerged and I followed that for probably about 400m, just enough to loose site of the shooting box. The path improved a bit and near some remains of a building I found the fence. I’m sure I read to follow the fence and it went the right way so of I went.

Now according to the map there’s not much climb left or distance to go. But it seemed to take an age before the cairn and trig appeared. 1hr 35mins elapsed from leaving the car. Not bad really considering the sun. At first I thought there was another activation on as I could see what looked like a SOTA pole at the trig. Actually it’s a 2in ally pole that would make a great mount for a dipole if it had a pully and lanyard. But it doesn’t. So J-pole onto the fishing rod and that wedge between some stones. Feeder into the SMA to BNC adapter and onto the VX-170. Drink, sandwhich, comfort break and CQ SOTA.

I decided to use the VX-170 as I had a charger with me and no charger for the SLAB. With a possible HF activation the next day with Brian G4ZRP, I didn’t want to use the 817 if possible. 1st call was answered by Derek G1ZJQ who obliged with a spot and a cheeky comment after I pointed out it was a little further than I expected. Nice one

This was followed by a nice lightweight pileup. It was nice to use such simple gear, J-pole and handy. Lots of HF regulars appeared. I was very pleased to complete the set of NP summits for Geoff G4WHA who had been waiting for NP-020 since at least Nov. 2007 for this one. I was pleased with the number of contacts on 2m and managed two S2S contacts, one to a WOTA hill (whose ref I didn’t log) and another with G1JTD/p who was on NP-015. Only 8 contacts but I was impressed for a Friday lunchtime using only 2W into a J-pole in part of England with a very low population density.

I saw the time had marched on and so time for a few photos, mainly of me and the trig as it was too hazy for a good scenic view. Then time to packup and head down. Even though I had a small station set up it still took long enough to pack up as I managed to get just about everything out of the bag in 55mins I was on the summit! Thank heavens for the summit shelter and my summer hat, I was able to stay out of the sun. Just as well because even with them the bald zone (a vast desolate area of scalp devoid of hair) was quite pink later on. The route back was simply the reverse. I wasn’t going to try for some circular route simply because I didn’t want to end up off Access Land and some GOML’s fields.

Back at the car it was time for some more sandwiches, a change of T-shirt and 10 mins chill out before making back to the M6, Tebay Services (Farm shop and a nice coffee) a bit of a wash and slow journey South in the start of the rush hour.

This hill is a splendid hill and it deserves to be activated much more frequently and it’s an easy 4 points compared to some of the GM hills. On a clear day the views must be spectacular and I bet it’s a belter when the ground is nice and frozen, especially with such a good shelter on top. Activators of England, you need to go and do this hill. One of the most enjoyable walks and activations I had in a long time. Really, even with the vast choice of summits in GM, this one stands out to me as one to do again sometime.

Thanks to everyone I worked and to Derek for the spot. There are a couple of pictures in the Flickr group.

Very good Andy. Seems a long time ago now that I did this one with the lads, but seem to remember a lot of driving was involved. Saturday late-ish morning from Macc all the way up there, and then right over to Langdon Beck for an overnight stop afterwards. It was a scorcher for us IIRC.

I agree, it’s a nice hill with a satisfying route, but it is just so far away from virtually everywhere!

In reply to MM0FMF:
Hi Andy

Great report, I like this hill it has a different feeling to the other Np’s.
It’s a real shame that the large cairn with prayer flags has been pulled down. 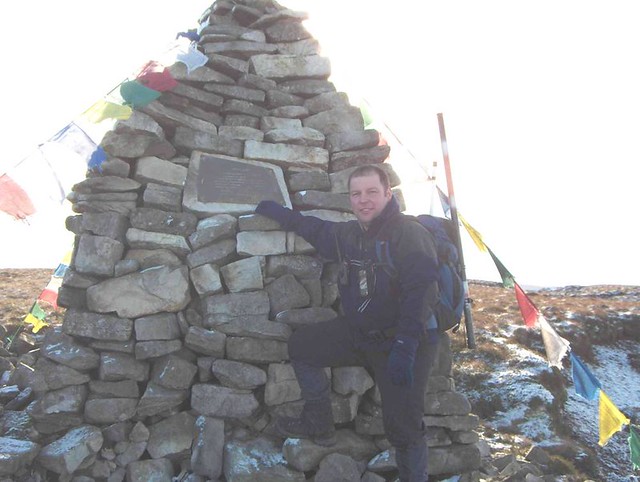 That is a shame about the cairn. Sadly some people do insist it’s their way or no way.

I had a wonderful time up there. OK the WX was great and that helps a lot. But I’m surprised how infrequently this hill is activated considering how enjoyable the walk is and how lovely the countryside is around there. As I said it’s probably because it’s a bit out of the way. I’m trying to do mainly uniques at present but I enjoyed this one so much that I’ve pushed it up to the top of the “do again” list. It cries out to be done on a cold, crisp and clear Winter’s day with the ground frozen hard and a deep blue sky but without the haze that spoiled the view a bit when I was there. All I need is to be able to engineer such WX for the next time I pass by in the Winter.