Blackwood Hill is in that remote part of The Scottish Borders. Some nice countryside but there’s not much here. It’s about 1hr10mins worth of walk and a 1pt hill. The only real reason to do is because it’s there, it’s just not special enough to go out of your way to activate it. It’s what you’d tag on to something else when you are in the area. Or if you want to bag all the hills in a region (or logical sub region). Hence an 85mile trip to bag a so-so 1pt summit. Also the WX forecast was OK for here and wet for many other parts of Scotland. And, I could tag a favourite hill, Belling Hill on later. Ah-ha, a plan.

There are a couple of likely places to park, NY514932 at the end of a passing place by a bench. I looked at this and I’d have blocked enough of the passing place to look like an arrogant parker. The grass was rather long to drive over in my car and the smell of burning grass when it touches the catalytic converter / DPF fills me with dread of an imminent car fire. So I went to NY532938, where there is plenty of space at the start of the track to the old Riccarton Junction Station. I could have driven further as the gates were unlocked and several cars did. From here the route is simple, up the track to the old railbed, turn left and follow the bed to end of the trees, turn right and up until you are at the top, turn right and follow trees to the top. Simples!

It was showering which was not in the forecast but it was warm and humid which was. Also very breezy and damn windy at the top.

On the way I saw this… gentlemen, don’t ask. 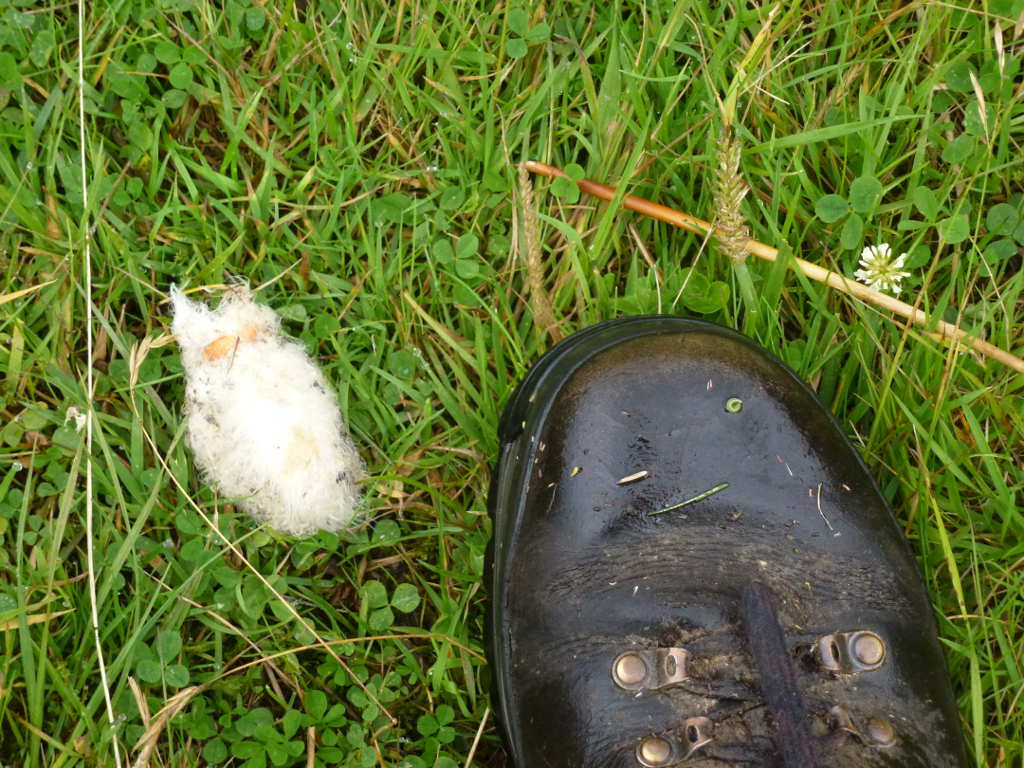 The climb was an uneventful trudge other than it seemed much more humid than I thought. Finally at the top of the main climb you can see down into the next valley and Hermitage Castle (dates from 1240AD). You can see it’s quite a murky day. 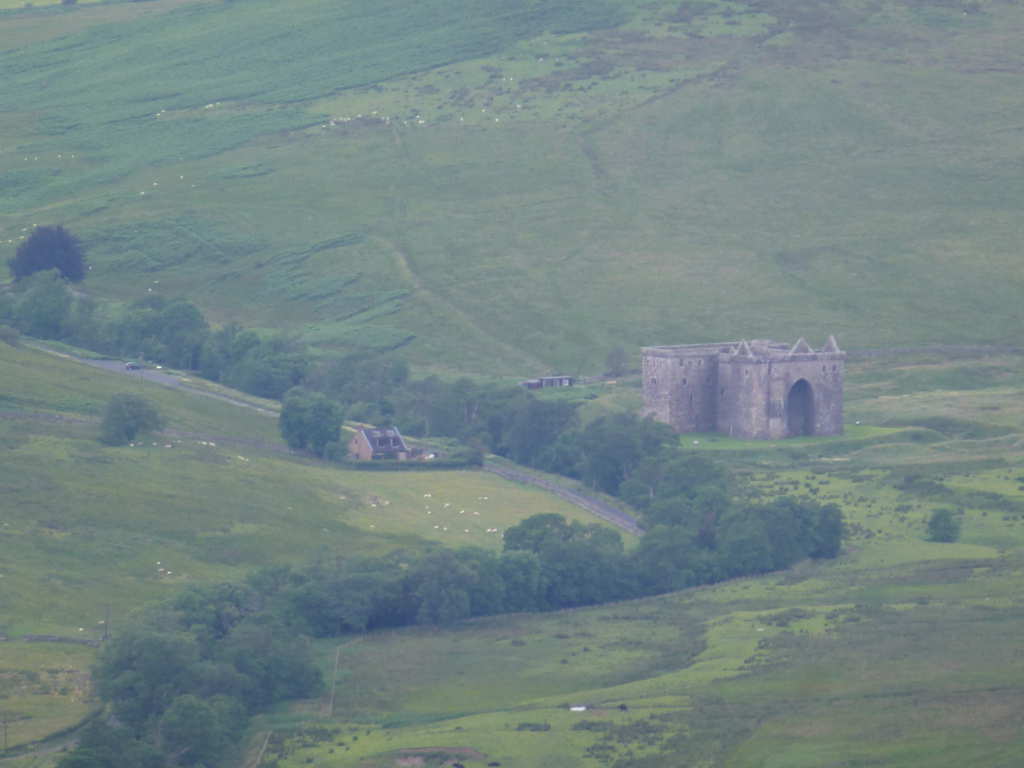 Also I can finally see what Cauldcleuch Head GM/SS-106 and Greatmoor Hill GM/SS-114 look like. They’re not distinctive at all, this is probably one of the few places you can see them clearly. Cauldcleuch the high point on the left, Greatmoor on the right. The bit in the middle (Starcleuch Edge) is a boggy hell TBH. 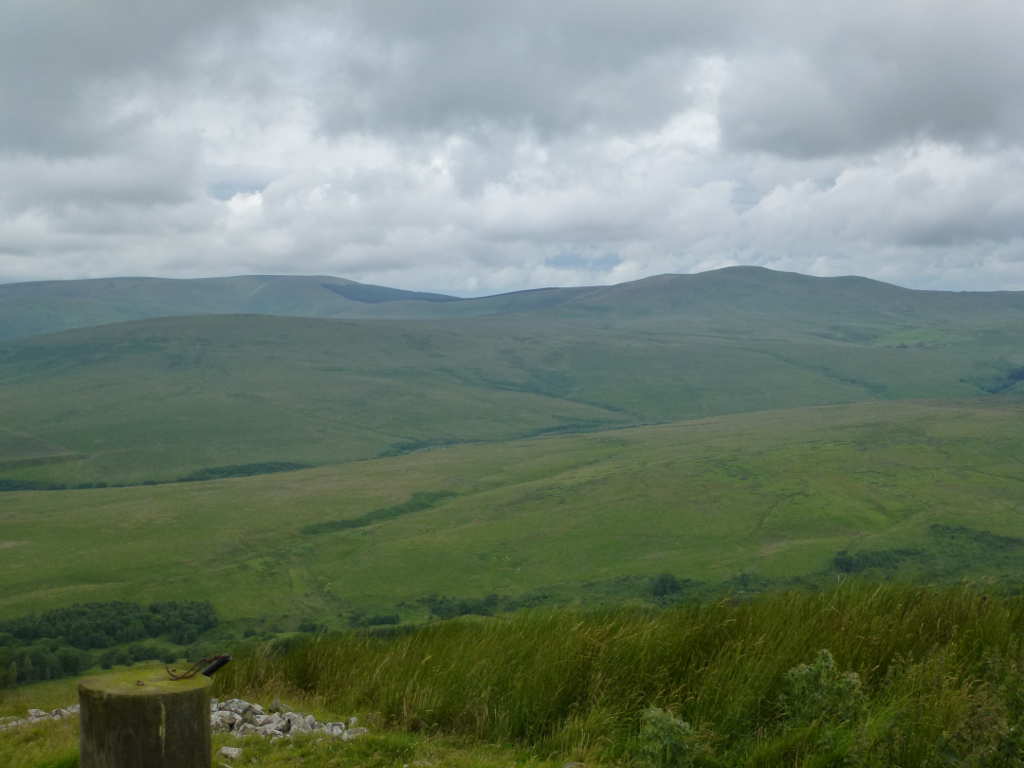 From the end of the main climb looking along the ridge to the summit. There’s a trig but it’s not anywhere near the summit. 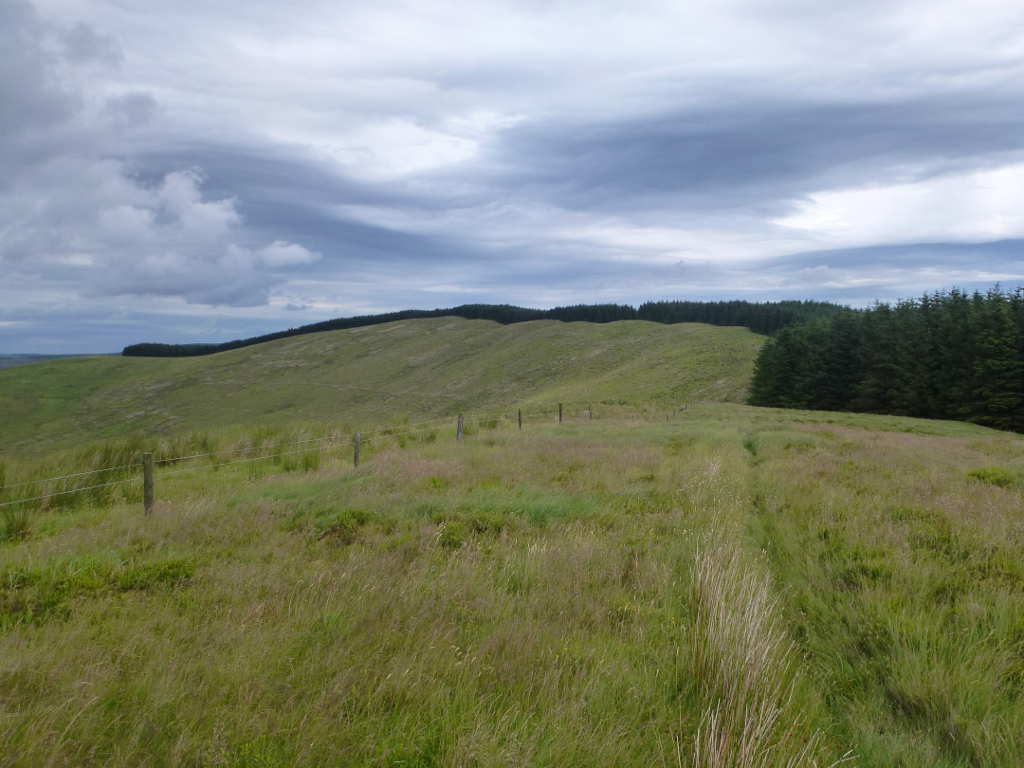 The summit cairn, I set up using the fence here. 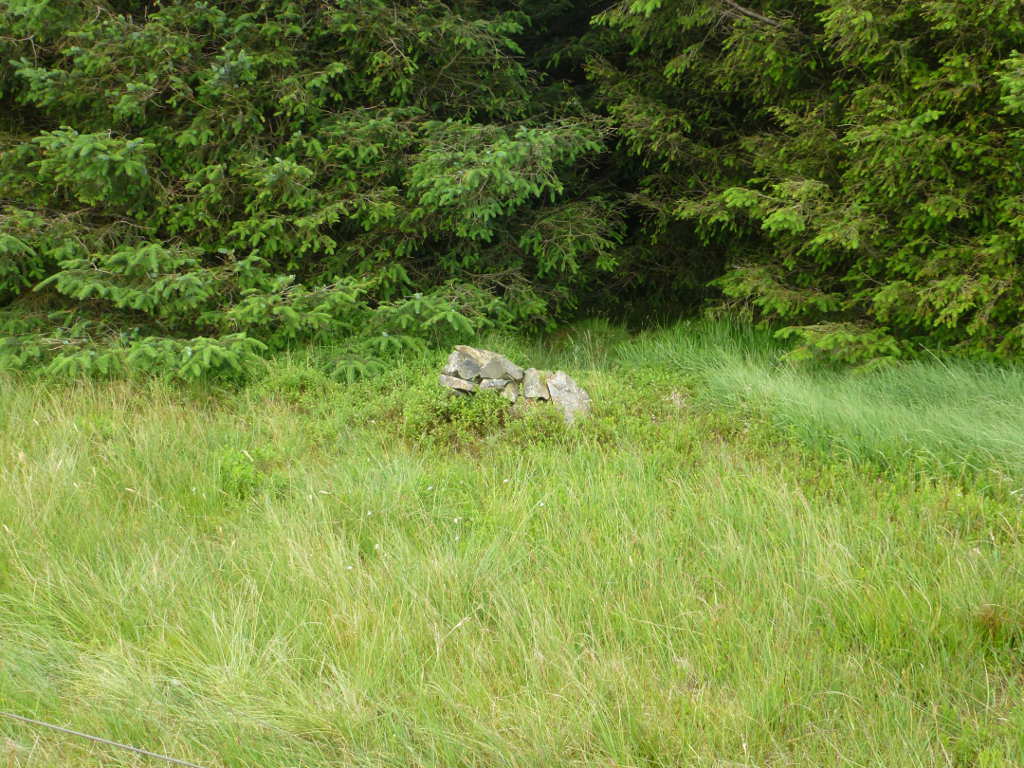 Well the fence didn’t run the best way, it ran the worst way. But it was very windy and a fence is nice to tie the antenna too. This was an electrical fence but I heard no noise from it. Maybe not active. Anyway 60m was dire. I managed a very weak G0FEX and that was that. 40m SSB was full of people screaming contest but they all seemed deaf. I worked an OL station and gave up calling the others. 40m CW saved the day. PA0INA was a good signal and is a regular in my log. In fact 40m CW was the life saver. The only G I heard was G3RDQ down in the far South of the UK. I got up to change the links for 30m but the wind caused another antenna collapse. I said rude words and decided RF conditions were pants and to leave. Return was the ascent route in reverse.

I didn’t plan on any 13cms from here partly because the trees screen a lot the take off and also because this was just across the valley, the MoD ATC RADAR at Deadwater Fell. That’s a Plessey Watchman S-band radar, 57kW of 0.4uS pulses to a big antenna with frequency agility between 2750-3100MHz. I’d expect some “interference” on my transverter even at 400MHz away. Hell I can hear my neighbour’s Wifi across the road, 800MHz away and I don’t think my neighbour puts 57kW in to a big dish 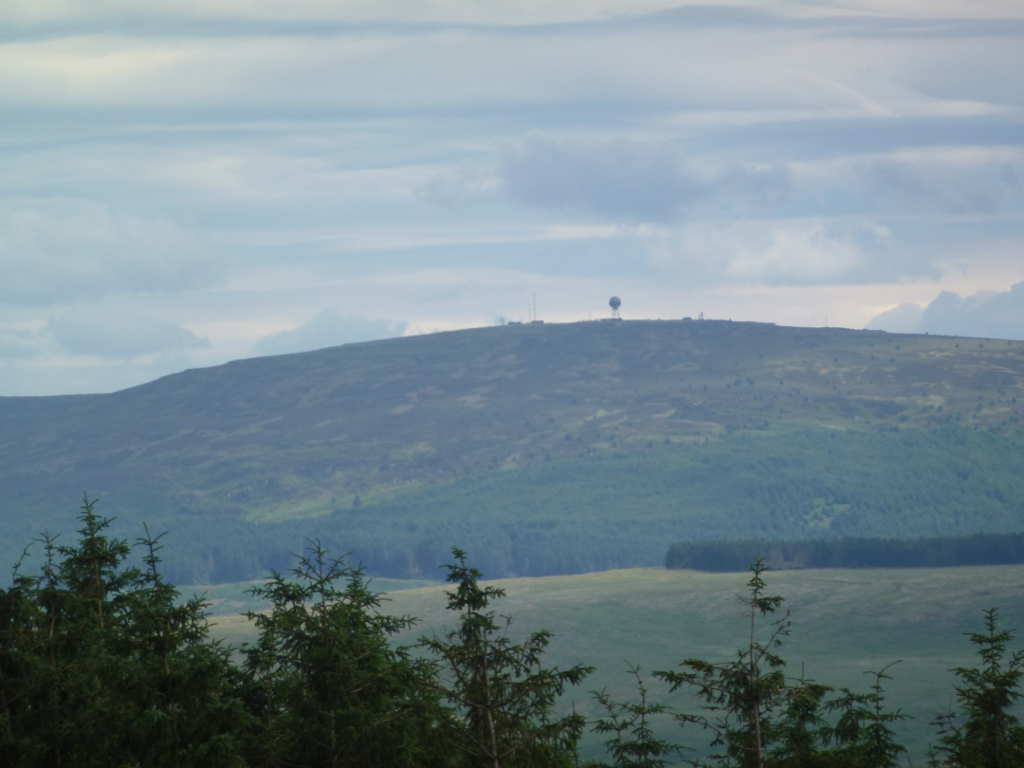 I was only 6km from England here. I didn’t see any Sassenach’s sneaking across the border to steal our excellent WX to take home

So not the best of activations, I got my points but I actually like working lots of chasers as it makes it feel much more worthwhile. But that completes the Eastern part (East of the M74) of my aim to complete all the SS summits South of Glasgow/Edinburgh. Just Benbeoch, Brown Carrick, Troweir, Craignell, Millfore, Lamachan, Craiglee, Fell of Fleet, Blackcraig of Dee and, of course, Mullwharcher. Nearly there.

This is a simple hill. About 10mins walk from the large parking area. A quick walk through some deciduous forest followed by trek around the edge of mature pines to the large felled area where the summit is. It is totally impossible to get lost. You could do it blindfolded in the dark. On top of that, it’s really nice countryside with a few fine and shapely summits and lots of birdsong etc. Tranquil and delightful. For some reason, 14MHz always seems to work well here.

At the car park the flies descended onto my car. Not one or two but thousands. Yeuch! As I struggled to flick them away and put on some boots I noticed the Vibrams tread was de-laminating. Outrage, the boots are only 9.5 years old! I think a good dose of Evostick will fix that. They are my “other” boots but there’s still life in them and amazingly, the Goretex is still intact.

10mins later with a trailing swarm of flies I was at the top. Except it felt wrong. It took a moment to realise what was wrong… the seedlings are trees now. Sadly a lot of the lovely view has gone to be replaced by row after row of trees. However, this time there is a good firebreak and the summit is not planted. Previously (10 maybe 15 years back) it was almost impossible to get to the summit. No HF radio would be possible. 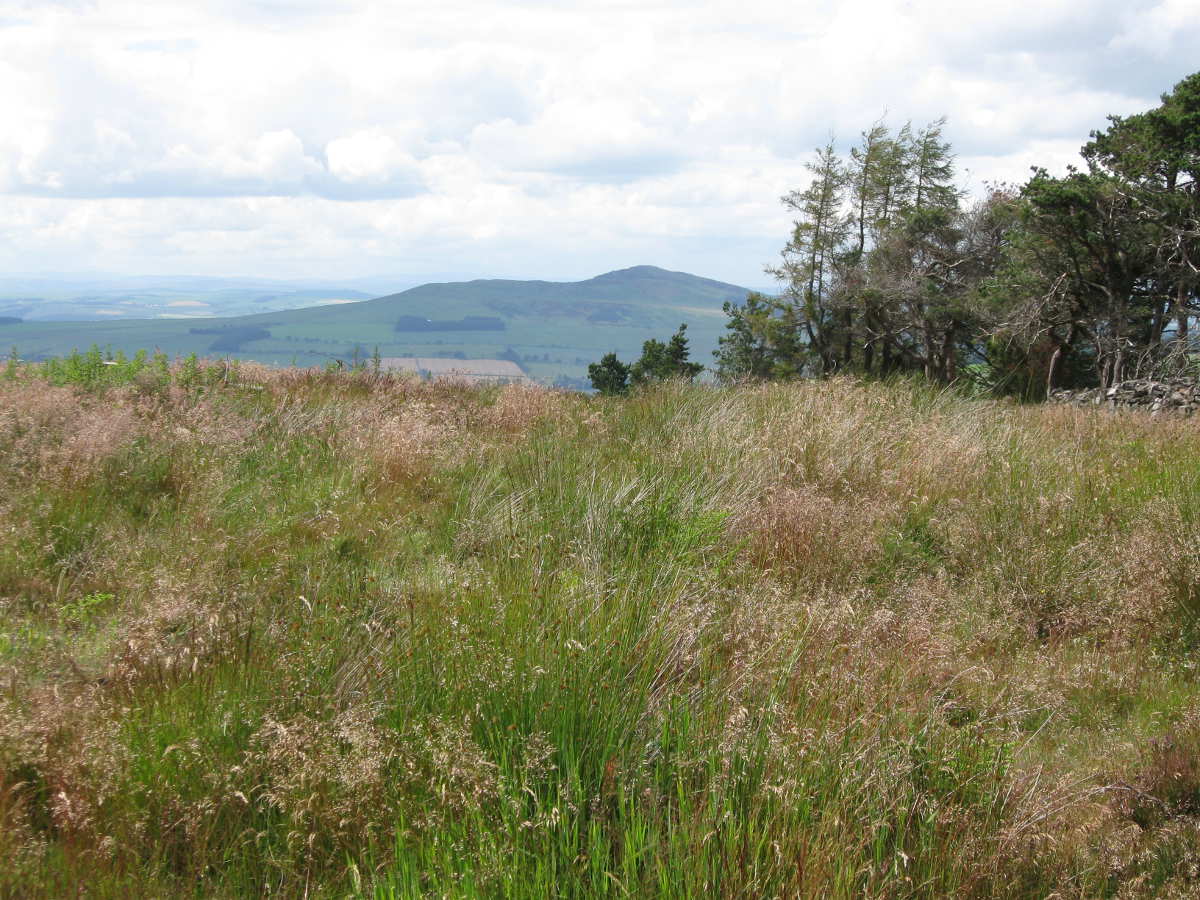 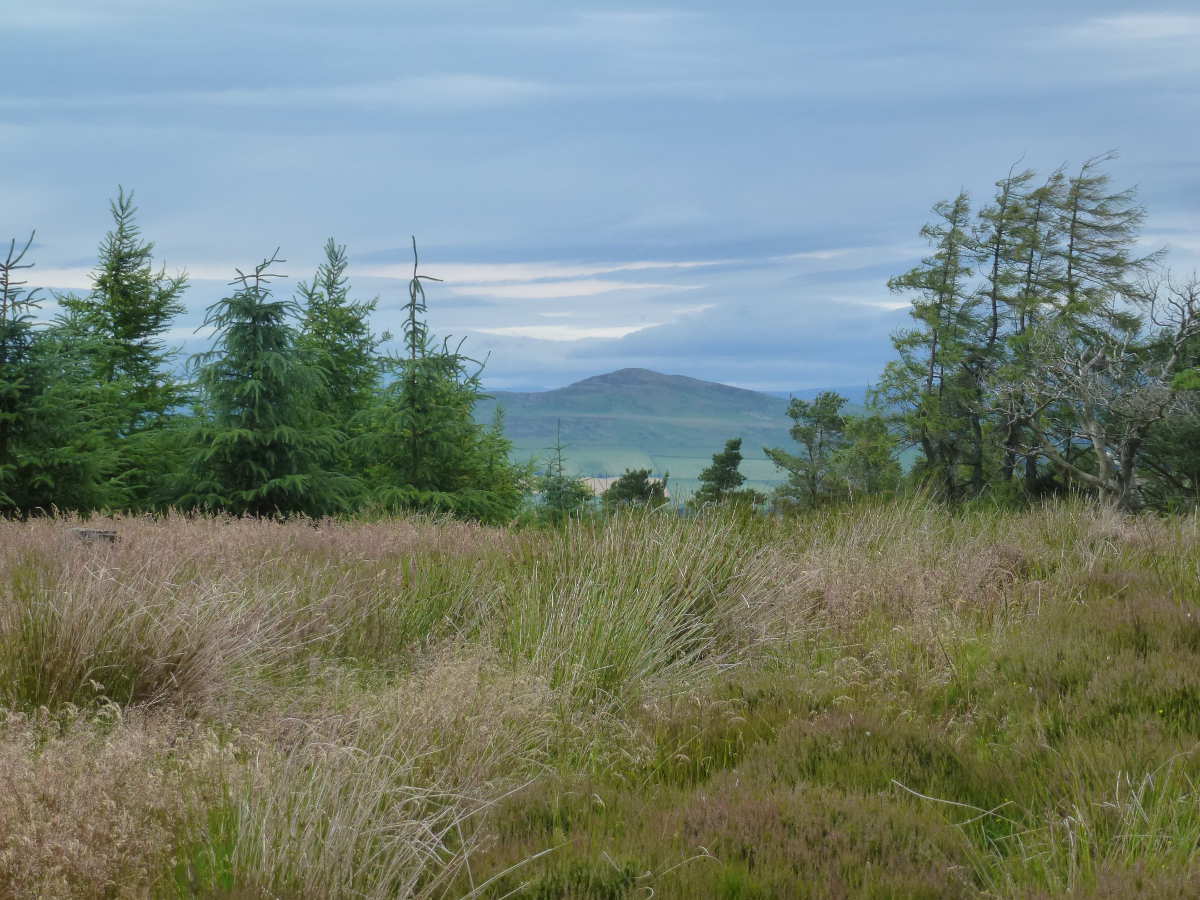 The summit cairn in 2012, the young trees just visible 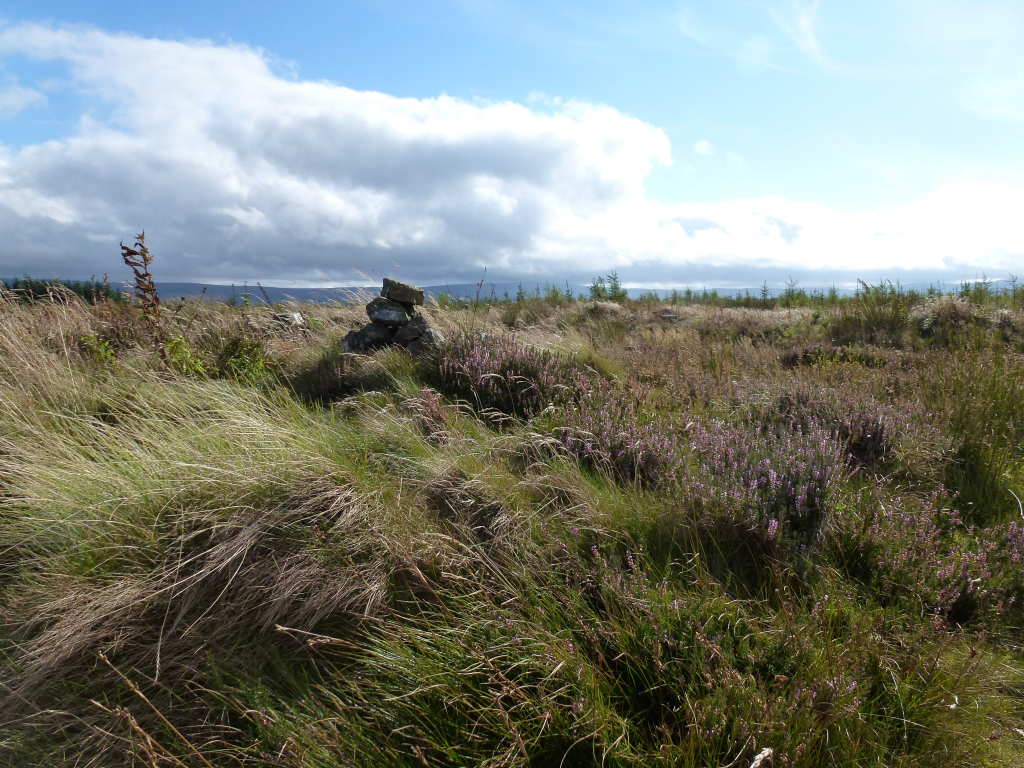 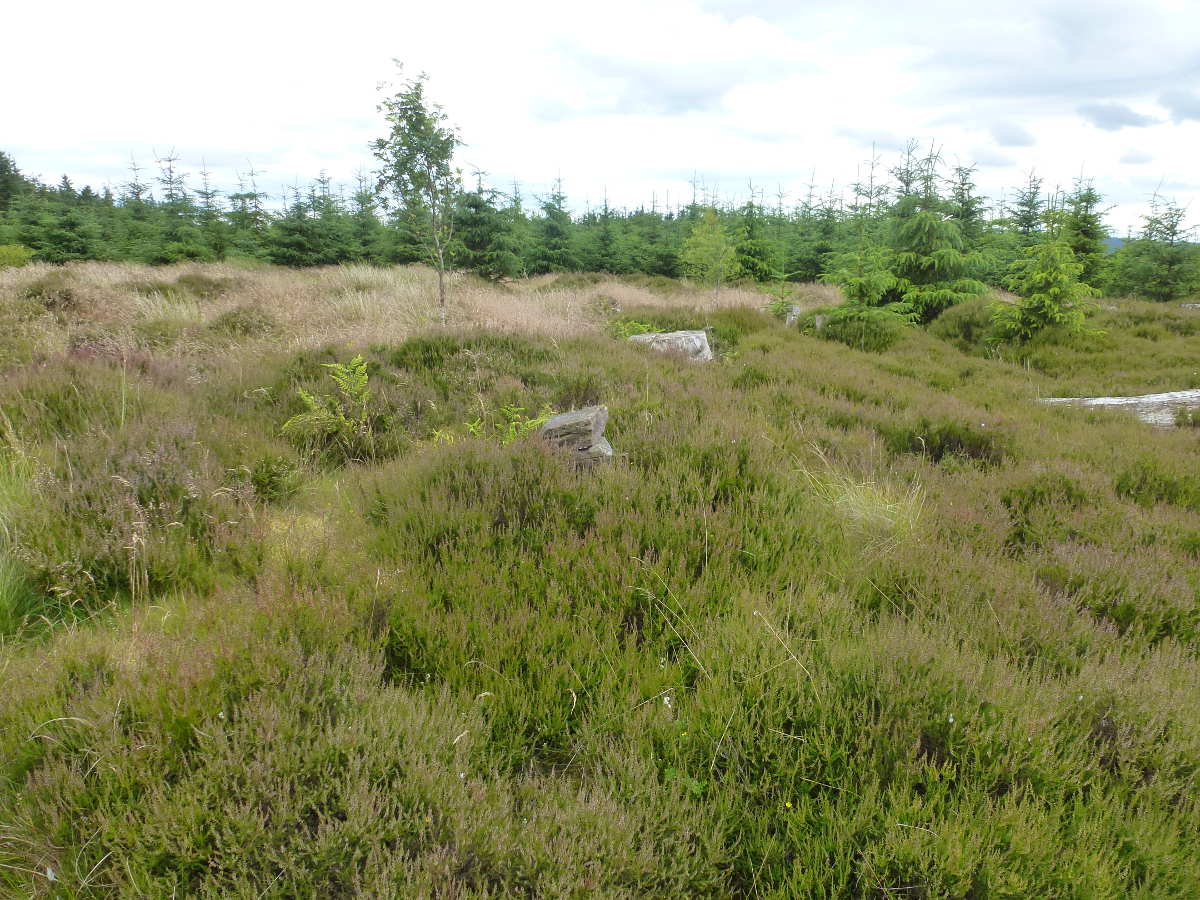 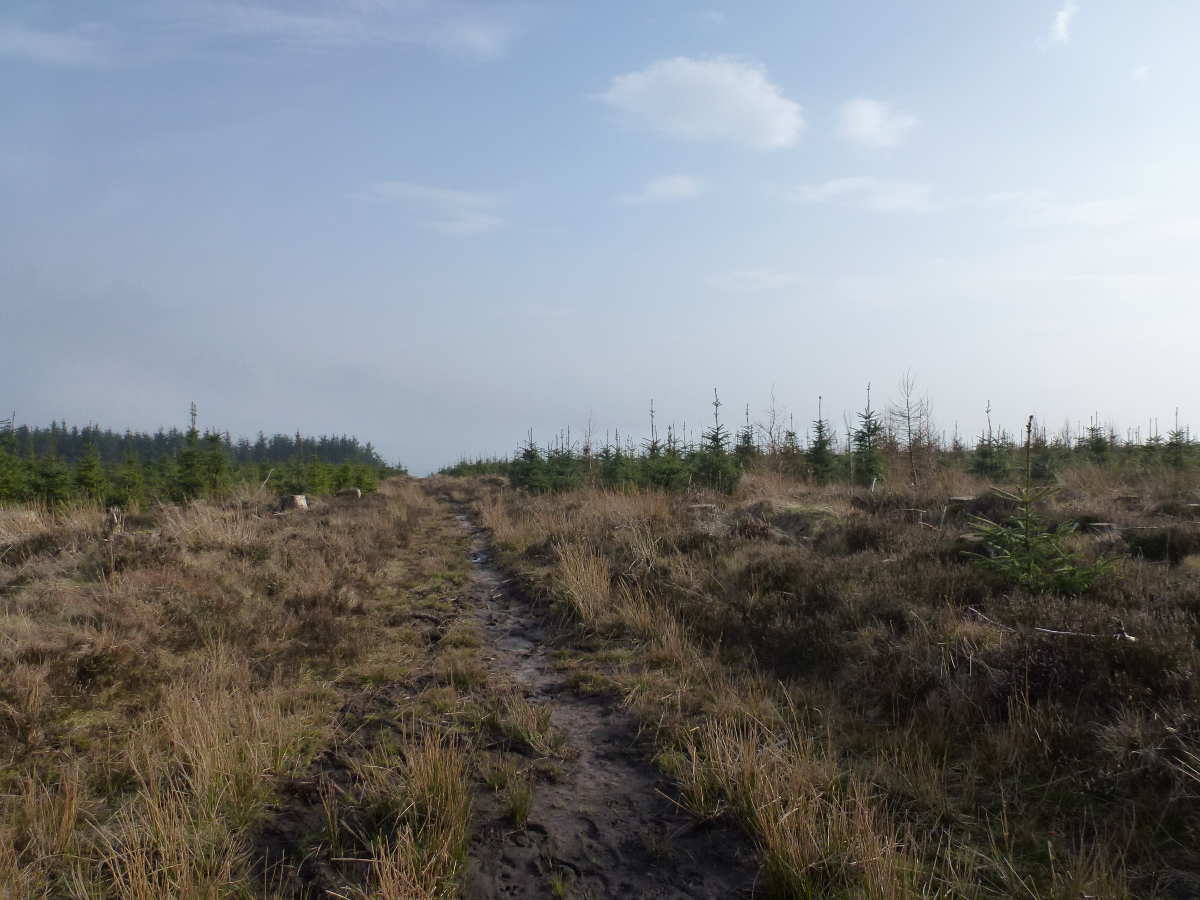 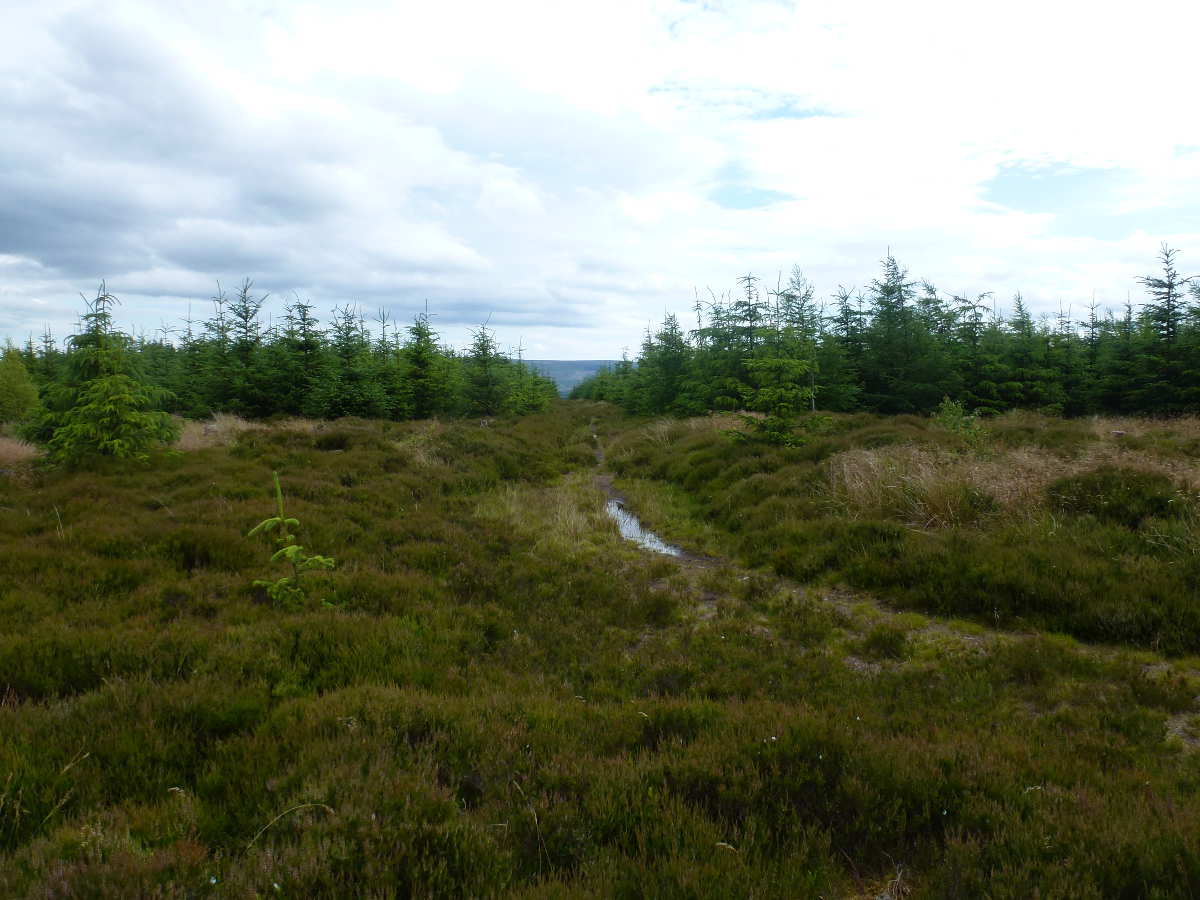 So the views are spoilt but does 14MHz work still? I setup for 14MHz using my simple vertical and 14MHz soundy lively. Better still I got 4G phone coverage so spotting was trivial. It was hard to see the phone as I had to wear my midge net to keep the flies out of my face. However, 14MHz CW worked fine, OE, HA, HB9, SM, CT, 9A being easy QSOs. Better DX was EU2MM and best was KA1R who was 599+60 and gave me 599. Not bad for some damp string and 4 and bit watts

Overall not a bad day. The target summits list gets smaller and smaller.

Sorry I missed you on 60m in the morning Andy. I was otherwise engaged. Ken is a near rf neighbour of mine and just runs 5 Watts. I sure we would have made it.

G0FEX
Hi Andy
Just read your blog, Riccarton Junction I have fond memories of this place it was where I spent my younger years ( my Dad worked on the railway) we then moved to Edinburgh in 1953 .
We used to go back camping to visit our Grandad, who also lived at Riccarton.
Cheers Ken

Thanks for the write up and pics Andy looks great.Must have missed the boat on that pair,probably nodded off in the chair.Good luck.
I will make an effort next time. 73 Don G0RQL.