I have uploaded tracks of last weekend’s activation of Reichenstein, OE/ST-390 to the SOTA Mapping Project. Here I follow-up with some photos.

My son and I ascended “Admonter Reichenstein” via Mödlingerhütte. This mountain lodge can be reached from Highway A9, exit Trieben, and then following a toll road to a parking lot. From there it is about 30 min hike to the lodge. This summit is not to be mixed up with another Reichenstein (aka “Eisenerzer Reichenstein”) about 50 km further east.

This is the view from the plateau where Mödlingerhütte is located. The red line shows the most common route to the summit of Reichenstein, which we followed. 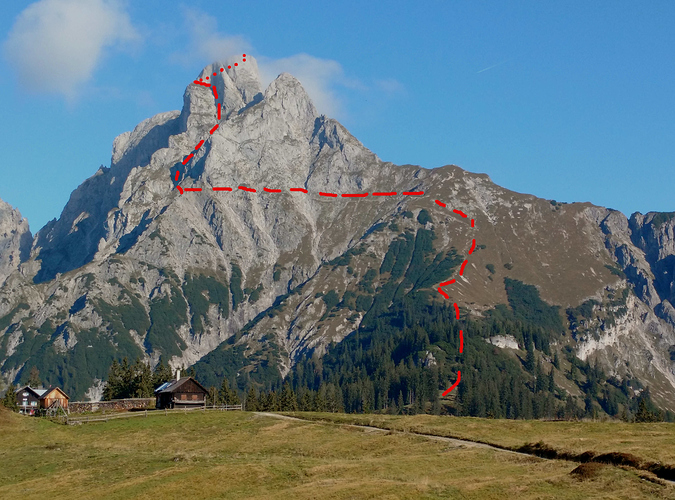 This trail is well marked, but be aware that this not a simple hike. In the upper part it includes several sections of rock climbing. From Mödlingerhütte the trail follows straight North up to about 1900 m asl. Then it follows a traverse where you spend half an hour without any elevation gain. 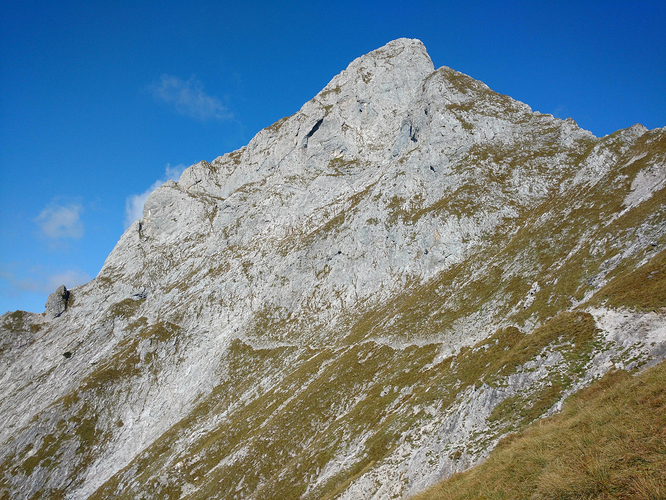 At the end of the traverse follows the most critical section of the trail. You have to climb down for about 20m over solid rock. This section is called the “Herzmann-Kupfer-Platte” (google it!) named after two climbers who lost their lives at this particular location. We used a rope to secure ourselves. There are pre-drilled bolts available. In the picture you see a two-person-party in front of us, also using a rope. 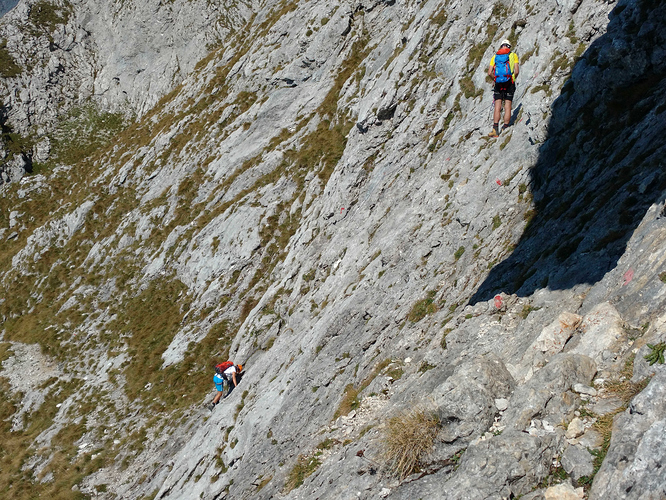 From there on there is no recognizable trail anymore. The tour is marked with red dots and follows straight up a ravine. There is no chance to get lost here. You have to gain about 200 m in elevation by climbing. 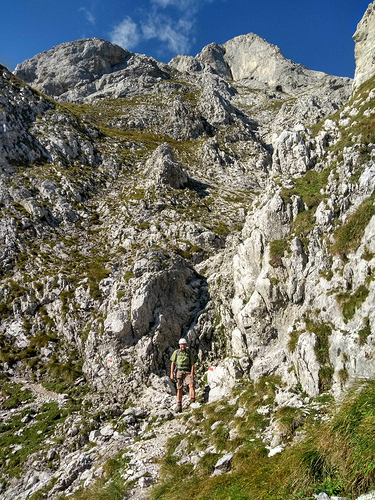 Just before you reach the summit a vertical cliff blocks the way and you have to turn left below it. On the west side there is a trail over rock, loose gravel and grass. 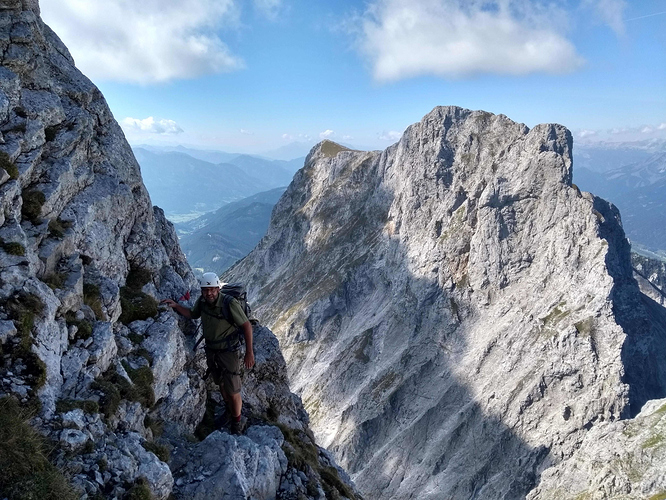 From here you have a good view to the neighboring summit Sparafeld, OE/ST-047 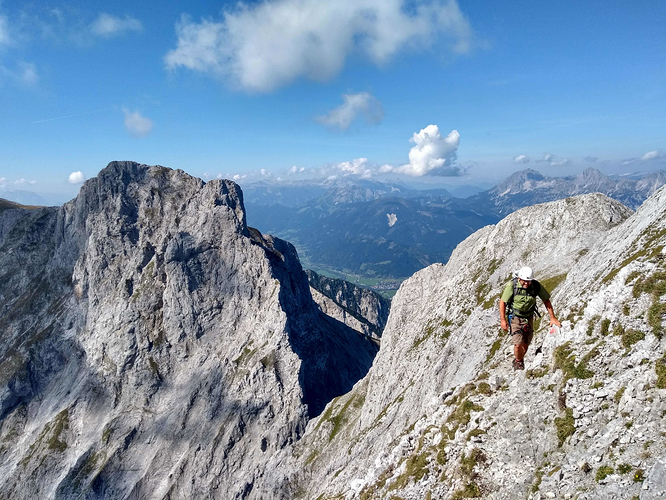 At the summit!
We met just two other hikers during the hour we spent at the summit. 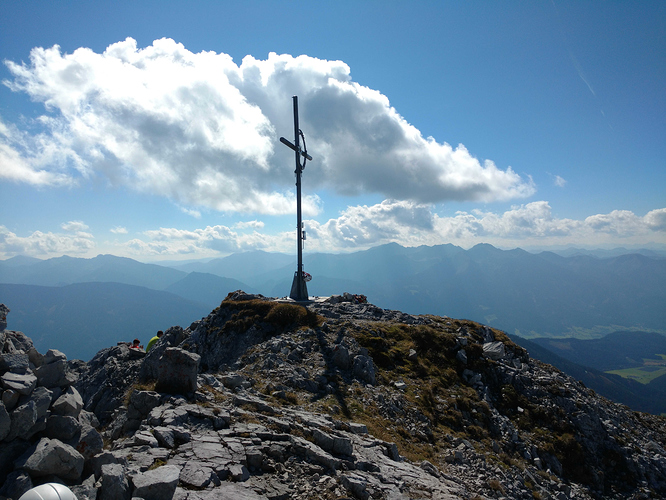 And finally time for SOTA! 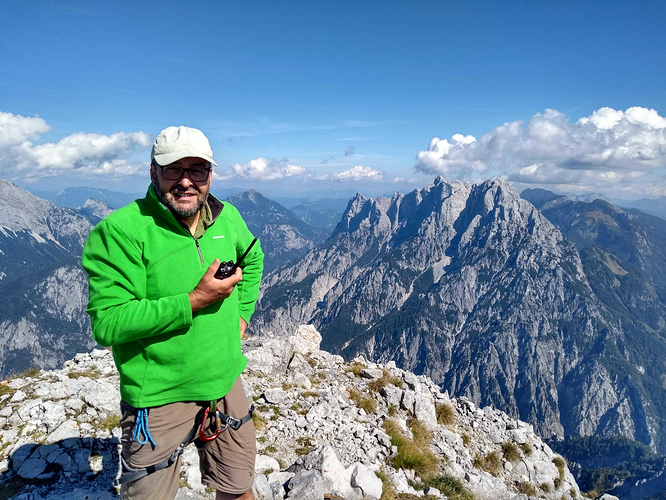 Route down is the same as up.

Congrat to this first activation to you and your son. The panoramas in the Gesäuse area are always great.
Very good climb and a good plan to bring a rope with you. Better safe than sorry.

Thanks for our QSO. This summit was and is still on my todo list and now it’s gonna be a SOTA complete

That’s a great climb! Congratulations!
Thanks for the QSO!