Motivation
In the last days we had seen an improvement of the propagation between Europe and North America, being able to chase from home a good number of activators in USA and Canada.

Jorge, EA2LU, and I decided to do an afternoon activation, thus maximizing the chances of contacts with NA, going to a new mountain for us that was activated only once in 2015.

Driving directions
• Exit Pamplona towards France (road N-121-A)
• Close to the village of Ostiz take the exit towards Ultzama (road NA-411)
• After Latasa, take deviation right towards Galain (road NA-4242)
• When reaching Urrizola-Galain, park and follow a concrete route heading north towards the highest part of the village.

The climb is easy. You walk first on a steep concrete path and later you exit the path crossing a nice beech forest. 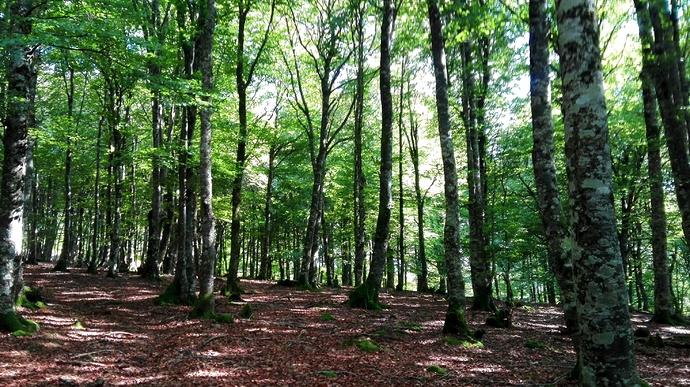 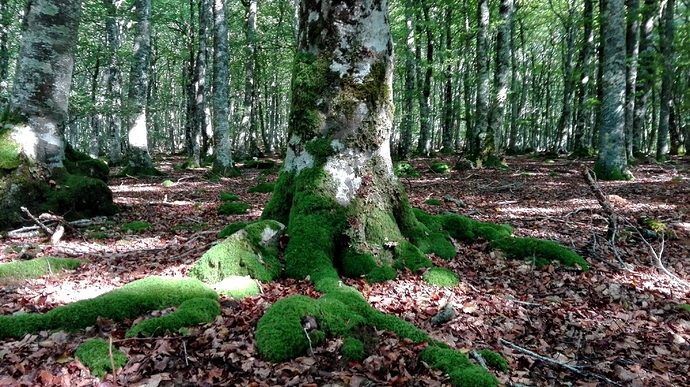 Summit is surrounded by trees but there are enough open areas to install the antennas without problems. There is no trig point but just some stones piled in the higher point. 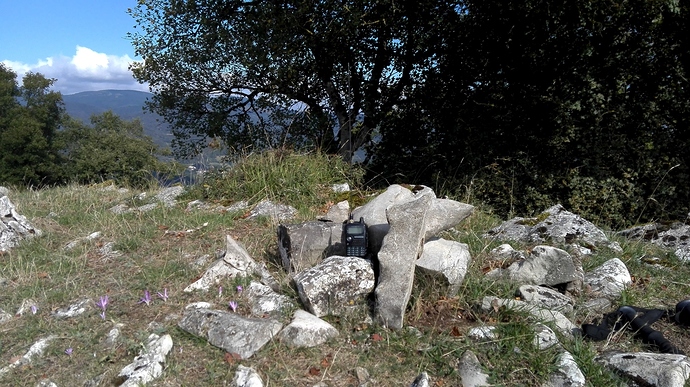 Weather was fine enough with little wind so that we could fully deply the mast and hang the wire from it. The last sections are thiner and the mast bent a lot but we could strecht out the wire as a sloper, heading north-east. We used some guyin line to hold the tall pole secured. 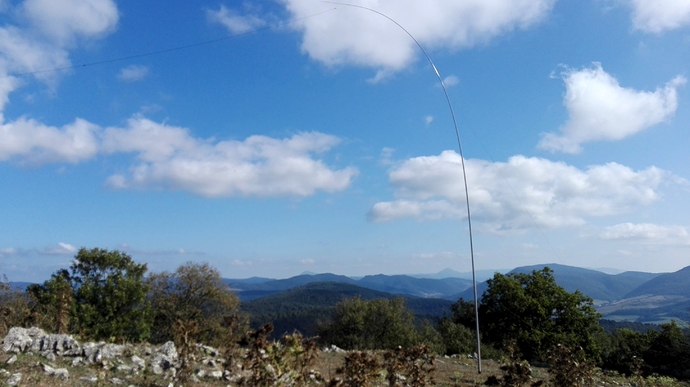 I moved further appart and installed my aerial on my 6 m fish pole inverted vee. 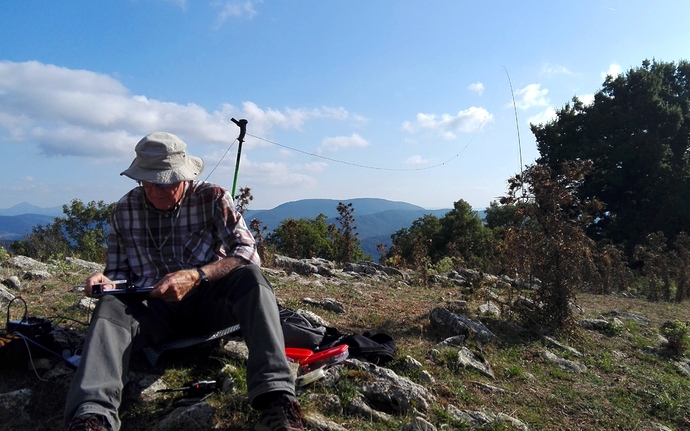 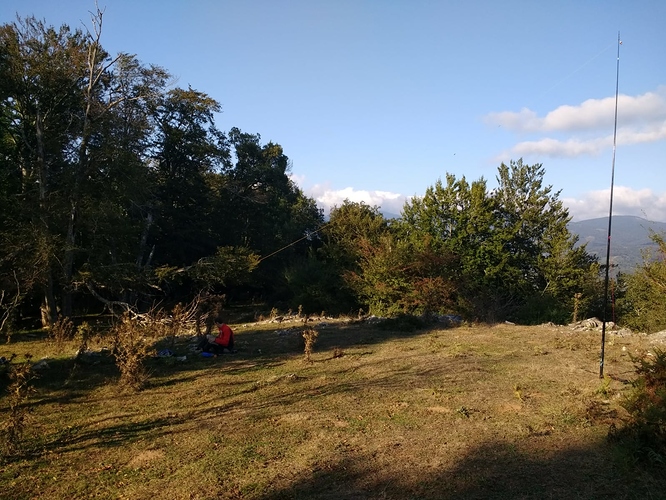 I started first on VHF and logged EA2BSB, Santi, in fact the ham that had activated this very summit once back in 2015, being happy to complete with us.

Jorge started on HF, working CW and I did HF SSB on 20m. Jorge had success to work a number of stations while I just reached my nr. 4 in my log and then nobody else answered my calls for minutes.

Jorge warned me after he worked S2S to a UT5 activator. He was loud on 40m but I couldn’t make it through.

I decided to get back to 20m this time on CW, and heard a loud signal on 14062 calling CQ. I jumped when I noticed he was N9XG activating on W1/DI-003. Wow, incredible good 559 in my radio!
I called him afew times and logged S2S receiving 439. Thanks Ian for the DX of the day. Jorge worked him receiving 549. I recorded a video of his qso: it’s nice to watch these videos when back at home and enjoy such a qso.
I kept listenig N9XG for some minutes. He was strong and stable, and sometimes I couldn’t even hear some of his chasers from USA.

We were glad we could work that NA sota as we were willing but I’m afraid we didn’t get any other call from the States. I ended my activation on 40m SSB where I had a few callers there.
When back at home I checked on RBN to verify what stations had automatically put spots for EA2LU’s cq calls; to my surprise there were only EU stations: 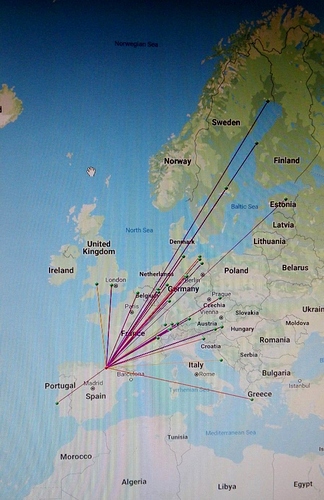 REMARK on this summit for the Database:

Mt. Epaitzburu is identified in the SOTA summit catalog as the highest mountain in his range, but when I was preparing the climb, I checked on topographic maps and found there is a mountain further north-west which seems to be a little higher.

Mt. Epaitzburu (green arrow) is 837 meters while the near Mt. Arañotz (red arrow) is 840 meters… The col in just 754 meters, therefore not enough prominence to consider Arañotz as a separate SOTA summit. 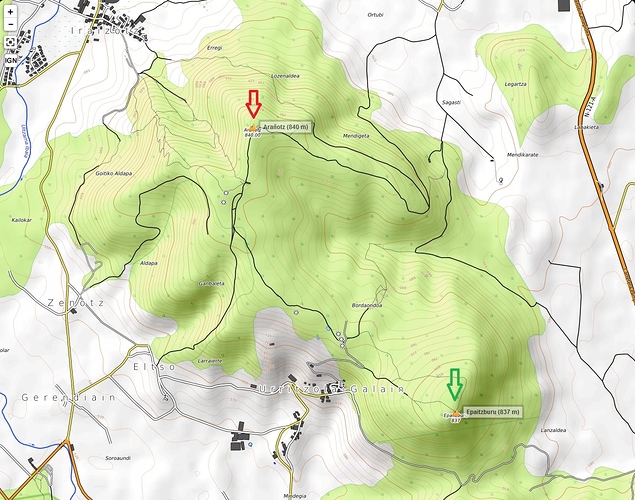 Perhaps the database should be updated in the future to have Mt. Arañotz as the top SOTA summit instead of Mt. Epaitzburu?
Leave the question open for the MT.

Thanks dear chasers and see you soon, 73 de Ignacio

Leave the question open for the MT.

Hi Ignacio,
Thanks for the report and SOTA QSO from that summit.
Perhaps your open question for the MT will not be detected by the right member, so I’m going to do this in order to drag @G4TJC Simon’s attention.
73,

I always enjoy looking at Spanish summits, not least because of the great resources we have from Instituto Geográfico Nacional.

So, we can use the official topo map instead of OSM, which is much more reliable for elevations. We can even reproduce it here. 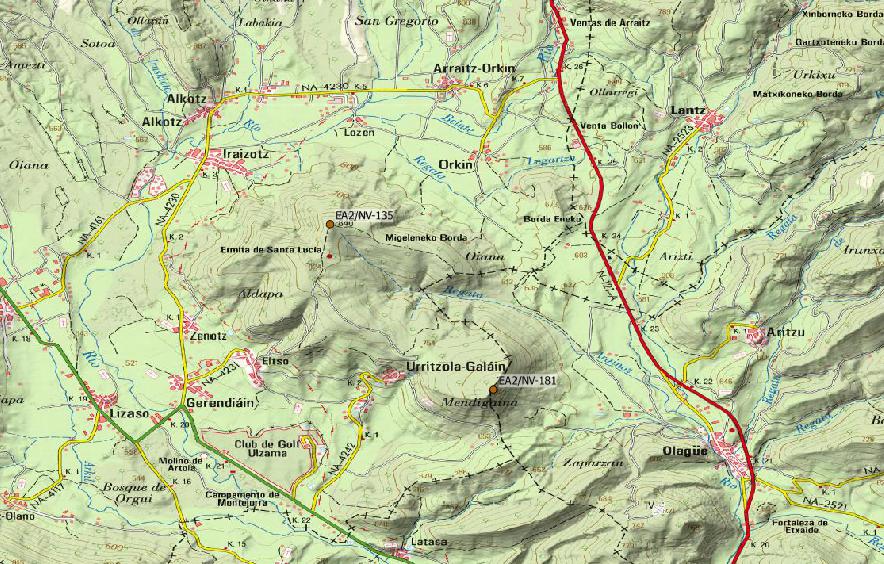 Here we have the SOTA summits superimposed. Yes, you may notice EA2/NV-135, which is the retired summit at this position. If you zoom in (try the IGN viewer for a proper look) you can find IGN’s summit spot heights:

Also we can download the LIDAR-derived (and therefore very accurate) elevation model. This confirms the map spot heights (or one might suspect vice versa).

There is also a spot height at the col, of 754 m, and as Ignacio notes, this is not enough of a drop for the lower summit to be valid. As the data indicated EA2/NV-135 was the lower summit, this is the one which was retired. Of course you may still choose to activate it for your vertice award.

On the topic of IGN mapping I notice from their front page that they have a new version of an Android app, based on Orux. EA activators may want ot check that out:

thanks a lot for your clarification and further details.

With such data, the only pending thing to clear the point for the future is to update the Sota Summits list that created my confusion. When I see the information for EA2/NV-181 I see this data:

The header should be updated to show 841m.
It is curious that In some other mountain catalogs I find also marked as 837m, but anyway, I assume the right one is 841 m finally.

Again, thanks for your hard work to keep the summits updated globally, quite a tough task!

The header should be updated to show 841m.

Yes, good point. We should change this.

Really we need the EA2 AM post to be filled to watch out for things like this.