Located in the most western part of Navarre area (EA2/NV), this 1118 m a.s.l. peak is a remote summit I had never visited before. It is located 60 Km west of Pamplona, the capital city of Navarre region. 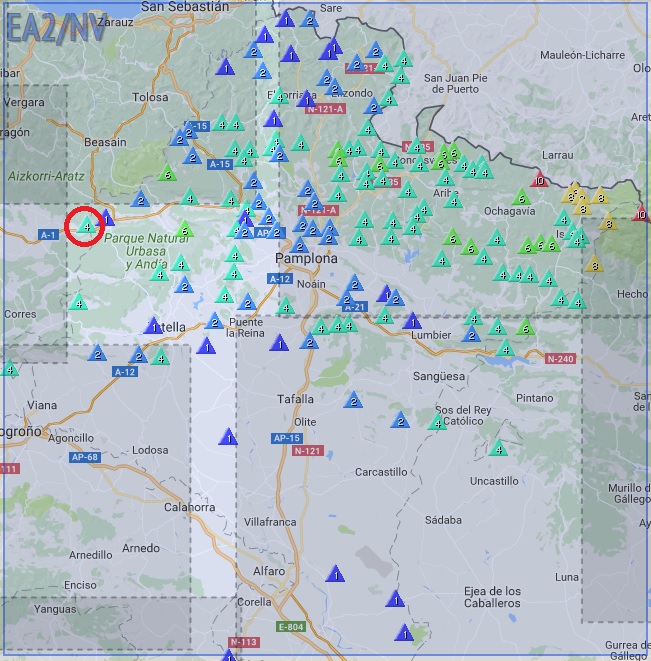 I drove direction to Vitoria and left the road towards Ilarduia. Just next to this village there is a famous cave called la Leze, where I left the car on the parking area. 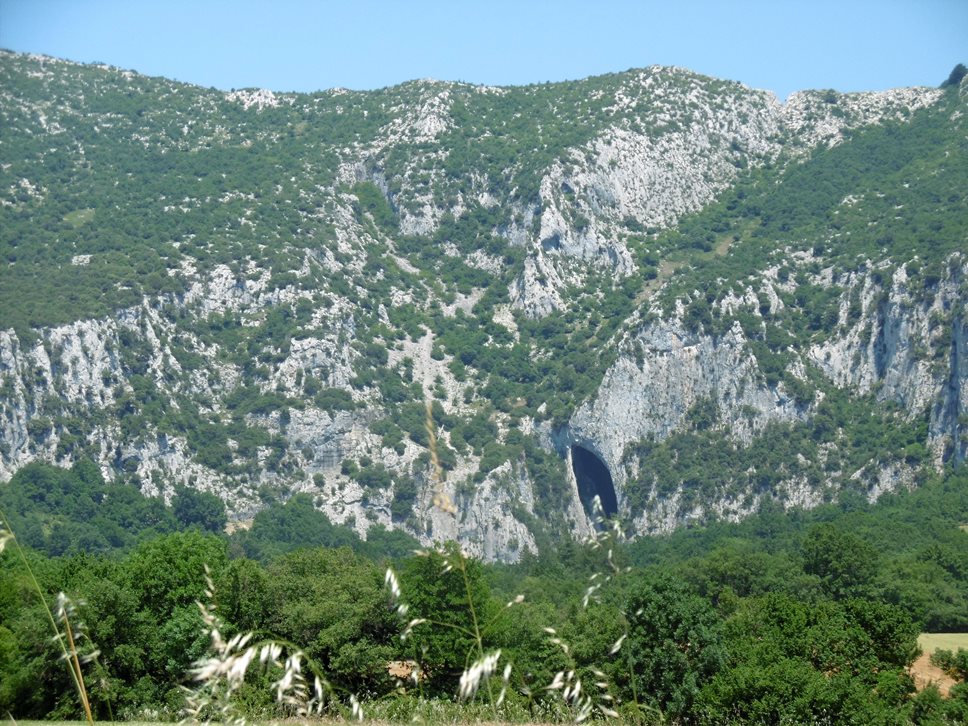 A couple of funny donkeys came to greet me, and probably in search for some food… 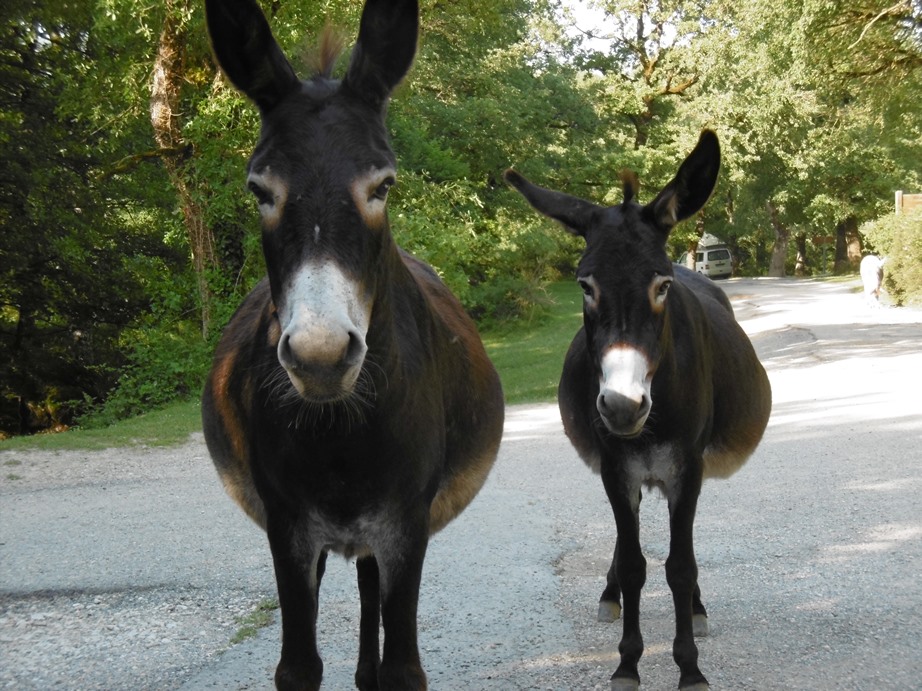 I started the hike and I soon found a long chain that helps a lot to gain height in this steep start of the mountain. Very frequently you find a white and yellow flag painted that indicates the route along the track. 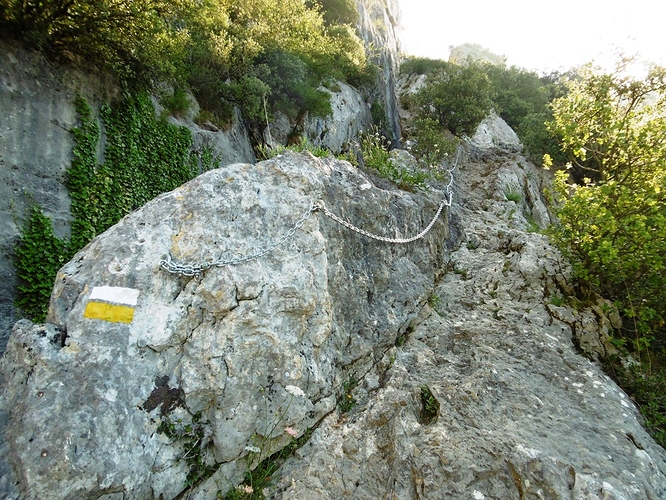 After a bit more than one hour I reached one summit that is not the destiny, but an intermediate summit in the way to Arbarain. This is called Olano (Aitzandia in vasque). The mountain mailbox is well decorated with a binocular. In the end you can see the beauty of another Sota summit: Aratz EA2/VI-003 which is 1446 meters high. 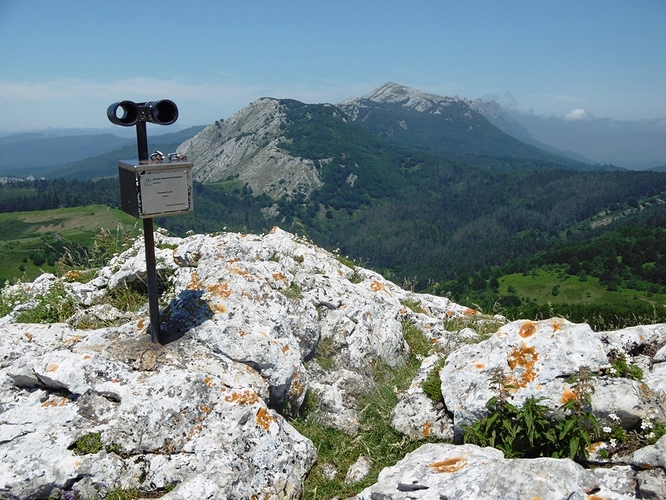 I kept on walking and a bit further on I passed a nice grassy area where some horses were looking carefully after their baby horses. Look at this nice foal I encountered quietly in front of me! 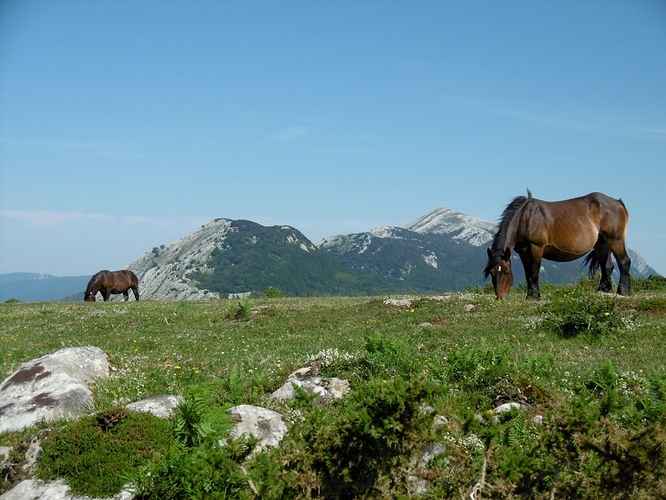 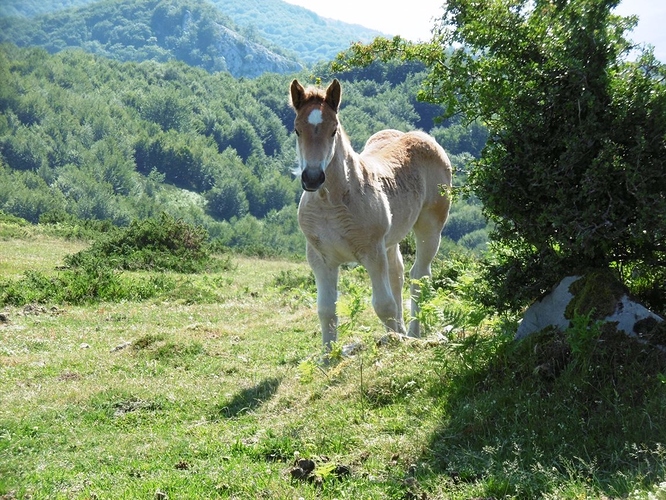 The day was bright and I kept walking. I reached the summit 1h 45’ after the start of the hike, a bit exhausted. The track was about 4 km long and 520m elevation gain.
The summit is nicely marked with a trig point, a curious mailbox and another structure. I used the trig to hold my fishpole. 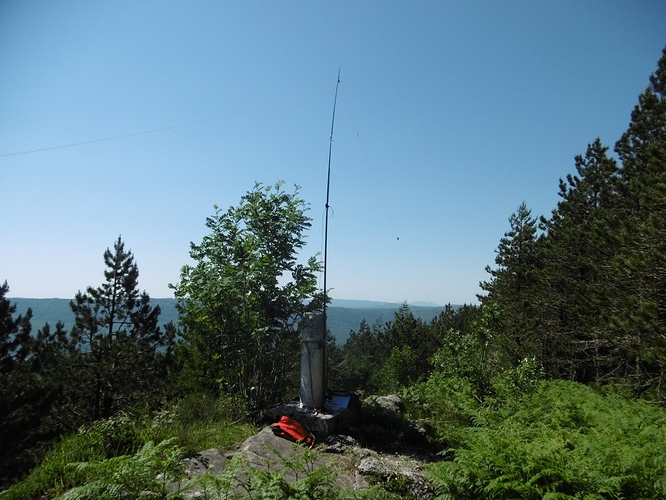 The mailbox is the sculpture of a big yellow flower. The surprise is that when you open this flower there is a little pelota court inside. Such courts are frequent in many villages in the vasque country, where players fight using these walls to bounce a hard ball they throw with naked hands… 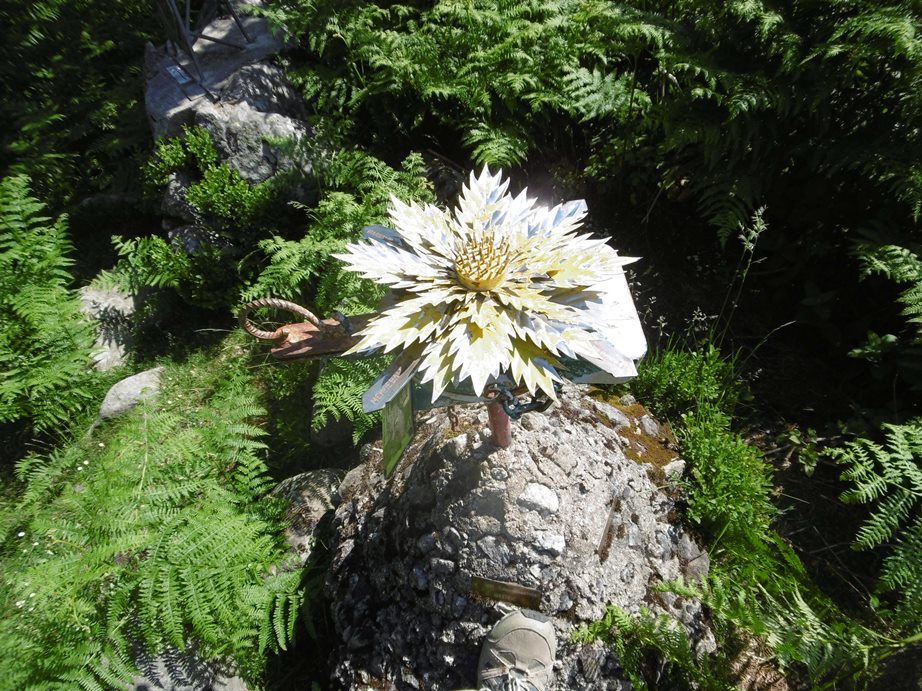 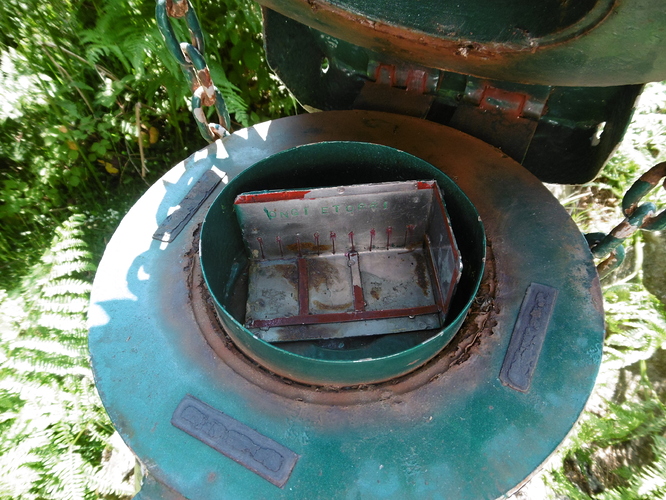 The other sculpture is also curious. This mountain is located in the very border of three regions: Navarra, Gipuzkoa and Alava. For this reason the sculpure shows a 3-sided mark with the three shields of those regions:

I started the activation running on VHF FM. I soon grabbed 4 qso and after some unresponded calls I moved to HF. I started cqing on 30m CW but it was dead. I called for about 15 minutes with no replies at all. I checked the antenna and scanned the band: nothing, it all was so silent in my MTR-3B that I felt something was wrong! 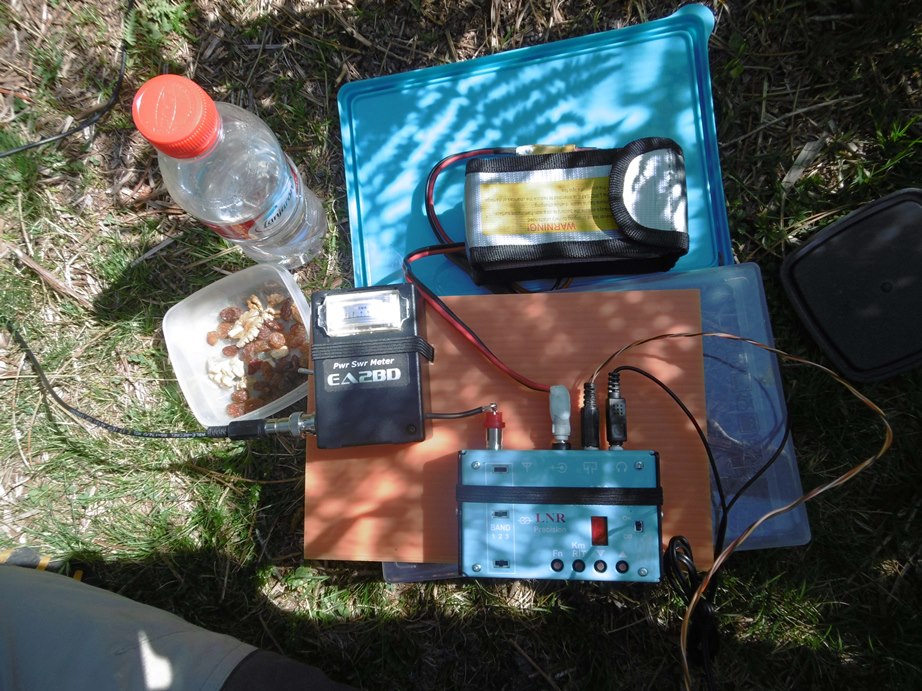 Then I moved to 20m CW and I could get some chasers in my log. Seems propagation was poor on 30m, although I experienced deep QSB on most chasers in 20m.
In total I got 21 chasers on HF. I started dismantlling HF and got 2 more calls on VHF. It was hot and I was running off water…

Natural tip of the day. La Leze
On my way down I approached the entrance of the cave, La Leze, were a big source of fresh water comes out of the mountain. This is the river “Artzanegui”. This river eroded the mountain for centuries and now it passes from north to south through inside and can be explored doing speleology.
It was great that I could wash my sweaty hands and face there! 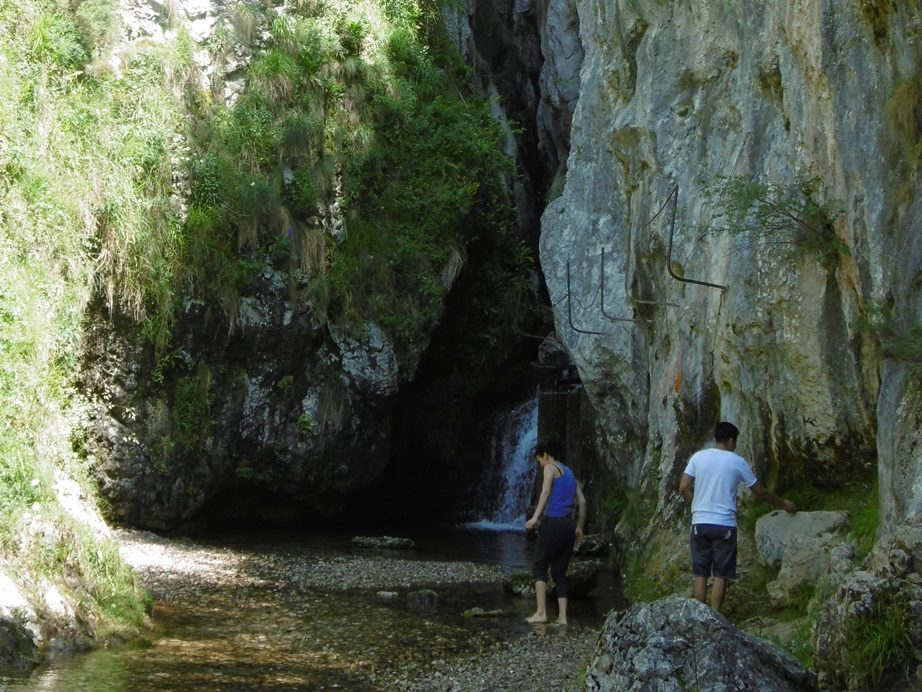 The tall and vertical entrance of the cave is 80 meters high: 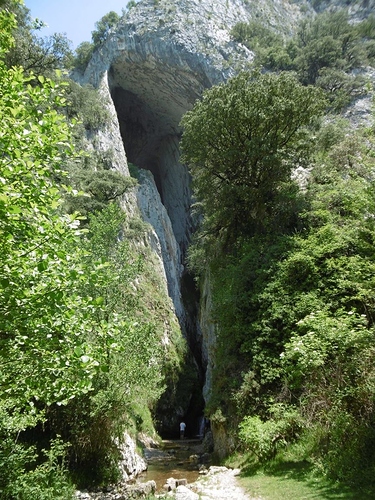 With a feel of satisfaction I drove back. A nice walk this morning!
Thanks all chasers and see you soon, VY 73 de Ignacio.