As SOTA Activators we operate radio from the summit of Marilyns, hills with 500ft precedence. In the UK, more popular, is the sport of Munro bagging. A Munro is a mountain in Scotland with a height of over 3,000 feet (914 m).

Munros are named after Sir Hugh Munro (1856–1919), who produced the first list of such hills, known as Munro’s Tables, in 1891. Since then the list has been the subject of subsequent revision. In the 2012 revision, published by the Scottish Mountaineering Club, 282 Munros and 227 subsidiary tops are listed. Almost all Munros are also Marilyns.

“Munro bagging” is the activity of climbing all the listed Munros. They present challenging conditions to walkers, particularly in winter. As of 2017, more than 6,000 people had reported completing all of them.
On Saturday 31st March, “Munro Baggers” Colin (G0WAD) and Paul with 14 companions ascended Ben Wyvis (1046m) GM/NS-005, their final Munro. We had boots on the ground at 0800 local and set off in light snowfall. We fixed crampons at the 600m level and with the visibility deteriorating, reached the shoulder of An Cabar at about 10:15. Whiteout conditions prevailed all the way to the summit trig point (the top of which was level with the snow field). 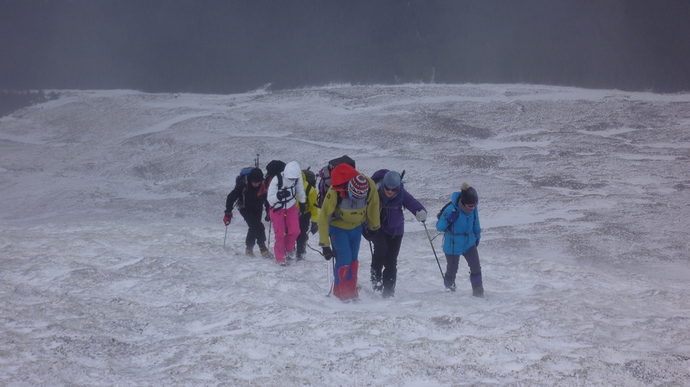 The advanced party ascending to An Cabar 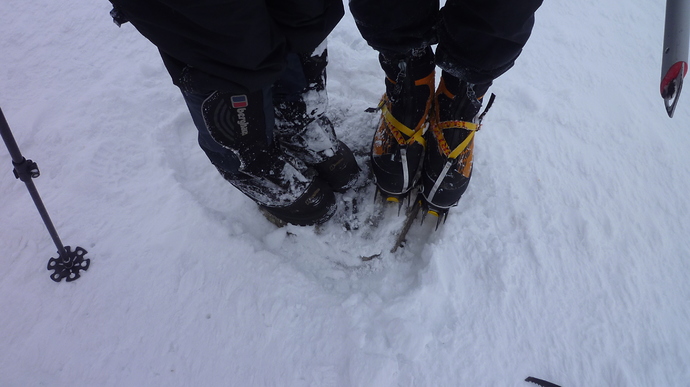 The top of the trig point

Owing to time constraints on the summit, I had decided to activate Ben Wyvis using 30Watts of 2m fm to a rucksack-mounted end fed aerial. In preparation I contacted members of the Inverness & DARS to enlist their support. This proved to be a good plan and I worked MM0DHY/M, GM7PKT/P (S2S with GM/SI-155 on the isle of Skye), GM0SFQ, 2M0JAT, GM4JAE, GM0UDL and GM7LSI. A successful SOTA Activation. 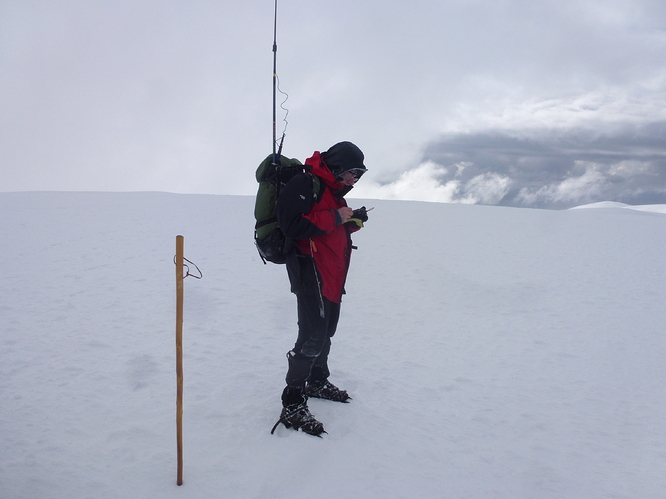 In a biting NE wind we took photographs, made congratulatory hand shakes and sipped Champagne or Whisky. Right on cue the visibility improved and we were rewarded with clear views enabling the party to proceed more easily back to the summit of An Cabar and the decent to the car park. I remained on the summit while Colin descended to the col, enabling me to work GM0WAD/P whilst he was outside the activation zone. 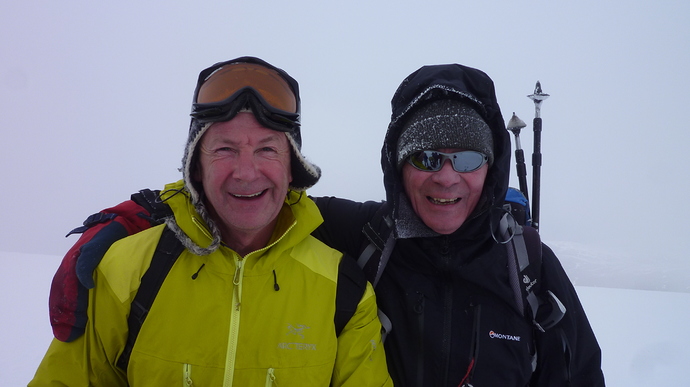 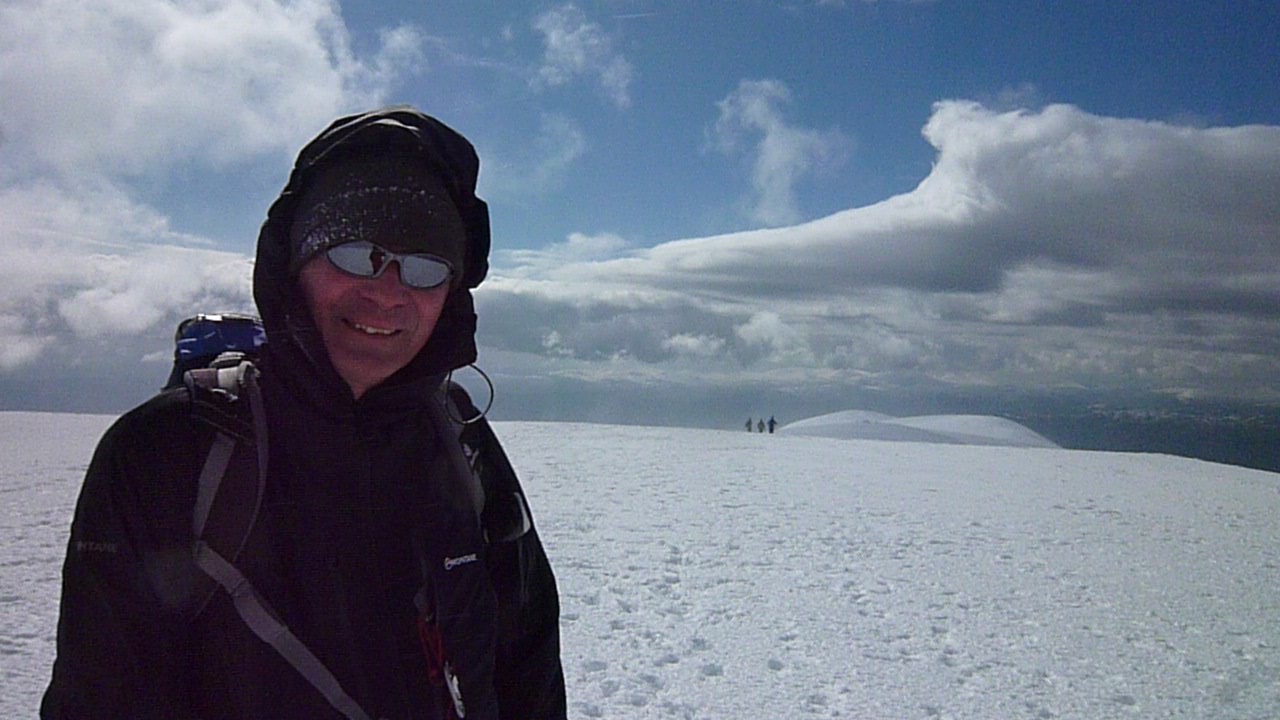 Colin about to leave the activation zone.

This was the largest hill party that I have been with since my school days in the English Lake District! A great day’s walking, 16 set off, 16 returned, no one lost, nothing broken. 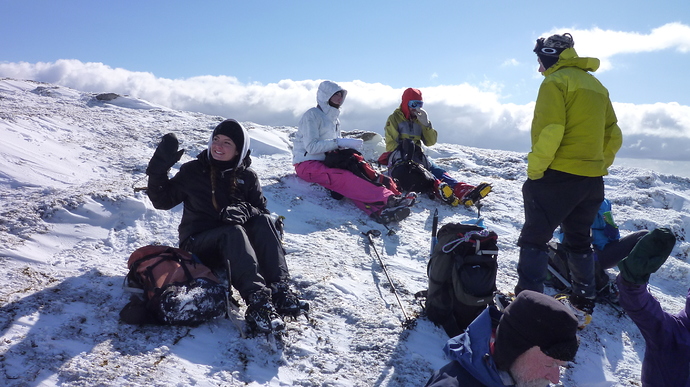 Two days before we travelled North I had a flash of inspiration. 16 people on the top of a mountain to celebrate the completion of 282 Munros by two people, one of whom was licensed and had supported me on many SOTA activations. This met the criteria for a “Special Event” so I applied to Ofcom for a Notice of Variation (NOV) with the Special Event call GB0MUN, to be used exclusively on the summit. Apologies if I confused people with this unannounced call sign. Thanks to all of the stations worked and Inverness & DARS, without whose support it may not have been a successful SOTA Activation.

Great report David, sorry I missed you guys on the radio. Ben Wyvis is very much LOS for me, see it from the house here in Inverness. Glad yous had a successful day on the hill.
Adrian
MM0TAI

Thank you for the report and pics. Congrats to Colin and Paul and to you and the rest of the party who made it a memorable occasion.

the summit trig point (the top of which was level with the snow field).

and congrats for the Munros too

Many thanks for the excellent report and well done to all in the group. When I saw the first photo I envisaged a tale of difficulty and hardship, but the last photo shows that you were blessed with sunshine and a decent day.

Many thanks for the excellent report and well done to all in the group. When I saw the first photo I envisaged a tale of difficulty and hardship, but the last photo shows that you were blessed with sunshine and a decent day.

The dividing line between success and disaster can be very narrow in these conditions.

Well done on the activation and to all who participated.
73,
Rod