Hoping to get up to Mount Washington in New Hampshire tomorrow for an activation. Expecting primary activity to be HF (20 and 40 meters SSB and CW), but since it is also the ARRL September VHF event (starts 1800 UTC Sat), I might drag along some 6 meter gear to see if I can pick up some QSO’s on the VHF bands. I’d love to work some S2S on 6 meters if anybody else is planning to operate the band. 50.135 SSB and 50.095 CW as a starting point, but may go up or down depending on how crowded it is. Cell phone service is an unknown quantity at the summit, so may or may not be able to self-spot. Hoping to be on by 1600 UTC if we can get out the door on time!

You might try FM simplex on 146.520
Many of us here in the North Country can reach Mt Washington.

Have a good activation.
73 George N1GB

Well that was a hoot! For once, we actually arrived on schedule and got gear set up at the appointed hour. Sadly, I couldn’t self spot.

Weather was grand for the drive up the mountain, with a few wisps of driving through the clouds on a rather narrow and spooky road sans guardrails (see this YouTube to get an idea of the road in question - We took it quite a bit slower!

https://youtu.be/4BZh-7hkNe4?t=267 ) Quite a few people at the parking lot and wandering around, but not too crowded.

Set up with the 31 foot Jackite pole for HF vertical with elevated radials, a 28 foot Jackite pole with my “new” 6 meter Hentenna, and even pulled out my 2 meter handheld measuring tape Yagi to see if I could reach George, N1GB or anybody else on simplex.

No luck on 2 meters at all.

6 meters was pretty good, but had fewer people on than I had hoped. It was right before the big ARRL contest, so my assumption was that there would be tweaking and tuning and general 6 meter activity prior to the contest. And yes, there were a few. Signal reports were good, so it may have just been conditions. The antenna, being new, was suspect until then. It seemed a good day and place to try it out.

20 meters was on-again-off-again. Had some bursts of activity, got driven off a couple of frequencies, switched from SSB to CW and back a few times trying to stay ahead of the contests and QRM. Lots of fun.

Three S2S for the day, so a bonus there too.

As we were set up about 20 feet from the Appalachian Trail, we had a lot of hikers coming by and asking what we were up to. Many assumed we were doing some weather related work or maybe shooting a documentary or something. (Note to self - CW impresses the crowd a lot more than SSB.) Took the time to answer questions and put a friendly face on the hobby and got some wonderful support and encouragement. Only one DX (France). Even so, the inevitable question of “How far have you managed to talk?” was met with astonishment when I whipped that answer out.

Sadly, the weather turned, as it often does on Mt Washington (hey, they have a building that is chained down because of high winds up there) and the fog rolled in and it started to rain. XYL was looking chilled and soggy, and the drive back down was looming, so we decamped at about 1820UTC. This meant I really didn’t get to take advantage of the 6 meter contest. Oh well! Visibility was about 15 feet (5 meters) as we headed down. Oddly, not being able to see the sheer drop to the side of the road made it less stressful. Perhaps Douglas Adams, of Hitchhikers Guide to the Galaxy fame, had a good idea with his Fear-Sensing-Glasses that turned opaque so you couldn’t see what was scaring you!

Anyway, it was good day out, if a bit shorter than anticipated. This will be a regular summit every year, for sure. Great location. Thanks to all who chased me. 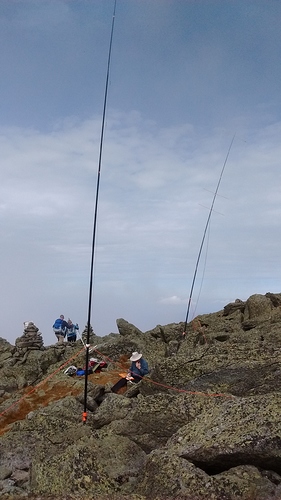 Hello Bruce, i saw your alert and was hoping to grab you ! I was within reach on 2 meters on VE2/QC-005 but … unfortunately.