My attempt at a 2m FM only activation wasn’t successful on Druimarbin, as it is called on the OS map, GM/WS-339 but I had 2 good QSOs with GM4NFI and GM7PKT/P both are Fort William based but the latter was out on foot in the area. I also heard briefly from GM0HBK on the Isle of Skye but couldn’t raise him again.

I don’t think there is line of sight from this summit to Inverness where it might be expected more operators could be found. In the photo below there is a mast on the right. Left of this is a dip in the horizon and this is the Great Glen which leads to Inverness. There is even a glimpse of the bottom end of Loch Lochy but this summit is just a little too far south east for a view directly up the Great Glen which is what you would need. I think you could get this from GM/WS-311 on the opposite shore of Loch Linnhe which has only been activated twice but is awkward to reach from Fort William if your time is limited as mine was. 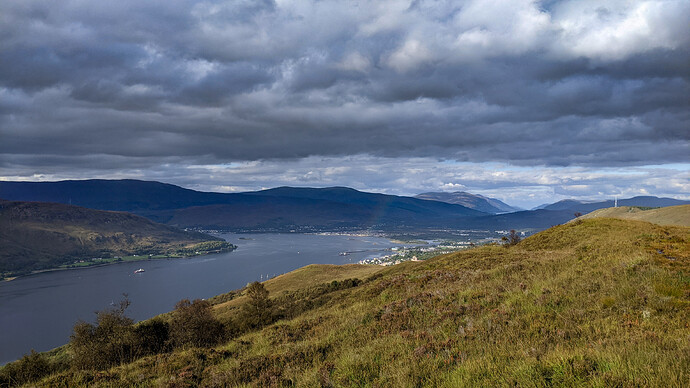 So I switched to HF after putting up the Tri-bander. I wasn’t hugely confident as there are now no sun spots visible but the 40m band was very hectic and I struggled to find a slot for an SSB call, having to QSY three times. But two more UK call signs, 2E0FEH and M0BKV went in the log to be followed by Manuel EA2DT who must have been struggling to hear me as my report from him was a 41! I had heard him call earlier after my first spot but we managed it when I finally found somewhere reasonably quiet.

I tried calling on 20m SSB but without any response. Switching to 20m CW found EA2LU but no one else apart from a brief glimpse of what I think was an IK callsign. Looking afterwards on the RBN map my 20m CW call had been heard reasonably strongly on the eastern seaboard of Canada and the US and also in southern and eastern Europe but absolutely nothing to the north.

I think, given time and patience you could activate this summit with 2m FM if you chose a weekend and were prepared to hunt around with a beam antenna. 2m SSB would also be an option but the summit is surrounded by higher peaks so it will always be a struggle.

Here are a few photos of this micro-expedition. My brother came along and took some photos of me which I’ve included for completeness. They are holiday snaps really - but I am on holiday so what can you expect?

Me and Charlie close to the summit. 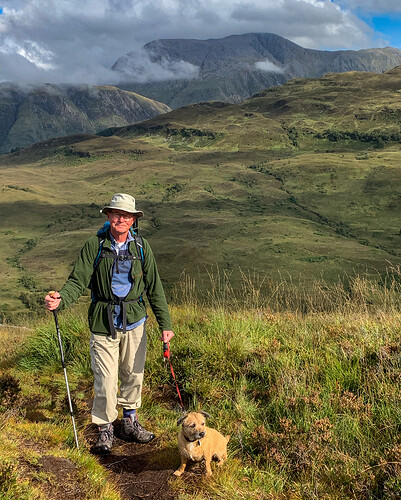 Putting up the Tri-bander, Ben Nevis in the background. Weather conditions were excellent, no wind and it was reasonably warm at about 15C. 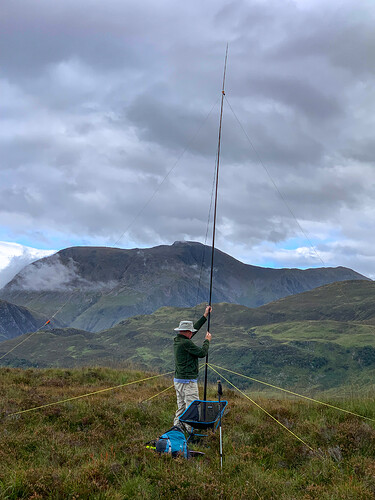 Looking south west down Loch Linnhe. The Isle of Mull should in theory be visible on the horizon but it was more or less hidden behind showers. The figure is my brother. 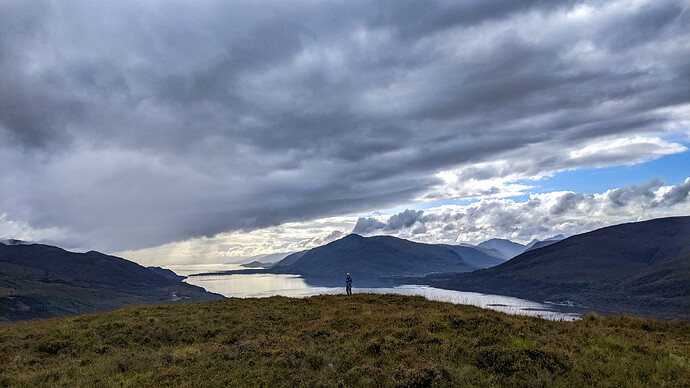 This is me committing CW crimes. I left CW to the end but I probably should have started with it when my brain was fresher and fingers warmer. 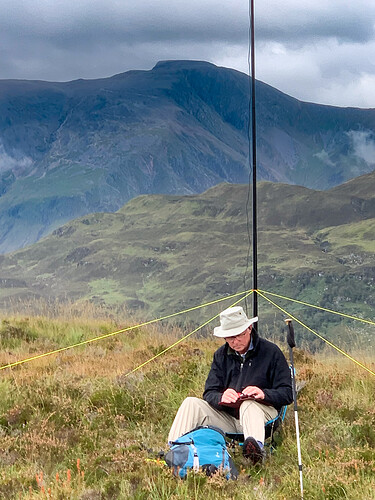 But it was a pleasant afternoon and my first GM activation. More could have been done but a great nephew and a great niece who I had never met were coming for supper and they had to eat early - so the activation was cut short.

I hope to try another GM summit or two this coming week but the weather forecast is not looking promising. Fingers crossed.

Thanks John, great report of your activation

Hi John
Thanks for our short 2M QSO today -
As WS-339 is just below my QTH I go up there fairly regularly.
Sorry i missed you on HF but by the time I saw your 20M spot you had gone QRT.
I have had a fair bit of success from WS 339 on 40M CW
Another easy access SOTA to consider is WS-344 about 3 miles north of Fort William just off the main A82.
There is a gated land rover type track up.
WS 293 just across from where you were is not an easy SOTA as there is no path up and you have to go through bracken and cross a bog before you start the climb.