The West Lion and it’s twin to the East are iconic features on Vancouver’s North Shore and has inspired names for a bridge, a small township, and the local CFL football team. They provide a powerful draw for many day hikers, though the exposed and technical nature of the final ascent has landed more than a few would-be mountaineers in trouble. Fatalities are not unknown and North Shore SAR teams have come to know the area well. 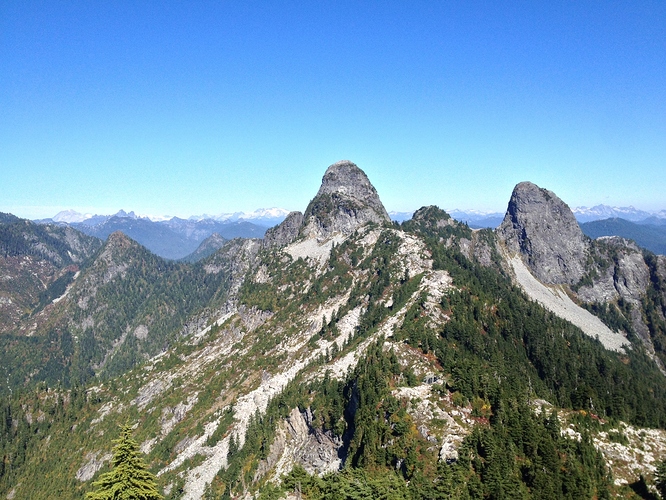 The Lions from Unnecessary Mountain

Getting to the summit can also be an adventure and a workout. There are three routes: two from Lions bay on the Sea-to-Sky highway, and one from the Cypress Bowl ski area. Approaching from Lions Bay involves gaining 1600m over 7.5km with an average grade of 23%. This is characteristic of most ascents in the area, including Mt. Brunswick and Mt. Harvey. The route from Cypress Bowl is equally grueling, however it follows the Howe Sound Crest Trail which runs along the ridge of a series of summits before reaching the Lions. The overall ascent/descent figures for a one way trip are 1400m up and 650m down, though it is less sustained than the route from Lions Bay. This route is also slightly longer at ~10km one way. I had hiked Mt. Brunswick a few days before, so I decided to shake things up and approach from Cypress Bowl.

The Lions (left side) and Howe Sound from Mt. Brunswick

Being a Saturday I had slept in a bit and arrived at the trailhead around 11:00am to find the usual weekend throngs. There are 2 million people in Greater Vancouver, and many of them flock to the mountains on the North Shore in good weather, and poor. Four regionally listed summits are accessible from Cypress Bowl (Black, Strachan, Hollyburn, and St. Mark’s mountains) so it’s also a hotbed of SOTA activity.

The ‘fun’ part of the approach from Cypress Bowl

The first third of the hike is quite pleasant and well traveled, especially on a sunny weekend. St. Mark’s is the first summit reached and also where most people stop for lunch. Activating from this location is also lovely, with great views of Bowen Island and Gibsons Landing and enough trees to hang dipoles. I reached it at 12:30 and opted for a light snack and some water before pressing onward. The descent towards the next summit on the range, Unnecessary Mountain (aptly named) is also well maintained and ends in a forested saddle. This is where the trail turns toward the rugged. Steep roots and slabby rock define the ascent to the first of three bumps leading to the Unnecessary summit. 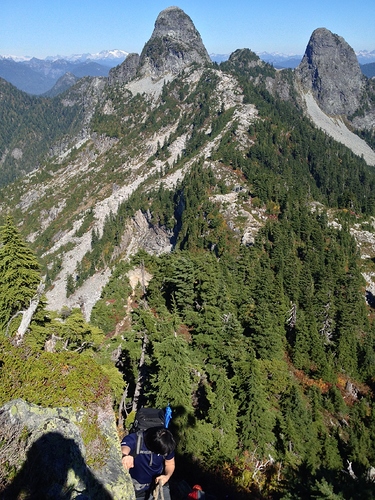 Before reaching the 4th class cruxes to reach the summit proper, there is a final sub-summit that adds another 150m descent/ascent to an already long day and ends in a notch where the interesting part begins. I took a short break here to rest my legs, then pressed on. 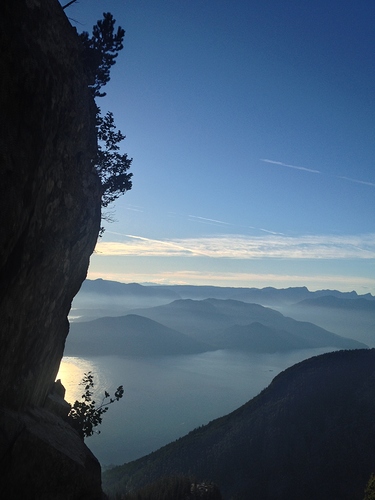 The view from the notch 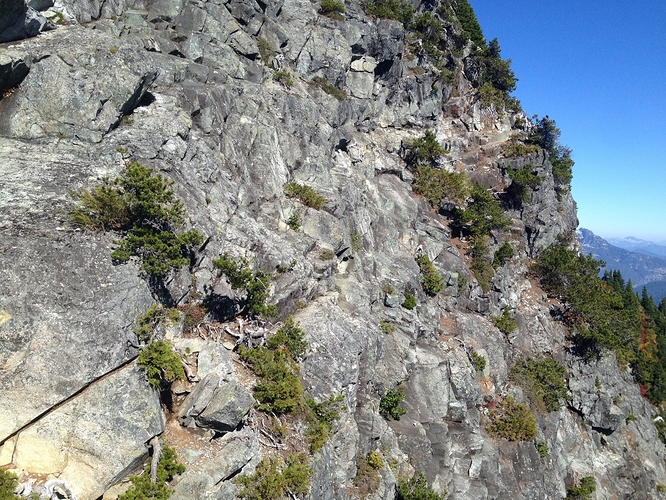 The first crux from the base of the final ascent of the West Lion, the route is along the ledges in the middle of the picture

For experienced mountaineers and people accustomed to climbing outdoors the cruxes are not particularly challenging, but the exposure remains the same. There are two pieces of fixed protection for those who drag up a rope, though most people opt to climb without protection. 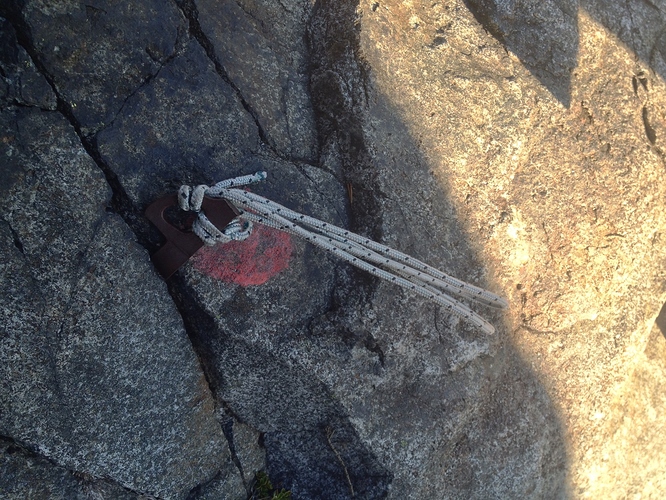 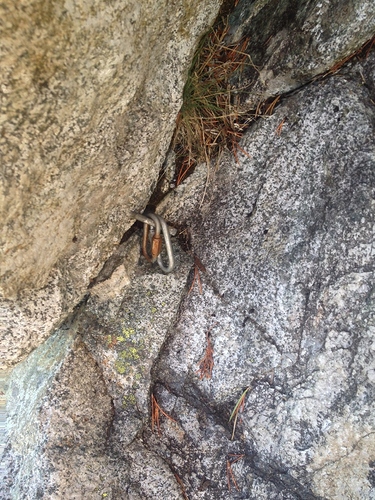 Fixed Protection on the first crux

Once on the summit the views of Howe Sound, Brittania Range, and the rest of the sub-2000m peaks in the area are incredible. The East Lion beckons, but due to crumbly rock and local protected watershed restrictions it is rarely climbed. I arrived at about 3:30pm to find a few representatives from the UBC Varsity Outdoor Club sunning themselves before carrying on to camp at Magnesia Meadows a few kilometers long the Howe Sound Crest Trail. The VOC was founded more than 50 years ago and every year recruits a number of new university students keen to explore the mountains of southwest BC. They have a reputation for two things: hiking fast and hard, and full frontal nudity. While they exhibited the former after our chat I was spared from latter.

The view from the summit, including Brunswick, Harvey, Hanover, East Lion, Colliseum, and Crown Mountains 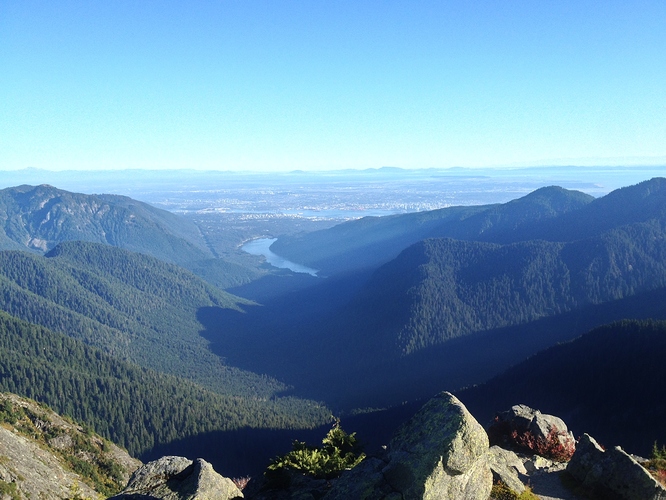 Vancouver, to the South

Having brought only my 2m/70cm portable with me my band options were limited, but thanks to the ARRL VHF contest that same weekend I was able to rack up a decent amount of contacts. I was able to reach people on Saltspring Island, Vancouver Island, Vancouver, Washington state, and even a few other hikers in the area. While I was able to reach VE7KCY who was activating on Goat Mountain from Unnecessary Mountain, I arrived at my own summit too late to take advantage of any S2S contacts. Fortunately there were enough HAM operators wandering the woods and ridges that day to make for some interesting conversation. Typically I use a 1/4 wave telescoping antenna (2m) for SOTA work. It has two pivots and a swivel built in, so when I store it the entire package isn’t much larger than the body itself and I’ve gotten some excellent signal reports with it, even on low power. A friend had recently put in an order from a Chinese online retailer and included a 5/8 wave telescoping antenna that I offered to try out. From the summit I was getting better results with the 1/4 wave, though once I got into the woods the 5/8 antenna was pushing through a bit further.

I stayed on the summit for about two hours, then began the long trek home. Downclimbing the two cruxes was a careful, deliberate process, and once accomplished the rest of the way back was a simple matter of retracing my steps. 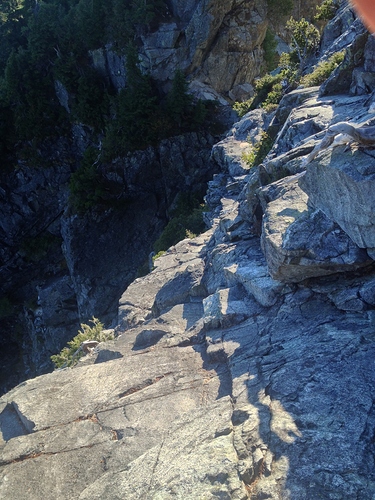 First crux from the other end

Having passed the tricky part while the sun was still up I could relax and take a few minutes for some sunset photography and fantastic views of Howe Sound. While I usually try to arrive back at the trailhead before dark, I was carrying two lights, extra batteries, a SPOT, map, compass, and GPS so I wasn’t too worried about returning after nightfall. The trail is also well marked and only goes one place. YMMV, but I got some fantastic pictures without having to lug a tent and sleeping bag with me. 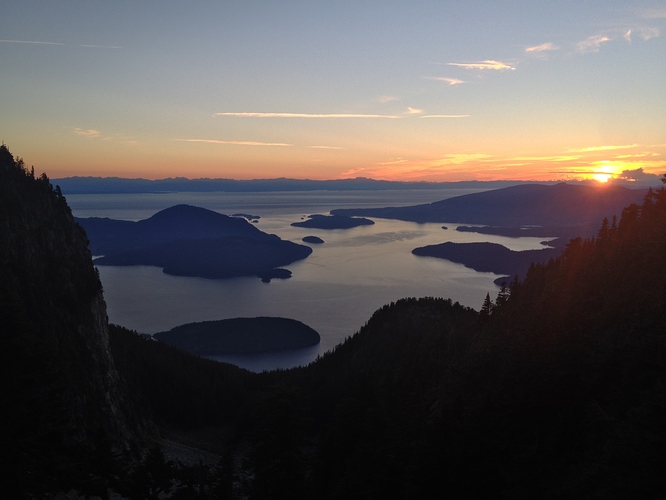 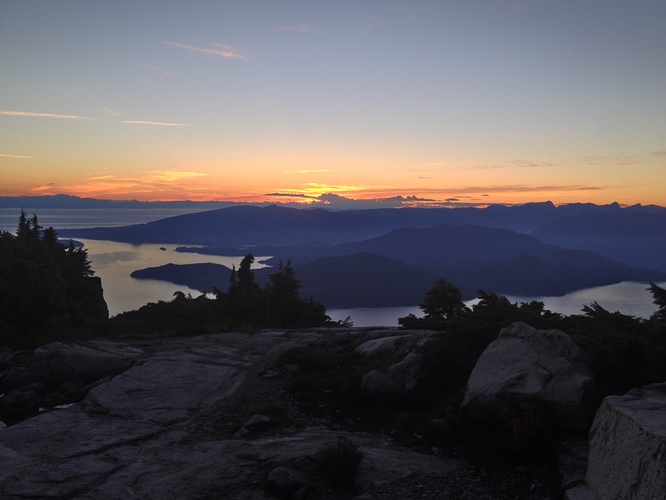 Protip: if you’re on Unnecessary Mountain and getting views like this, you’re either camping there or finishing up via headlamp.

I arrived back at the car around 11:00pm making for a 12 hour day, including rest stops and activating time. This was a summit I had been eyeing all summer and it felt good to finally knock it off. SOTA is relatively new in VE7 so this was the first time the West Lion has been activated.