I was always battery powered even at home so my question might be basic!

I have the 857d and I TX on 2m 10watt (or 5w cant remember). PS starts whining a bit more rhythmically and on the DC cable I see this (coupled, this is AC only): 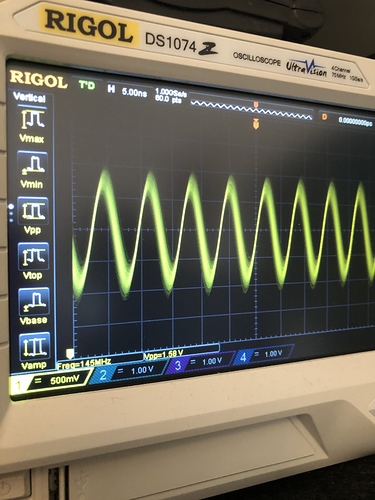 Radio has no CAT or Audio connected. Only a 2M antenna.

Picking up your transmitted signal on the PSU/cable. The scope says 145MHz. Time to put your RAE training into practice finding out why there is RF pickup and how to cure it.

At one level I wouldn’t be bothered, the FT-857 like many modern rigs is proofed against RF getting into it from the wrong place. If you look on the circuit diagram you will find a whole array of capacitors and inductors to removed the RF from the power lead before it causes problems in the rig. The PSU is switch mode so a bit of RF could make it change its “tune”. If works don’t worry too much.

At annother level it becomes an interesting investigation.

Power sockets are choked and DC cable is chokes with 31 material for lower MHz though.

Where is your antenna placed with respect to your PS?
I have experienced some PS don’t behave well when they find a too close antenna radiating 144MHz.
Some PS I’ve seen in the past did rise the output voltage under the very close 144MHz RF field and that fried and killed the 2m transceiver.
I also owned a PS behaving the oposite way, the output voltage dropped down under the very close 144MHz RF field and the resulting too low voltage produced the rig switch OFF. The solution in this case was very simple: just a small capacitor welded between the ground leg and one other of the legs of the integrated circuit in that PS cured the problem. My friend, Mark KB3CI, an electronics engineer I worked with at that time in Sterling Heights, MI, USA, immediately solved the problem I was having whenever I tried to transmit with my HH Yaesu FT-470 being powered by a 12V PS I had just bought 2nd hand to some local guy, back in 1998. Unfortunately I don’t know more details about the brand and model of that PS, which I gave to Mark KB3CI when I left the US and got back to Spain in 1999.
One other effect I’ve seen in the past is the one you are experiencing, producing an awful AC ripple.
Shielding the PS and cable or augmenting distance between your antenna and your PS might minimize or completely cure the problem.

AC ripple and the associated rhythmical whining sound exist even if I TX on 14mhz too. On perfect SWR EFHW (no tuner).

What has the SWR got to do with EMC issues?

Where are you applying that scope probe to see that 2m RF voltage?

sorry Im not saying SWR has something to do, but at least Im not expecting a lot of RF back and the antenna for 14mhz is far away from the PSU (20meter coax)

I scope on the power lead. I have an extra power lead for the KX3 so I can scope there.

antenna is a home made dipole and its indeed close. 2 meters from the PS and the radio.

2 meters from the PS and the radio

If you could increase the distance between your antenna and the PS, the RF field around the PS will get reduced and the undesired effect will get reduced or even eliminated.
Grounding the PS housing will also help.
Shielding your PS by putting it inside a better Faraday cage than the current housing it may have, will reduce the RF field affecting its electronics and thus will reduce or even eliminate the problem.
Good luck!
73,

Or connect a dummy load instead of antenna. This would eliminate one variable.

On perfect SWR EFHW (no tuner).

bringing all that nice RF back into your shack

There’s too much RF by the PSU. Meanwell PSUs have a decent reputation and allegedly pass EMC testing. The 857 should work fine in high RF environments, I’d blame the PSU first.

For HF and an EFHW, I’d guess there is significant RF on your coax that is radiating into the shack.

It suggests the filtering on the output of the PSU is poor or missing or being overloaded and your choke is not in the right place or right type. Dressing the cables and positioning the choke as close to the PSU should help.

It’s 22 years since I did EMC testing on medical devices as part of my job and I hated it then and hate EMC now. But a 10W erp interference level should be fixable easily.

Are you sure of the measurement quality ? If you connect the scope probe leads together and touch the ground side of the PS does the scope show any RF present ? Are you sure you don’t have a loop formed between the PS input from the mains and the power cord for the scope ? Have you plugged the scope into a mains socket that is adjacent to the PS ? Have you tied the scope ground to the PS ground at the chassis of both ? These are just suggestions to make sure there is not an induced current through the scope that is giving you a false reading.

No Im not sure! I need to do what you said first! Thanks!
I was just planning to do a post asking about this exact problem. As i realised that scope ground = mains earth.
Ill come back with results!

At the moment I have moved the 2M antenna outside and I cleanup my cable mess. I think the RFI is better.
My main power is filterer with the DIY filter below (from RSGB lecture) and the DC has this 31 material ring. 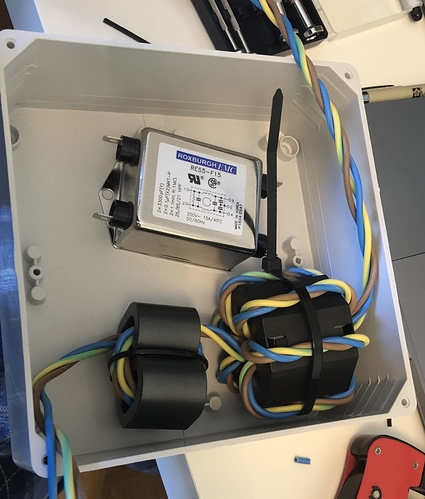 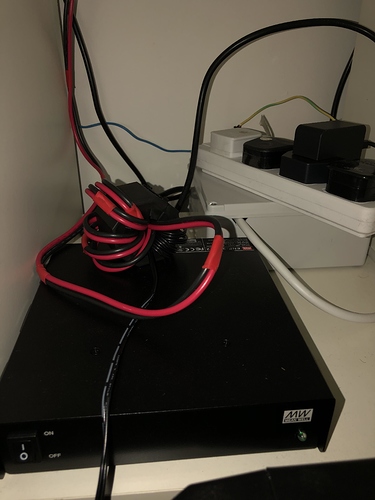 Ill double check with the antenna that is choked (12T on 240-31) on feed-point and has good counterpoise.
I think its was also my bad cable management…