Absolutely nothing to do with SOTA

but if you are interested in what a ridiculously amazing contest station looks like click on to see snaps etc of a station in Maritime Canada that I operated at recently.

Her smile is quite welcoming and I ask permission for a photo. In that moment of exuberance I put my hand behind her shoulder. She seems oddly cold and rigid. It’s late and maybe like me her …

PEI is a great place. My old elmer moved there a year after I moved west.
Malen
VE6VID

To help you with a SOTA link; maybe Compton had something like this in mind with his Thread?

This is the antenna I was heard via a couple of weeks ago: 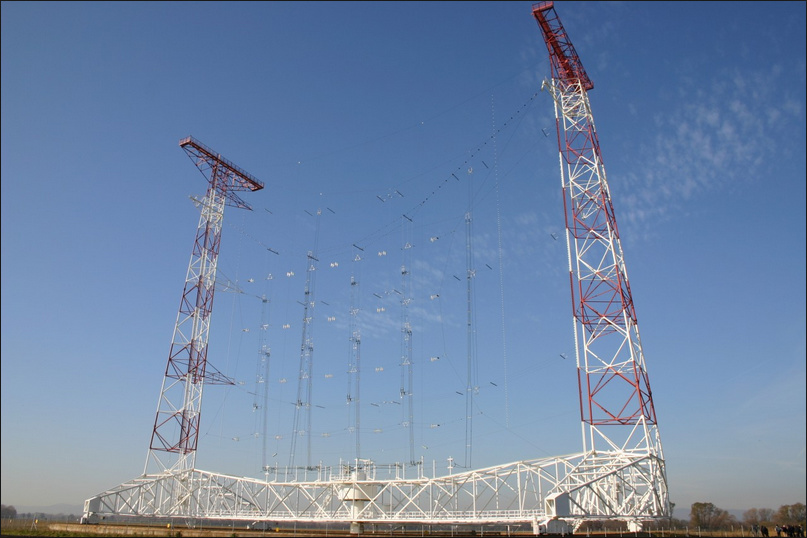 The 20dBi gain curtain antenna at ORS near Vienna in Austria - and the transmitter - 300kW of AM on 13860Khz for a special DARC-Radio broadcast on the WRTC. (for which I recorded several interviews).

Interestingly the curtain antenna is wide band and covers from just under 40m to just above 15m amateur bands - so even a QRP rig feeding this would be heard “quite well”. Oh yes…the site manager is a Ham by the way!

Hmm, I wonder what it would cost to rent just the antenna for a contest weekend …

This is worth a look - even though the commentry is in German, you’ll understand it via the pictures (from about 20 minutes in is where you want to be):

Also here’s the MP3 of the broadcast that I referred to (this is in English):
http://www.alximedia.de/radio/DARC-Radio-14072018-stereo.mp3
(my interviews start around 22 and 45 minutes in).

Little story for ya

Had a QSL card and photos from Guam’s KTWR showed antenna s even bigger than that and see two specks on it of two engineers. With mate in pub chatting to these nice young lady’s asked what we do for living. Told were on Hols off to Quito shortly and here’s a photo of us at work on island of Guam couple weeks ago repairing the antenna system. They were well impressed. my mate could not believe the crap i was coming out with and quickly joined in. See if radio subject can be a good chat up line LOL

Bang! Mention of QSLing broadcast shortwave (or medium wave) stations coupled with the prolonged dry weather and heat we’ve had in the UK and the fact I’m listening to Presence by Led Zepplin and time travel becomes possible. I’m transported back to the summer of 1976 and my schooldays “dxing” on broadcast radios or the new FRG-7 at school.

I blinked and 42 years passed.

Hmm, I wonder what it would cost to rent just the antenna for a contest weekend

There are plenty of rumours flying around that a certain OK station does just such a thing with another BC antenna during the CQ WW 160-meter contest. Just sayin’…

Absolutely! It’s on what look like train tracks and for the WRTC it was pointed at North America but covered North and South America, Japan, New Zealand and (off the back of the antenna Russia as well). Amazing what you can do when you don’t mid wearing out the bearings in the electric meter HI!

Mention of QSLing broadcast shortwave (or medium wave) stations… I’m transported back to the summer of 1976 and my schooldays “dxing” on broadcast radios or the new FRG-7 at school.

Time shift back about 10 years - for me it was the Marconi T38A at home or the Eddystone 840C at school. I was “stalked” by Radio Polska and others for many years after submitting SINPO reports to them. The album was Pet Sounds…

I now own an 840C and can get a nostalgia fix whenever I wish.

get a nostalgia fix

Well I think they sound sublime. No space for one sadly.

I now own an 840C and can get a nostalgia fix whenever I wish.

My first radio after the phase of modifying R1155s was an Eddystone 840A. An impressive looking radio but its performance was - shall I say pedestrian? At least I improved the selectivity by moving the IF transformer ferrite cores to the outer resonance points. The C model came out just after I bought the 840A! A friend bought one, it was no better than the A other than that tuning indicator.

…other than that tuning indicator.

Oh the indicator that doesn’t work. Mine has gone u/s and I am in no rush to replace it. The sensitivity of the 840C on the upper range has always been fairly poor, but I have copied SOTA activations on all bands from 80m to 15m. The main advantage of the receiver is the relaxed audio quality which for makes it ideal for protracted listening periods in the evenings.

If anyone wants a bit more of a nostalgia fix…