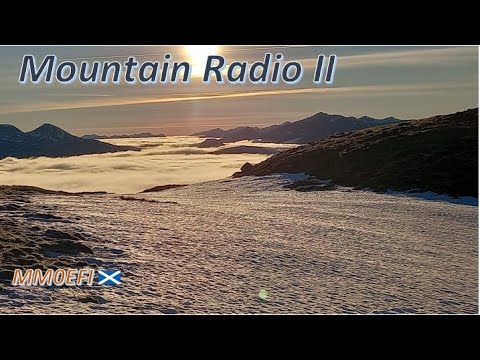 I always try to get up a hill on my last day off before Christmas. The wx forecast for Western Scotland looked to be the best, with the strong chance of an inversion. I decided on Beinn a’ Chaorainn 1049m GM/CS-012 and Beinn Teallach 915m GM/CS-044.

MONDAY 20TH DECEMBER
I left home at 0545z and had an ‘interesting’ drive across the Central Highlands, with frosted roads over the Lecht and 20km of black ice between Tomintoul and Granton-on-Spey. At least I now know that the Land Rover’s brakes are balanced - it skids in a straight line! (No ABS brakes.)

I set off on the hike at 0820, parking just a few hundred metres to the east of the Laggan dam. There’s room for a few cars at the trailhead, with a larger car park along the main road.

The first photo illustrates the wx. Very grey and sub-zero. 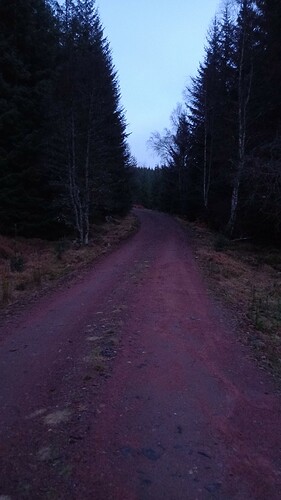 The Land Rover track gave way to an ATV track after 1.5km. It started to ascend the broad grassy ridge of Beinn a’ Chaorainn. The track then became an indistinct path. Now, here is why I picked today for this hike. The ground was frozen from low altitude. This made the frozen grass and mud straightforward to ascend. Once thawed it would be really heavy going and it probably would be like this for half of the ascent. 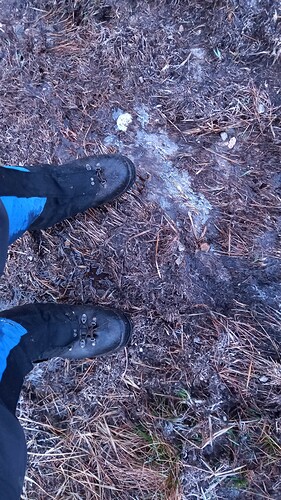 I was just starting to think if the cloud would continue all the way up when I spied some jet vapour trails in the sky above me, and a hint of blue through the fog.

Eventually I broke through, just in time for sunrise and a wonderful mountainscape of peaks floating like ships on the sea of cloud. 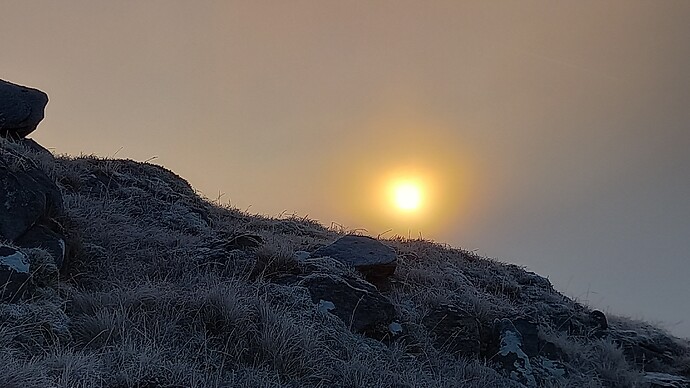 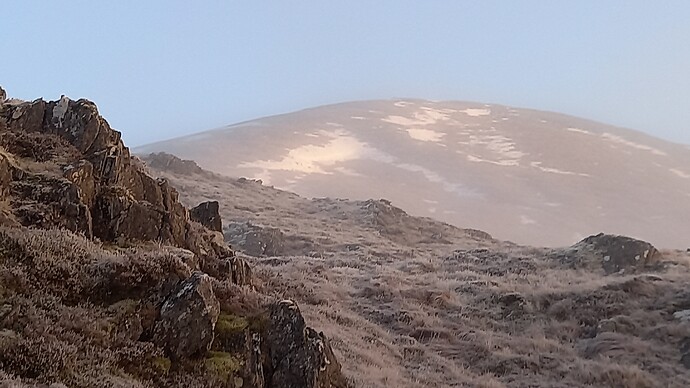 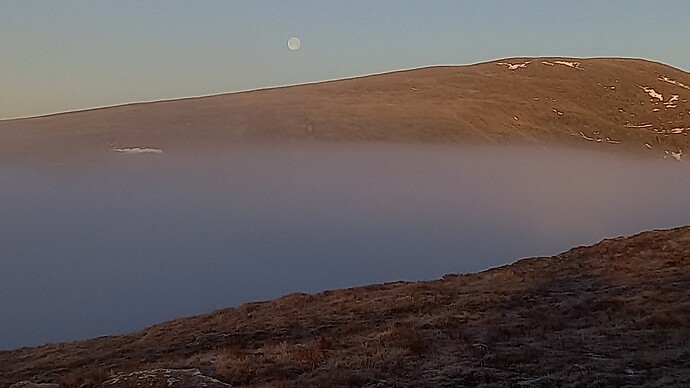 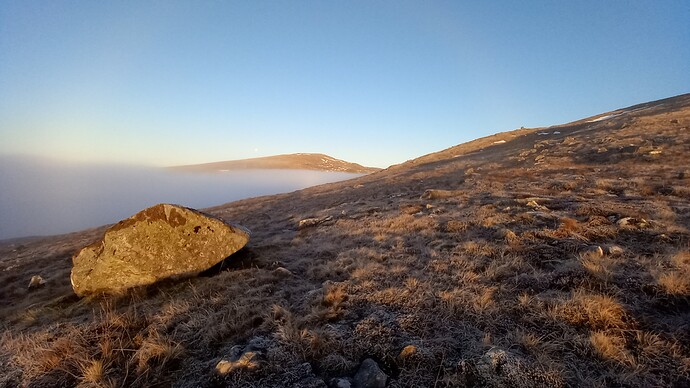 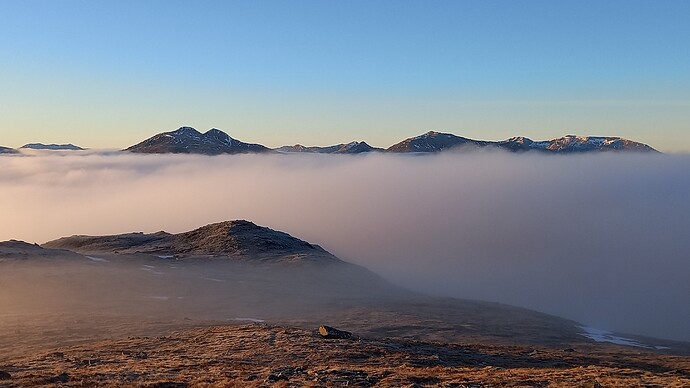 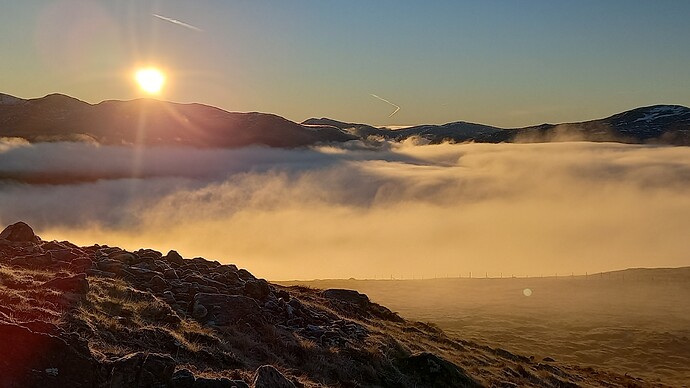 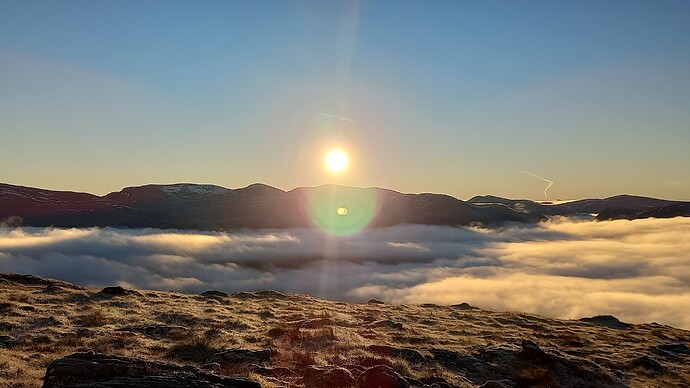 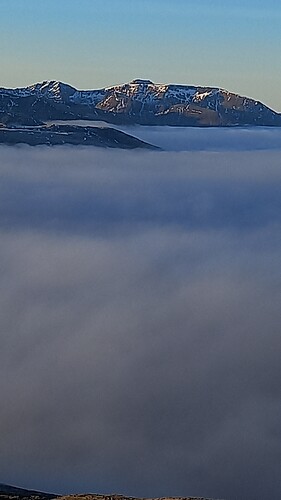 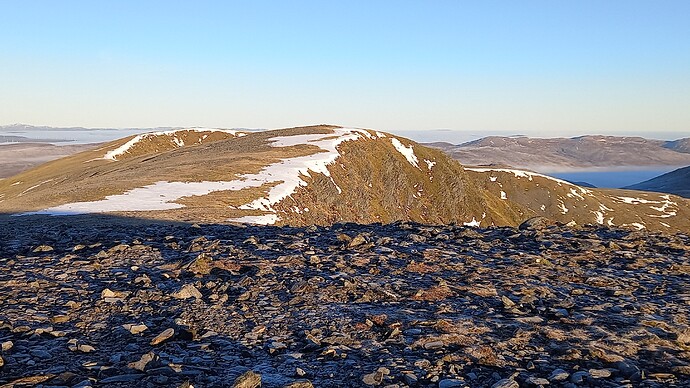 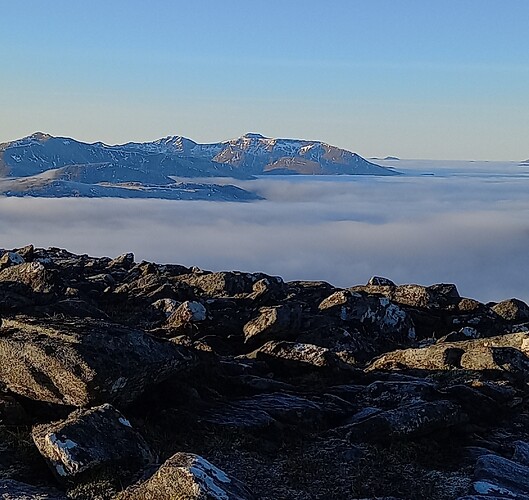 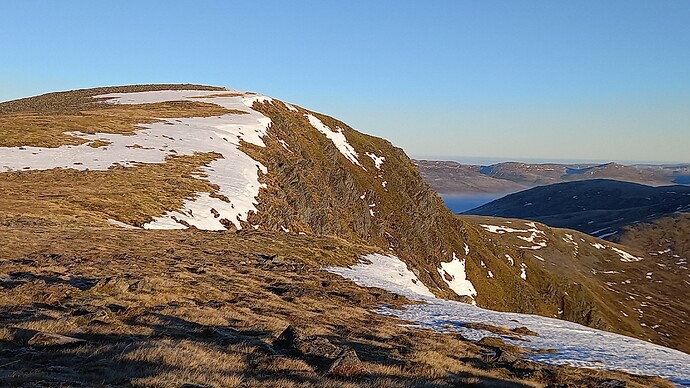 The direct ascent continued up towards the subsidiary top and then it was a simple march along the edge towards the summit of Beinn a’ Chaorainn. 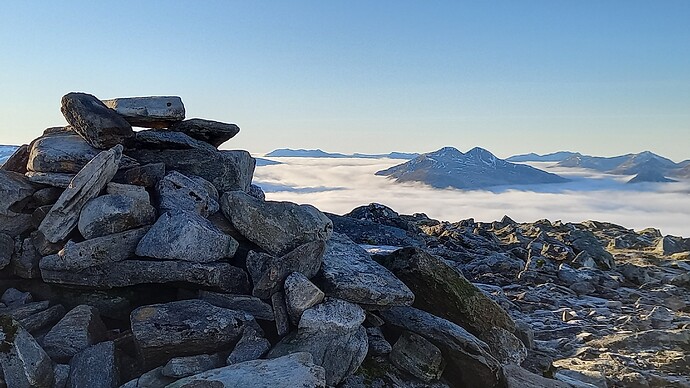 Cue an almighty pile up. And an amazingly short skip, allowing me to work a handful of GM and GI stations as well as the usual G, GW, F, EA etc. @GM0GAV came on the mic. for his Complete.

I then popped onto the handheld, expecting a few locals to be looking for my 2m Spot. That brought @GM7PKT Robin, and local chaser Gordon GM4OAS.

I’d packed up and was just heading off the summit plateau when @2M0KZN Jonathan came crackling through. He was nearly at the top of Lochnagar. I was still in the AZ, so I decided to take an early lunch and wait. 20 minutes later a summit to summit over to GM-ES-008, using handhelds both ways, at around 86km.

That put me behind schedule. Shane @G6WBS had messaged me earlier in the week asking if I was out Monday. He was going up Ben Nevis GM/WS-001, arrival time 1300 and was looking for a summit to summit. I planned on being on Beinn Teallach at 1300 but it was now looking like 1330, so I got a march on, Descending rocky and then smoother grassy slopes towards the watershed, I dropped back into the freezing fog as I went. As I dropped, I heard Shane put out his CQ on 2m and I managed to work him for the chase. He was early! 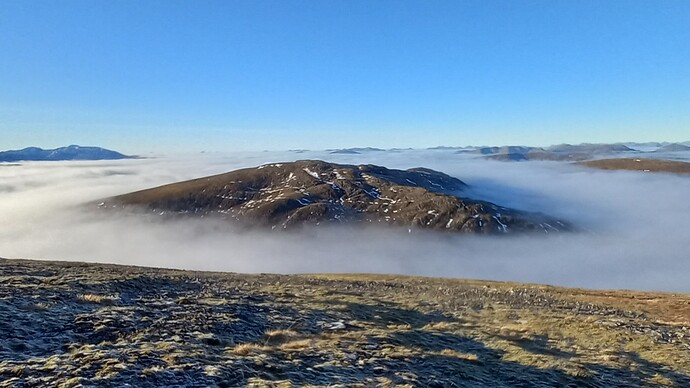 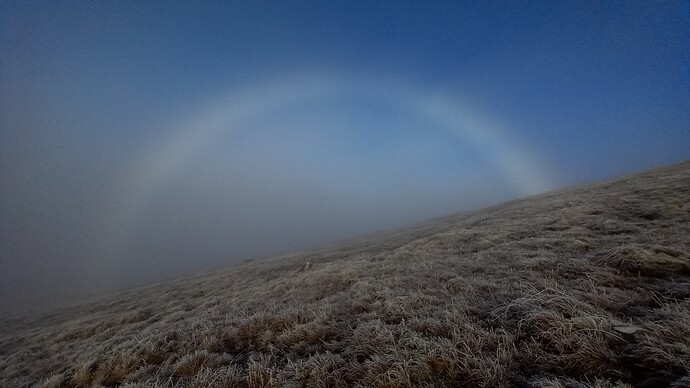 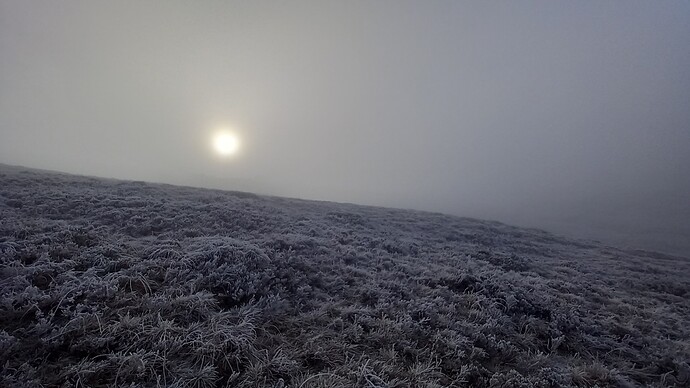 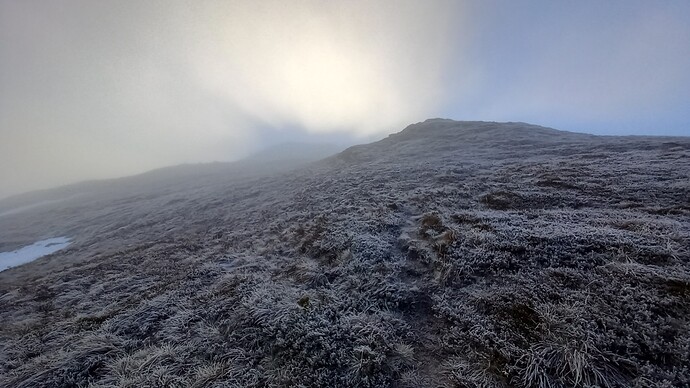 At the watershed I found mainly frozen bog and peat hags, followed by steep frozen grassy slopes that eventually led to a rocky maze of outcrops and knolls, which only eased at the summit cairn. 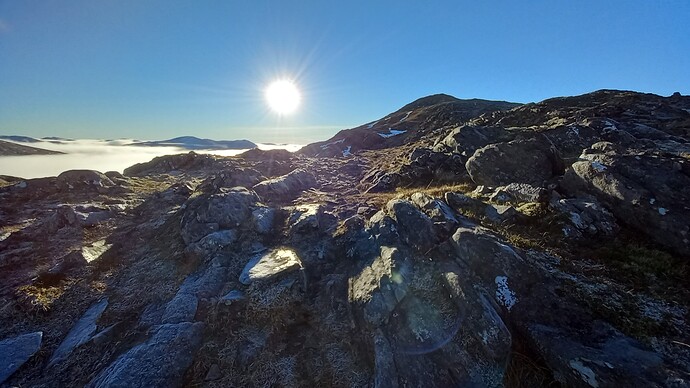 It was 1310 and I’d covered the ground in 30 mins less than planned. When I got my breath back, I spotted and called on 2m, working Robin again, Shane and surprisingly Jonathon, who was still on Lochnagar. Shane and I had a good yap and we both agreed that this was the best mountain day we’d had in ages and that we did not want to leave our respective summits!

I couldn’t make that elusive fourth contact on 2m. I’d brought the cables for my beam but neglected to pack the actual aerial!

I set up the W3EDP/kx2 combo. I then noticed that I’d been running just 5W on the last summit. Last time out, I was using it with a 40w amp…

40m was the usual afternoon QRM, so with 11 stations in the log I switched to 20m for a quieter experience, making a further 16 contacts, with AC1Z giving me 3/3 from across the pond. I worked a further 3 S2S (into Spain and Switzerland), making it 6 for the day. 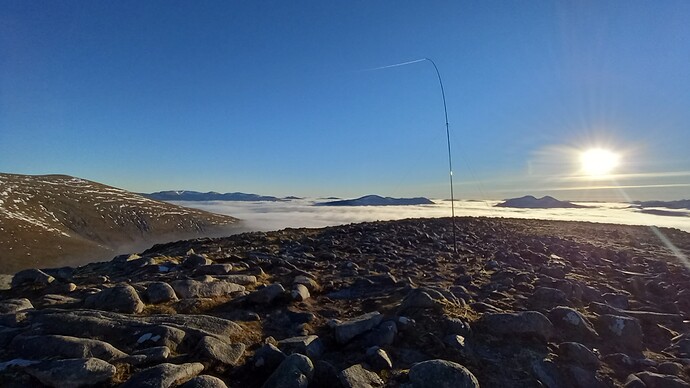 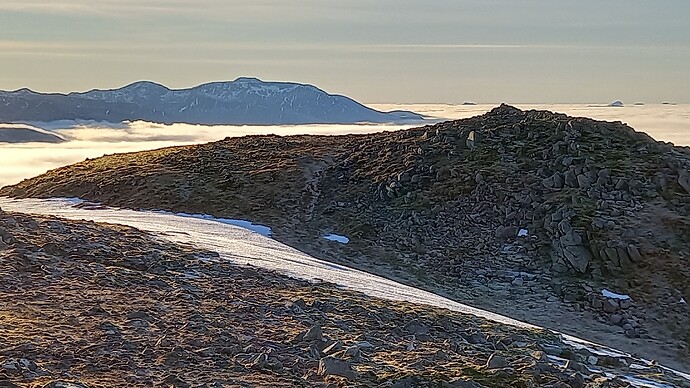 It was now 1415 and I really needed to get moving if I wanted to be down by dark. I was loathe to leave my summit, however the views on the way down kept my spirit high, until I hit the fog that is. 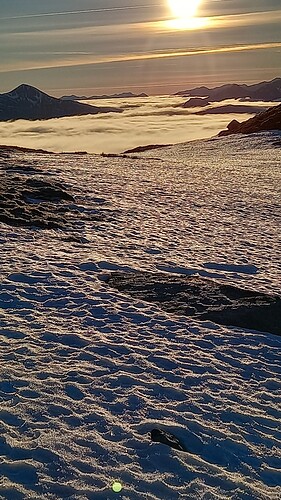 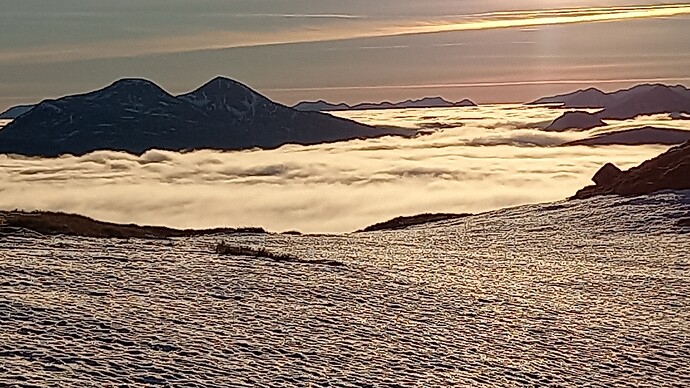 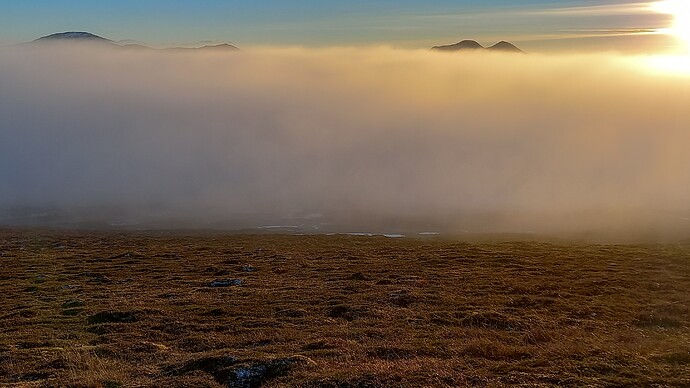 The broad grassy slope was mainly featureless and it was also endless. Despite GPS I kept drifting off to the right and was having to constantly correct. Eventually a new deer fence was reached and crossed (gate). Here I picked up a muddy ATV track that was thankfully frozen. This eventually became a grass track and I followed it to, and across shallows of the Allt a’Chaorainn. From here is was 20 minutes on the forest track, arriving back at the Landie around 1600. 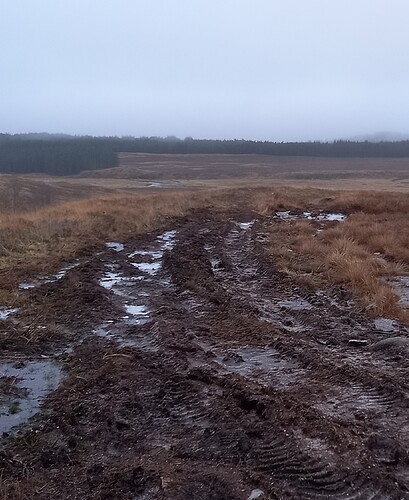 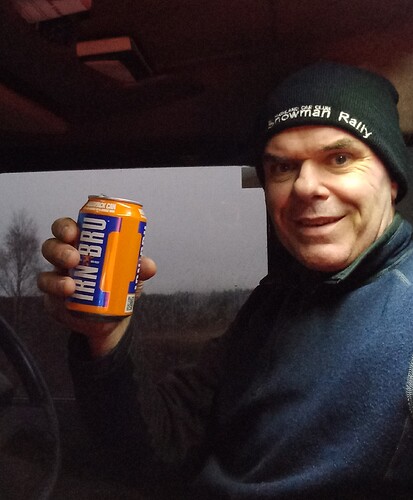 I was carying full winter kit as I couldn’t be sure of the conditions. The ice axe and crampons were not needed. You’ll see from the pictures that there has been a thaw after early season snow. The winter boots and double socks certainly were needed on the frozen ground.

@GM0GAV asked me on another thread if it was “Manky” on the hill today. Well no mainly, but these would sure be manky hills in wet mild condition and any climber would end up manky having climbed them!

Finally, it’s all work, work, work from now until Hogmanay (31st December), so it was nice to finish on a high, with a memorable hike and two nice activations. Thanks Chasers and fellow Activators!

Thanks for another great report and some beautiful photos. Looked like a stunning day to be out on the mountains.

Thanks for a lovely report and photos, what a grand day out!

Thanks for sharing Fraser. Glad we took advantage of this Scottish inversion.

Fingers crossed for some nice weather in the new year.

Merry Christmas and Happy New Year to you and your good lady.

Knowing where and what you do for a living I was surprised you could get time off around now but your comment till Hogmanay makes sense. I hope things don’t get too mad for you

I knew the WX would brilliant once out of the murky fog but I’m mad busy at work and also at home rebuilding the shack, so no SOTA for me. You watch once I finish tomorrow evening how the WX turns to rubbish for the next 2 weeks!.

Good photos of this pair, they’ve been on my radar for a while. Interesting on the mankiness, it’s why I’ve avoided them till I could get a good report on the ground. I wont be doing them unless we’ve had a long dry spell or unless they’re frozen! Also good to know the crossing is not wild.

That may be full-fat Bru but it’s still doesn’t have as much sugar as of old. I know of someone who is considering starting their own company to make a clone of the Bru but with the original sugar level. Yes, it will get hit with the sugar tax but he reckons he can do a Brewdog and milk the outrage and bad publicity it will attract! Sadly my Pancreas is far too knackered to cope with that much sugar now.

The fogbow photo is good.

I’d avoid Chno Dearg GM/WS-032 across the road for the same reason. We did it on the first day of our September holiday. That was the boots soaked…

While I’m here, I was surprised that my two have CS geographical locations, yet the ones south of the A82 are WS. Not an issue for me, just an observation (for me!).

Excellent weather Fraser, you were lucky to have frozen bog! I remember it was horrible and wet, but I had more snow on top late October '19! 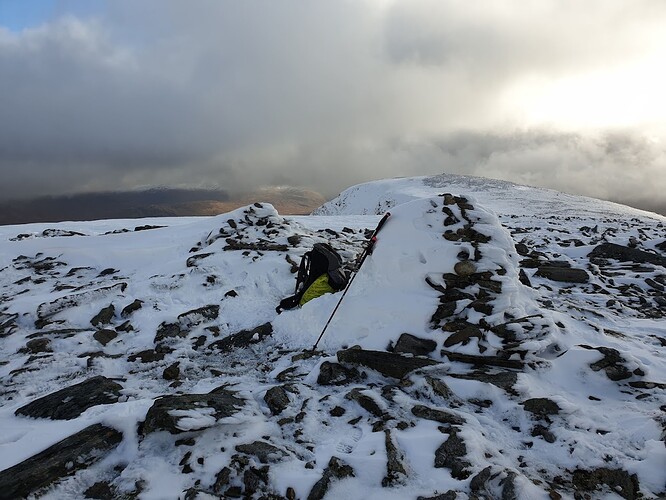 The subdivisions of GM have never made sense to me, but that’s because I am used to the MCS system! (I mean, really? Summits North of the Highland Boundary Fault are Southern Scotland? Boggle!)

I’ve seen some fine temperature inversions in my time, but that pictured above rates with the best.

Many thanks for another excellent report Fraser and some truly spectacular photos. Somehow I managed to be out of the shack for your 40m sessions and I missed other activations as well. Such is life.

Wishing you and Mo an Enjoyable, Happy and Healthy Christmas and New Year.

Hi Fraser, a great report and photos. Thanks.

Fingers crossed for some nice weather in the new year.

Thanks for hanging around on The Ben for the S2S Shane. Great to have a short ragchew with you.

Lovely photos Fraser. Thanks for the contact and a merry yuletide to you and Mo.
Best 73

Great pics Fraser! Sorry I couldn’t hear you on 2m from my garden. Have a great Christmas and New Year.

Sorry I couldn’t hear you on 2m from my garden.

Thanks for trying Simon. Given that I barely made contact from a Glenshee hill to your garden earlier in the year, I guess it was a non-starter to the west coast. I did hope there would be a bit of a lift on given the wx though.

Thanks for the chaser points Fraser. It was good to get a few summits from the work QTH.

Reminds me of the day I first activated these hills for SOTA. 18 years ago this month in very similar conditions.

Have a Merry Christmas and Happy New Year. 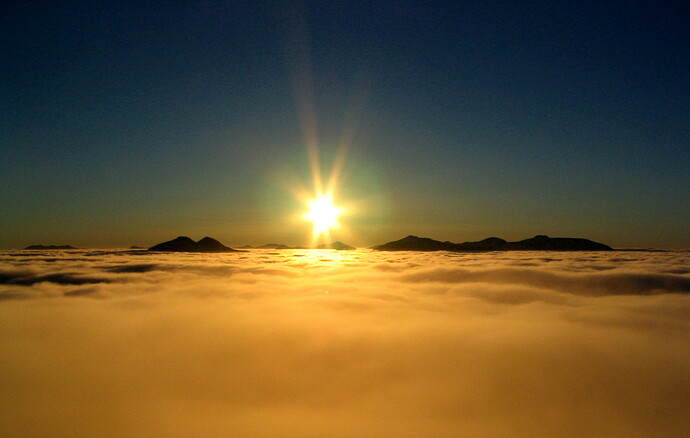 Thanks Robin. That’s an amazing shot!

As I told you over the air recently, I hold you responsible for getting into this! So, thank you for that too.

I’ve popped my video into the report for anyone who’s interested.

what should I say, your activations, your report and your pictures - perfect again. Thanks a lot.
Marry Christmas to you and Mo!

Hi Fraser, what amp are you using and where did you get it

what amp are you using

Hi Geoff, It’s an mx-p50m 45 watt amp that I bought off of ebay. It is fed with 5 watts max RF. I used it on my previous activation and received signal reports one or two s-points up, which I thought was great. Then on this activation i mistakenly left the radio set to 5 watts (I usually run 10-12w) and I worked all the same stations again on 40m with great reports! So, as you know, a lot of it is down to band conditions on the day.