An evening ascent from the Rhyd-Ddu car park. With very fine weather this was an enjoyable walk, with paths more or less all the way to the top. Activation on 2m was readily accomplished. With the light fading and low cloud moving in, I hastily setup my SOTABEAMS “tactical” mast with a 40m dipole, made 9 ‘fairly local’ SSB contacts and then started the journey back to the car park. 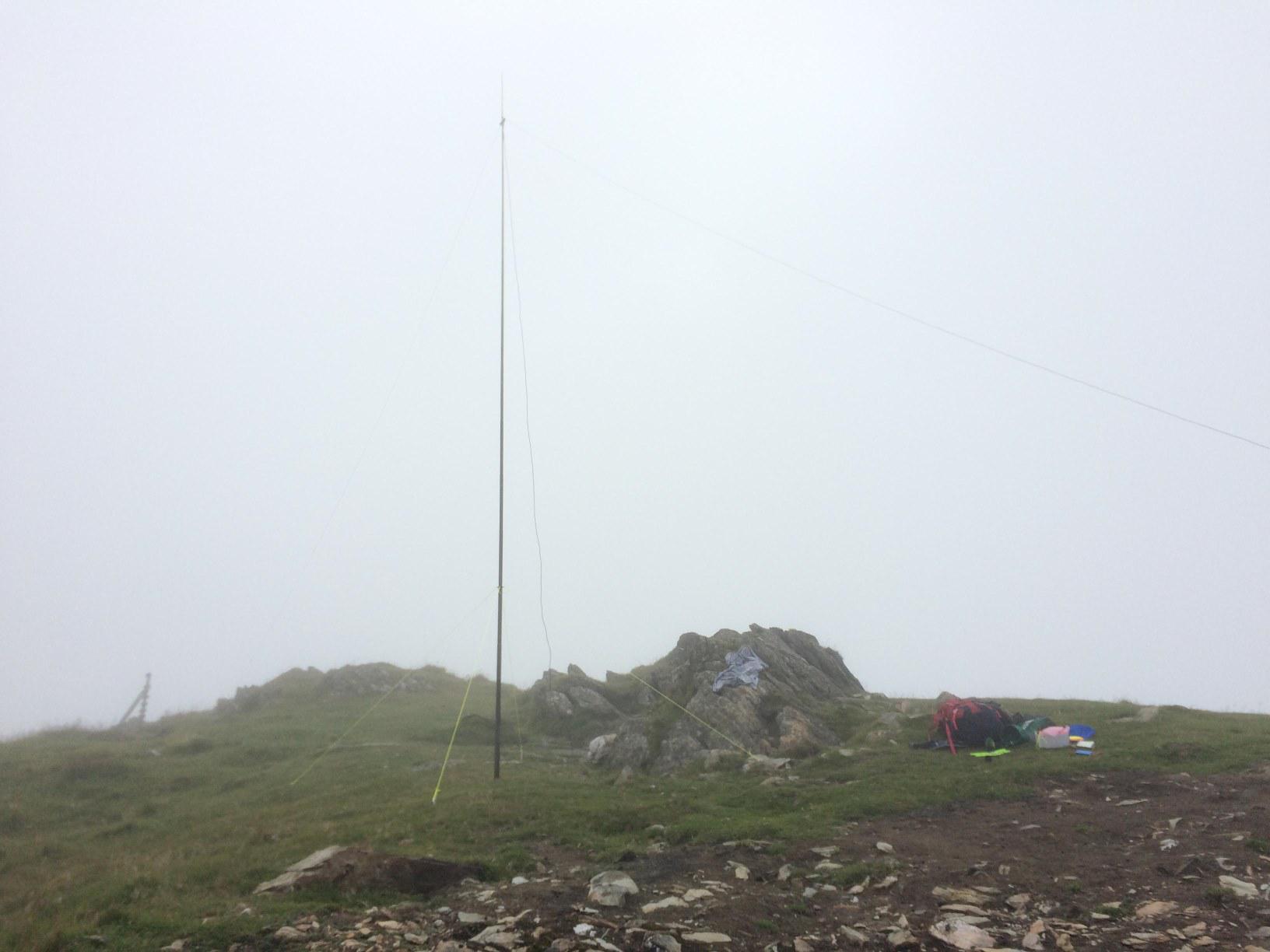 Starting out early from the Ranger Station car park, I took the main path towards Snowdon before turning left at a ‘T-junction’ to head to the base of Moel Cynghorion. An easy walk up the side of the grassy hill saw me at the summit around 9AM. It took a little effort to activate on VHF, probably due to the time of day. As my plan was to do four summits today I decided to push on after 4 QSOs.

The walk across to Moel Eilio had a reasonable path to follow. The early morning low cloud had cleared and the weather was very good. A fair bit of up and down along the way had me hoping for a quiet summit, however it turned out to be the busiest of the weekend - probably due to the easier access route from the north. I completed a quick VHF activation with my VX-6 - the band was still quiet and I had to wait a while to get the four contacts. The summit was breezy with a thick mist arriving shortly after I did. I setup the 40m dipole with the FT891. Possibly helped by people being on for IOTA, SSB traffic around 7160khz came in thick and fast. This was my first experience working a pileup on HF. Successive calls of QRZ resulted in dozens of stations from all over Europe answering all at once, which was challenging but entertaining. By this point I was behind schedule so as the pileup died away I closed down. 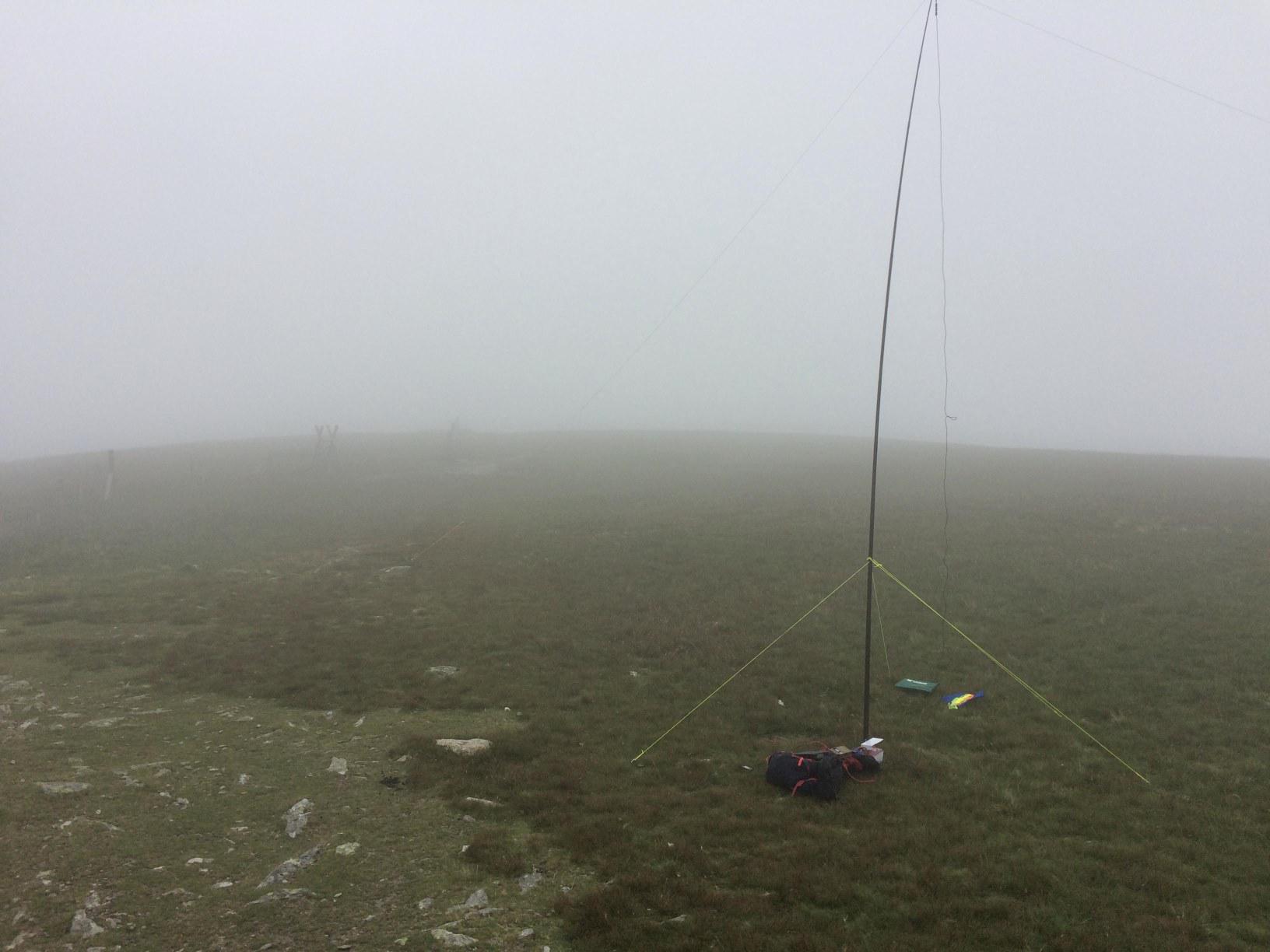 I parked at the reservoir to the south of Moel Hebog. I left the HF equipment in the car to reduce weight in the hopes of making up some time. Access to the reservoir was not great along a long narrow uphill road with very few passing places. After a quick lunch I started my ascent up the southern slope. Apart from stiles over several walls there was no path to follow and progress was slower than hoped. Half way up, the weather set in and visibility reduced to less than 10 feet. Still clinging to the idea of spending the evening on Craig Cwm Silyn working another 40m pileup, I made a quick activation with the VX-6 before heading back down. Running about 2 hours behind schedule, I admitted defeat and decided against a night-time descent on Craig Cwm Silyn and rearranged my SOTA alerts accordingly. 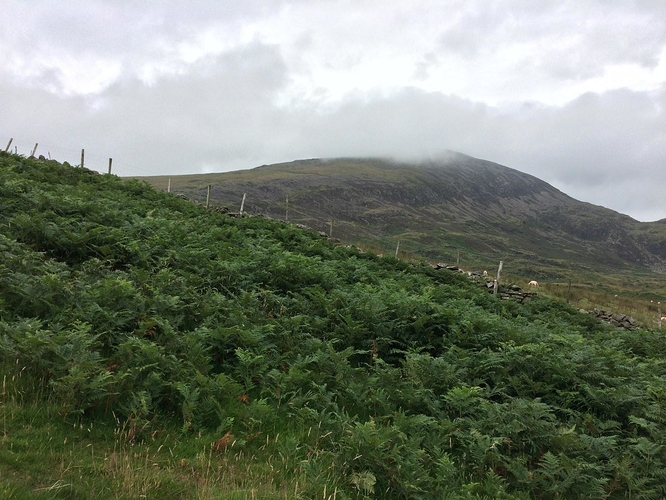 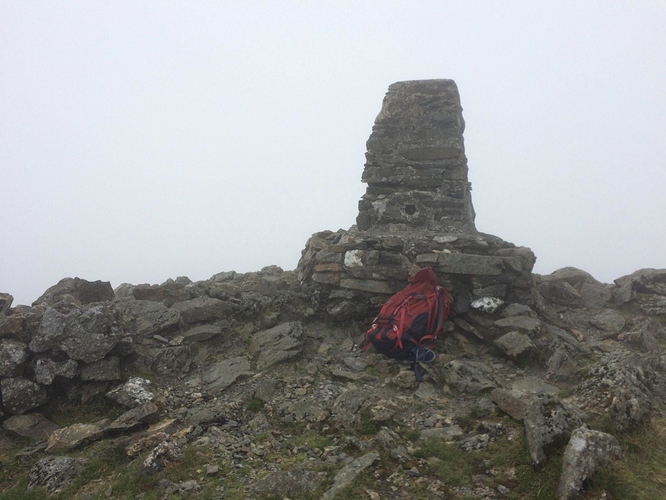 The original plan was to do this summit late on Saturday and complete Snowdon via Crib Goch on Sunday. As the weather was deteriorating and I had already activated Snowdon this year, I decided I would be better off completing Craig Cwm Silyn and skipping Crib Goch. Still, at least I would have plenty of time for lots of 40m QSOs, or so I thought. I parked in a small ‘car park’ at the end of a farm access road. It is private land but there is a sign stating day-time parking is allowed. Setting off down the track, the summit was shrouded in cloud. During the ascent weather deteriorated to strong gusting wind, thick mist and drizzle. The summit was deserted and damp. A quick VHF activation with the VX-6 was undertaken. Being arraigned of piracy due to “not being on QRZ.com” offered a brief distraction from the weather. I set about erecting the mast and 40m dipole in strong winds. The summit is a large boulder field with no soil for guy rope pegs, so some gentle reorganising of the rocks was in order. Just as the antenna was set, the drizzle turned to driving rain and it was clear I needed to abort the HF part of my activation and get back to the car. This was disappointing to say the least having hauled up a 35lb backpack. As I started my cold and wet descent, feeling not unlike a winter activation day, my thoughts turned to the tourist asking for directions at 7AM in Rhyd-Ddu looking to attempt Snowdon in shorts and trainers. The hottest day on record in England last week was at this point a distant memory. The low cloud and rain followed me all the way back to the car and I started the journey home, pleased that I had obtained all of the SOTA points I came for but ever so slightly disappointed I didn’t get more time on HF. 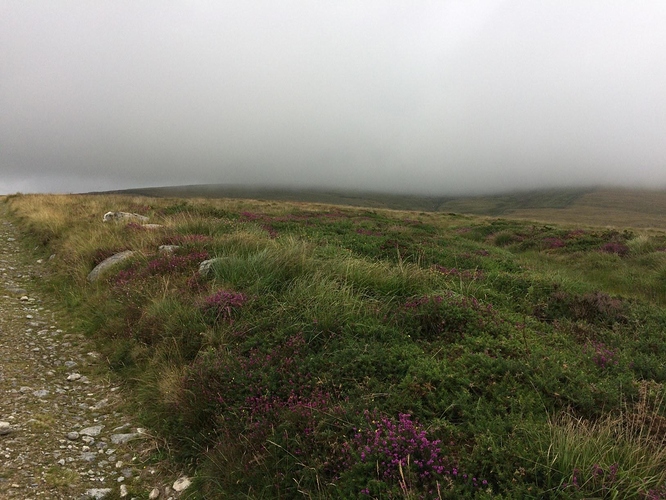 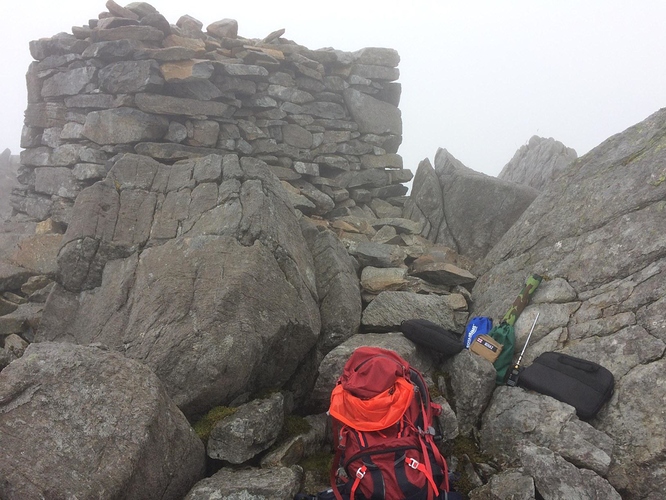 This was my first foray into HF SOTA having previously only used 2/70. It was a bit hit and miss at times, so apologies to anyone who saw my alerts and was listening out. If I didn’t answer you on GW/NW-022 it would have been due to QRM.

Carrying both the FTM100 and FT891 together with their antennas and batteries was (unsurprisingly) rather heavy - for future HF activations I will rely solely on my VX6 for any VHF work to keep the weight down. Perhaps one day an Elecraft KX2 would be a wise investment…

Many thanks to @GW4VPX and @MW0OFA for their support during the weekend, and all the other chasers.

Well done Richard. Glad to be of help over the weekend. Looking forward to your next visit to GW.