After two days of walking and activating in the Scottish Borders SOTA region we had one final day before travelling down to Yorkshire for the weekend. The weather had been quite a bit on the wet-side compared with the south of the British Isles which was still bathing in glorious summer sunshine.

Another lethargic morning (it’s so much better waking when not being ruled by an alarm clock!), but this morning was grey, damp and very much cooler and the forecast was not good for after lunch. Should we do an activation or laze around, read a book and chill? Chatting over breakfast it occurred that we seldom get this far into the remote parts of Northumbria and if we didn’t climb a hill in this region today when would we be able to make the next opportunity? The gentle dripping of the rain on the camper roof and the thought of getting damp didn’t add to our enthusiasm.

Peel Fell (G/SB-004) was actually the nearest summit to Bellingham and getting there involved a pleasant drive along the southern side of Kielder Water. It originally wasn’t going to be activated on this trip; two 1-point South Scottish summits had been researched (but so had Peel fell just in case). The choice was between a long drive and perhaps two single-point completes or just the one summit, a 4-point complete. Actually the selection was simple: get wet on only one long walk.

Looking over Sotawatch information and previous reports we had two possible routes to the summit of Peel Fell. One involved a walk up the southern forestry tracks and a steep walk to the radar station at Deadwater Fell before a long flattish walk picking out a weak trail in the heather following the ridge. The other possibility was a gentler walk through the forest before a steep sharp climb to the summit. We chose the latter.

Parking was near Kittythirst cottage, just to the north of Kielder Forest and Water, on a small pull-in opposite one of the main Deadwater forestry tracks. The track heads roughly northeast to the south of the English-Scottish border. Very soon after the beginning of the walk rain became more persistent, necessitating donning water-proof coats. The rain gradually got worse as we climbed. During this section of the walk we could see up the side of Deadwater Fell and the elevated radome silhouetted on the skyline. 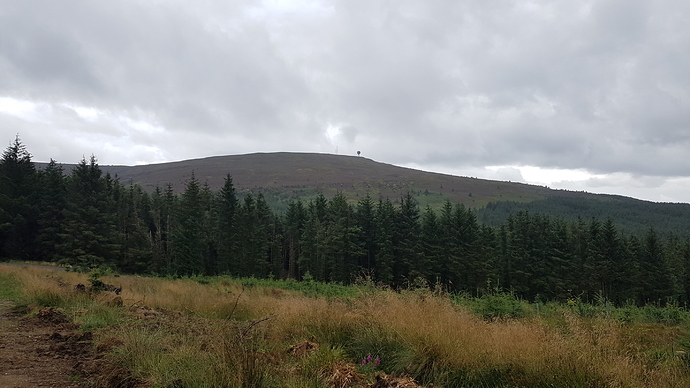 Around a 1/3rd of the way into the walk we came to a section cleared of trees and Peel fell, our goal, came into view. It was apparent that the weather, in all probability, was not going to get better. The summit was in low cloud and no doubt it was going to be very wet and windy on the top. The question is: would you have continued or even started the walk? 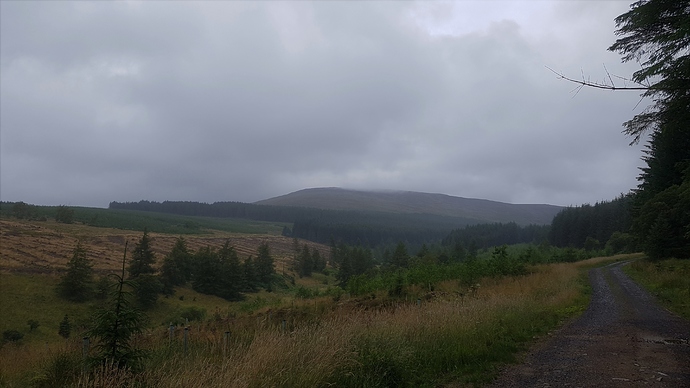 Now it would’ve been easy to call off the activation, gone back to a nice dry van, had a lovely cup of tea and a laidback afternoon watching the angry clouds fly by. But, despite the rain, and the steep climb ahead we were enjoying being in the remote forest and outdoors; we are both trapped inside far too often wishing we were outside so now was not the time to wriggle out of the undertaking ahead.

Just before the 3km mark the track swings from north-east to north-west where we were soon on the edge of a cleared area of forest to our left. A right turn at Rushy Knowe (not a zone in Fortnite; ask your kids) and we are on an ill-defined path through the trees again. Once out of the trees we turned onto the well-marked English/Scottish border path which climbs the hill; the path is actually on the Scottish side till after the final small ridge which we could tell by the border wall. The lower section was through knee-deep vegetation, which by now was soaked. Needless to say we got saturated from the knees-down too which eventually water-logged my socks; should’ve worn gaiters. As we ascended the weather deteriorated and the wind got stronger adding a bitter chill to the air; it became proper dreich. At the exposed summit, which we had reached in under 2 hours, the wind picked up but the rain had temporarily stopped to be replaced by a fine mizzle. There was a very small voice in my head saying “what are you doing here, you could be warm and dry and not out of breath”? I ignored this as I was out on a high place where I love to be regardless of the conditions. 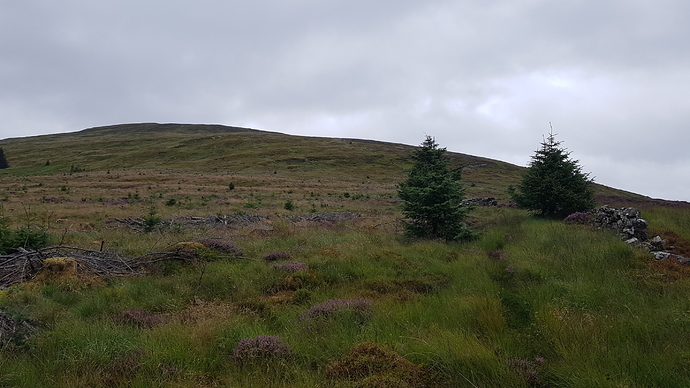 Pell Fell 3.jpg2851×1604 1.87 MB
One of the false summits as we climbed along the English-Scottish border (on the Scottish side)

After traversing a few boggy areas we reached the summit cairn and tried to find a little bit of shelter from the relentless wind. Setting up on the leeside of the cairn, the main priority was keeping the transceiver, amplifier and (the water adverse) Li-Fe batteries dry. We could get wet and we did. First the vertical was deployed then, carefully protected under a tarp, the transceiver and amp were set-up. A self-spot was sent and “CQ SOTA” calls made. Just after the activation got under way the rain came back; not the nice warm summer rain that we had earlier in our stay up t’north, but cold penetrating rain. We both hurriedly qualified and in a little bit of a lull in the callers I announced that we were going to shut down, adding a QRZ which then prompted more callers. To coincide with the mini pile-up the rain eased and stopped briefly so I continued with the activation. It wasn’t too long before the rain reappeared but by that time I was in full flow quickly working stations “contest style”. The equipment was staying dry and preforming well but we were getting even more of a drenching and gradually getting more and more chilled. In just under an hour of operating, 58 contacts were logged on 40m and I had started to feel the effects of the cold and I could feel the rain beginning to penetrate all but my coat. 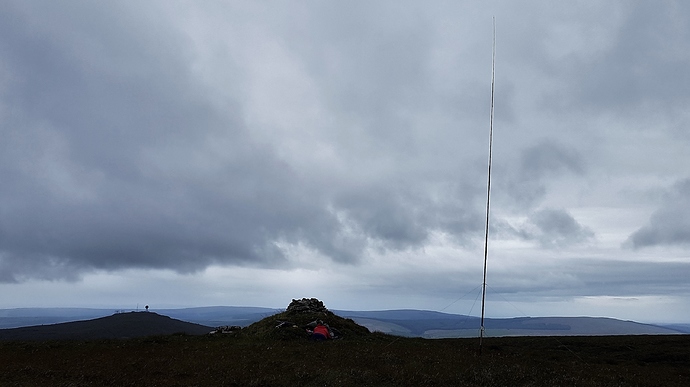 I was shivering and getting very uncomfortable, this was supposed to be summer! It was time to reluctantly abandon another activation due to rain (I would’ve loved to operate on more bands) and leave Peel Fell. By now gloves were needed; I had not been that cold for ages. Was summer over already? This was another activation where the band was open with plenty of callers queuing for a contact. We just couldn’t stay any longer as we had a long walk down and we were both feeling really uncomfortable. The walk back was uneventful and took half an hour less than the walk up. We both soon warmed up as we walked with even our sopping wet legs drying as we continued on the forest tracks under the trees.

Our last day of SOTA activity had come to an end with 5 summits activated successfully and 30km walked over the 3 days. We enjoyed staying in this remote area and the wild undulating landscape. The only thing that would have made it better would have been some drier weather!

Equipment for the 5 activations this trip